Just finished a large Cold War Commander game featuring my 15mm Old Glory Vietnam figures that were painted back in 2007 (that's my excuse for their poor quality LOL!)

I randomly put terrain out and diced for the start-point (SP).  US Forces were tasked with seizing key terrain and clearing out VC weapons and supply caches to erode their capabilities in the "Tropic Lightning" Area of Operations.

US Forces approached on foot from the South with 1 platoon of M48 (90mm gun) in support.  The Task organization was as follows:

1st Battalion, 27th Infantry (Wolfhounds) (minus)
BN Hqs
Command Stand
FAO
Bravo Company, 1-27 INF MAIN EFFORT
4 Stands INF
1 SPT Stand (HMG)
BN Command would travel with B Company
Alpha Company, 1-27 INF SUPPORTING EFFORT
3 Stands INF
1 SPT Stand (HMG)
FAC
M48 Platoon cross-attached
Roughly 1000 points.
The plan was simple.  A Company would advance via the "highway" towards the bridge / orchard complex in the center of the map.  B Company would advance to the left of A Company as far as the river, then swing right and meet A Company, thus clearing the jungle.
While B Company was slow to get going, A Company's armor and its 20cm movement sped off down the road without infantry support in hopes of securing the Bridge and the right side of the map prior to the end of the first turn.  The infantry, without any mechanized support, trudged on, using the road (first mistake) and were greeted by a horrifying VC ambush complete with automatic weapons, RPGs, and mortars.
The M48 Platoon was close-assaulted and knocked out.   2 American infantry platoons are pinned down, suppressed, and have taken bad casualties (hits) on the road.  A very dangerous situation is developing on the American right flank...

Bravo Company's movement to contact was not as eventful but the Battalion Commander was starting to lose his nerve.  Should they move to reinforce Alpha Company?  A Company didn't have alot of troops to begin with.  Their main purpose was to contact the enemy so B Company could swing in.  However the Jungle made progress slow.  To make matters worse, A Company could have used Artillery support, however the FAO was with B Company.  The targets for the "fast movers" were too close to initiate Close Air Support (CAS).
The VC move in for a massive close assault to destroy Alpha Company on the road, flush with success from their victory against the impetuous yankee tank platoon.  They succeed in pushing back the American defenders but this is their doom - with the withdraw of the Americans from the road and a command failure, they open the way for a FAC to call in fast-movers and an F4 is orbiting at 11,000 feet waiting for the call!  Despite AA fire from a VC command post in the rubble, the Americans pull their "danger close" card and are saved from disaster as 2 VC platoons are virtually annihilated by aerial bombs and strafing attacks along the road.

Meanwhile, on the left, action is heating up as a VC blocking force is destroyed in a firefight and B Company deploys.  While the FAO was supposed to engage with the Artillery, the tubes remain silent as B Company gains and maintains contact.  This wasn't part of the plan but B Company became decisively engaged and was forced to assault through.  They didn't have to wait long as they sprung the second VC ambush in the clearing on the map.  Things went wrong for the VC after this point however, as the Americans deployed smartly for both close combat and firefights with their platoons in mutually supporting positions. 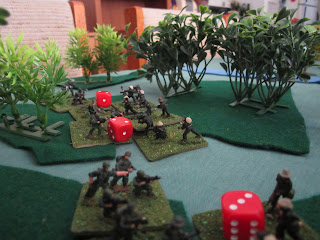 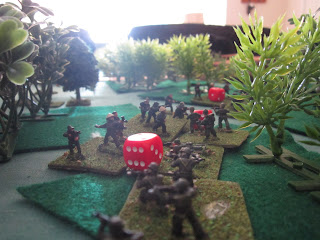 The VC ambush was discovered and superior firepower of the US Stands literally saved the day as each VC assault element became suppressed prior to its close assault.  The VC force hit its breakpoint and B Company broke through to the orchard on the last turn, turn 8.
Still however, with the destruction of the VC force opposing B Company, they kept rolling snake eyes for their breakpoint rolls and would not quit the battlefield.  With Alpha Company pulled back into the jungle south of its contact point, they provided a base of fire while Bravo Company swept through the orchard and reached the bridge.  The remaining VC elements called it quits at this point.
Learning Points from the Battle:
CWC, as always, is a great system.  I think it's realistic and alot of fun.  While I had some questions and had to re-fight some close combats after re-reading the rules, it's still a winner with me.
Artillery & Supporting Arms:  I need to deploy the FAO closer to the front.  If you aren't shooting artillery EVERY TURN when you have it available, YOU'RE WRONG!  He serves absolutely no purpose at the Battalion Headquarters and it's a waste of assets if not used.  The original plan called for B Company to gain contact, then suppress with Artillery whilst maneuvering my infantry around for a close assault.
On the VC side, the plan was to lure the American units into well-defined kill sacs, which worked on the road but not as well in the jungle.  While they purchased 2 minefields also, these should have been placed within the kill sac originally but were never entered by US forces as they were north of the river...
Additionally, the VC only used their 82mm mortar once!  This is an outrage and luckily the NLF Field Force commander was killed during the battle or he would have faced a court martial.
Combined Arms Combined Arms Combined Arms!  The "impetuous" armor came as a result of its 20cm movement.  Remember, just because you CAN move twice as fast, doesn't necessarily mean that you SHOULD!  Large sprints may work in NOrth Africa, the Sinai or Fulda, but they don't work in the jungle.  The Armor was there to assist and protect the infantry, eliminate strong points, and draw enemy fire, not to roll onto the objective without any infantry support.  Tanks get chewed up in this game without their "crunchies" having their backs :)
Close Air Support & AAA:  Money well spent.  I would purchase these assets again in a second.  That being said, the VC player should have purchased a AAA unit to supplement his ground defense as well as protect his troops. I had plenty of points to buy a 23mm cannon and should have done so.
Do I even have to mention the intelligence of moving my forces down a road, single file, in Vietnam?  :)
Great game and I was surprised at the outcome.  I thought for sure that the Americans would have been wiped out but there was a dramatic reversal of fortunes after the F4 Phantom strike.  Hoping the next time I play CWC it will be a modern-Iraq or Afghanistan game.  This was lots of fun and a great way to spend half of my day off!  HUZZAH!
Posted by Disgruntled Fusilier at 12:39 PM