Hey Everyone!
I played a modern crossfire game this evening (actually a couple smaller games trying to get the feel for the rules again and implementing some new concepts like IEDs and Fireteam-sized units.  The game takes place in a small urban area on the outskirts of Baghdad prior to the Surge in 06-07.  The fight is against Shia militias in Baghdad.

I took a ton of pictures and I'll showcase them all here on the blog.  Better put on your IBA and ACH - things could get a little dicey from here on out...
(by the way, if you want to know about my inspiration for Crossfire Rules into modern era wargaming, check out Matakishi's Tea House.  He gives a great 2 page methodology for tweaking Crossfire for moderns.  He also has resources for introducing IEDs into Crossfire as well as terrain building).

Game started out with the Americans entering the town from the Mosque Complex.  The American objective is to retake the town to include the government and police building from the Shia Militia of Moqtada Al Sadr's JAM gunmen.  The Americans field a platoon with a M1126 Stryker ICV in support. Each American stand represents a fireteam.


The Mahdi Militia enter the board and occupy the mosque.  They immediately begin firing at the American security on top of the government building.

A short but vicious firefight ensues between the Americans and the militia on the mosque.  Eventually the US Fireteam is suppressed and it enables militia men to flood into the streets down the tree-line street to fight the occupiers.

The Stryker Infantry Carrier Vehicle swings into action from its cover and the remote operated .50 Caliber machinegun opens up on the militia-men in the streets resulting in a KIA.  (one of my modifications for modern Crossfire is that the .50 always receives 4 dice even when firing at hard-stand brick buildings.  Given the quality of bricks and shoddy construction in places like Iraq, .50 caliber machine guns tend to penetrate more). 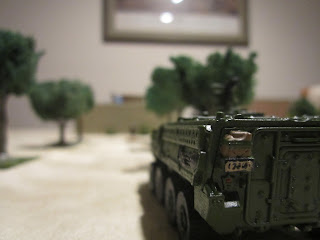 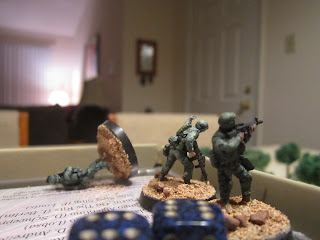 While the battle on the street is won, the militiamen atop the mosque are firing PKMs at the government building. An American fireteam is out of commission and a fresh squad moves up to take its place, eventually silencing the mahdi guns.

The remaining militia men pull out but the battle for Baghdad is far from over as the American surge heads into full swing...

What an awesome set of games!  Crossfire is still one of my all-time favorite games.  While for the modern era, I think the casualties are a little on the excessive side, for a battle of the scale represented, it might not be.  The Americans lost the equivalent of 2 fireteams or an entire squad but not necessarily all Killed in Action.

The ebb and flow of the action is great and gives the feel of modern day combat at its most desperate.  I switched sides and had the US come in from the mosque on the second round.  After 2-3 games of Crossfire, I'm beat but I have a few observations for the would-be modern infantry gamer to take heed of:

If you can be seen, you can be hit.  If you can be hit, you can be killed.  Crossfire models this superbly and you should choose a covered and concealed route for an advance.  Additionally, defending an objective by placing a unit in a terrain feature NEXT to the objective is a terrific idea, especially if you think it's out of sight of the enemy Forward Observer.

Tips for the "crossfire insurgent player";  small arms, SAWS, and crew served weapons are nice, but you need casualty producing weapons to defeat a modern, mechanized opponent.  The Stryker bounced around with relative ease and laughed off those pesky 7x62 rounds.  Had the insurgents had an RPG, IED in the first game, or a mortar, they could have had a little more flexibility and chosen when and where to mass their forces.

Smoke and HE Missions: As the US or modern mechanized player, purchase mortar fire missions and use smoke rounds to conceal your movement.  If possible, have your fireteams make smoke and use it to conceal rushes from cover to cover.  Could have worked wonder for game 2 when an entire US squad was mowed down during a dismounted patrol by an insurgent firegroup.

Hit the Dirt!  remember, anything you can do to lessen the effects of enemy fire, the better.  You can get your troops to "hit the dirt" and go prone.  THis simulates your troops taking advantage of anything they can find within their immediate vicinity.  It also subtracts 1 die from the bad guy's shot.

All in all, a very fun game that I think I will introduce some non-gamers to (who are interested in military history and gaming as well).  I had alot of fun making the terrain and it's not over yet.  I am going to print out some advertisement posters in Arabic and glue them to the walls of the buildings.  Also some Iraqi street signs as well.  Should be fun!  Next I'll be working on IED markers to place on the roads as well.

The Stryker turned out nice.  It is a 1:72 "Bravo team" stryker that I slapped a coat of testor's medium green on, as well as a grey/black wash and a sealant.  I also painted the water cans and put some crude unit insignia on. This M1126 is from the Army's famous 172nd Stryker Brigade from  Alaska.  The unit that spearheaded the surge (i was there at the time when those poor bastards were told they were staying BEYOND 12 months for an additionaly 90 to 120 days....)

Here's an interesting story also - the buildings are based off actual Iraqi buildings I've seen here and there.  My favorite was graffiti on a wall in As Samawah that said 'we will never submet' and yes, submit was spelled incorrectly.  You see that aptly modeled here.  Go ahead and make fun of the buildings with their crude marker-drawn features all you want!  The point was just to get some troops on the table.  I left the rest to imagination.  Look for more games, with more troops, complicated mission-sets, and more firepower!  Huzzah!

Posted by Disgruntled Fusilier at 11:39 PM