Greetings Everyone,
After a short hiatus I have finally gotten an ACW game in.  I played the Battle of Piedmont with Volley & Bayonet rules.  The Scenario comes from GHQ's excellent MicroForce ACW Scenarios available for free on their website.

Battle pits a Union Force against a roughly equal Confederate force to seize the town of Piedmont, West Virginia.

Make no mistake about it, this game was sharp and brutal.  It has been a long time since I played a good ACW Battle with Volley and Bayonet and the ACW games always turn into meatgrinders with improved small-arms, artillery, and longer ranges.  Surprisingly this battle turned out 180 degrees differently from its historical counterpart and in this posting, I will explain why!

Opening moves saw the yanks get into position.  This battle was 12 turns long and pitted 2 smaller Union Divisions against a very large Rebel division which would bring with it unique command and control issues for the Rebs when they needed reinforcements. 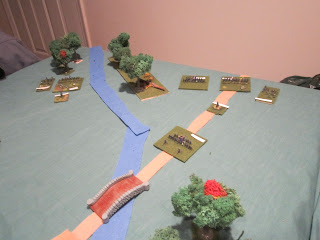 The Union advance through the valley would have to be cautious.  Both Divisions had very low (dangerously low) exhaustion levels of 5 and 4 respectively.  Essentially, if they lost 1 Brigade, the Division would make an exhaustion test.

The first 2 moves saw Stahel's Division attack the knoll to eliminate the Marquis Battery.  With its 1 Brigade out of place, they would not be able to go in with 2 Brigades, but 1.  Luckily they had Artillery support.  Here's where that battle got them...

Wyncoop's Brigade moved to flank the hill while the 5th NY Arty poured fire on them.  The fire was ineffective and unfortunately the Rebel Battery went Stationary at the end of turn 1, and mde its free facing chance to meet them, HEAD ON!!  So at the very beginning of the battle there would be a heroic Union advance through shot and shell to take out those guns via a frontal assault from hampering further advance of the main effort.

The Union Commander FORGOT that dedicated guns could fire in support as long as there was an open fire lane so I missed the opportunity to eliminate the battery on the first round of melee.  So Wyncoop's Brigade fell back.  Next turn they carried the position but the brigade was eliminated from horrendous casualties.  Stahel's Division reached exhaustion already!!  And it's second Brigade had not even been committed.
On the Union Left, the main advance was underway as Moor's Brigade crossed the river with Dupont's Battery firing in Reserve.  I am giving Dupont's Battery battle honors as they eliminated the Maryland Battery in a vicious long-range artillery duel over 2 turns.  They also were credited with shoring up the bridgehead for the advance.

Moor's advance moved swiftly across the valley, passing the wrecked Maryland Battery and engaging Jones' Brigade in melee.  They lost but by a slim margin.  At this point, I realized again that I could have had a fire-land open with DuPont's Battery firing in support.  It sounds simple, but so necessary.  It's an extra attack die you get!

The Reb's counter attacked with Harper's Brigade who was in the fenced in field.  They attacked Moor from the front and flank and it was pretty much "game over" for the lads.  I can only imagine what that carnage would have looked like in real life.  Makes me think of the railroad cut at Gettysburg, or worse, the Guard at the end of the Battle of Waterloo.  Mark Sullivan's Division with an E for exhaustion as well.


After Moor's Brigade evaporated, the battle was essentially finished at turn 8 of 12.  This was historically a major Union victory but in this instance, the scenario, in my opinion, wasn't set up properly for Volley & Bayonet.  I used the number of Regiments, NOT the end strength, to determine the composition of the Brigades.  The Union Brigades should have been bigger with possibly strengths of 5 and 6.

Additionally, the Rebels had a difficult time committing their reserves because everyone belonged to the same, happy Division, with an exhaustion level of 9!  I have never seen a Volley & Bayonet Division that huge before.  When the battle ended the Rebs had committed 1 fresh Brigade from the Reserves South of Piedmont.  I was able to pull Harper's Brigade out of the fight to guard Piedmont incase of an unthinkable Yankee breakthrough but there was simply not enough Union troops to go around.

So how did this battle go?  Well it was a wonderful, brutal little fight that I will play again with updated end-strengths and I will make more use of the Confederate Generals present at the Battle, instead of having 1 overall Division Commander, I may assign one of the Brigade Commanders locally as a Division Commander, and make "Grumble" Jones the Corps Commander.


FIRE LANES:  There is always something to say about Artillery in Volley & Bayonet.  I think by assigning a Battery to each Yankee Division, I was able to maximize firepower, neutralize or destroy enemy artillery, and participate in close combats and firefights with my artillery.  Unfortunately that was an expensive, 3 turn lesson I learned.  Wyncoop's Brigade would have taken the position with a Stationary Battery firing at close range in support, but I forgot about the supporting artillery rule.  I did eventually learn by turn 5 or so...

FIREFIGHTS:  Remember in Volley & Bayonet you don't always have to charge.  I think I may have posted this before too.  You can enter into Firefights with the enemy, which was common to the period as well.  Not as many were killed with the bayonet as you make think.  The Union Forces were faced with a larger number of Confederate units who could sit back and take casualties (sounds ironic and I can't believe I just typed that, but it's how the battle went!) while the Union could not afford to lose a single Brigade.  It was an interesting problem to face as the Union commander for a change.

Fielding a Stationary Post-Napoleonic, improved small arms Brigade equipped with Rifle-Muskets you get lots of dice for shooting and there is no forced retreat for losing either.  So it behooves you to advance slowly, with artillery support, and attack the enemy by fire as well as maneuver.  This is probably one of the most important lessons anyone who plays Volley & Bayonet can learn!  Melees can go badly for you if you roll bad.  In my case, these are GW dice and they make them so all the luck runs out in about a year or so, FORCING you to buy more :)


My compliments to Dave F also, who painted the majority of my Rebel troops on the table today.  Miniatures are 6mm, primarily Adler but there are a few Baccus units in there for good measure.  Dave, I hope I have done justice to your incredible painting skills!  Your troops performed magnificently.  Anything here that looks crappy, it was most likely painted by me.
Posted by Disgruntled Fusilier at 12:16 PM