Played a defensive scenario at Salerno today taking place on "Black Monday" 13th September 1943.  This action saw a large Kampfgruppe from Battlegroup Kruger attempting to drive a wedge between Allied beachheads.  This action depicts a powerful German infantry battalion with armor support trying to seize a ford and drive south.  I'll let you determine who you think won the battle...

You can see elements mostly of Battle Gruppe Von Kruger here however the Pnzr IVF2 is from the Kleine Limburg group.  Conducting an armed reconaissance towards the American positions, KG Limburg discovers the bridge is out and heads for the ford.  Meanwhile, the ford is guarded by American Artillerymen in light, improved positions, and 1 platoon of Shermans.

The Americans attempted to attrit the Germans along their advance by throwing 155mm shells at them the entire way, however they failed their cohesion rolls multiple times and ended up figuring out at the last minute that they could alternate firing batteries of 155 and 105, thus ensuring Steel was raining down EACH Turn.  This didn't happen like that , however Artillery was able to garner about 90% of the casualties against the Germans by the end of the game.

The Germans forced their way slowly (no halftracks yet )  up to the ford and made it without any significant casualties from American artillery fire thanks to the bad rolling. 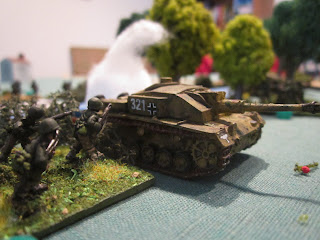 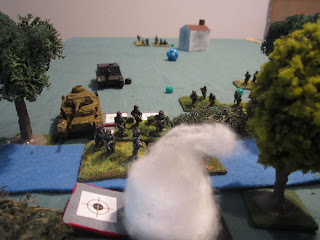 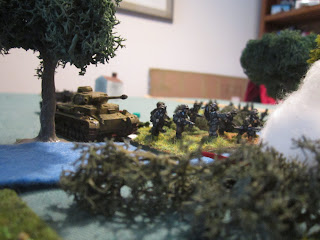 However, the Germans starting bunching up at the ford and that's when the American artillery fire got better.  The Americans were able to call in a "duration" fire mission on both sides of the ford with 155mm HE as the lead German elements were coming across.  (by the way, 2 knocked out AFV platoons effective block the ford from fire).

2 German infantry and 1 German Stug III platoon managed to make it through as the Artillery was falling.  My US redlegs close assaulted the Stug but did not manage to do much to it except suppress it.  Next turn, with final protective fires falling on the riverbanks, the Germans on the US side of the shore were forced to fight it out with the Americans.  1 German platoon knocked out the US platoon close-assaulting the Stug, while the other German platoon engaged the right US platoon with fire.


The German commander made a stupid move and tried to move his reinforced company through the ford.  (Halftracks would have been critical at this juncture) and KG Limburg lost 75% strength in one turn from US Artillery.  Lesson learned.

Next the Germans successfully moved a Panzer IVF2 platoon across the river ford with  no issue.  They over-ran the remaining US units on the far bank.

The fight was over.

The final analysis - I'm not sure who won - the US Artillery fire would last the duration of the game (from turn 8 all the way to turn 15 so the remaining German infantry could not get across at that point).  So on the far bank, the Germans had 2 AFV Platoons and 2 Infantry platoons.  1 more loss and the Germans would have forfeited the game anyways.  I think the US team bought some time and because of the scenario constraints, 1/2 of the German units would not be able to exit the map.

LESSONS LEARNED:
Halftracks retain their defensive value when moving in GHQ's rules.  So - if you dont want to get chopped up by artillery fire - use halftracks.  On the same token, if you're the defensive player and really want to multiply your combat power, artillery is essential.

DONT TRADE ARTILLERY FOR CLOSE-IN SUPPORT OR ASSAULT GUNS!  I made that unfortunate mistake and traded in my 150mm Artillery for a Self Propelled 150mm Assault gun.  My thoughts were that I could keep out of line of sight of the FOs until I got to the ford, then I could blast the US platoons to hell.  Didn't happen that way.  THe sIG pretty much remained suppressed/disorganized the entire game until it rallied and attempted to cross the river.  It was blown up in the process...

The Germans could have used that smoke to suppress the Americans on the far bank instead of only having 1 stand of 81mm mortars.

Forward Observers should always travel with the main element.  In this case I had them back at German HQs...

I need more anti-tank and transport for all of my armies to make a difference in engagements.

Lastly, if you have an armor-weak force, you should conserve your armor.  Instead of pulling back my vital Sherman platoon, I brought it forward and it was cut to ribbons by the Germans with their accurate AFV fire...  Should have placed them farther back to counter-attack and act as an insurance policy against breakthroughs.

Here is a link to the Scenario from GHQ's page.
Posted by Disgruntled Fusilier at 3:01 PM