Finally played a large game of SHAKO (original version) in 6mm using my Adler DJD painted mini's on my bases.  I shortened the battalion sizes to 2 stands as well the Cavalry to 1 large stand.  Roughly 1 large British division facing off against 2.5 French divisions  (more like Brigades) and a large cavalry "division."  French were tasked with seizing a village on the British right and a farm on the British left.  I played the long-way on the table and this time I got a decent feel for the rules mechanics.

By the way, I had no so-called "experts" or rules subject matter experts with me so please excuse any mistakes I might have made with the rules, and go easy on me! 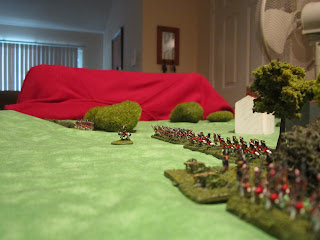 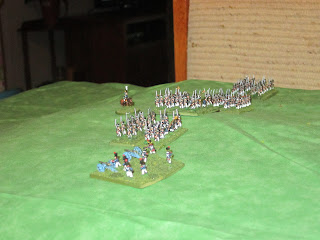 The French came over the hill, very heavy on their left and using their full Cavalry Division on their right.  The purpose was to skirmish and knock-out the British Cavalry unit that was screening the British left flank.  In a miracle (Shako is conducive to miracles every few turns when the dice are with you) 1 British Cavalry Regiment turned back 2 French Cavalry Regiments and sent them in Full Retreat!

I moved the British light Battalion up the ridge to some woods to skirmish with the French and force them to deploy.  The game would have been much more satisfying if I would have painted up some Voltiguers to protect the Ligne troops as they marched forward!  Alas, an entire French Battalion deployed to "deal" with the skirmishers after receiving 1 kill from a lucky roll.
The French surged forward and were able to stay on track without any significant orders changes.  The British gunners held their fire until the last possible moment, ending in disaster for one very unlucky French Infantry Battalion.  On the British left, a charge by impetuous British cavalry left the French with command of the field.  This game, it seemed like every time a Cavalry unit charged, it was doomed!    I also enjoyed the blown cavalry and reorg rules.

The British moved a light battalion up the hill to occupy some advantageous terrain and interrupt the French deployment.  This worked.  Sort of - I did force one French Battalion to deploy to deal with the skirmishers.  Meanwhile the rest of the attack stayed on track.  Would have been better to deploy more skirmishers to really upset the timetable but I learned for next time.

LESSONS LEARNED:
USE YOUR SKIRMISHERS IN SHAKO!  Probably sound advice in any Horse and Musket battle where skirmishers have the ability to be represented.  They are dynamic in Shako and actually quite dangerous seeing as how they can't be over-run.  You can use your skirmishers to score hits against opponents and weaken their capabilities before the actual big battle is joined.
REMEMBER TO HAVE SUPPORTED LINES!  Troops with supported flank lines receive bonuses in combat.  Shako leaves alot to chance and combat is by no means a "foregone conclusion" so you have to take every advantage that can come your way in the "close fight"
BRING THE GUNS WITH YOU If you can bring your artillery along your advance to set up close to your enemy's lines, it's much easier to achieve a break-through.

Overall I have to say that I very much enjoyed Shako.  I'll admit that I'm treading lightly in the review because I know Arty Conliffe has an almost cult-like following in terms of devotion to his rules.  I'll further admit that I am a member of the Crossfire Cult myself.  That and I own every Spearhead Supplement as well as the rules so I have some license to talk.  So with that said, let's get into it.
Shako allowed me to carry out my plan(s) on the tabletop and was a flexible system.  Even with the command system it still enabled me to react to moves on the tabletop.  I probably could have mentioned the command system in the battle, but was just focused on the battle itself.
While there are many abstracts in Shako, it was still a satisfying (read satisfying as FUN) game that handles many of the complexities of Horse and Musket wargaming with a marked elegance.  I love the unit morale rating and how that handles a myriad of situations.  It took me a few turns to figure out "kills" vrs "staggers" and the whole volley fire-flank lines thing.  Shako is ideal for large battles and unlike other tactical games, it doesn't get bogged down if you take on a larger formation.  My advice to new Shako players is play with alot of units, however, because if you are hedging your bets on a die roll, you could be out of the game quickly.  Shako delivers on most of its promises in the Nappy department and while the rules aren't Arty's best written rules, they do have excellent explanations on the mechanics.  I have many questions about the rules in certain obscure game situations, but I think time and playing with some more experienced guys they will be answered.  This game was simply to digest the core mechanics and learn the rules.  Next time I will take on more complicated situations.  Huzzah!

Posted by Disgruntled Fusilier at 7:38 PM