Just recently finished the second battle of my Kharkov Campaign featuring elements of the Soviet 15th Tank Corps facing off against the infamous 2nd SS "Das Reich" forces.
Using the Blitzkrieg Commander Campaign builder system, I fought the second battle in the campaign today - this battle was a "bridgehead" scenario and boy what a nailbiter!  The Soviets outnumbered the Germans by 2.5 to 1 and featured 2 tank battalions, a heavy tank company, and 2 small infantry battalions attempting to over-run the Germans' small pocket.
If you look at the terrain SouthWest of Poltava in the Ukraine, you'll notice strange tributaries and marshy areas that intersect the landscape.  I used this to the advantage of the Germans who set up in narrow corridors, forcing the Soviets to deploy and attack down pre sighted avenues in an attempt to break up their forces.
The Germans only had 1 mech company in 251 halftracks, 1 Tiger I platoon, an a PAK 40 platoon along with 2 batteries of 105mm Artillery to hold off the hordes.
Here is another kicker - I used GHQ's WWII MicroArmour rules, modified for 15mm (add 1/4 to range, sighting, and movement). 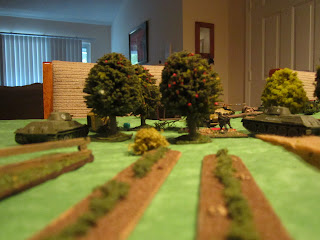 MAN what a fight.  This battle may have gone the Germans' way if I had deployed them smarter.  Looking at the map, I figured the Reds would have deployed right in the chutes but it didn't work out that way.  The Soviet player decided to get close in and fast in order to pin down the German infantry.  It worked, even though he suffered from the super responsive and accurate German Artillery fire, he was still able to push Gerry from the fenceline and his improved positions and grind all the way to the treeline and the German command post.
LESSONS LEARNED
Well this battle really had almost everything except air power.  The Russians hastily organized this attack so not even a round of artillery was available for them although I suspect that had they some 122mm artillery or even mortars they would have been able to sweep the Germans alot easier.
That being said here are some things I could have done differently (and, for a change, some things I did RIGHT!)
Task Organization:  The Russians had a horribly low cohesion value - 11 - that means to carry out any action they had to roll an 11 or lower on a 1D20.  The Germans had an awesome cohesion of 16 and found that most of the time they could carry out their orders as required.
If you have a low cohesion or Command Value even in BKC, it's adviseable to form larger groups so when you do carry out an order, you have more stuff that can shoot or move.  The Russians split their task org right down the middle, which was a great idea.  The tank support in the collective farm really helped as did the mutual infantry support there.  Additionally, it was nice on the Russian right flank to have infantry support there to hold the ridge once the tanks got into position.
Mobility:  From past games, my infantry got shredded from artillery fire while moving into position.  Now with those super-fast half tracks you can move your infantry around teh battlefield much fast, and now you don't need big HMG platoons since you have on-board systems on your half tracks.  Half track mortars would have been really nice too - but that's something I'll remember for next time.
deployment - if you know you're up against larger forces, try deploying them echeloned with mutual support.  The PAK 40 could have done wonders covering the withdrawal of my infantry from the fenceline.  Instead my infantry were decisively engaged too soon in the battle and half of my platoons were gobbled up knocking out Russians.  1:1 kills is great but not on the Ostfront.  Your hard-pressed troops need to survive and kill at least 2 stands before you can afford to lose them.
Also - my Tiger I could have been positioned in a much better spot to kill more Russians earlier.  i kept him out of range (can you believe it?!?!) of the Reds until they were both mutually in range.  That negates the Germans' incredible gunnery advantage with the 88mm main gun.
FINAL ANALYSIS
This one went to the Russians - but just barely.  What an awesome game.  Once again, GHQ's rules are crisp and elegant and they are perfectly suitable for large games like this one.  The only beef I have is they are not the greatest for solitaire games like the ones I mostly play.  Reason I say that is there are alot of simple rules that you end up forgetting about since there is alot to do and keep track of.  Playing with other people keeps you more honest (ie the GHQ range (modifiers) and cover rules were conveniently ignored for turn after turn by accident) also forgetting if he attempted to fire or not.  I think I need to use my Crossfire NO FIRE markers...
So next turn will see the Germans fighting for control of the bridge again now that Ivan has kicked them West across the Dnieper.  Not sure when I'll get to play that one but it should be another epic clash!  I am not sure, at this rate, if the Germans will ever reach Kharkov's suburbs or not!
Posted by Disgruntled Fusilier at 3:28 PM