In continuing my theme of "plastic domination" - I present 3 new "brigades" for Volley & Bayonet.  Specifically, the Battle of Talavera from the "Road to Glory" rules set.

Bear in mind, I've based these guys on a 1/2 Scale compared to actual Volley and Bayonet.  1/2 is nice because the math is easy.  16" movement rounded down to 8"  Unit size from 3" to 1.5" etc.  It's been my experience that as long as the ground scale stays true to the base size, you can have a very entertaining and historically accurate game.

These will be French from various corps.  The Grenadiers are the "Royal Spanish Guard" Grenadiers and are, I think, the only "shock" troops that the French field.  I took some poetic license and gave them Green coats, as at first, I thought they were staffed with Spaniards.  Not totally sure but they look great!  Seriously, I'm not one to toot my own horn, but I think the Grenadiers turned out very well.  I'm sure they'll be mercilessly cut down by British musket and cannon fire or mowed down at the Pejar Redoubt but that's what it's all about!


I also included some surprises, like my French Corps Commander holding a map or orders, as well as the Legere unit I painted last week.  Additionally, I've mounted the Voltigeurs and they look cool...and menacing! 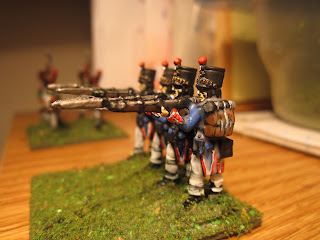 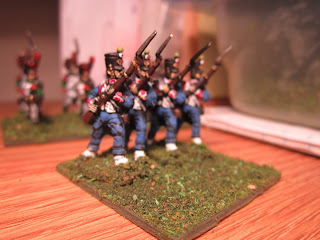 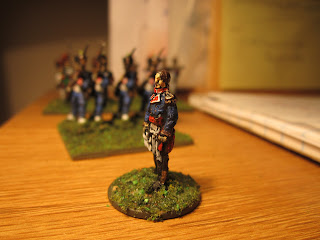 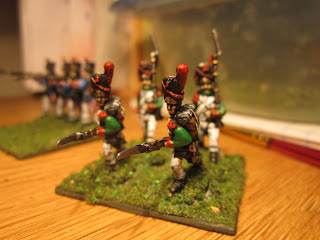 Next up will be some British line units, a Portuguese unit or two (not even sure if the Portuguese fought at Talavera but the figures are neat), some French Artillery, and of course the Spaniards.  I'm using the HaT 1796 Frenchies, but will give their bicorns a 90 degree turn on their heads and also will paint the troops in white uniforms of the Estremadura Regiment.  Looking forward to it!

Posted by Disgruntled Fusilier at 10:15 PM