My annual Halloween Warmaster game was played a little early this year.  To avenge the ruinous loss of Rattenkrieg's mighty army last year (see Rattenkrieg's Demise) the Empire dispatched Lord General Maybach Krupp von Kiestermacher to settle "the Orc question in the North" once and for all.

This host included large infantry and missile-troop brigades as well as a battery of cannon, and a squadron of heavily armored knights.

Meanwhile, the Orcs, having had plenty of time to prepare, built an artillery machine of their own, a rock lobber, as well as additional archer regiments, and a "volunteer" goblin regiment to bolster their forces.  There was even an "October surprise" in the Orc force...a gaggle of hideous and huge trolls.

With somewhat similar forces, the Empire men met the Orcs once again in rainy and soggy conditions on a moor north of middenheim.

Orcs set up first.  The opponents diced for sides...

So the battle starts out bad for Kiestermacher and the Empire.  The Orcs win initiative and manage to roll lucky and knock out the Great Cannon battery with some lucky shots and some volkswagon sized rocks.  Some of the crew are unfortunately pulped...

The orc horde surges forward.  I forgot about the rule (again!!!) where the General issues orders last.  Well needless to say the gobbos and missile troops on the Orc left flank do nothing.

The Empire plan is simple: Form a wall around the main Orc infantry and pummel them with incessant handgun and arrow fire while the infantry move in.  Meanwhile the Empire knights will attempt to flank the Orc main body and attack them.  The Empire needs every unit, bolt, and arrow it can get as there are hundreds of orcs in front of them.

So my Empire troops are shooting much better than last year up to this point.  The Orc horde is driven back and loses actually a couple stands as their crude armor is no match for the bolts and hot lead....

The trolls meanwhile just continue to get angrier and angrier.  And the goblin and orc archers on the orc left still may not move... 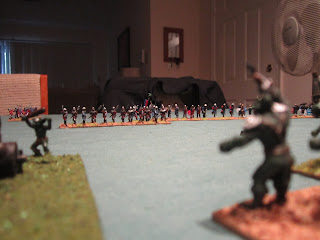 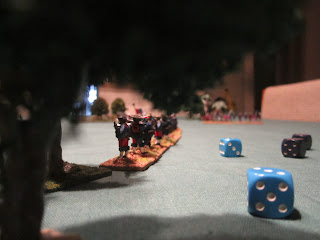 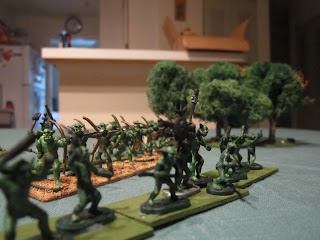 So a small wildcard unfolded these next few turns.  The Trolls caught a glimpse of the empire knights and broke ranks to attack them.  I have never gamed WM with either Knights or Trolls, so this was a fitting engagement for both of them.
The trolls drove the knights back in a few rounds and lost a few of their own as well.  Eventually the knights couldn't hold on and evaporated.  This bought time for General Kiestermacher to send a regiment of swordsmen to attack the trolls from behind while they were eating the fresh horsemeat and picking the armor out of their teeth.

I was very surprised but the swordsmen cleaned up the trolls and slayed all of them, but not before they were up to their waists in goblins with orc arrows flying everywhere.  This heroic regiment was wiped out by arrow fire but will be remembered in Empire lore for decades to come as "trollslayers"


So the Empire egged out a victory but just barely.  Had they had some more infantry on the table, it would have been a sure bet.  What a fun game though.  I am getting the hang of Warmaster and find it to be a very fun system and one that handles ancient styled combat very well.  No wonder WMA is so popular.

I must read last year's battle and see if I really did learn anything this time around.

PROTECT ARTILLERY:  If you can, set up your artillery cleverly so it is facing where you want it to face, but everyone on the battlefield can't see it.  If in doubt, put it behind another unit.  The Empire Artillery was wiped out before ever firing a shot.

CONSERVE STRENGTH:  I thought keeping infantry together in mutually supportive roles was helpful and productive.  The extra numbers you get from supporting stands are very helpful in determining the outcome of close combat.

USE MISSILE TROOPS EVERY TURN:  If you aren't shooting every turn, you're wrong.  The Orc Rock lobber was forgotten about after it crushed the Empire cannon crew, and never fired more than a few rocks the rest of the game...That being said, the Empire handgunners and Crossbowmen really knocked out a bunch of Orc stands over the game's course and were really the heroes of the game in my opinion.

USE YOUR TROLLS TO SPEARHEAD YOUR ORC ATTACKS: They discard odd hits during close combat and attack with 15 attack dice per unit.  They are juggernauts and nothing in the Empire arsenal save for a steam tank can come close.  (i refuse to build the steam tank or purchase one.  Orcs and trolls are about as fantasy as I'd like to get).

Final Thoughts:  Once again, a very fun game with a terrific way of handling combat.  I have actual Warmaster and Kallistra stands I'd like to one day paint up and game with, but to be honest I thnk the look of the 1:72 chaps is nice.  The trolls are D&D miniatures and they look nice on the tabletop as well and how about the PRICE of 1:72 plastics and D&D miniatures?  I can assemble very nice armies all for under 30 bucks a piece, which is hard to beat considering it would cost me 30 dollars jsut to build an Empire infantry brigade (4 units of 3 stands each).

So there was my Halloween battle.  If I'm up to it, I'll paint up some more Orc and Empire units and play another one.  Right now I have a unit of Chaos Infantry on the table for Warmaster 20mm which I think will look really awesome when I'm done with them.

Posted by Disgruntled Fusilier at 4:04 PM