While I played the second round days ago, I am finally posting part II of my epic, Rules-a-palooza that I started last week.  The second round saw the same forces play the same scenario but using Pete Jones' excellent Blitzkrieg Commander Rules (first edition).

BKC handles fog of war in a slightly similar manner as GHQ (similar being they involve die-rolls).  You have to beat your command value or less on 2D6 in order to carry out your commanders intent.  It's just like Warmaster - in fact many of the same concepts brought over and as skeptical as I once was - I am here to tell you it works.  So well in fact that I own Blitzkrieg Commander, Cold War Commander, and Future War Commander!

So in BKC there is alot of die-rolling.  Alot of it.  So much in fact, that in a solo game, your wrist starts to hurt from all of the rolling.  I'm like "Jeez- ANOTHER US fire mission huh???"  So BKC, while fun, is not for the lazy or faint of heart.

Things don't go well for the Germans at all.  They can't seem to get off the hilltop, even with a 10 Command Value!  The US Player fairs better, and moves out to take control of the valley. 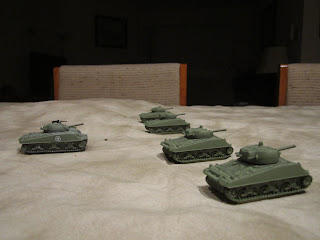 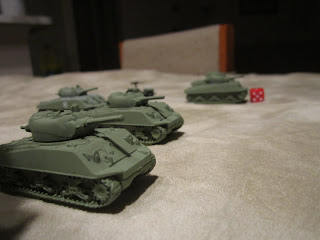 So the game degenerates into the US player firing at the Germans, with the Germans spending most of the game suppressed.  in BKC, you end up becoming suppressed easily and can do nothing for your turn.  So the US Player was able to garner enough hits to suppress, but not enough to wipe out the Panzer IIIs.

This game was a draw.  The Americans would have had to close with the Germans to get the kind of casualties for a decisive victory.  Gunnery alone won't do it!  You need ground-pounders to go in and finish off the bad guys.

So let's start on the review.  I'm a little hard on BKC in this review, but don't take that to mean I don't love the rules set!!

BKC's sequence of play is easy to grasp and fairly straight-forward.  There is an initiative phase, whereby players within initiative distance of each other may react by conducting movement or fire at the enemy.  Next there is a command phase, where players roll their command and headquarters' command values or less to carry out orders - those orders being shoot, move, or deploy.  As I said, it's straightforward.

Movement in BKC is very fair and generous with most mechanized moving 20 centimeters.  Given that you're "likely" to at least issue one order per turn, you will most likely move 20 centimeters.  That being said, it's possibly to move multiple times if the dice are with you and the stars align.  There is also an opportunity fire possibility to consider as well, but use it sparingly because your own firers can become suppressed themselves and fatigue themselves OUT of action for their next turn!!  (truth be told, I have very rarely used OF unless things are going very badly for me in a game).

Firing is great, although a ton of dice rolling.  You can have as many opportunities to shoot as your command dice allow.  You can see where good battlefield leadership and staff coordination pay off - an HQ with a command value of 9 must roll a 9 or less to carry out an action, with a -1 penalty each consecutive turn.  (There are also other penalties as well, but the purpose of this paragraph was firing!)  So imagine, rolling 9 dice for 3 tanks firing.  Then having to roll saving throws for every hit you score, THEN rolling for suppression or fall back each time.  When you play solo alot, it gets old.

Firing is adjudicated the same for all combat types.  Targets in open terrain hit on a 4 or better on a 1D6, in rough terrain and light positions a 5, and a 6 in complex terrain.

One thing I love about BKC are the close combat rules.  Infantry, the unsung heroes, get the glory and are truly the "Queen of Battle" like they are in real life.  No other unit gets as many attack die in close combat as the infantry do.  True they have no saving throw, but they can sustain 6 hits as well so they're tough.  Additionally, you must have infantry on the objective to capture it in BKC - a nice touch.

First of all, I don't like BKC's Quick Reference Sheet for the first edition.  I wished it had more processes on it but I do understand the desire to keep it simple.  That being said, I am a moron and had to flip through the rules constantly to learn and get the hang of the concepts all over again.

BKC doesn't have engagement tables per se.  It has a universal engagement system that works similarly for all combat types.  That's cool because it means less fiddling (in theory) with the rule book and more time rolling dice and killing the enemy.

The flow is fast, really fast if you know what you're doing, but it's painfully redundant.  I worked hard to suppress and try to kill the enemy's tanks from both sides, but at the end of the turn, when hits are discarded, it's tough when you have to start from zero hits all over again.  I guess what I'm trying to say is combat events are not wholly decisive.  Not until you introduce infantry and close combat.

The movement and ground scale is in perfect harmony and balance with itself, but is somewhat abstracted or so it feels like.

BKC's point system is much better than GHQs and is frankly much easier to put together scenarios (and the website has a terrific program that allows you to create your battlegroups and print out a data sheet already constructed for you!)


One Brain Cell Effect/QRS Explanations: BKC 1 Stars out of 4Tables: 1 Stars out of 4Realism: 1 stars out of 4 - there is much abstracted and left to the die.  Maybe too much for this linear thinker to process.Combat Model 4 Stars out of 4Game Process / Flow: 4 Stars out of 4 for "choppiness"Fog of War: 3/4 stars for the force command valuePoint System: 4/4Scenario Design Simplicity: 4/4Overall Grade 22/32!  There is much abstracted in BKC and that doesn't earn it the stars on the review.   That and I don't like the QRS.  But you'll see I rated Pete's combat model at 4/4 which is the most important.  BKC is a light-hearted and excellent rules set that I will continue to play, and also encourage others to play.  Heck, BKC didn't get beat much by GHQ, and it's a hugely popular rules set on both sides of the Atlantic.  If it wasn't, it wouldn't have such a huge following.  Also, my ratings can't be that great, because GHQ consistently receives poor ratings for the veracity of its rules.  There was still no grade for "fun" however and BKC remains my second favorite World War II 1:4 Battalion / Brigade level Wargame rules set.  Huzzah!

All in all, I recommend BKC for Club Play and larger battles - not as much for solo play, especially with larger games.


Posted by Disgruntled Fusilier at 10:29 PM