Played my second "proper" game of Arty Conliffe's "Shako" today with my 20mm troops and it was a smashing success.
Shako is a Napoleonics (and Seven Years War) game that allows you to take command of a quite large force and it retains a very decent tactical and operational flavor.  It has wonderful simplicity also.  I can't stress enough how simple it is and I love it.  I will play many, many more rounds of Shako, and since my troops are so darn photogenic, you'll be seeing all of the pictures of these games!

Today's fight pitted a very large French Division of 5 Battalions of regular line infantry, 1 Battery of Foot Artillery, and 1 Cavalry Regiment against a British joint Division of 2 regular line infantry battalions, 1 Foot Guards Battalion, 1 Foot Artillery Battery, 1 Portuguese Battalion, and a small Skirmisher unit of lights.  Can't forget the mounts either...The British were lucky enough to have a small regiment of King's German Legion Cavalry and the French had a Regiment of Cuirassiers.

The British were charged with defending a narrow pass with an impassable hill anchoring their right.  So the French had to go right through them...

The French plan was simple.  Advance and smash a hole through the British line and pour the second line into the hole.  The British plan was equally simple.  Stand here and don't let any Frenchmen past you.

The French advanced into the British shot and cannister early on.  Since my table isn't that big, the French found themselves tasting grapeshot almost as soon as they cleared the rough terrain.  Their Cavalry took some casualties early on and so did their skirmishers as you can see by the red dice in the pictures. 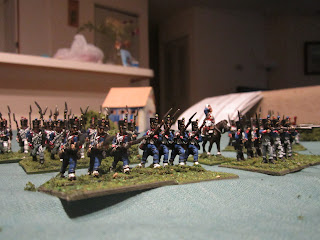 The French used their cavalry as bait, keeping at a safe distance from small arms, but also soaking up cannon fire as well.  The threat of Cavalry on the flanks of an infantry position is always going to give an enemy ground commander pause.  At least this is what monsieur general was thinking..

Once their Infantry were within musket range of teh British, the French launched their Cavalry Regiment at the same time the British launched the KGL at the Artillery.  The French Cavalry were repulsed with losses while the French artillery battery evaporated.
By now the infantry closed with each other and the musketry began in earnest across the line now.  The British skirmishers were driven back by French formations and would not rejoin the fight. 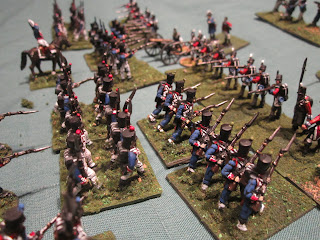 The first melee does not go the French's way at all.  The 2 lead Battalions are cut to ribbons by the British musketry and the British are still holding on.  This is where the French Artillery would still have come in handy.  2 French Battalions are sent to the rear with casualties.

The second line moves into the assault and gets teh job done.  While the Guards are sent packing from a bad roll, the first British Battalion evaporates on the British left.  The center Battalion is still holding strong next to their artillery, which is, at this point, fighting for its very life.  "Time to get the Portuguese chaps in the game eh?"

This sends the British line reeling.  They assault with the KGL to plug a hole but it doesn't work and the KGL  retreat.  The British division must not conduct a retrograde to a smaller hill behind their initial position.  The Guards have already rallied and have occupied the hill.  The British Division commander begins the retrograde movement but knows the Artillery's going to be lost in the process.  There are too many swarms of French infantry around the guns now...It's only a matter of time.

Posted by Disgruntled Fusilier at 12:44 AM