Fulda Gap: The Battle of Obergeis AAR PART ONE

Things continue to go badly for NATO.  It's day 3 of the war and Obergeis has fallen to the 79th Guards Tank Division.  The good news...if there can be any, is that intelligence confirms that the 79th has been pulled off of the line due to losses.  They are down to 1 effective infantry battalion and less than 1 tank battalion.  American losses from the battle have been grave.  Task Force 1-32 Armor is being rolled into 1-5 Mech for the time being.  1-5 Mech will be pulled off the line and the Germans will assume blocking positions west of Obergeis.  The battle of the Fulda Gap is over - the Soviets won the first round...
I finally played a game of GHQ's Modern Micro Armour Rules.  For my first game, the rules played a little choppier than their WWII cousin, but all in all, it wasn't bad.  Being a modern set, there is an awful lot to manage, however, and the immense capabilities that each unit brings to the table makes the game alot longer than the WWII one as well.  Which is odd as modern war is alot faster.  That brings up an interesting philosophical point about the nature of modern warfare and the ability to manage information and data....alas, that's for another blog.

This battle was so big that I will have to break up the posts.  Today you will read about the American and Soviet positions, and the initial shots that were fired.  Tomorrow I'll try and post the rest along with my lessons learned.  I literally can't wait to play this scenario using the Cold War Commander rules, as I have played numerous modern battles with them before, and, in my opinion, they play alot faster.

Soviet lead elements make contact with the US scouts on the Soviet right.  On the Soviet left, they move very quickly up my small dining room table to the crest of hill 442 and are met by a wall of US Artillery fire.  It is at this point they move into the forest and deploy on-line to wait for their sister battalion to advance with them.  That proved to be a good decision as the unfortunate left battalion soaked up all the tank fire and the second battalion on the right was able to continue to advance and fire. 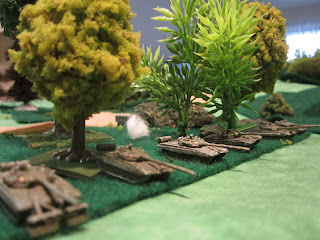 Once the Soviet attack commences, US Armor has a field day and within the first 2 turns after contact, the Soviet Armor battalion on the extreme Soviet left is virtually annihilated.  This is due in no small part to the Artillery.  Unfortunately for the Americans, they would never mass their artillery quite so effectively again.  The US force found out a few things in the opening stages of the battle:


Hard lessons for the yanks to learn and it cost them an entire M60 Battalion and most of an Infantry Battalion.  Tune in tomorrow as I go down to the blow-by-blow and the lessons learned from the rules and gaming perspective.

Once again, I think I need to play this using Cold War Commander.  Decisive results much faster.  Or maybe I just need to play this with more people - that would help keep track of resources, rules, and other stuff I ended up forgetting here.


Posted by Disgruntled Fusilier at 2:22 PM