As promised, here is the second segment of my AAR from yesterday's battle.  It seems all over the wargame blogosphere, NATO forces are giving ground grudgingly but the war is far from decided yet!

From where we left off yesterday, Soviet Armor on their left burst through the woods along the E45 Autobahn, and on their right, against Unteregeis.  US 155mm Artillery did some great work suppressing the Soviet Armor coming towards Obergeis and almost half of the Battalion was knocked out by gunnery by the end of the second turn.  Unfortunately on the US left, the Artillery had no such luck and the Soviets bounded from tree-line to tree-line until they were formed and ready to pounce on the TF 1-5 Battle Positions. 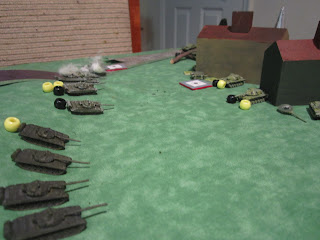 I had higher expectations from my TOW launcher platforms, and from my Dragon missiles, both of which failed to knock out a single Soviet tank yesterday - leading to a crucial lesson I'll talk about later.

Anyways, the US Commander made a fateful decision to move a reserve company of infantry over to Obergeis as the Soviet units were too close and it looked like they were close to being over run..
Hindsight is always 20/20 and in retrospect it seems I should have kept the infantry in position to defend Unteregeis as the extra stands close assaulting would have kept additional Soviet Armour and Infantry teams away from the town.

So the Soviets over-ran Unteregeis and the Soviet #2 Tank Battalion on their left still made slow progress towards Obergeis, even in the face of good American gunnery.

Meanwhile, 3 US Infantry Platoons in Unteregeis attempt a close assault at Russian Armor in the town.  I also found out that it would take approximately an entire US Company to knock out a Russian tank platoon by close combat, and my force was spread too thin.  Anyways, that ends in disaster as well for the US forces, who would keep at it, pinning down 3 Russian tank platoons for almost the rest of the game but not really accomplishing much more.

By now, Artillery is falling everywhere.  The US Player uses his Final Protective Fires to try and block the Soviets from moving anywhere, and the Soviet player is using his artillery to suppress or neutralize the Americans wherever they offer any resistance.

The American counter attack on the Soviet left is doing well, and I use the M60s great mobility to circle around behind the Russians and start taking flank shots.  The Russians had to divert a tank platoon or 2 from the drive on Obergeis but it was pretty much too late.  I could barely afford to take any American losses at this point so it's good bye 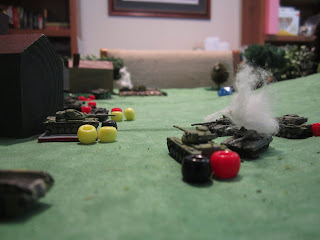 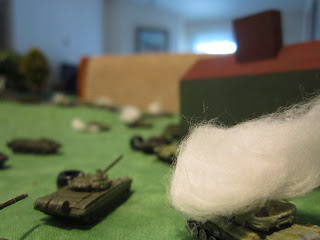 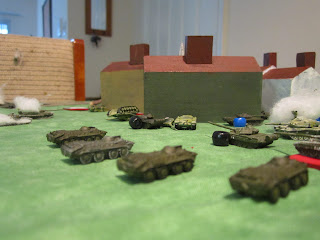 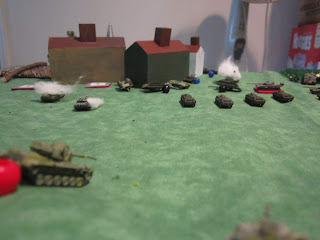 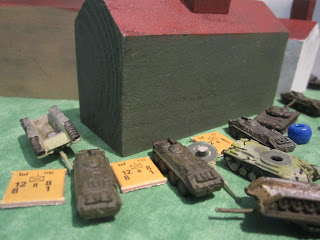 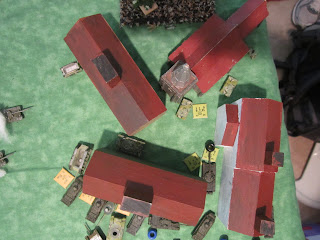 LESSONS LEARNED:
Well there isn't much I can say that you haven't garnered already.  Those 4 key lessons I bulleted in yesterday's post (AAR Part 1) really ring true.  This is not WWII and the tanks are much more armored, more heavily armed, and are not as easy to kill with frontal shots.  In GHQ, units only retain 50% of their armor values from the flank.  With the lethality of the systems, flank shots are much more promising so with that in mind:

MAKE YOUR SHOTS FLANK SHOTS:  Your man-portable ATGM systems have an Anti-Tank value of roughly 14 in 1978.  The T72's frontal armor is 15 meaning you make an attack on the "-1" column.  If you are able to get a flank shot in, your odds increase greatly.  The defensive value halved and rounded up is 8.  14 - 8 = 6 meaning your dragon attack launches now in the "+6" column on the combat results table.

USE ARTILLERY IN CONJUNCTION WITH GUNNERY: Your fires must reach out and touch the enemy, if possible even before tank gunnery starts.  You saw how easily the US M60 Battalion took out the lead Pact Armor Battalion in the first 2 to 3 turns.  That was due in no small part to the Artillery and its helpfulness in suppressing the armor before the shooting really got started.

INFANTRY CLOSE ASSAULTS NEED AT LEAST 3 OR 4:1 LOCAL ODDS TO SUCCEED AGAINST ARMOR: While it was great slowing the Russians down in Unteregeis, it made little difference in the long run as they were still able to extricate some armor to attack Obergeis.  Infantry kept back for counterattacks need to have good odds of surviving.  Close assaulting enemy armor is always a tricky proposition, and if the armor survives, you're gonna lose those M113's (your transport) before the day is done, but you've accomplished the mission.  In this case, I assaulted a tank platoon with only 2 infantry platoons and the defender fires first...which brings me to the next point:

USE ARTILLERY FIRES IN CONJUNCTION WITH CLOSE ASSAULTS: Had the Russian armor in Unteregeis been suppressed or disorganized already, the infantry would have made short work of them, however my artillery was being wasted elsewhere trying to kill stuff that was harder to kill.  Granted, there is a risk to your own infantry with danger-close, but going in "cold" without prepping the objective is just begging to fail your close assault.


Finally - I was really taken aback at how ineffective my own ATGMs were in this game, especially versus the Pact ATGMs (AT-5 launched from a BRDM2 platform).  If you can manage it, knock out those little suckers ASAP.  They have more reach than the T72s and are much faster.

In hindsight, I should have placed the infantry Battalion in the town with some Armor supporting them in company teams.  (2 tanks and 2 M113s?).  Infantry dug-in in towns is much harder to hit than infantry dug in in woods.  Not to mention the Armor could have counterattacked easily after the Pact Battalion was dispatched and their infantry in BTRs destroyed.  It was an expensive lesson to learn and while the Red offensive grinds on towards Frankfurt, I'm hoping NATO can recover....

Next up will be the Disposable Heroes: Seek Out, Close With, and Destroy Supplement scenario with British Reserve Forces and German Armor counter-attacking at Hameln to capture a key river crossing from Soviet Airborne Forces.  This is a skirmish battle using the DH: SOCWAD system.  The Scenario comes from Ralph Peters' "Red Army" and is laid out in the excellent World War III Scenario Book "The Bear Marches West."  British and German Forces will need to capture the Bridge from the Soviets and their Battalion headquarters.  World War III Urban Fighting at its ugliest!

Posted by Disgruntled Fusilier at 9:23 AM