Played the first turn of a pretty sweet Disposable Heroes (seek out, close with and destroy) World War III Scenario pitting a modern (mid 80s) British platoon against a Soviet Airborne platoon.  The British platoon is conducting a "zone recon" against approaches to Hameln to counter attack the Weser Bridge crossing.  This is the first game in a series to re-take the Weser crossing from the Soviet airborne. 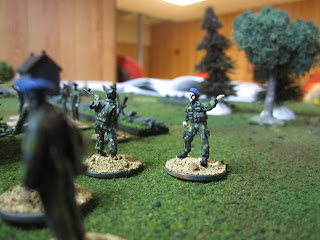 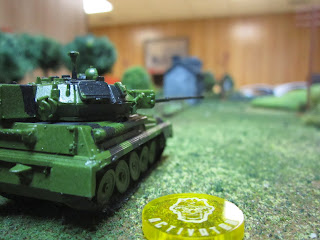 First shots see the Scimitar crew pin down the Soviet scouts and the British fireteam finishing the job by knocking out a scout.  Oddly, they fail their morale check from the Scimitar's fire but PASS the check from the small arms even after taking a KIA.  What was it Winston Churchill said about the Russians??
The RPG-16, I was hoping, was going to knock out the Scimitar but only serves to piss off the Brits.  The rest of turn one is alot of maneuver.  Most of the Airborne troops scurry into better firing positions and defensive positions while the British approach.  The Brits are moving up into their attack positions.  The British have GPMGs and alot of firepower to bring to bear.  The Soviets have the manpower.

The rest of turn 1 ended pretty quietly as teams stealthily move into position and that's a wrap for this round!
Gotta love Disposable Heroes.  Another of my "old, worn shoe" rules that fit well, feel right and deliver a cracking good time.  Next post will be the next few turns as the British attempt to move up and seize the post office building.  Huzzah!
Posted by Disgruntled Fusilier at 8:48 PM