Age of Eagles Action! Quatre Bras (or something like it)

So maybe I didn't necessarily play Quatre Bras, but certainly a more scaled down version of it using the popular Age of Eagles rules based off Brigade Fire & Fury.  This was a great game full of dramatic reversals of fortune on both sides.  I love the "reserve movement" table you roll off, I love how melee is handled, and frankly I can't believe I haven't played this game sooner.  (I've owned it for 8 years now...)

Game featured the French attacking on a narrow frontage to secure a small village in the Dutch or Belgian countryside. 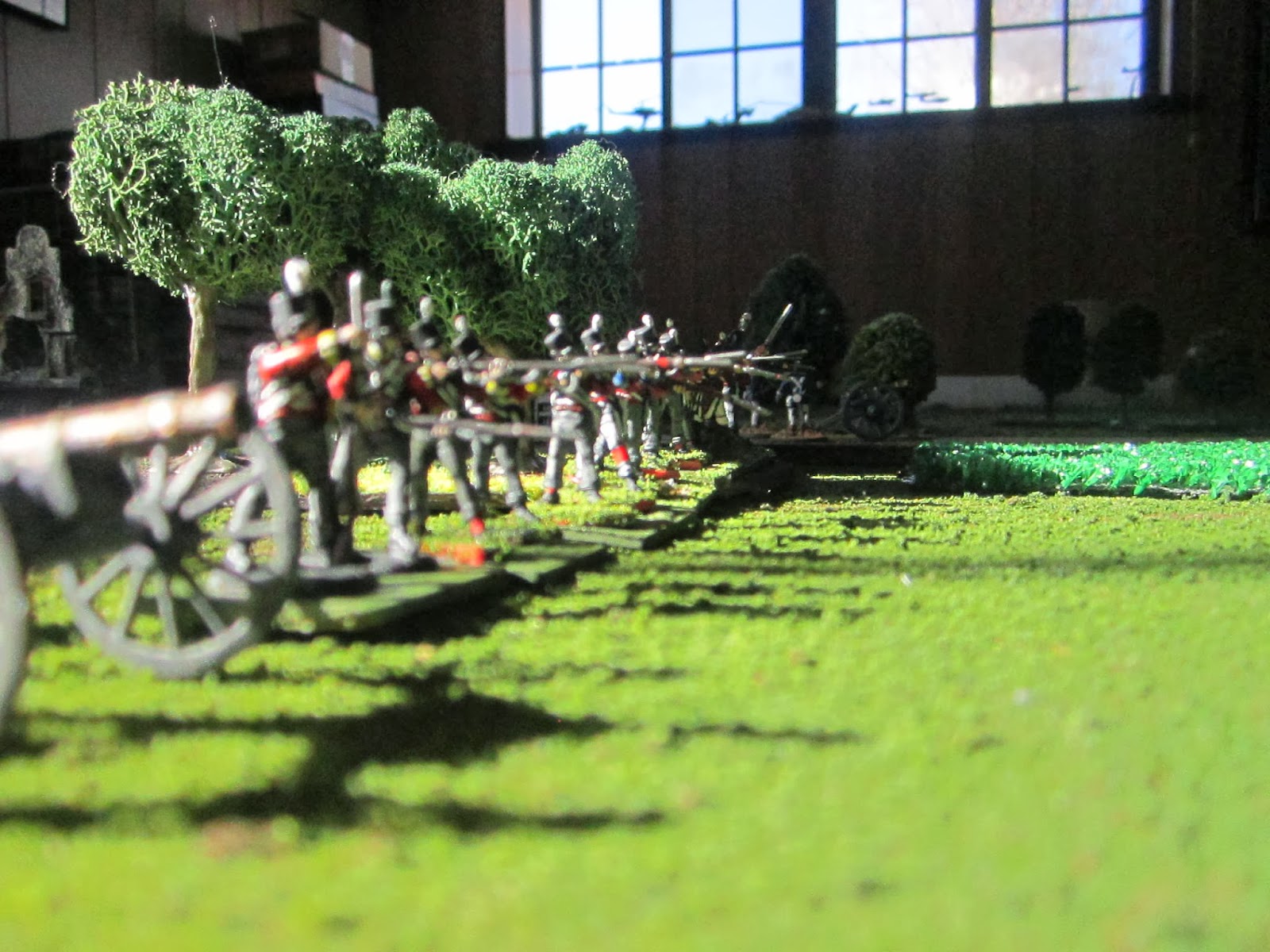 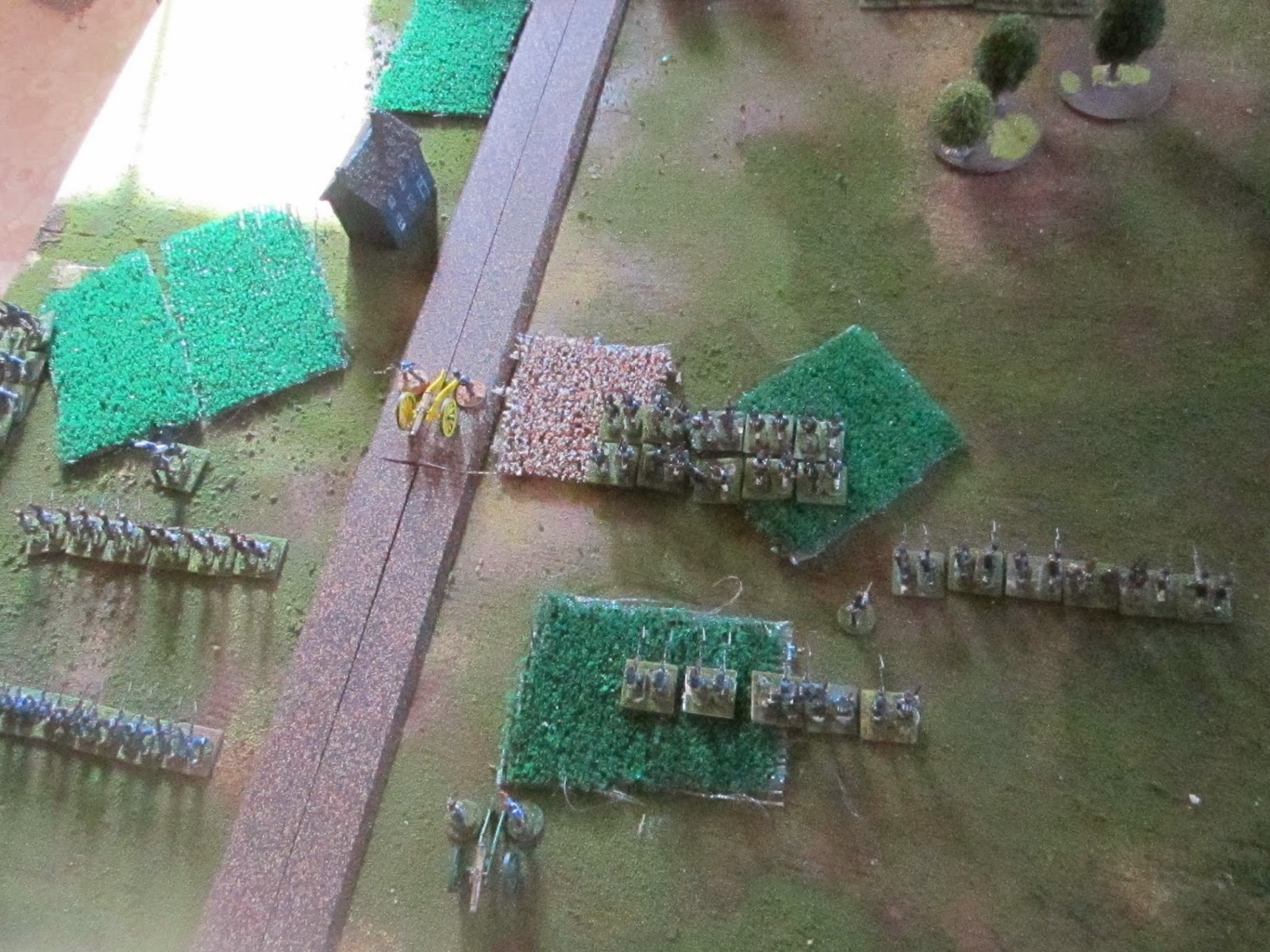 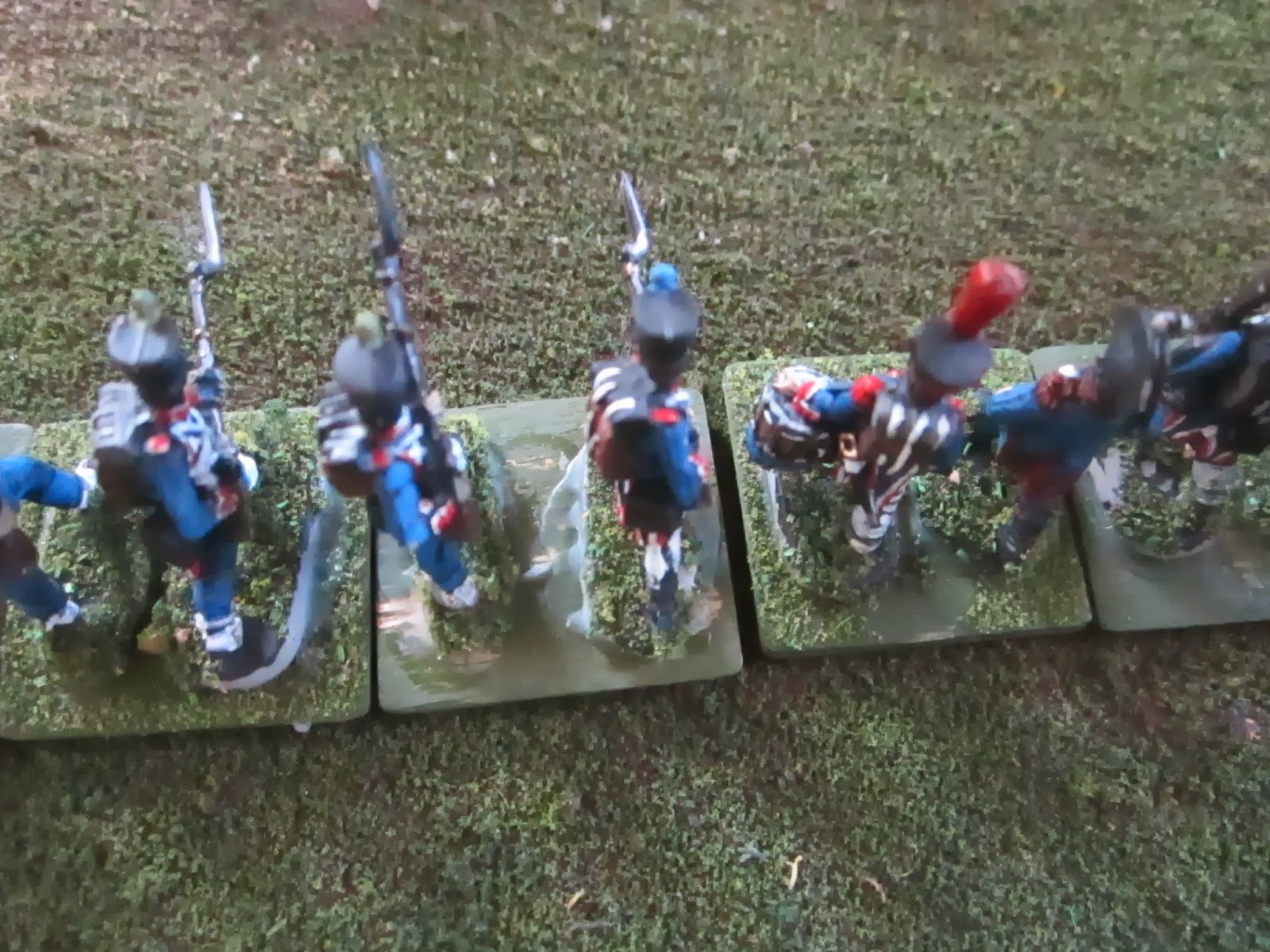 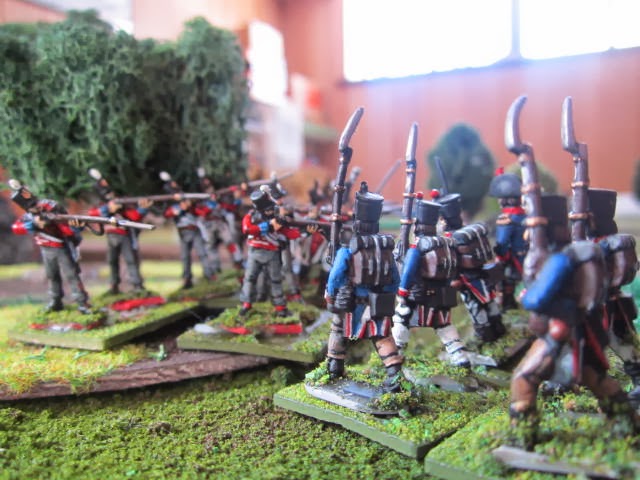 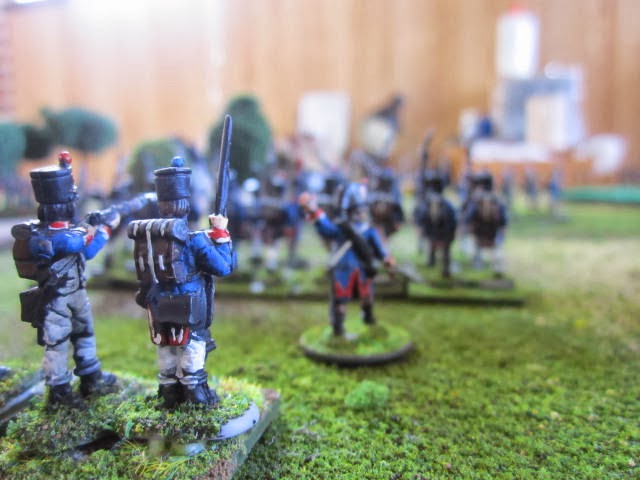 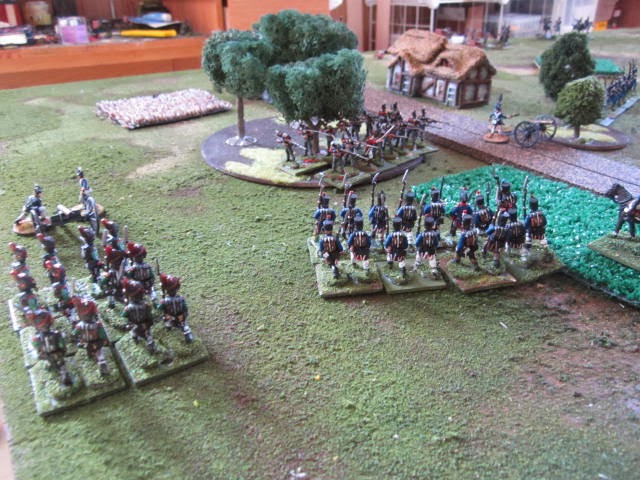 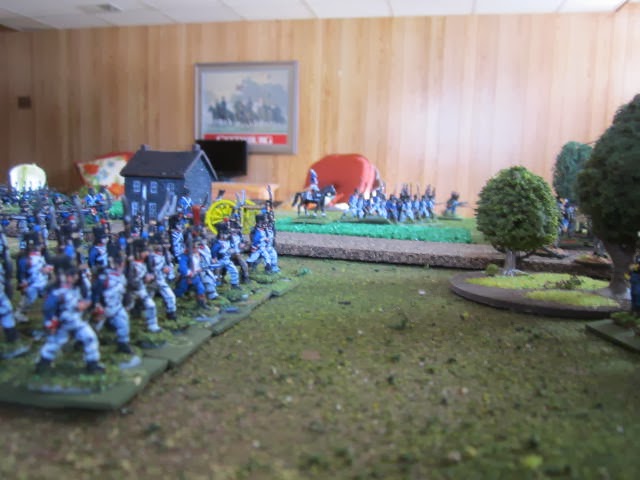 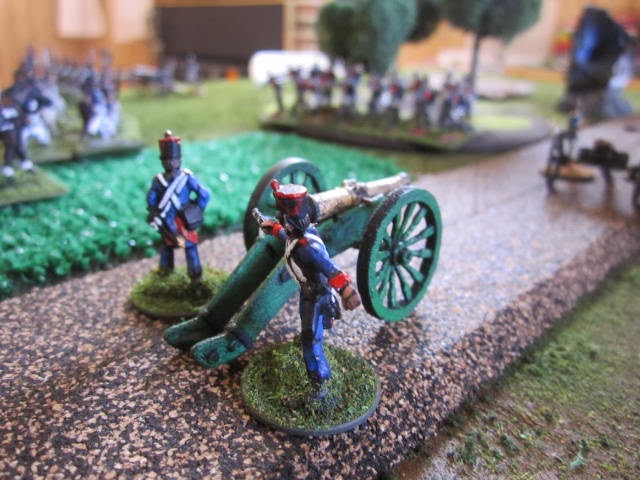 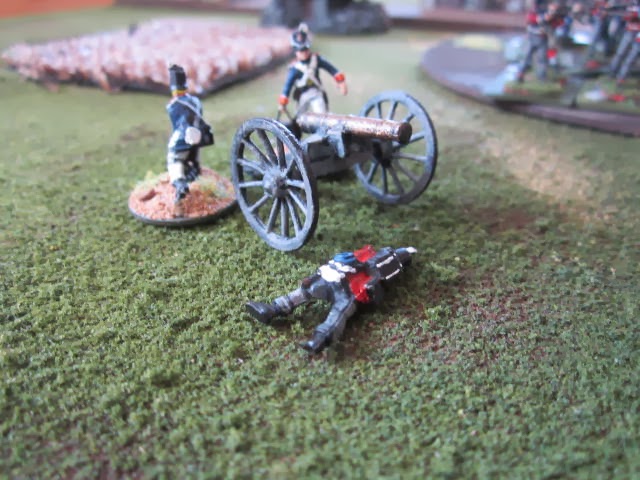 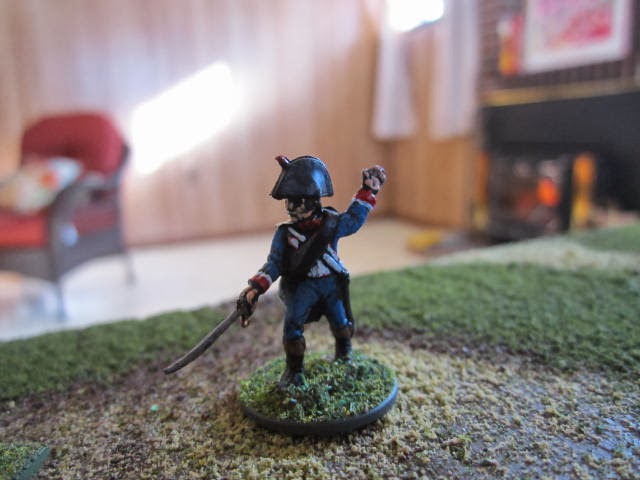 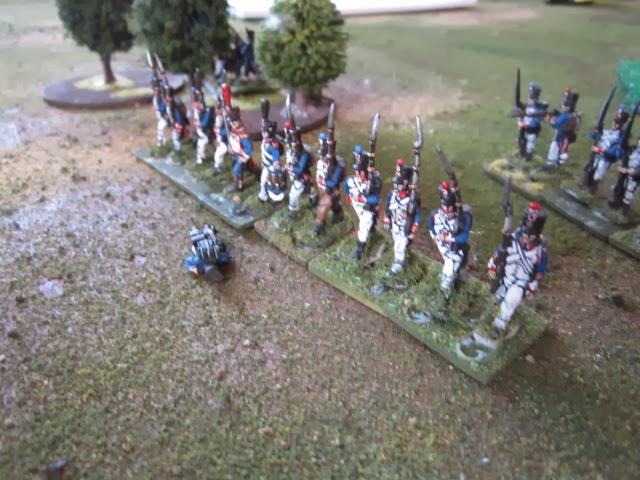 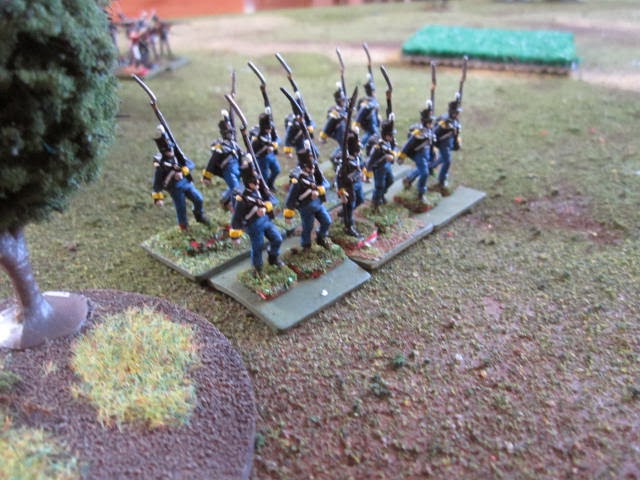 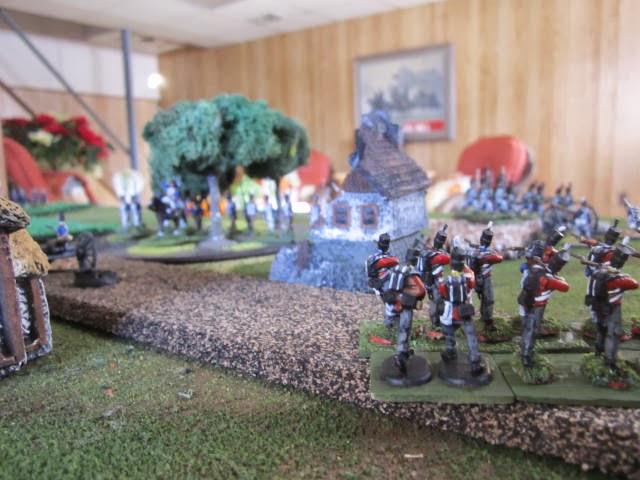 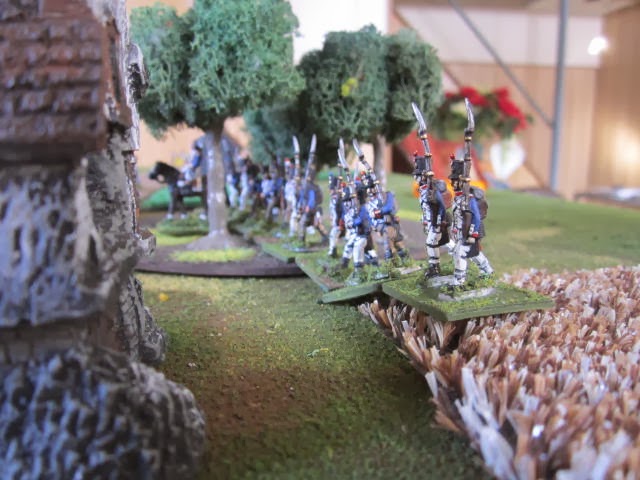 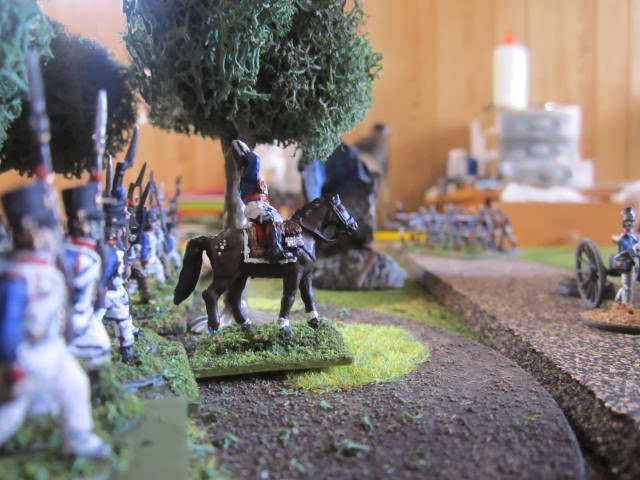 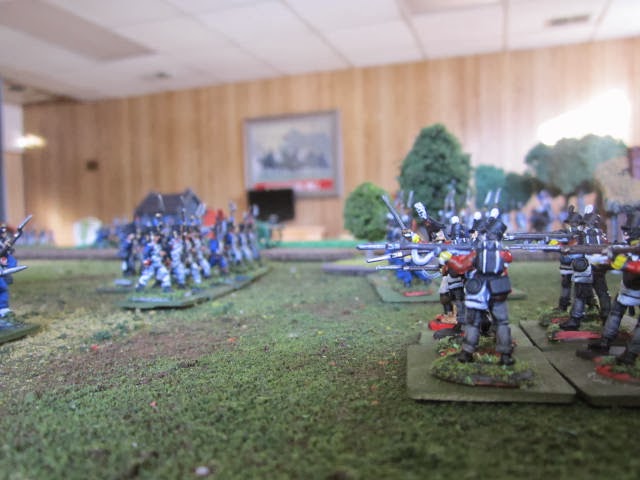 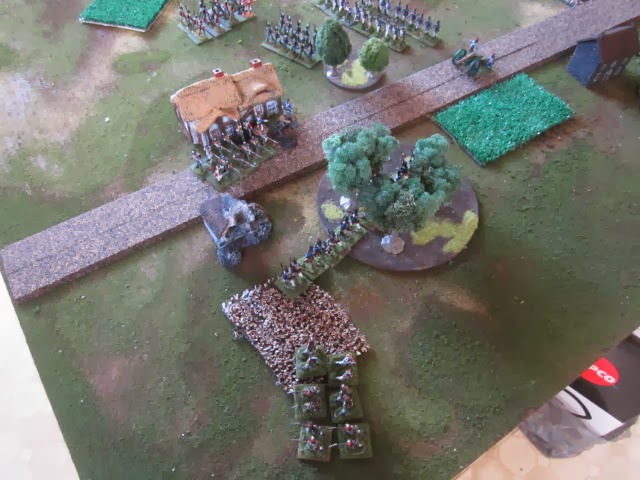 If you've gotten this far then I applaud your tenacity!  Sorry for the long post and abundance of pictures but that's what you get after an all-afternoon Napoleonic romp!  This battle was great fun and the result was constantly in question.
If anyone wants to know - technically, the British won the battle.  While points-wise it was a draw.  The British made 1 French Brigade worn and captured a Division Commander.  (2 points, 1 point each).  The French destroyed a British Battery (1 point) and made 1 British Brigade worn (1 point) so a total of 2 points to them.  That leaves the ultimate objective which was to defend the village.  The British ended turn 12 with a worn brigade in the village, about to receive an assault from 2 French Brigades.  In the British commander's head, he was about to throw in the towel and order a retreat.  Holding on until the end of turn 12 kept things in suspense until the final turn, in which everything rested on a French assault that never actually came.  How many stories in history can we think of where tired units were in similar situations?  You can't make this stuff up!

LESSONS LEARNED:
It was a great afternoon for Napoleonics and Age of Eagles delivered on all the promises on the back of the rulebook.  The Reserve Movement introduces a great fog of war feature and true to form, my Chasseurs never committed to the battle and actually ended the game still in reserve status.  The Fire and Fury/Age of Eagles system is SUPER easy to learn and easier to play.  I barely had to consult with the rulebook and the entire game was played off 2 sheets of paper (The QRS located in the back of the rules).

So given my ringing endorsement, what were some lessons we learned today?

Artillery Support:  Keep your artillery moving with your assaulting brigades if possible.  You technically can't move, unlimber, then fire but you CAN have them available if things go south in the combat.  Your brigade may be forced to withdraw in the face of the enemy and if you've brought guns along, you will have "final protective fires" the enemy will have to march into next turn.  This would have been helpful on the light division's advance on the French left.

It's not over yet!  In Age of Eagles (Fire and Fury) just because you lost a combat and were pushed out of a position it doesn't mean you've lost the battle!  in some other games, units do not have the ability to absorb punishment and recover as a viable fighting force.  The British were kicked a quarter of the way across the board but still (technically) won the game.  So solid tactics pay off in the face of bigger numbers.  Forcing the enemy to attack you slows him down and buys you time for your reinforcements to come up.

Expect the unexpected:  Who would have thought a small Dutch brigade would hold out against unbelievable odds, Twice?!  Just like on a battlefield, anything is possible in Age of Eagles and I like that.  With the tables, there is literally no such thing as a "typical" result.  You have to fight hard for victory just like in real life.

I will play AoE again!  Huzzah!
Posted by Disgruntled Fusilier at 4:16 PM