Played a straight-up, smash-mouth infantry battle today with an American Airborne Battalion and some support elements (57mm AT Gun Platoon and a Battery of 75mm Pack Howitzers on-call).  The "Screaming Eagles" were up against a regular German infantry Battalion with a few surprises of their own like a self propelled AA platoon and a panther platoon, along with some truck mounted infantry.  This was a fun game and a real nail-biter.  What is it with units failing their initiative test ALWAYS when you need them to pass it most!

The Germans garrisoned the village, farm fields and woods in the right of the picture.  This is D+1 and a consolidated paratroop battalion is tasked with seizing the village due to some item of military significance such as a cross-roads or enemy communications center.  Regardless, our fearless battalion commander has a job to do...

The US player is "elite" and also has the "Assault Troops" special rule meaning they hit in close combat on a 3+ (elite) and can re-roll missed hits in close combat!  Deadly!! 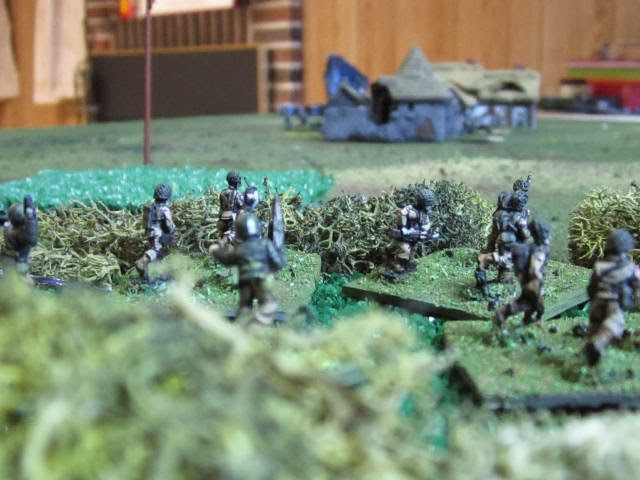 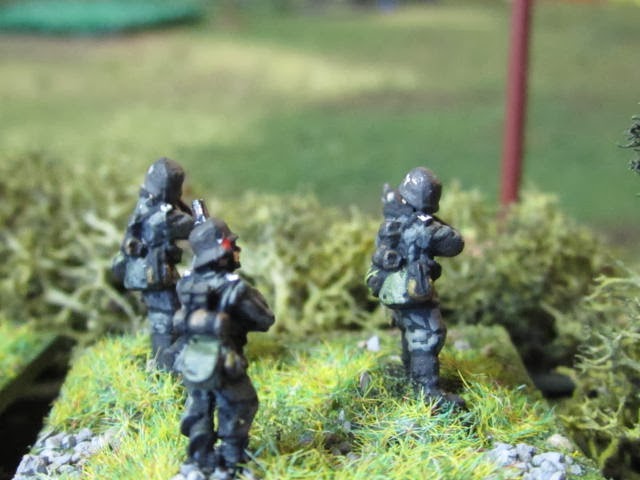 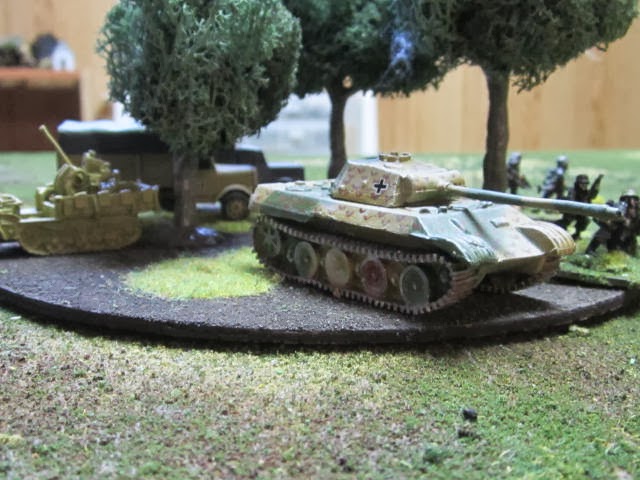 The US player immediately sees a problem with the location of his AT Gun platoon as the sound of tracked vehicles comes rumbling from the woods to the south!  They'll have to ensure that gets sorted out!  Also US player moves into the farmhouse buildings along the roadway to cover the blocking position. 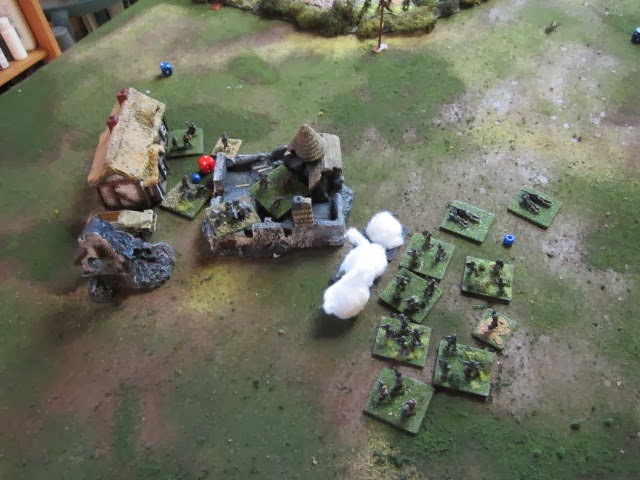 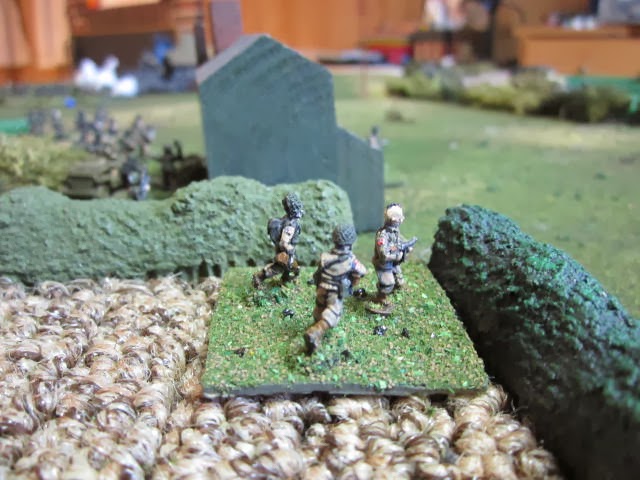 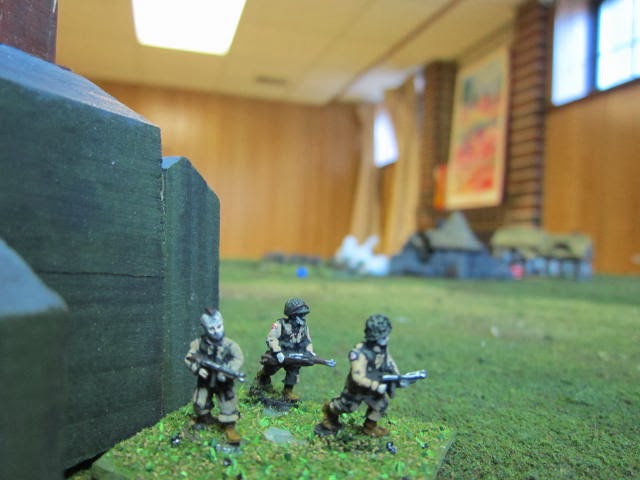 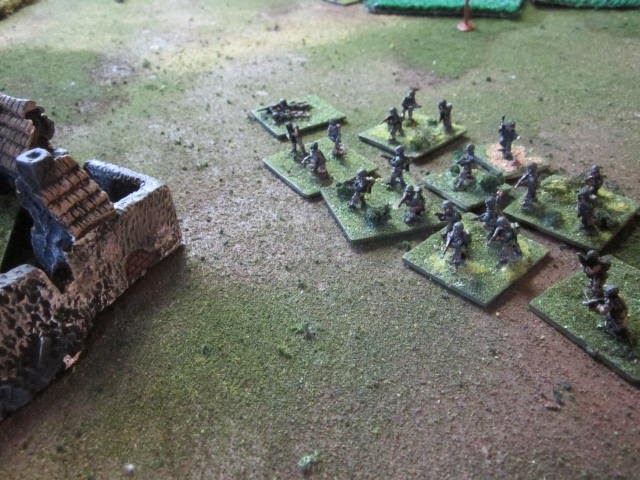 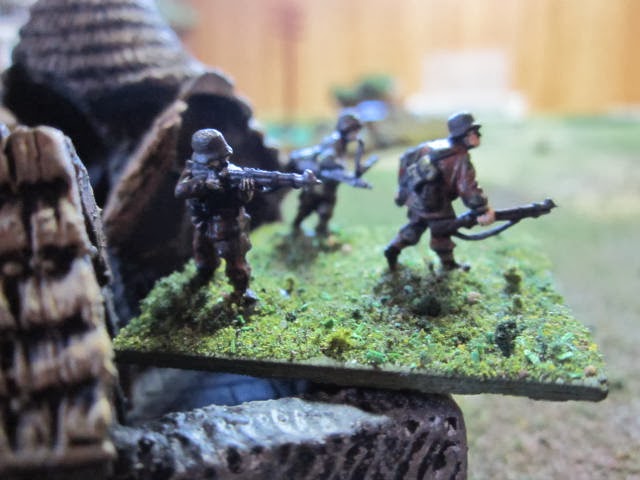 By now, Gerry's only hope for a counter attack is the company in the field behind the hedgerows with the AT gun.  They immediately come under fire by the US mortars and artillery.  They have a scratch force of 3 platoons and a 50mm AT gun to use in a counter-attack on the village.  And remember the Panther platoon is still out there. LESSONS LEARNED (sort of)
This game was incredibly enjoyable and I still believe my values are solid.  If you have a game with "assault troops" and elite morale, you had better have a counter to use against them.  The Panther platoon was my ace in the hole and still lived to the end of the game.  Like in real life, the Artillery was the US player's lifeline and kept his advancing infantry alive through the advance.  Does that even need to be written???

The German player probably could have used a covered and concealed route to counter attack the village as that would have saved those 2 en-trucked panzergrenadiers from destruction and the para ambush.

What i really love about this game is the speed in which it's played.  This game was resolved in under an hour even with artillery and tons of infantry moving only 12cm's per turn.  In fact this was a slower game than usual but luckily I diced and ended up with playing the width of the table versus the length.

I think next I need to come up with unit breakpoints so I'm not doing math during the actual game.  A quick mathematical formula for determining BP and casualty rolls would be helpful as well.

Giving each infantry platoon a "support weapon" roll made for a quicker game also.  This represents light machine guns and possibly 60mm mortars carried at teh company level in many armies.  It gives infantry the ability to "reach out and touch" instead of solely relying on them for firefight and close assault.

I am moving closer to actually writing these rules.  This is my 7th or 8th game of Combat Team! and so far the results have been fairly realistic without too much ambiguity.  Still wondering about the concept of suppression and right now the breakpoint rule and subsequent modifier to the initiative roll is all i've got - but the game still flows nicely.  When I finally get my desert board finished, I can play some North Africa battles with some lighting fast tank engagements!


Posted by Disgruntled Fusilier at 9:57 AM