Popular Board Wargames as Miniature Games

This morning I was thinking about "Team Yankee." Not just the book but the ever-popular board hex wargame from GDW and its tremendous potential as a miniature wargame rules set.  These days, people are turned off by "combat results tables" but simple CRTs might lend themselves to quick and tidy gaming all the same. 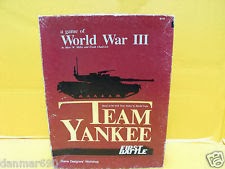 Then I started thinking about "Squad Leader in Miniature" and some of the trouble I had when I just sat down with some minis and the "supplement" and thought I would start playing straight-away.  Not the case.  The same would hold true for Panzer-Blitz or Panzer Leader, or Arab Israeli Wars. 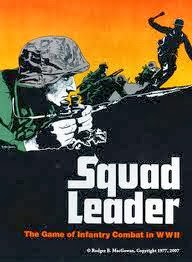 Here are my thoughts on using these great and classic wargames as miniature rules sets: 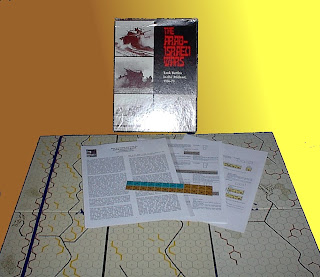 PROS:
For the most part, they are painstakingly researched and written by wargaming giants like Jim Dunnigan, Frank Chadwick, and John Hill, so you know they've collectively done their homework on these sets.  In most cases they explain their methodology for morale, weapons penetration and effects, terrain, line of sight (so important in board-to-table wargaming) and the like.

Ground scale is already done for you.  Just find out what a "hex" equals and find a way to equate it to inches (or cm's).  For games where a stand represents a platoon, this is usually easily accomplished.

Wargaming these games on the tabletop eliminates some of the frustrating questions I had when gaming on a board with the rules.  The opportunity fire rules and Line of Sight in Arab Israeli Wars is a case in point.  When you can visualize in 3D, you can answer some of the rules questions easier so it eliminates the use of the LOS table and some ambiguity.

CONS:
You've got some work to do.  I tried playing Squad Leader in Miniature (SLIM) a few weeks ago and it was a disaster because I had not done adequate preparation prior to play.  Remember your stands don't have data on them unless you've committed yourself to a certain rules set.  In this case, I had no idea what different squad values were in Squad Leader so I was digging through my pile of cardboard pieces looking for an engineer squad (8-3-8 by the way, in case you were wondering.  Firepower 8, Range 3, Morale 8).  I also lost my quick reference sheet so I had to improvise and use one taken online.  Since our printer is kaput, I had to use my teeny, tiny little tablet so scroll around on.  Which was okay, but paper copy would have been more desirable.

Unit values and special equipment.  Squad leader units carry panzerfausts, company mortars, Light Machine Guns, and satchel charges.  It's not easy to articulate which squad is carrying what unless you've got miniatures to properly display this.  My solution - which requires an small amount of work on your part, is to create a unit statistics sheets like in the Flames of War Armory or GHQ data lines from the equipment pages of their rules book.  You can get as creative as you want in making them so in the end you have a visual aid that will help in game play by speeding it up.  Eventually you have the values memorized but for returning to these game sets, a QRS and Data Sheet are vital.

Using the Old Game Chips.  Squad leader wants you to use the Fire For Effect counter and the Spotting Round counter, and all that sort of stuff that mark some administrative things going on on the battlefield.  This is okay as the chits usually fit onto the stands nicely but what if you're using 6mm troops?  You may have to create your own special-stands that represent these things like equipment breakdown, spotting rounds, etc.  Not an impossible (or even unpleasant) task, but lazy gamers like me will just use the chits from the game.

Anyways those are my thoughts.  I really am jonesing to play Squad Leader as it was one of my all-time favorite games.  My 15mm troops would really be perfect to play it so I'll have to do some work on creating a QRS and a unit data sheet.  Naturally I'll make this all available upon request!

Posted by Disgruntled Fusilier at 11:26 AM