One of the things I love about wargaming is playing large-scale battles with whole brigades if possible (if you have the models, space, and time).  So far Combat Team! has not disappointed, handling larger battles mostly with ease.

Today I finished a large, eastern front "breakthrough" scenario and I have some more pictures and observations to consider.  This battle had a large Soviet tank brigade with a supporting infantry battalion or two trying to break through a reinforced German infantry battalion with an attached panzer company (Mk IVh) and a heavy tank company of tigers.  The infantry also had their Pak40 AT guns to help out.  Terrain was dominated a few hills and a town in the middle of the board.  A cursory glance would have you mistaken for thinking the Soviets would steamroll right through the Germans but it wasn't so! 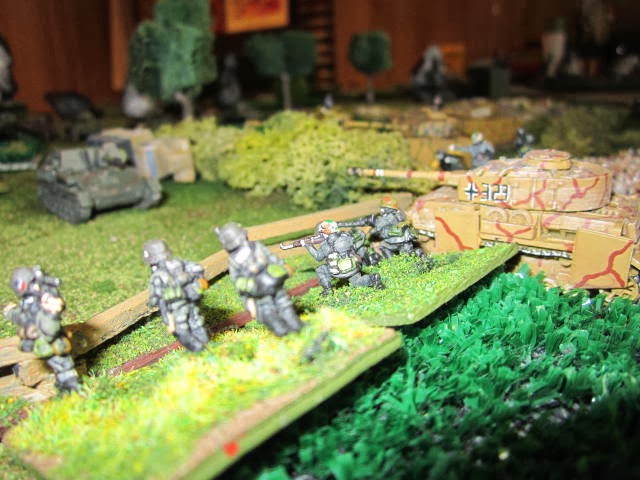 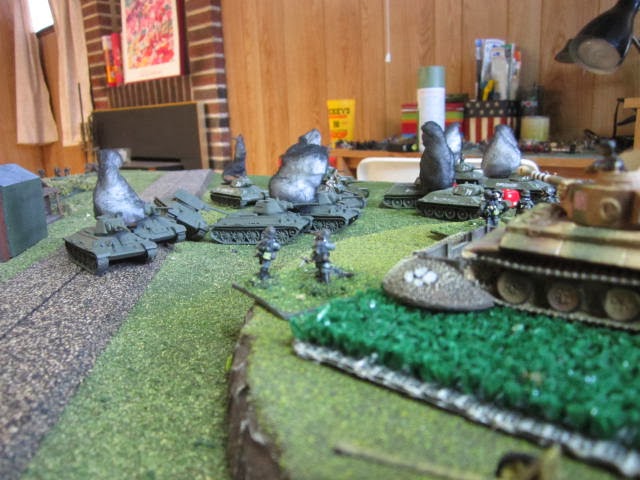 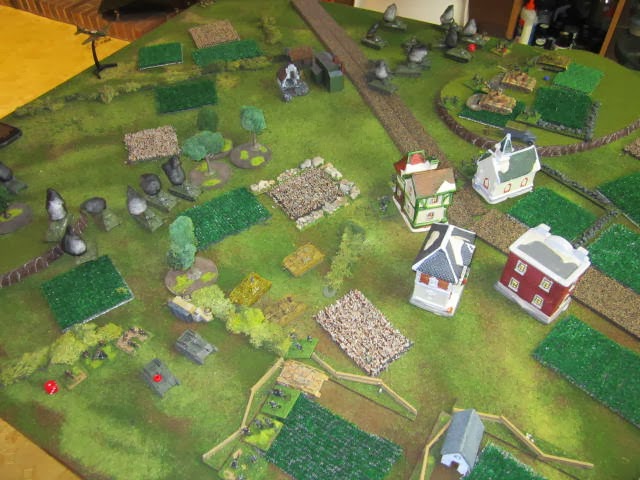 The Soviet attack was slow to start off (as they always are with a 4+ activation roll...) and the German Tigers on overwatch were deadly against them as they came on, forcing suppression rolls and 30% casualties on the Russian tanks before they even got into range.  Still though, for all the anxiety facing down 12 T-34s to my 3 Tigers, I moved up the last reserve infantry company behind them incase they were overrun.  I'd have infantry support in the close combat.

On the northern flank, Russian infantry broke through the German company defense but at heavy price and the breakthrough unit would remain "broken" for the majority of the game until a last minute rally allowed them to resume the advance - just in time for the Panzher IVh company to counterattack.  This was also my first use of the SU-76 assault guns and they were alot of fun to use as well.  They are devastating against infantry at close range and you can use them in a pinch to roll through a hole in the line if you need them to.  (and if you can get them activated....). 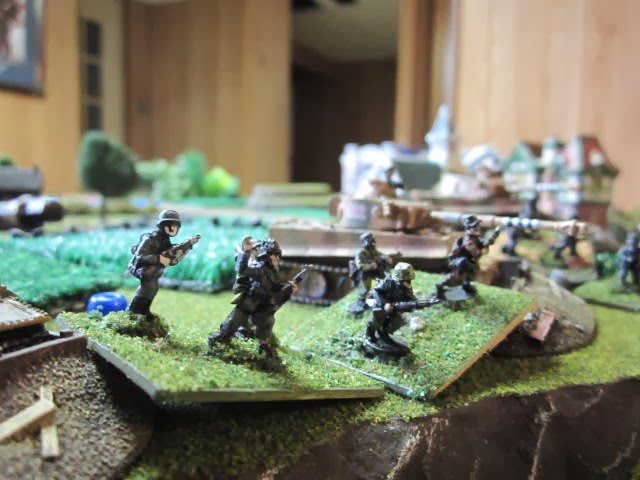 I did learn some things to pass on in this scenario as well.  Reconnaissance units can be used to perform counter-recon activity as well.  My T-70s destroyed the German recon/FO unit in the village early-on.  Use their "free" activation to move about the battlefield, hunting the enemy's recon or supporting your main effort.
If you're playing Soviets in Combat Team! you should keep your recon units with your main effort tank battalions.  Their cumulative +1 To Hit mods for successful spotting rolls really reflect the importance of reconnaissance units' role on the modern battlefield.  They pinpoint enemy positions and are force enablers to your maneuver units.  Going up against dug-in Tigers, you need all the help you can get!

Another lesson learned was the importance, in Combat Team! and modern war, of having a maneuver unit to exploit breakthroughs.  Had the Soviets used the T-34 battalion on the Northern flank better, they'd have a large and powerful unit ready to move through the shattered German infantry company, before the Germans could fill the hole in the line.  That would have been "game over" for the German player.  Unfortunately the T-34s were stuck in a tank duel with the Panzer IVh Company...a losing proposition for tanks designed to move swiftly across the battlefield and break through enemy positions (in Combat Team! T-34s move 25cms)

This game was an overwhelming German victory - with Gerry only losing 1 infantry company team and no armored vehicles.  The Soviets losing 3 T-34 battalions and the equivalent of 2 infantry companies.

Oh and the IL-2 sortie never showed!  This was bad luck for Ivan from the start.

Next game will be a German counter-attack.


Posted by Disgruntled Fusilier at 10:28 AM