I received my copy of Battlegroup: Kursk in the mail roughly a week ago and have been perusing the rules since.  Today I had my first go at playing a small game of BGK.  The scenario was the "introductory" scenario entitled "A Clash of Reconnaissance" and features some recce troops, an infantry platoon per side, and an armored fighting vehicle in reserve.

The Soviets had 2 x T-70 light tanks, an infantry platoon, an MMG section, an 82mm mortar section and their command.  The Germans had an infantry platoon with 1x 222 wheeled recce vehicle, a Panzer IVG in reserve, and a PAK 38 AT gun towed by a Steyr heavy car.

Both sides had an objective to take but Soviet reconnaissance vehicles sped ahead and not only captured the German objective but KO'd the small wheeled recon vehicle.  The crews exchanged fire and the 20mm auto-cannon could not penetrate the T-70s hide on the first go-around.  The Soviets captured the initiative and would have it almost the entire game.

The Soviets diced and received all of their platoon at once, as did the Germans on their turn.  The Germans had to advance through a huge open field to get to any suitable cover.  They immediately came under fire by the T-70s.  Luckily for them, Ivan was a lousy shot today! 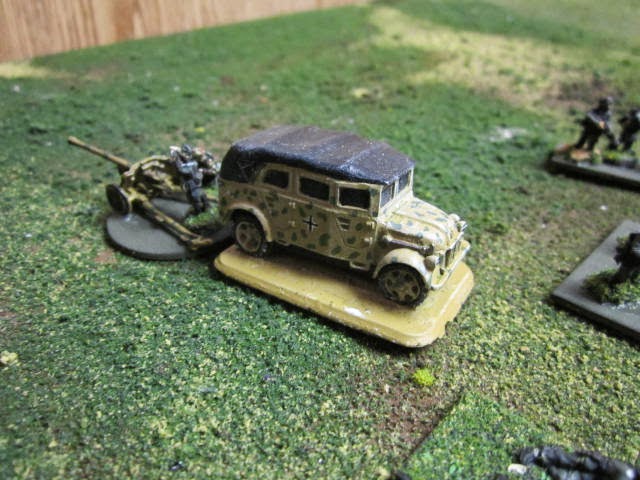 The Germans deployed the PAK 38 to cover the infantry's advance after the Soviets brought up both T-70s.  Meanwhile, the Soviet infantry is slow to get going off the start line but eventually their squads reach their own objective and the Germans begin to accumulate battle counters, which are random points that, when added up to equal your force's battle rating, force you to withdraw from the field and lose the game!  By now, the Germans have accumulated counters for losing the 222 recce section, having fewer recon units than the Soviets, and the Soviets taking 2 objectives.


﻿﻿ ﻿﻿  The action heats up as both sides get their armored reinforcement.  Both Ivan and Gerry push their infantry forward.  A lucky HE hit from one of Ivan's T-70s KO's the Pak-38 crew killing all of them, and good shooting on behalf of the Panzertruppen as the Panzer IVG kills the T-34. 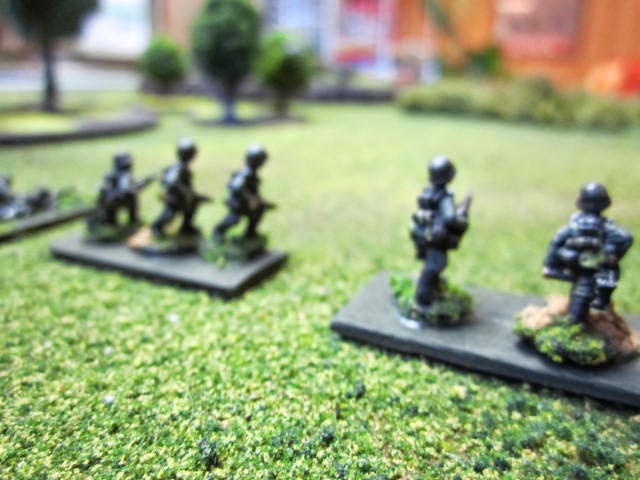 The Germans are able to push one squad up into the woods just as the Soviets occupy the hilltop to their front.  A brutal "back and forth" breaks out with the Germans getting the worst of it.  The Russians were mighty mad after losing that Maxim team.  Heavy small arms and MG fire rains down into the woods and pretty much destroys the German squad.  Unbeknownst to me, a squad that is pinned and reduced to 1 man is eliminated.  I kept Hans on the table for a little longer than I should have.  But it was a great chance to learn the close assault rules.  The Soviets flushed the forest out with 1 squad from the hilltop taking heavy casualties.  After I realized my mistake, I took Hans off the table, and "regenerated" the Soviet casualties...


The Germans receive another 5 counters for un-pinning a pinned squad and that brings them one away from their breakpoint, with the Soviets 3 away from reaching theirs.  THis is going to be close but you can see which way the wind is blowing!  The loss of the German squad adds yet another counter to the pile.  A 1 is drawn effectively ending the game.

INITIAL THOUGHTS
Overall, I enjoyed Battlegroup Kursk.  I have to echo what everyone else has said in the avalanche of reviews that are already out there on these rules.  "These aren't my go-to rules...yet."  The engagement system, penetration rules, rules for pinning and suppression are solid and unlike other games, victory is in no way a foregone conclusion.  A clever commander can snatch victory from defeat.  Look at this game for instance.  The Soviets came out on the bottom of almost all the actions they fought in, but still won the game.  (wow if that doesn't sound familiar).

A 6 x 4 table is probably just the right size for a "squad" or "platoon" level game.  With all of the forces on the table, this game was still rated as "squad sized" which is interesting.  With a little book-keeping, solo play is not out of the question but this game is probably way more fun with other human beings to play against.

I also like the fact that you don't have to have huge armies to play a game.  1 platoon with accompanying support functions is more than enough to have an enjoyable 2 hour game no-problem.

Watch out with your infantry as well.  Aimed small arms fire is absolutely devastating if they're not in cover.  And don't drive your armor too close to enemy infantry in cover either.  These rules are refreshing in that "real world" tactics, techniques, and procedures work for your troops on the table.  There aren't too many games that can make that claim.  So look for more, bigger games of Battlegroup on this blog. 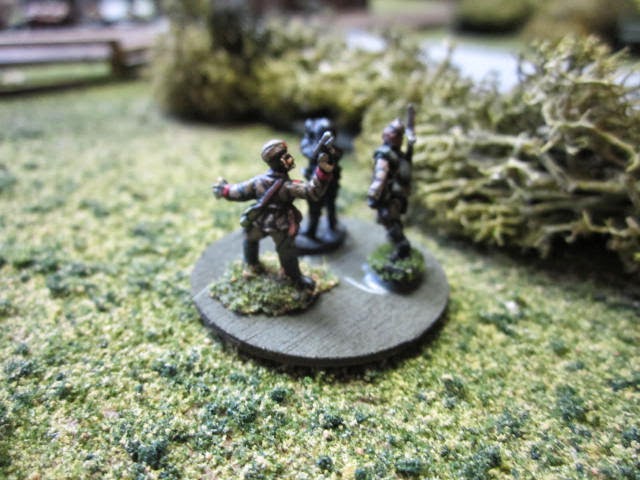 Posted by Disgruntled Fusilier at 12:09 PM