I mixed things up a little today and broke out some of my treasured 15mm modern vehicles and took Mike's terrific home-brewed Flames of War modern supplement for a spin.  His blog is "STOPPING THE RED TIDE" and definitely worth a visit!  His FOW supplements are free and on the right-hand side of the blog.  He also does the gamer another service by posting links to other Flames of War modern supplements, all home-brewed.

Played the HOLD THE LINE scenario from the latest edition rule book and gave the Soviets no Artillery support to try and simulate the stress of a hasty attack under timed and austere conditions.

This battle featured a Soviet force of 3 tank platoons (2 x T-80 and 1 x T-72B) and a BMP-2 platoon squaring off against a West German force of a single Leopard IA4 platoon, and a Marder II Platoon with infantry.  German delayed reserves consisted of a Panzer Jaeger platoon of Jaguars and Jagdpanzer Kanones, and a M48A5 platoon in reserve.

PS sorry for some of the crappy pictures - I am still getting used to my wife's camera after the other one bit the dust. 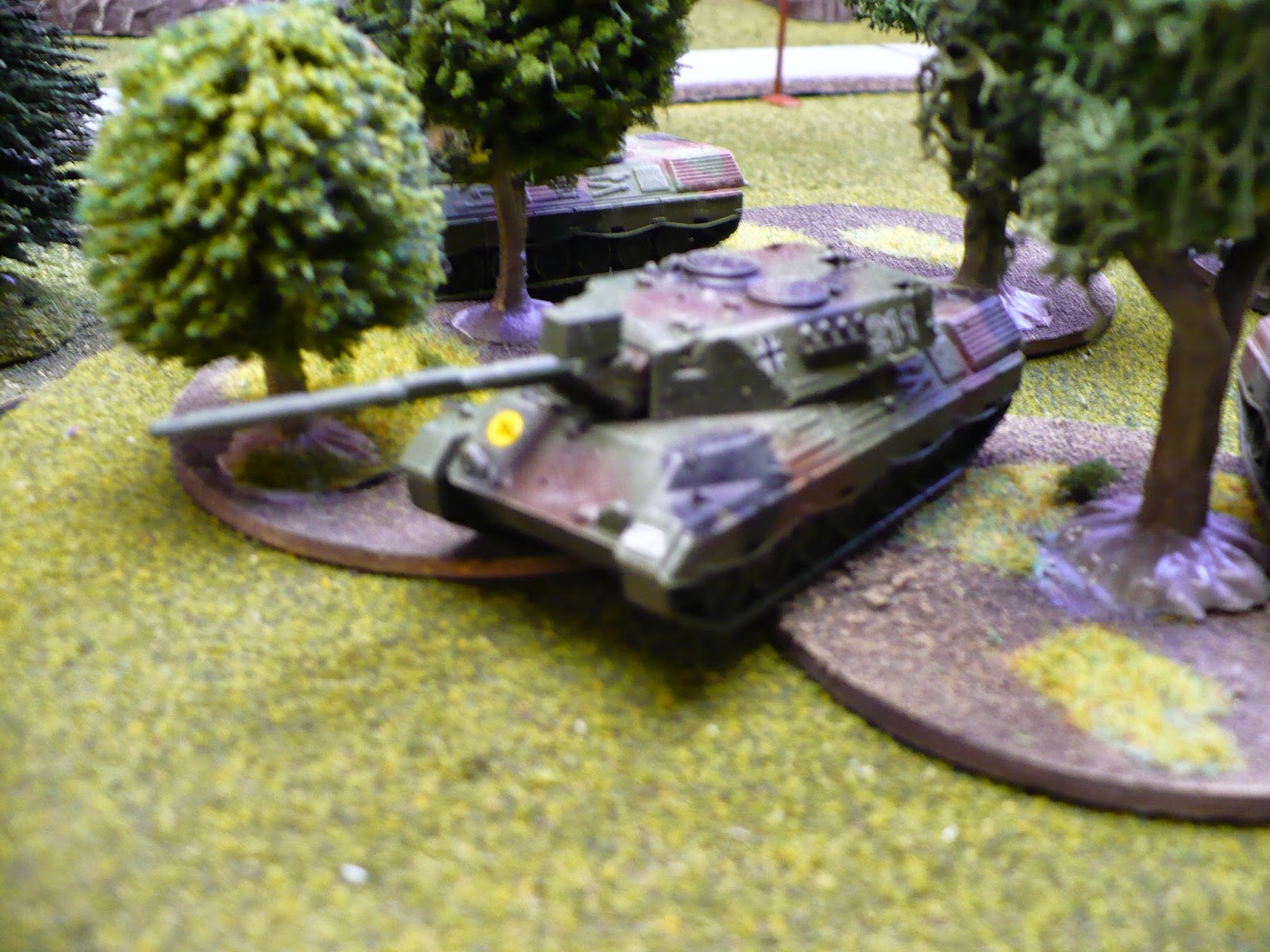 I am finding that even though it's been awhile since I've played FOW, it's like muscle memory and it comes back to you.  Can't say that about alot of rules sets.


As each turn progresses, I'm starting to see the relative invulnerability of those Soviet T-80s, and my Leo's are starting to feel inadequate!! 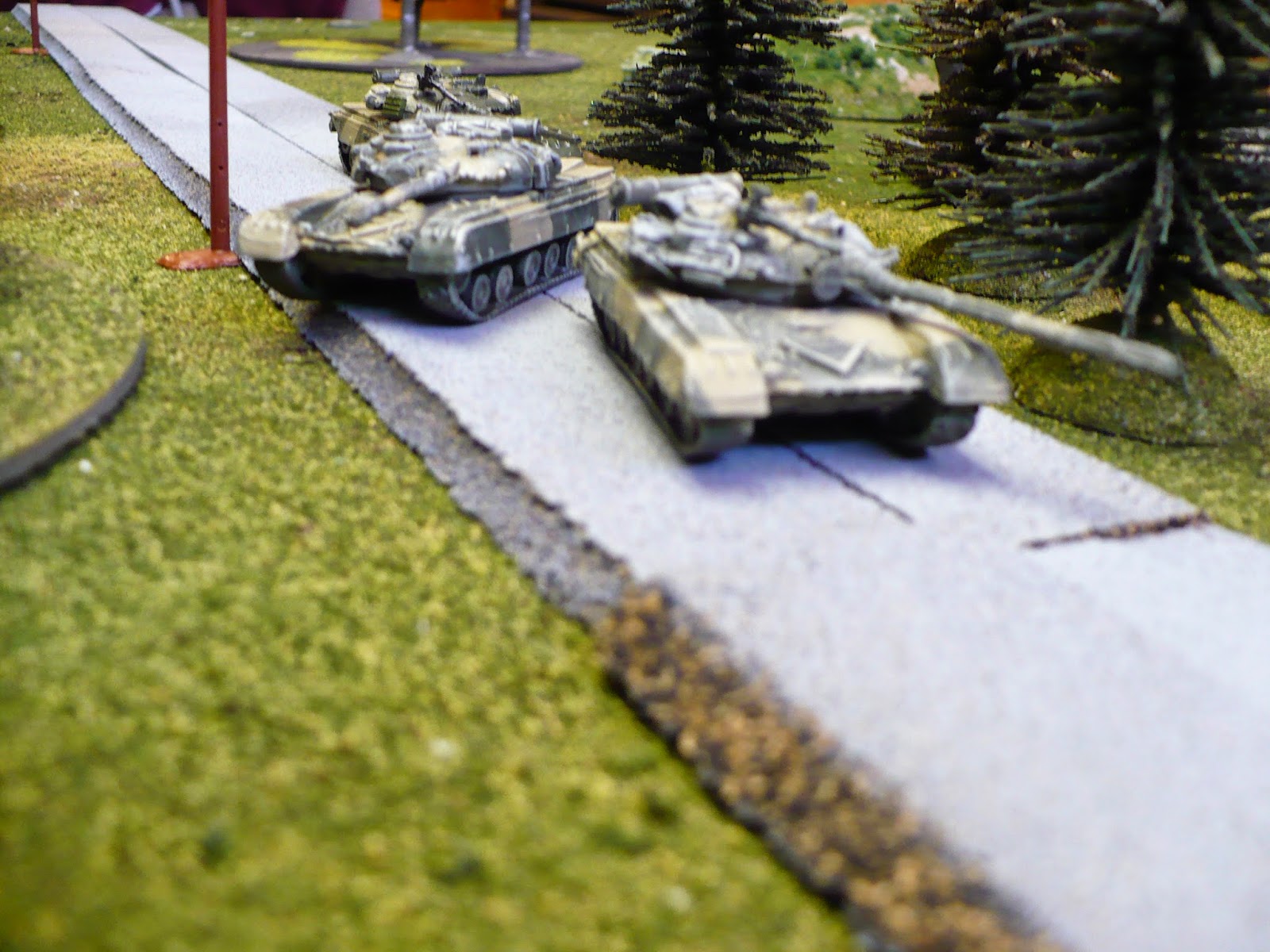 Meanwhile my Marders aren't having the best of luck trying to knock out the platoon of T-80s to their front.  Their Milans hit true but the reactive armor save and relatively low AT value sees not a single T-80 burning at the end of the turn!!  This isn't the "Soviets get creamed by excellent NATO gunnery" usual styled game.  Those of you looking for a "storybook ending" for this battle had best stop reading here!! 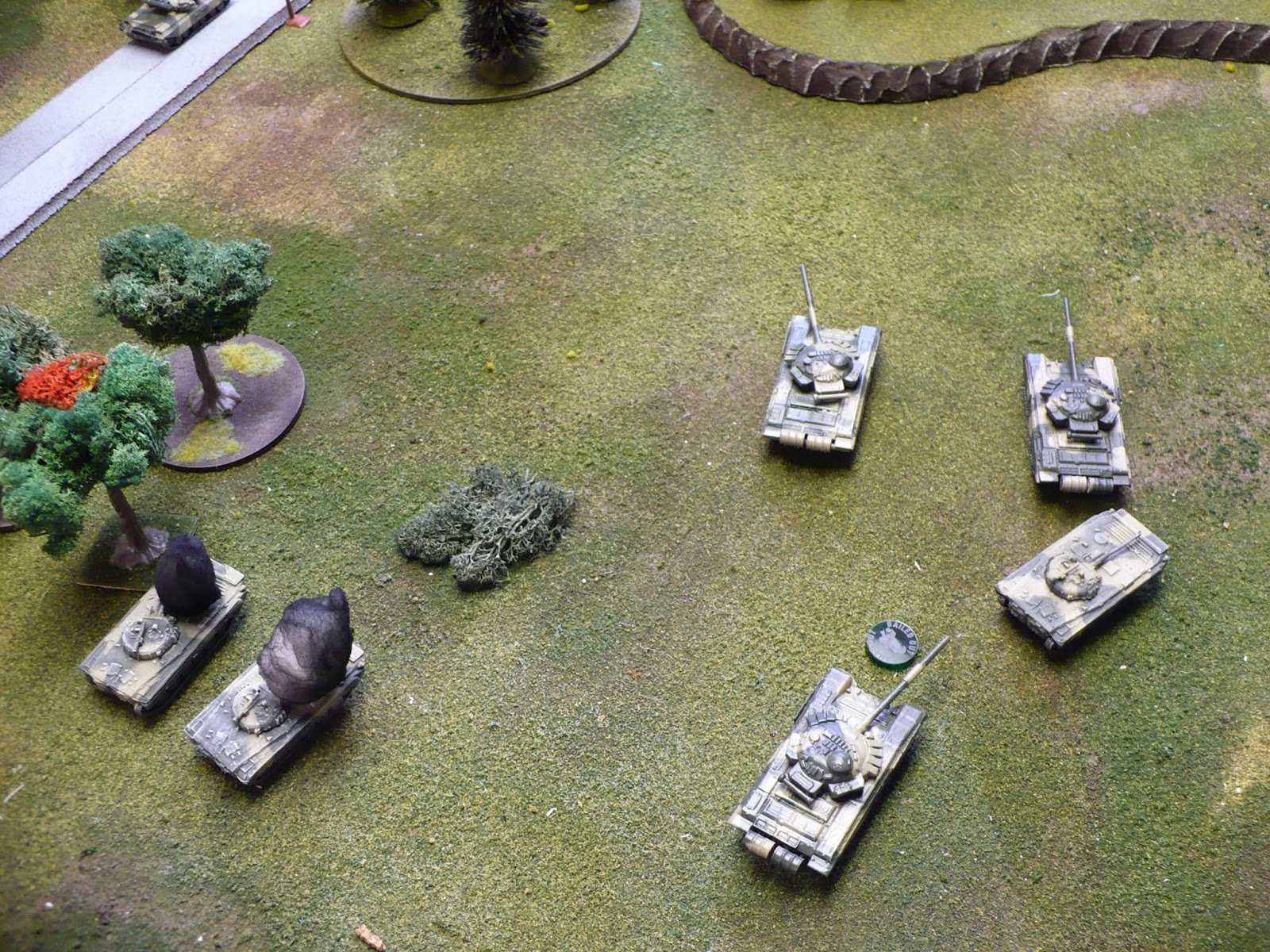 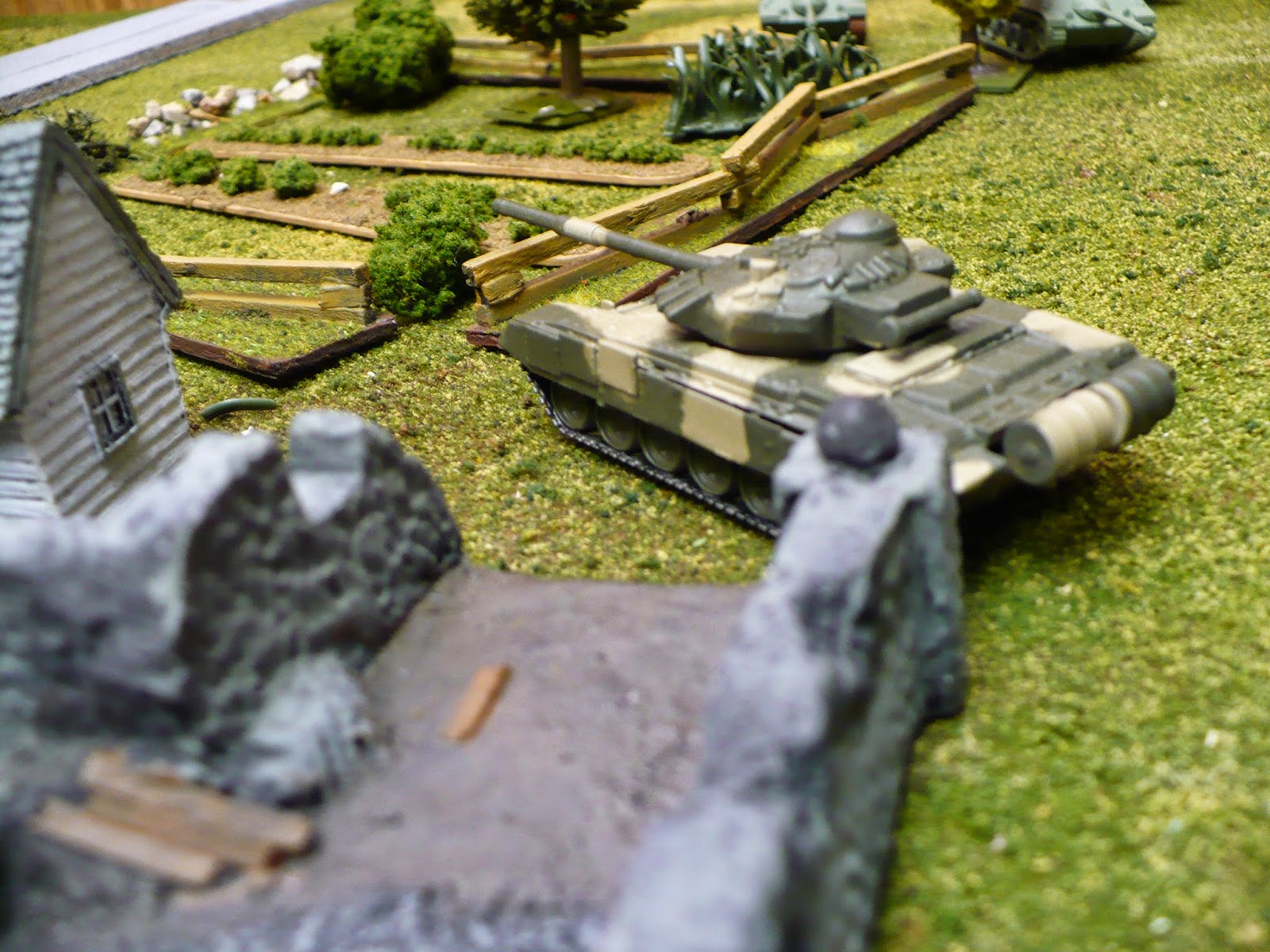 The Soviet advance is rapid and brutal and NATO is knocked off their feet both by the invulnerability of the T-80s and the speed of their advance, with the Marders and Leos finding Soviet armor in their midst before they even know what is happening.  The Luchs is cut off as well. 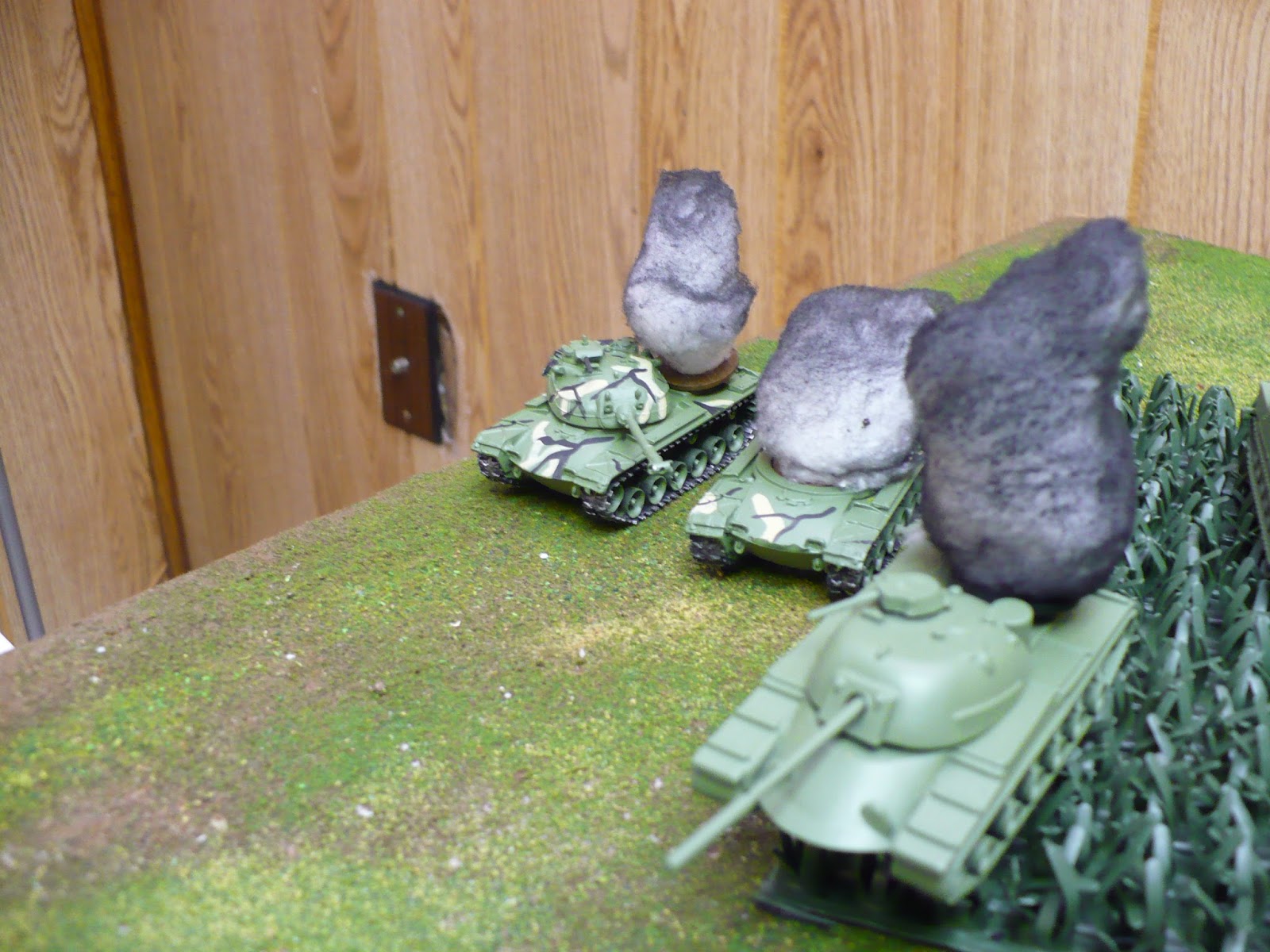 The left-most Soviet T-80 platoon stays put this turn on overwatch for their comrades.  The result? 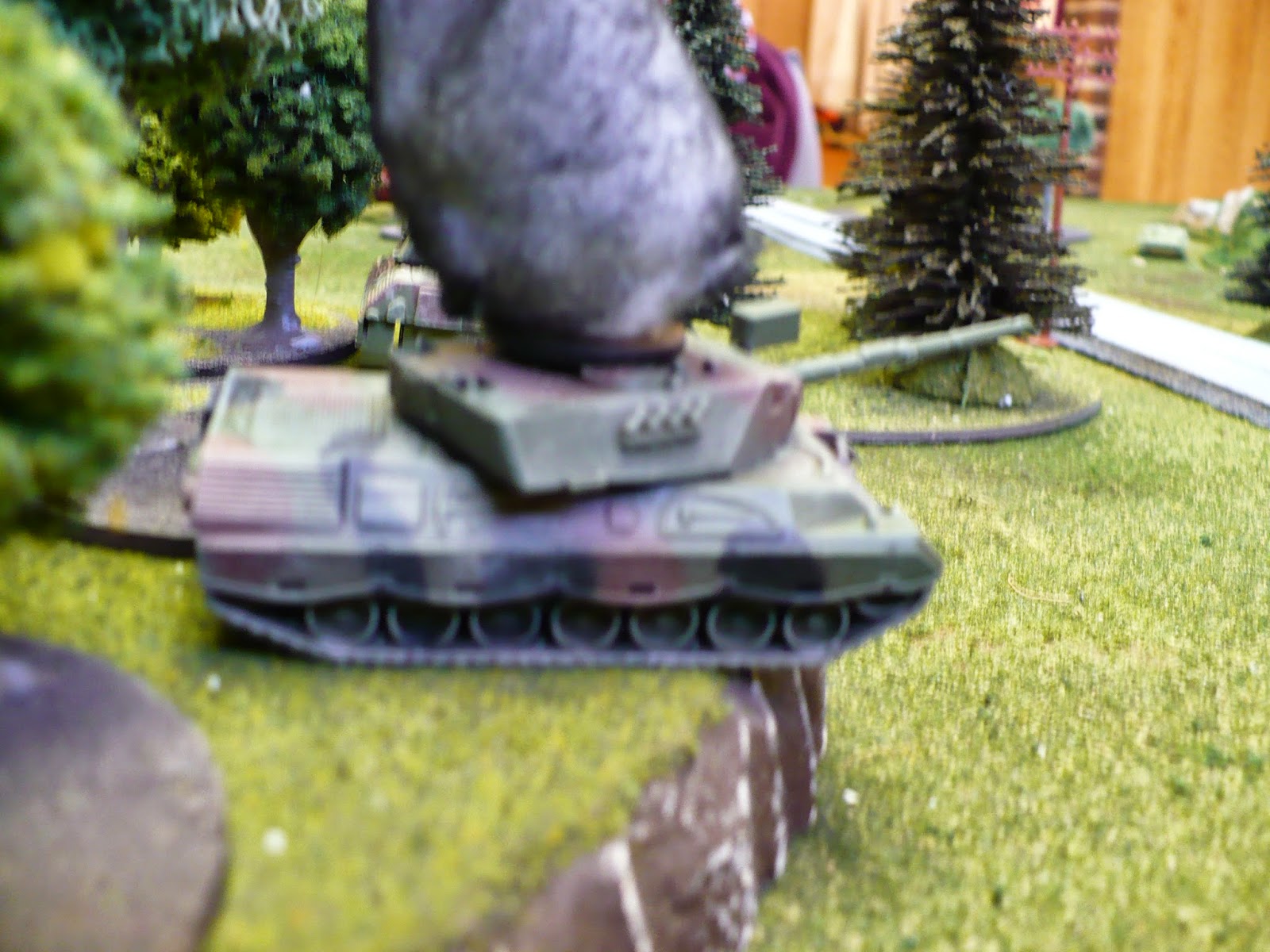 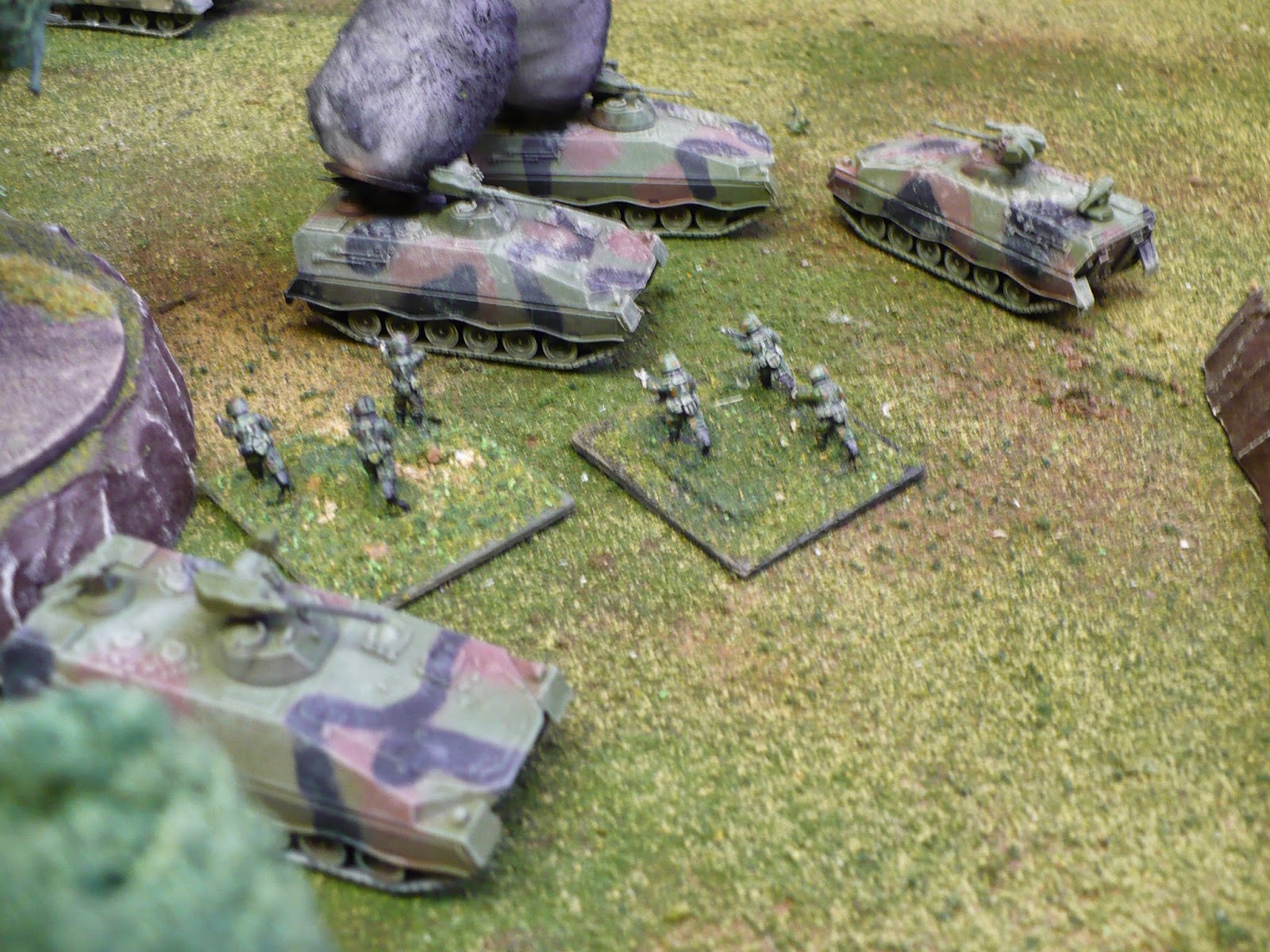 By turn 6 there are 2 Soviet tank platoons sitting on the objective and no one has the firepower to knocked them off.  The artillery was ineffective against the more advanced Soviet armor, and the tanks needed flank shots to get a kill.  Simply hoping on the Soviets to roll low on their saves wasn't nearly enough!

Post-Game Wrapup:
Mike has built a solid supplement for a proven game.  The beautiful thing about FOW is that it is easily learned across the board and everyone in the gaming community has at least heard of it, let alone played it once or twice.
Mike's modern supplement gives the Warsaw Pact a decent chance of victory but you have to play your cards right.  The T-80s and T-72 are classed as "light tanks" giving them a 16" movement each turn.  Use your tools to the max and push your forces hard.  Knocking NATO off balance prevented them from massing their fires and setting up the kill areas they desperately needed.  Also the selection of Reserves proved important.  The Panzer Jaegers should have set up early on.  Their TOW missiles would be much more effective than the Milans - but I didn't know that prior to starting!

If you are NATO and not using the vaunted M1A1s or Leopard IIs, ambush and flank shots are the way to go.  Small Warsaw Pact platoons mean you'll get Ivan to roll platoon morale faster than you will have to.  Mike also gives the Warsaw Pact Command Structure a key vulnerability so if you can possibly target company leadership, do it!  It will stall the Reds for a turn and give you some much needed time to "dress the lines."

This was a fun game - not my "go to" game by any stretch of the imagination, but I'm still shopping for a modern rules set I like that I can use my 15mm units for.  Some games coming up are Sabresquadron, GHQ's Modern rules, Fields of Fire, and perhaps Coldwar Commander once again.

In other news, I am looking to play some rounds of Charles Grant's "The Wargame," Black Powder, and perhaps some more "Squad Leader" if I can get more troops painted up.

I would also like to get a basing scheme worked out for my 1/72 fantasy troopers, whom I've been wanting to use in a game for a long time!

Posted by Disgruntled Fusilier at 3:25 PM