I started toying around with some ideas for playing the awesome Battlegroup: Kursk rules with Cold War era forces set in Central Europe in the 1980s.  The home-brewed results I assembled were satisfying enough for me to launch a test-game of them using my West Germans and Soviets.  Quite a few industrious individuals have already been playing their own home-brewed and unofficial modern supplement for Battlegroup so I thought I would join in.  I have read that the design team behind Battlegroup is planning a modern supplement but that is way down the pipeline.  Who can wait that long?!?!

Coming up with all of the Armor and Penetration data proved to be too big a job so I went with tried, tested, and true data for my Battlegroup: REFORGER supplement - I used all of the attack and defense values from excellent Team Yankee board game, as well as a modified combat results table morphed into a 2D6 armor penetration table.  The result looks very similar to the Battlegroup family of rules penetration table and if you've ever played Team Yankee, you know it's a well-researched game with solid combat values.

I played the scenario "A Clash of Reconnaissance" as it fits in nicely with a "D+1 Soviet Advance" scenario.  The Soviet recce elements are attempting to locate and fix the NATO main line of resistance (MLR) and the NATO covering forces want to stop them.  I used similar forces to the scenario in the BGK book:

This game is a meeting engagement.  AAR follows with lots of pictures!

The game started out with the Soviet recce units working their way forward onto the objective and by turn 2 they were mixing it up with the Luchs.

Units were slow to come on with both Infantry platoons arriving piece-meal.  The biggest difference between Battlegroup Kursk and my modern supplement is the speed at which the units get into the fighting.  The IFVs have great mobility and when I played this as a WWII game, the recce action was over before the infantry got to shoot at each other.  This was much different with the battle unfolding almost from turn 3 on. 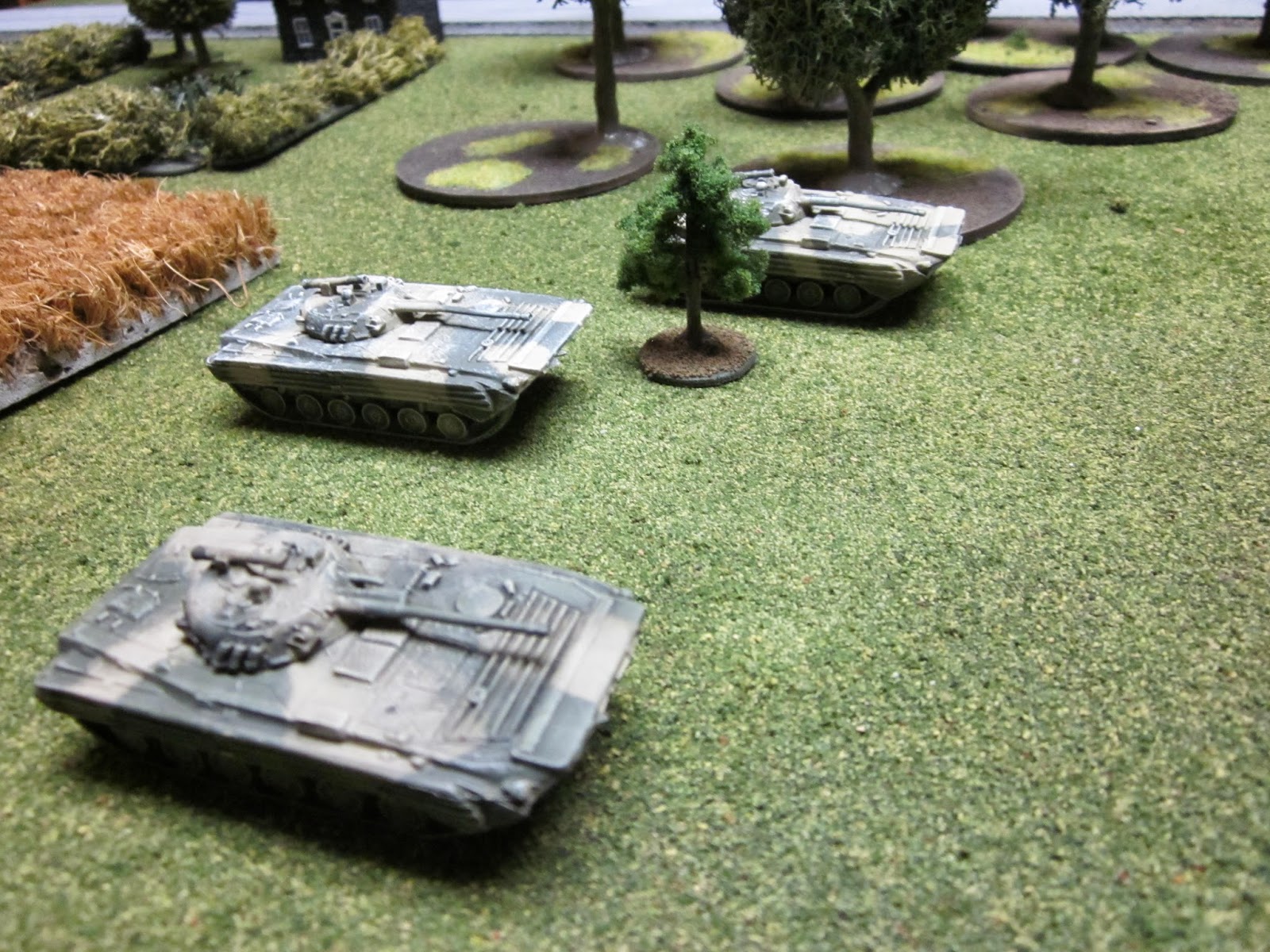 The recce action heats up as the BRDM goes for cover and the PT76 misses its one and only shot to kill the Luchs.  The auto-cannon chews through the PT 76s obsolete armor and it brews up right on the objective.
German infantry arrives all at the same time and uses their speed to get around the pine forest and reach the objective for a counterattack.  Ivan must be stopped!

One of the Soviet BMPs moves up and the infantry dismount around the objective to cover it with RPG, RPK and small arms fire.  Their comrades work their way up to the hill. 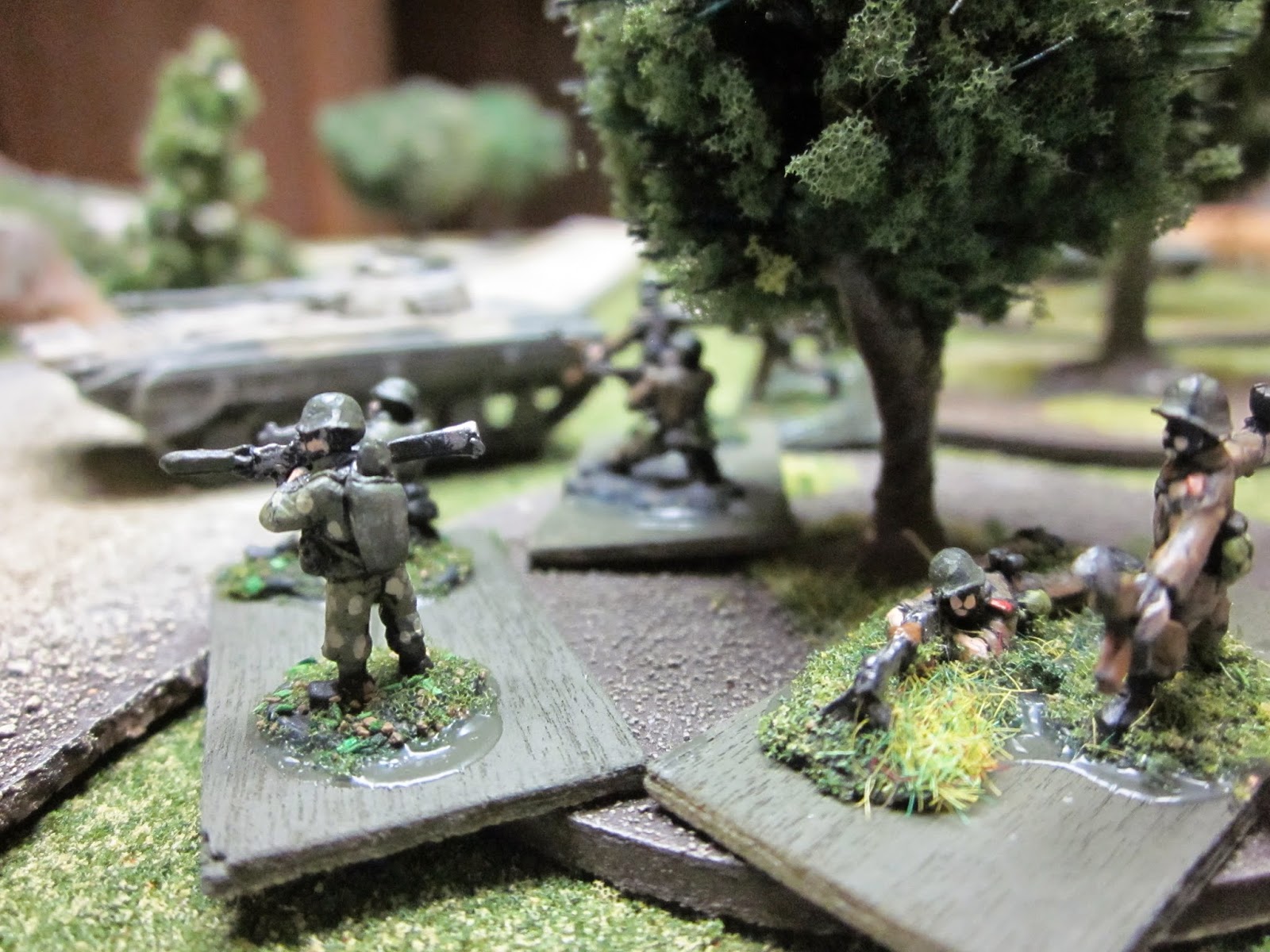 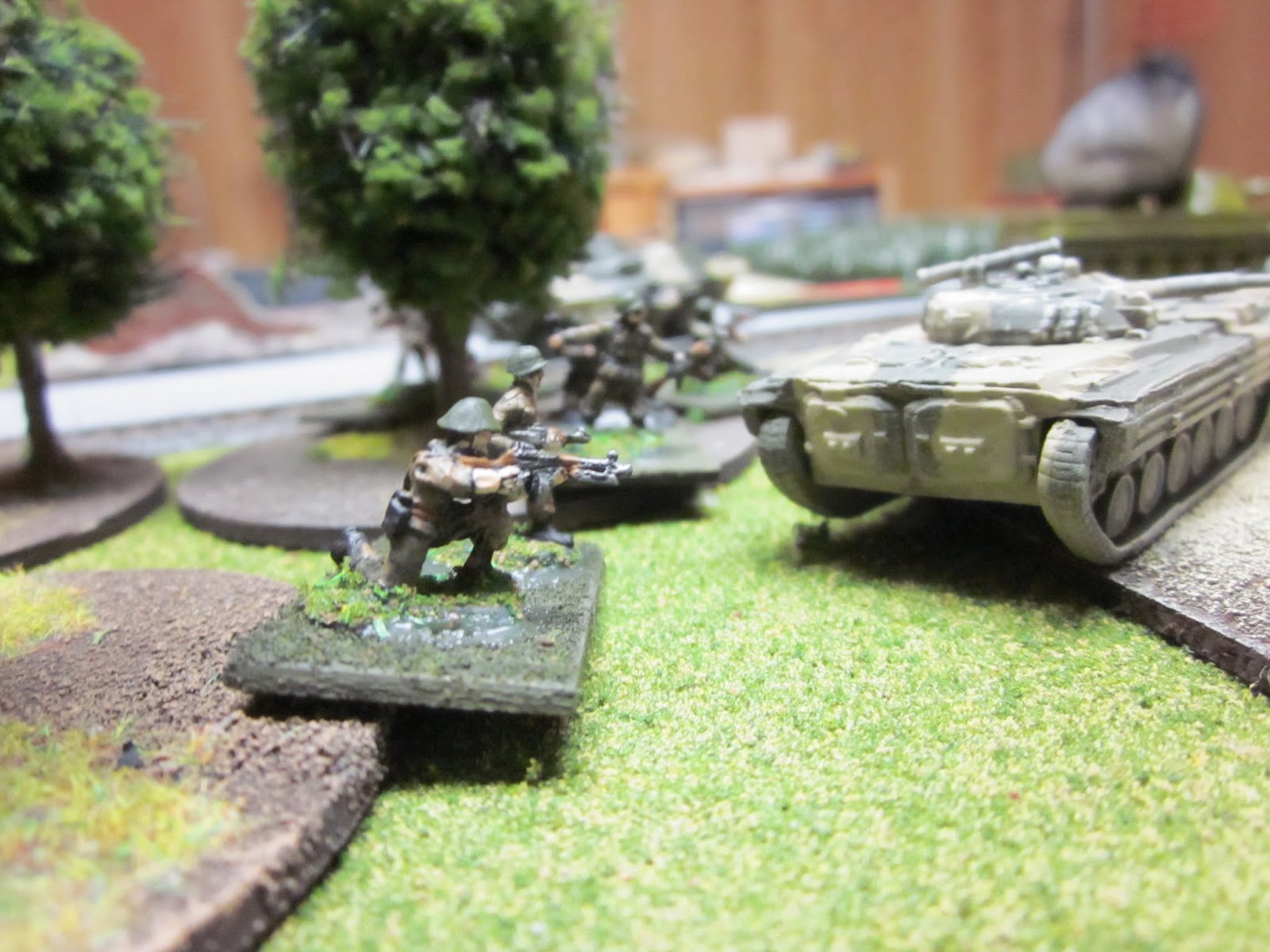 The Russian BMPs get into position along the dirt road, ready to flank the hill and engage Gerry.  The T-80 arrives on the battlefield and just in time.  Meanwhile the BRDM falls prey to good German gunnery as the Luchs adds another kill to its tally, and it's only day 1 of the war!

The beginning of turn 4 sees the arrival of the Armor and it's important for me to introduce a "new" rule to this supplement - Explosive Reactive Armor and saves as all of my infantry fighting vehicles are equipped with lethal Anti-Tank Guided Weapons (ATGM).  I gave the T-80 a 5+ save when hit by an ATGM to see if the ERA can deflect the shot. Also I used the restricted movement rules from Team Yankee so if you want to fire an ATGM, you must remain stationary.

It's also important to note a minimum ATGM firing distance so the 0-5 bracket is prohibited for ATGM fire.


I resumed the game this morning and the T-80 raced up to the objective to attempt to knock out the Luchs vehicle and some of the reported Marders.  Meanwhile the Soviet infantry advance on the hill and dismount their carriers, with 1 squad remaining to cover the objective.  One of the German Marders is in a perfect position for a shot and during the German turn, it fires on the T-80 with the ERA saving it!  Another Marder takes a shot and the T-80 fails its ERA save.  The penetration roll is successful and the T-80 is toast.

Speaking of ATGM fire, one of the Soviet BMPs spots a Leopard I moving up across the field!  Permission to engage is instantly forthcoming!! (are you crazy Serzheant?  Open fire immediately!)  The BMP2's AT-5 Spandrel missile makes short work of this small cat and both tanks are effectively knocked out of the game.  Man, keep your infantry with your tanks and suppress the enemy at all hazards!  These ATGMs are no joke... 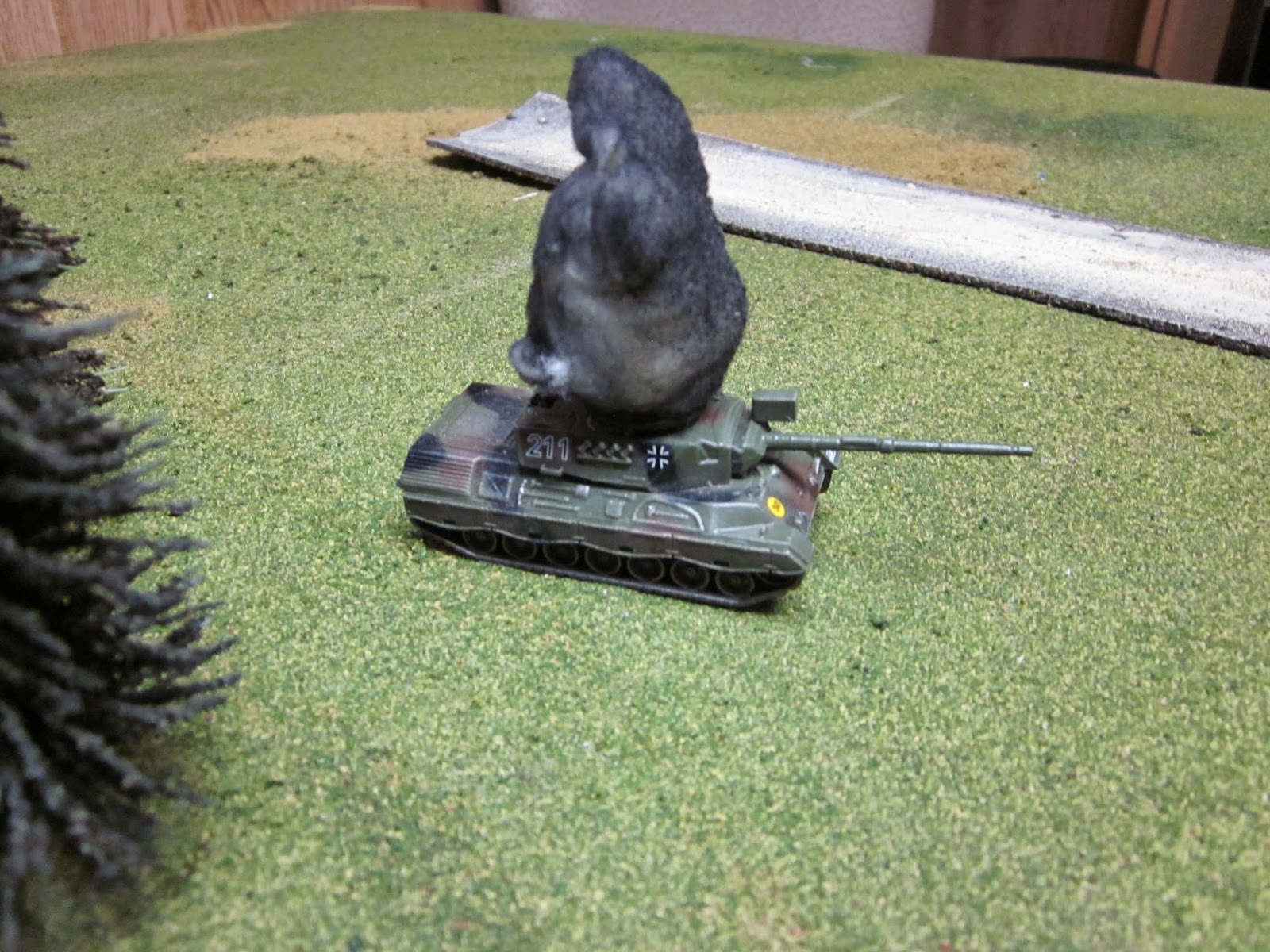 The infantry fight heats up now as the Soviet squad covering the crossroads fans out to engage German infantry.  Their fire causes a West German morale check and subsequent "Beyond the Call of Duty" move and the fight is on!  Soviets in a still-smoldering building (destroyed by well-planned Soviet artillery of course) trade vicious automatic weapons fire with the Germans on the other side.  The Soviet infantry on the right cautiously moves up the hill and secures the West German objective.  The resulting counter sees the Germans reach their breakpoint and the game is over with Gerry pulling out.

What did we learn today?

LESSONS LEARNED:
Well if you've reached this part then I applaud your patience.  This was a very exciting and fast-paced game that was extremely enjoyable and again, I can see what is so attractive about the Battlegroup rules.  Things move fast and the combat plays out like a real narrative from a modern fight.  I like the more realistic casualty rates as well.  The results of this battle are what I would expect from a real battle, with units pulling out still retaining much of their combat power, but their position becoming untenable and their morale failing, they pull out.

Making the switch to moderns was relatively easy with the Team Yankee values used for armor and penetration data.  The penetration table was a little bit of work converting it to 2D6 but the results are a convenient combat results table that delivers satisfying results for gaming.  with that said, there's still a little work to do:

I still need to work out better small-arms values for infantry weapons.  The modern era has a plethora of lethal shoulder-fired devices that can kill vehicles so suitable values need to be developed.

Spotting rules come from the original World War II rules and there should be a slight enhancement in a vehicle's ability to spot other enemy vehicles.  I added +1 to all of my vehicle spotting rolls and this might be good enough.

I should develop "vehicle stats" like in the BGK book that lays out penetration values at range as well as any special rules the vehicle brings with it.

Lastly I need to paint more infantry and vehicles!  I had to use some stand-in infantry as well as my VDV infantry for Soviet dismounts.  Next time, Id like to have more infantry painted up for both sides.

ATGM limited shots.  This is a very important feature - ATGM shots should be limited just like main gun shots in the WW2 game with resupply available as an option for larger games.

I am looking forward to incorporating mortars, more tanks, artillery and combat air support into the mix,  I have all those 1/144 Hind and Apache models, it would be a terrible shame to not use them!


Posted by Disgruntled Fusilier at 9:37 AM