This past weekend, I played a Napoleonic Volley & Bayonet game at Ken's house using his beautifully painted miniatures, scenery, and terrain and all those "flocking" bases made by yours truly.

If you've been reading this blog for awhile, you may know I am a big fan of Volley & Bayonet.  Unfortunately, comprehension of the rules is perishable and it has been far too long since I've played a proper game.  Even for a simple set of rules like V&B, Ken and I had numerous questions that plagued our turns and in actuality we only completed 2 full turns, but what a set of turns they were!

You can read up on Keith McNelly's excellent Scenario for Teugen-Hausen at this link here or go to the wikipedia article on the battle here.

One of the best parts (in my opinion) about Volley & Bayonet is that it puts you in the saddle of the Corps or Army Commander on the ground.  Decisions that would have to be made by the operational commander are made by you in this game.  Forget about the trivial duties of a Regimental or Brigade commander, you need to start thinking about traffic management of your units, maneuver space, and support for their attacks.  Reinforcements and reserves become crucial as your lead elements become worn down and non-mission capable. 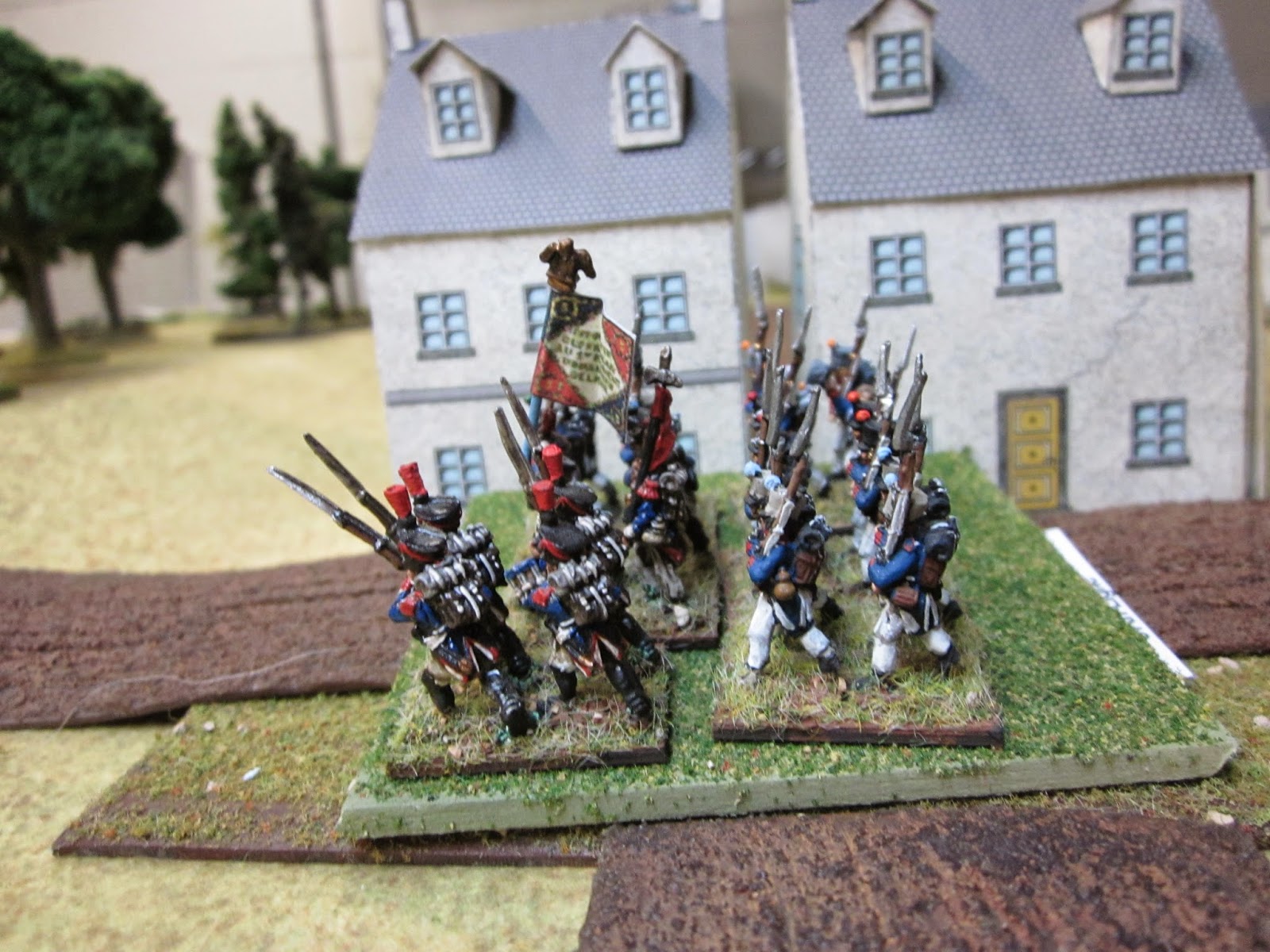 Ken as the Austrian commander had alot of combat power on the ridgeline overlooking Teugen, where my French troops were assembling and he made full use of it!  He expanded the line I would have to attack and also reinforced it with more Brigades.  The first combat sees a Brigade from Saint Hilaire's Division thrown back by combat with Grenzer detachments (I really underestimated those skirmisher detachments).

One problem I ran into was maneuver space for my Brigades arriving in March column as their "tail" goes back a long distance it's hard to position all of them at the same time.  You have to force them to stop at half distance and change into field formation.   So the first turn would not see too many of St Hilaire's units attacking.  I also toyed with the idea of detaching skirmishers of my own, but did not want to lose the extra combat power of my Brigades, so in the interest of time, I kept my Brigades together.

The first French attack is against the 2 small Grenzer detachments and is repulsed to the loss of 1 Grenzer unit.  I also forgot that the Austrian artillery could participate in this round!

Ken moves up reinforcements from Lusignan's Division and they bolster the Austrian presence on the ridge.  Additionally, he uses more skirmish units to lengthen the line and breaking through it will not be a walk in the park...

I immediately notice that the command distances are going to be a challenge to keep.

The scenario stipulates that the French receive a Division performing a "flank march" and I can start dicing for their arrival next turn at one of the arrival location along the Austrian left flank.  Ken and I had numerous questions about the rules, and that slowed progress just a little.  Retreating into other units was one question that we solved, also the type of forest terrain on the ridgeline being an "open" woods which we determined would be classified as "orchard" in Volley & Bayonet speak, (and Mr McNelly later confirmed).

Still though, the first 2 turns were incredibly enjoyable and I'm looking forward to the refight!

Posted by Disgruntled Fusilier at 10:20 AM