Greetings and Merry Christmas everyone!

Last night while my wife finished up some odds and ends for Christmas I pulled out the Soviet and German infantry and those "shiny" new BT-7s for a Battlegroup: Barbarossa game and was able to get through half of it with the result still in question.

Last year I played a Flames of War eastern front "Christmas Offensive" on Christmas Eve and I thought I would do the same this year, albeit with different rules.

I played the "Breakout" scenario from the Battlegroup Barbarossa book.  This features a Soviet force attempting a breakout from a German Kessel.  It's nice in early war Barbarossa games to see the Soviets as the attacker.

Also - the claims you have all made about the BT-7 turned out to be....absolutely true.

Just because things couldn't be "easy" I rolled double 1s for the German player's starting forces.  2 units would start on the board and no reinforcements due to arrive until turn 3 on a 6 x 4 table!!   I went with the PAK 36 and the HMG stand.  A wise decision as I would later find out. 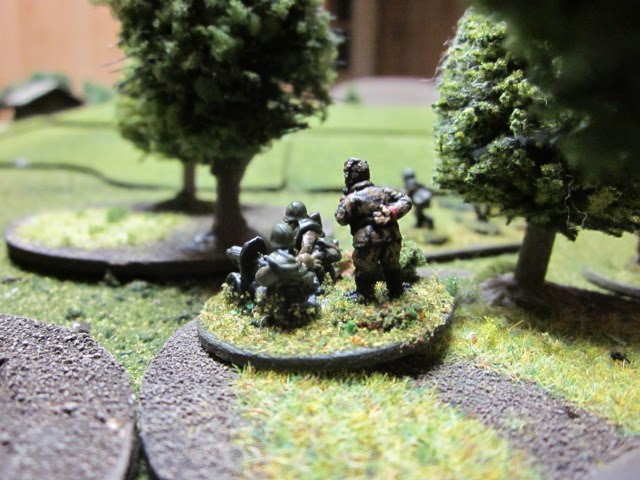 My German AT gun (the Germans set up first) starts in 10" of trench line along the road.  So naturally the Soviets set up opposite corner of the trench line and are determined not to use the road.  The HMG is also covering the road from the woods nearby.


Thanks to the terrain generator, this game would also have Ivan crossing lots of open ground to get off the board. 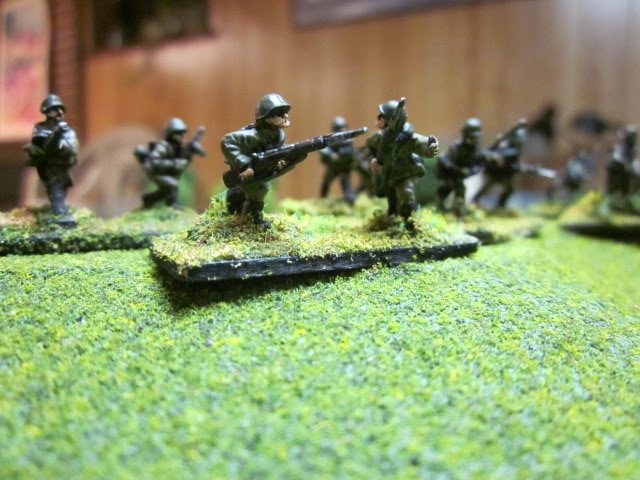 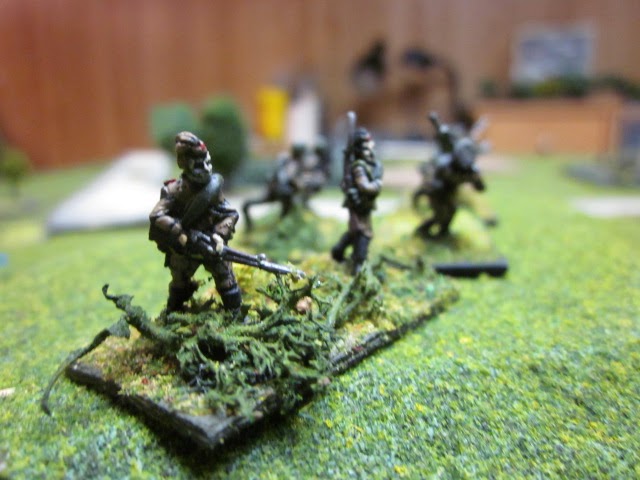 The Soviets roll low for the first few turns, thank God for the Germans as all of that infantry stays behind the hill.  The BT-7s stumble ahead towards the objective. 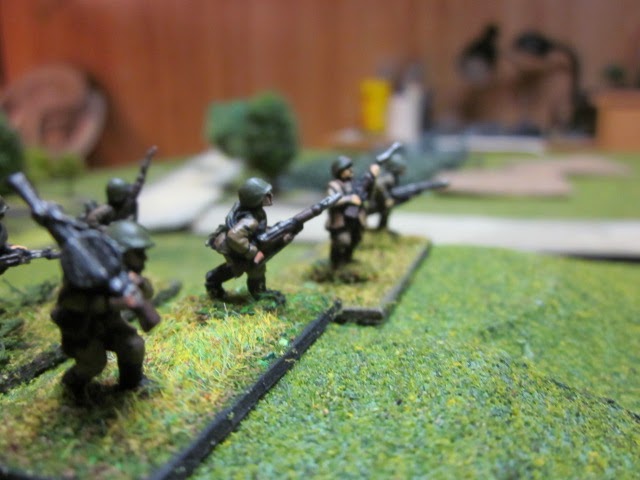 Now is when things start to get....interesting.  The BT-7 is unreliable so when the Germans draw a "1" from the BR counter pile, they can play it against the Soviets as a "Breakdown."  The next Soviet turn they race like hell to get to the objective.  That PAK 36 scores a long range hit on the first BT-7 in the clunker's flank.  This gets it a pinned result.  The second BT-7 claims the objective but when the German player pulls his BR counter out, guess what he draws?  A "1".  So he plays it against the remaining BT-7 which promptly breaks down on the objective...

This is going to be hard work for the infantry.  Capturing the objective isn't the boon i thought it would be.  The Soviet TC was seen kicking the tracks of his BT-7 when the Germans captured him. 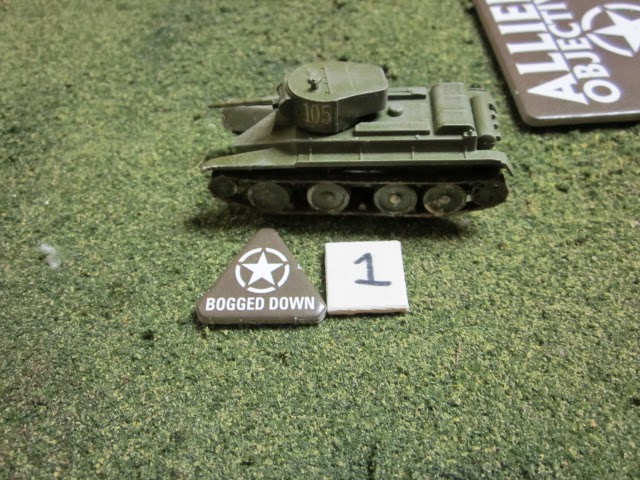 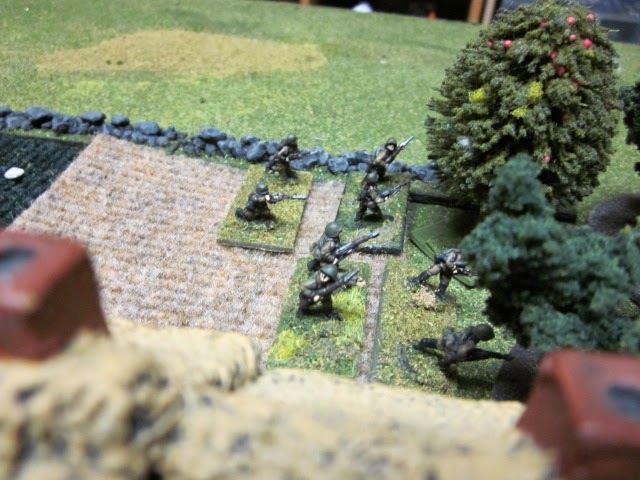 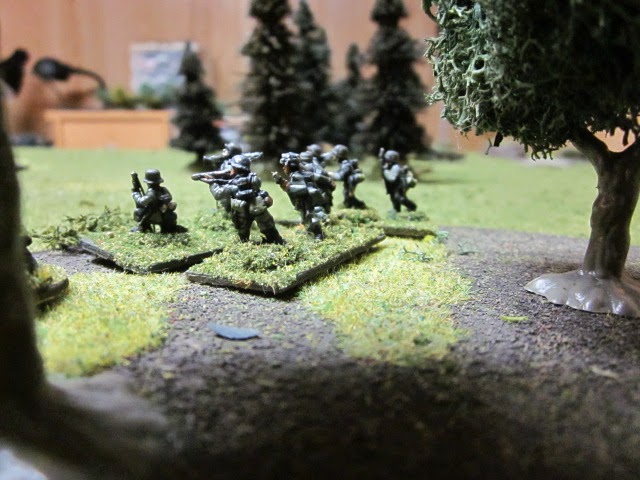 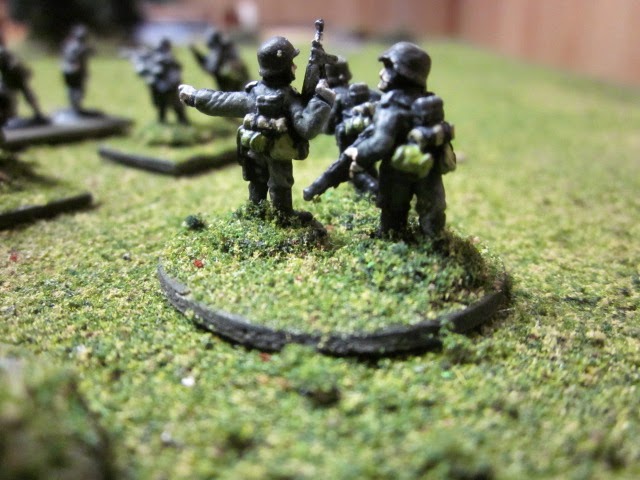 The rest of the night's game action centered on Soviet squads attempting to get close to the Germans to use their light mortars and prepare to over run them.  The Germans focused on banging away at any squads they could see, attempting to keep Ivan at bay.  I dont think I've ever had so many infantry squads "pinned" on the table at one time.

Both force break points are 16.  The Germans are currently at "3" and the Soviets "7."  I don't know when I'll get the time, but I would really like to finish this game.  I feel like I need some more buildings and closer terrain but this game had a decidedly "early war" feel to it.  Just need to field the NKVD "Blocking Detachment"! 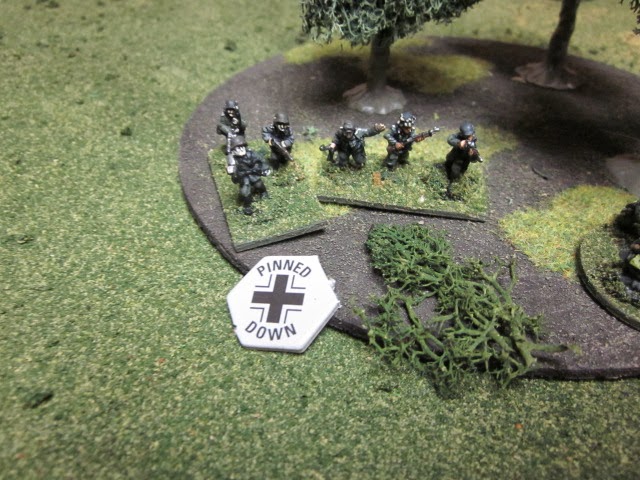 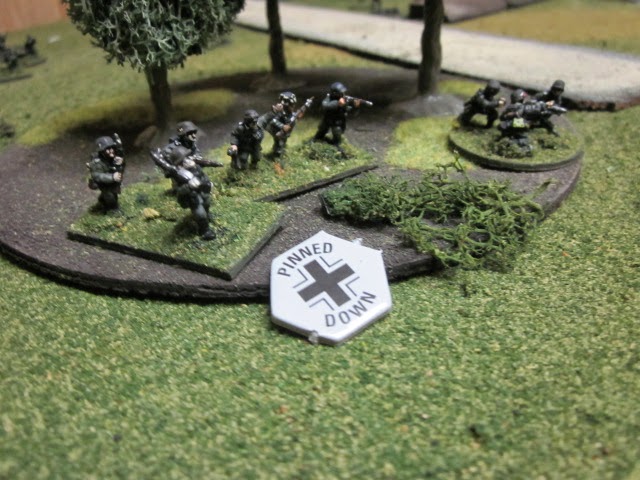 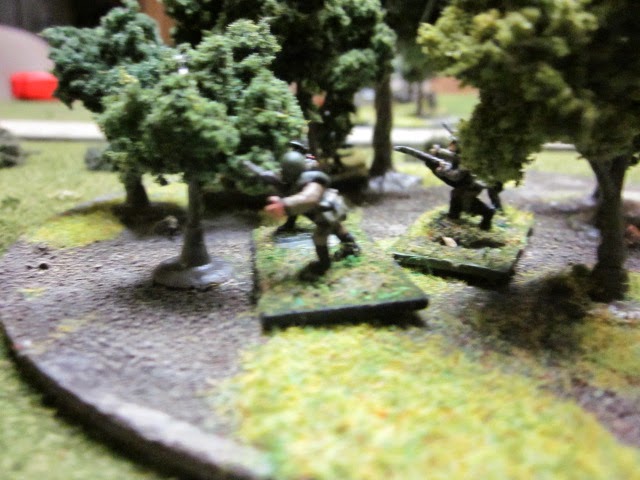 
I would like to do some more work on the unofficial modern BG supplement we've played in the past.  I have a large amount of 15mm Vietnam troops so I think "Battlegroup: Tet" is also in the works!  Good opportunity to try out all that jungle terrain.  I've also been finishing up my Soviet T-55 (T-62 stand in) force so a nice, fast-moving "Battlegroup: REFORGER" game could be in the cards for early 2015.  I'd like to paint up some more M-48 and M113 units for my Americans but that could be a very fun game.  Where can I find MI-8 models in 1/100 scale???

Lastly, I'd like to take an opportunity to wish all of my readers a very, Merry Christmas and a joyous New Year. If you don't celebrate Christmas, I hope your day is cheerful and bright regardless!

Thanks to everyone for reading and supporting this blog.

YOUR blogs, gaming, hobby work, and good humor have been a constant source of inspiration for me and my absolute favorite part of the hobby has been interacting with fellow toy soldier/gaming/history enthusiasts from around the world.

Posted by Disgruntled Fusilier at 6:19 AM