Ken and Brian came over and we played an introductory game of Snappy Nappy using a modified scenario from the Volley & Bayonet: Road to Glory rulebook.  I say modified because there wasn't enough cavalry on the table, and we also sped up the arrival timeline slightly (D'Erlon's Corps arrived a little earlier to facilitate more maneuver on the table).


Brian's French (French II Corps under Reile) showed up on turn 1 and deployed smartly to attack the Anglo Allied positions.  We kept the initial locations of the Allied positions secret but Brian was able to ascertain where the defense line was going to set up!


Brian brought his troops up the center and located the Allied positions, which he fanned out to attack!

The French II Corps fans out and brings its guns up to hit the British.  Meanwhile, Brian moves some French columns to attack the Dutch in the treeline. 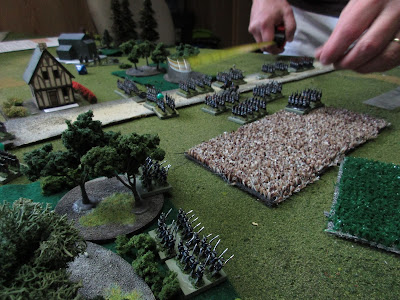 The turns progress and we moved up the timeline slightly so D'Erlon's I Corps enters the table a little earlier.  Picton's Reserve Corps, with the elite Highlanders also moves onto the table!.  They will move in on "Maneuver" orders and occupy the sunken road next to Quatre Bras. 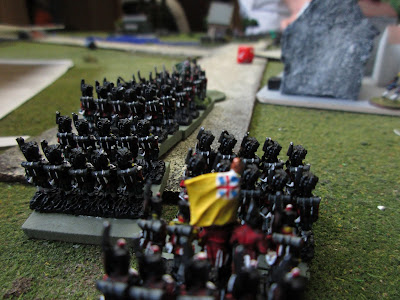 The Black Brunswickers show up.  They are actually British 10mm troops painted black with blue cuffs and collars.  Cheating?  Maybe - only took me a fraction of the time to paint them... 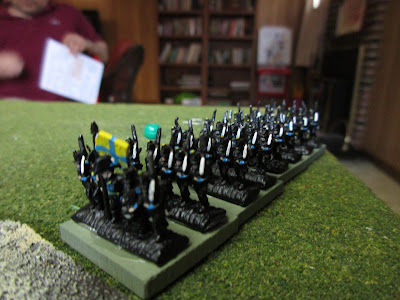 The French form a "Grand Battery" with their artillery units and start bombarding the Highlanders along the sunken road.  After a few consecutive turns of good rolling, they finally break!

We have reached turn 8 which is supposed to be the end but the French onslaught hasn't reached the second British line yet.  We decide to play another round to see if the British can hold out.  The French solidly flank the British on their left, routing 2 Brigades and the battle turns into a jailbreak!  The British fail to form a hasty square in time (not that that would have helped their morale was already starting to falter). 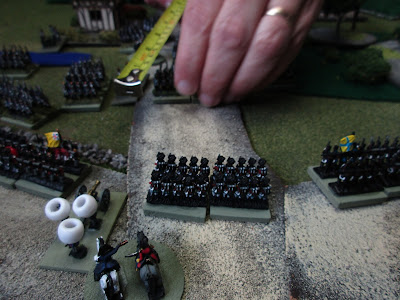 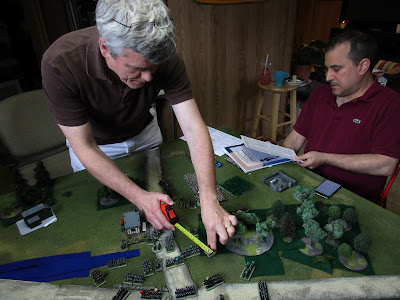 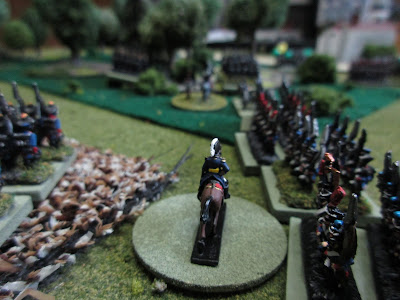 In the interest of humanity we called the game here after both British flanks have collapsed.  We were probably only a few turns from the French emerging from the Bossu woods and the British road to Brussels being cut.  This was a solid French victory!

Thoughts on Snappy Nappy
We all liked the rules pretty much.  Not sure they are as streamlined as promised, but we did play a game involving 2 to 3 Corps on a side in a little over 3 hours and that's impressive I think.  Some thoughts and observations on the rules:

Artillery is powerful!  Your cannon are potent killers (as they should be) on the battlefield.  Brian "brigading" his Artillery into a Grand Battery gave them 4D10 (for all intents and purposes) to shoot at those Highlanders from a comfortable range while the infantry moved into position.

Troop Quality is a critical component of the game.  In the interest of time we disregarded the 100 Days' OOB from the yahoo group and just made all British "Seasoned" all French "Veteran" and all Allied forces "Conscript."  While not too far removed from the OOB, placing conscripts on your flank without leadership to help rally them is probably asking for trouble.  (The majority of movement of my Dutch was retreating after a combat!)

Strategic Movement is an important component of the game.  At the command level of Snappy Nappy (you as the Corps or Army commander) the roads on the battlefield are of prime importance to your success.  Field columns only move 6" so the roads enable you to move a full foot and give you the mobility you need to perform sweeping maneuvers on the battlefield.

Corps Rallying.  Rallying your Corps is extremely difficult within the confines of the rules.  It's much easier to use your Corps Commander to rally individual brigades during the rally phase but that will put them at risk if the Brigade is attacked.


Final Thoughts?  We all agreed we enjoyed the system and would like to play it again soon possibly with Ken's Austrians and French.

Posted by Disgruntled Fusilier at 5:20 PM