Awhile ago, "Paul of the Man Cave" planted the idea that The "Skirmish Campaign" series (available at Brigade Games) would make excellent scenarios for BattleGroup: Kursk games so I thought I'd give it a try - being my "stay-cation" and all.

The first scenario is entitled "Prelude" and is a vignette from the fighting in the dusk hours prior to Operation Zitadelle kicking off.  Up and down the lines, German forces attacked and cleared Soviet forward OPs and trenchlines in order to secure jumping off points.  According to Glantz, some of these battles were savage affairs and were a gloomy omen of the battles to come as, in some cases, entire German infantry battalions broke themselves trying to secure their pre-offensive objectives the day before the Battle of Kursk officially started.


The mission for GrossDeutschland is to eliminate a forward Soviet OP that will be calling down artillery onto GD's advancing elements.  The task falls on you!

The Germans are "Veteran" ranked for BGK and the Soviets are "Regular."  Both sides have 2 full squads, an MMG section.  The soviets have a forward observer and the Germans have a platoon commander.  Per the scenario, the Soviets also have 3 guns standing by of 76.2mm artillery.  Oh great!  These scenarios were definitely written PRIOR to battlegroup kursk as they have no idea how powerful that stuff is in these rules!  Anyways onto the action.

The Germans move their 2 squads quietly towards the objective, hoping to flank it and force ivan to withdraw.

I played with my individually based troops who were originally based for "Bolt Action" but found themselves right at home playing Battlegroup: Kursk! 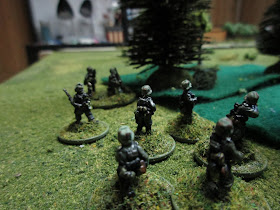 As the Germans exit the woodline on their left flank, artillery screams in overhead, erupting in blossoms of fire, shrapnel, and earth.  The fire is mixed with bursts of Soviet fire from the woodline to their front!  The Soviet FO scores well on all his die rolls and the first salvo of "crash booms" pins the weary Landsers! 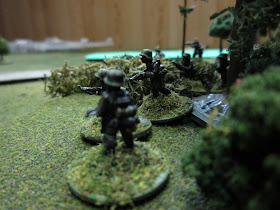 Neither side has been able to get an advantage over the other for the time and both are trading away shots at each other.
The firefights develop in earnest as a German LMG section pays the ultimate price for moving into the open, and the Soviet squad facing the German left passes test after test taking a ton of casualties before finally breaking.


The Soviet squad on the right takes 2 casualties and realizes they've had enough! 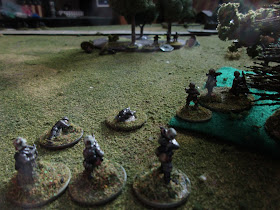 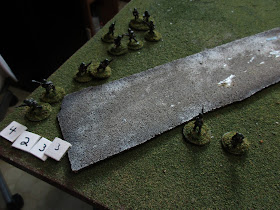 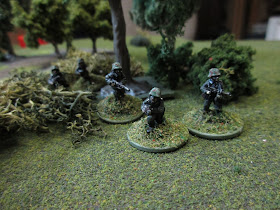 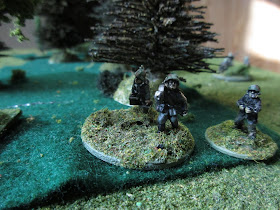 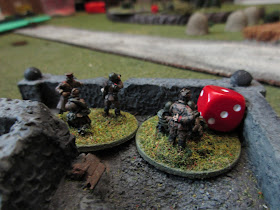