The Power Station: A Tigers at Minsk Game

*UPDATE*  Apparently I fought this battle incorrectly and placed the Germans where the Soviets were supposed to go and vice versa.  So my "analysis" below is written assuming the Germans started from the Soviet positions.  Oh boy...read on if you dare.


A cold, rainy Sunday here so I built a fire in the gaming bunker and settled in for some action-packed WWII small unit actions on the tabletop and wanted to refresh a little on Norm's outstanding "Tigers at Minsk" rules.  I rolled out the hexmat, grabbed some terrain and got to work.

Settle in and grab a cup of coffee.  This is going to be a bumpy ride!  By the way, you can read Norm's fight of his excellent scenario here.

The power station is the large red brick building in the upper-center of the picture above.  Soviet forces are massed along the "Red October Street" where the "Red October Power Plant" is located.

The rumble to the northeast signifies the start of the Soviet attack as multiple cannon batteries open fire.  The men know what comes next...

German artillery answers in kind and falls directly on the power station. 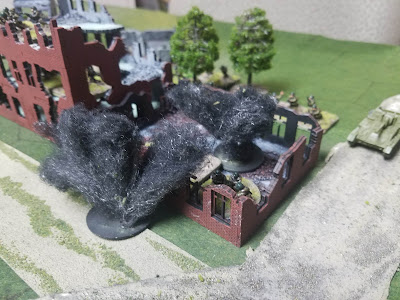 0730 Hours.
The Soviets step off onto the attack.  2 x SMG platoons pour into the power station to help defend the main complex against further German attacks.  The Soviet assault gun watching over the approach and the central square fires on the Panzer III and misses.  They do, however, draw the attention of the gunner and tank commander in the Panzer III.

Soviet shooting is generally ineffective on their first move.  The Germans referred to it as "Ivan's wake up call" in order to ensure the Germans weren't sleeping.

The Germans know that time is not on their side.  They have to kill feverishly if they are to win this scenario.  The Panzer III deals with the SU76 quickly and it's another kill ring for Hans.

Meanwhile, Feldwebel Schmidt's sewer recon patrol emerges at the German baseline after getting lost.  There were worse places to emerge on this battlefield.  Being covered by the trees in the park, Schmidt's 2 sections make use of the cover and advance 2 hexes towards the sound of the fighting.  They emerge at the base of a large water tower along the "Red October Street".


A German Panzer III pumps rounds and MG fire into the nearby train station where they've taken fire from Soviet troops. 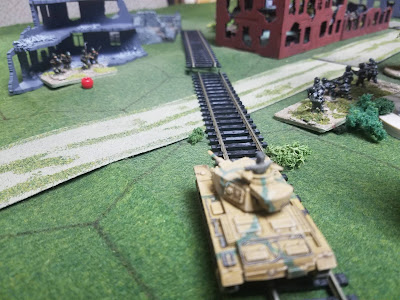 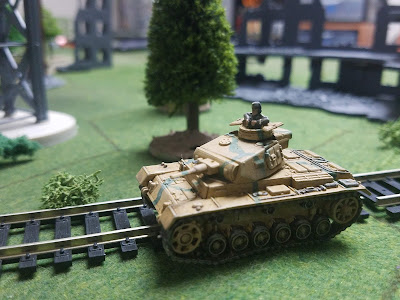 0738 Hours.  Doubles.
Both sides roll "SNIPER" on their random events table.  German counter-sniper marksmen are embedded in their squads to deal with the ever-present sniper threat.  Tough lessons learned from 4 years of constant warfare.  Guess what units both sides use their snipers on?


Soviets shoot at Schimdt's sections at the water tower and knock out a squad while pinning the other one.  The infantry squad at party headquarters supporting the HMG also is knocked out.  Germans attempt to shoot the Pak40 at the office building.  Not only is the fire ineffective, it goes out of AP ammo as well.  Panzer III pivots to shoot at infantry who have wandered into the streets.  "What the devil are those idiots doing?" marvels hands as the Russian squad waltzes out of the building.  Are they...drunk?  The panzer III shoots are the drunken infantry staggering out onto Red October street but misses wildly.  Hans was likely trying to force them back into cover in the interest of humanity.  This was to have interesting consequences the next turn as Soviet reinforcements, T-34s, enter the battle.  Remember- no good deed goes unpunished!

0743 Hours.
Soviet T-34s and tank riding SMG squads come onto Lenin Street but have difficulty maneuvering around teh burning SU carcass there.  THe lead T-34 fires and the men atop the steel beast curse.  The round goes wild and misses the Panzer III!  Soviets unpin the HMG and their infantry fire is brutally effective, cutting down the landsers in the park as well.  The German casualties are piling up and they're about to reach 5!  They're morale breakpoint for the game.

The German panzer III turns to face the T-34 down Lenin Street but misses.  They can feel their luck running out.  Hans curses those drunken bastards who are STILL out of command and STILL milling about Red October street as if there is no battle taking place!

The AT gun redeploys! 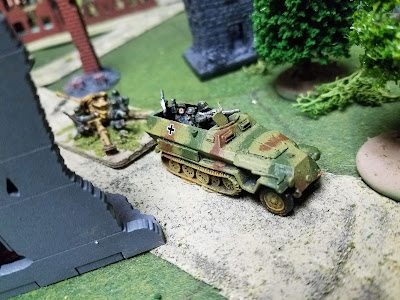 0749 Hours.
The Soviets knock out Hans and his Panzer III.  The troops on Red October Street are still drunk and milling about, out of command.  Meanwhile the Soviets, sensing victory in their grasp, pour out of the power plant in the form of SMG squads.  The Germans barely have managed to stay in the game with the arrival of 3 rifle squads back where Schmidt emerged from the sewers.

The Germans cautiously make their way forward and are shocked to find Soviet SMG troops boiling through the wooded park area and fanning out.  More German casualties bring them almost to the brink of their casualty limit again.

0753 hours.
Intense Soviet rifle and MG fire forces more German casualties and the ensuring morale checks on the force are not kind.  Most of the German forces fall back, even before they could get up to the fight to make a difference.  They throw in the towel before 8am.  The men closest to Red October Street surrender.  The men along the line of departure are able to sneak back to friendly lines. 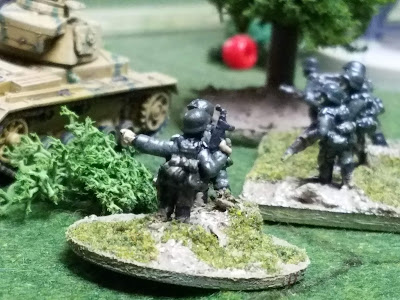 That was a pretty intense, albeit short, engagement.  20/20 hindsight it's obvious now to me that the German deployments are the key to victory in this brutal battle.  The Soviets get 2 x barrage fire missions in the beginning and it's probably wise to deploy your Germans out of sight of the Russian observers.  Additionally, even though there is much ground to cover, the Germans don't have the benefit of numbers and should deploy together to mutually support the advance.

The Armor is critical here, too and should be employed in direct support of capturing the objective.  The Soviet armor coming on can be dealt with using the Pak 40 (assuming you can keep it alive!).

What worries me the most about this battle is the fact that the Soviets have mega-numbers and can sit on the objective with overloaded, target-rich hexes.  Assaulting 3 squads in a hex is a daunting task, even if you can get some effects on the hex before assaulting it.

In this instance, i didn't have to worry about it because the Germans didn't even come close to reaching the power plant.  Speaking of which, Norm, if you're reading this, is the intent that the Soviets start within the power plant?  I assumed from reading the setup instructions that yes, that was the case.

I really enjoyed fighting this battle and I am really enjoying the Tigers at Minsk rules.  They are clean, well written and deliver a fun and satisfying game that is full of decisions, and excitement.

Norm - all I ask is that you keep developing these great urban scenarios!
Posted by Disgruntled Fusilier at 6:30 PM