Continuing with this quaint, Sunday tradition I knocked off work early today, set up my Decision Games "Saalfeld: 1806" and tried it with Norm's excellent Eagles at Quatre Bras rules.  I was able to play the game with minimal modifications. 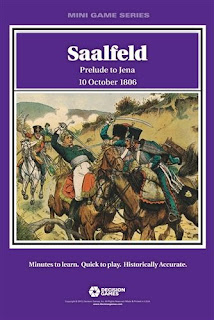 Really the only mod I had to make was with the troop quality.  The DG game has varying degrees of troop quality ranging from 3 (worst) to 7 (best).  Norm has 3 degrees of TQ "mixed ability" (worst) "reliable" (average) and "good" (best).  If the troops were 3's I made them mixed, 4, I made them reliable, and 5 or higher I made them good.

10.00am
French under Victor begin maneuvering to assault Saalfeld.  Sibelle's guns open up on the Prussian infantry around the perimeter of the town.  One of Claparede's Regiments go into columns. 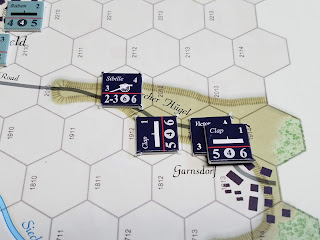 The Saxon guns go silent, running out of ammo!  The Saxons adjust their line, anchoring their defense on 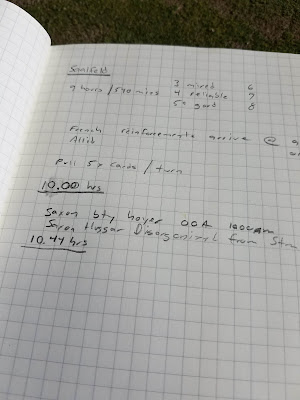 10.44am
French Cavalry under Lannes move out into the field and challenge the the allied cavalry. 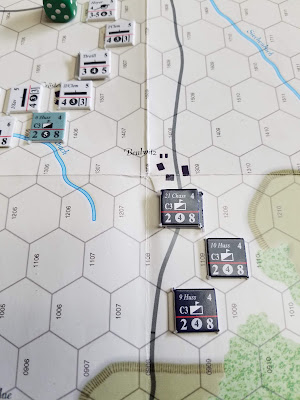 Claparede's assaults against Saalfeld are thrown back by stalwart Prussian infantry.  Even with artillery support, and asault columns, Saalfeld will prove a tough nut to crack. 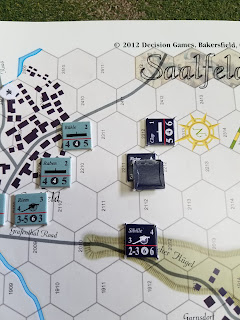 11.09am
Claparede is repulsed again and the Cavalry can't gain an advantage below the city. 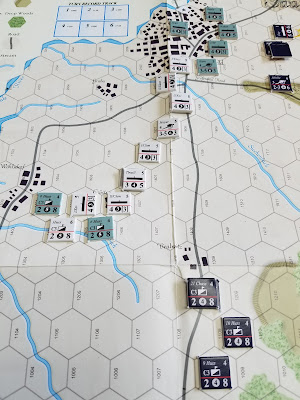 12.01 Hours
Reinforcements arrive on the field and the large French infantry division randomly arrives in the central woods. 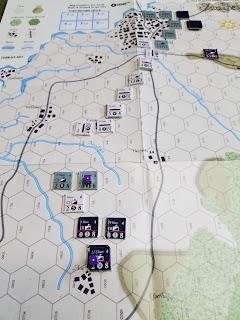 12.43pm
The swirling cavalry clash outside the city continues with the French lights getting to worst of things.  The main fighting is occurring along the highway to Saalfeld where the French have attempted to cut.


1.04pm
Suchet's attack fans out.  Claparede breaks down at Saalfeld and the French Cavalry is pushed back.  The French are getting alot of HC markers.  I forgot about the quality rule and the French have not been getting an extra die roll in their combats when the quality is higher. 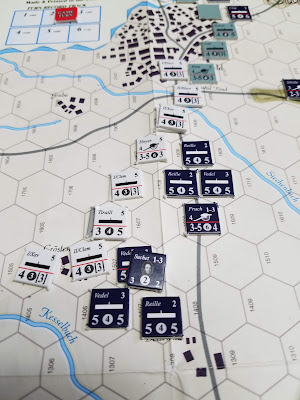 2.12pm
The Prussians start shifting units in Saalfeld while the Saxon defense starts to break up.

In the heavy combat that ensues along the Saalfeld highway, Louis is killed!  Slowly, a hole starts to form in the Saxon line and the defense is fractured.  The French though are still too beat up to exploit the gap.

3.00pm
The Allies get the jump on the French outside the city.  The 21st is knocked out along with General Lannes is killed.
3:32pm
French attacks break up outside Saalfeld.  Claparede's troops get a toe-hold in Saalfeld but can't sustain it when they're promptly surrounded by Saxon and Prussian infantry. 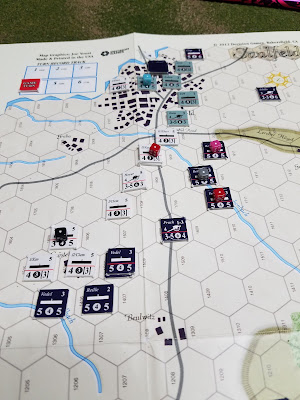 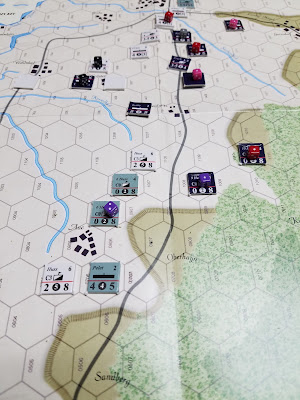 4.13pm
The French give it one more push outside Saalfeld but it's just not happening.  The French have 4 more HC markers than the allies and it doesn't look like their attacks are going to be successful.  I call the game. 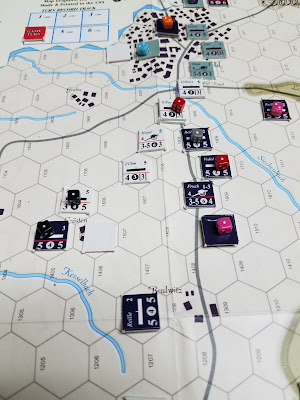 If you've made it this far i applaud your tenacity!  This was a fun diversion from my 7 day workweek.  I had been wanting to play Saalfeld for years.  The map and counters are gorgeous, even though I didn't actually play Saalfeld. I'd been jonesing to play some Napoleonics and Norm's EAQB really scratched the itch!  It's funny how quickly you forget lessons learned and there were some tricks I forgot about from the epic Christmas offensive.

Supporting units by placing brigades behind brigade in contact is imperative to keep up the assault.

Attacks are mostly inconclusive so you have to do whatever you can to keep pressure on enemy units and remain in contact.

reserves are crucial to keeping the offensive going.

If you think these points sound like a general talking to his brigade and division commanders, I think you'd be correct.  That's what I love about Norm's EAQB rules - they make you think like a general and I appreciate that.  I will admit, playing them with a boardgame set isn't as fun as playing with miniatures, but when you're working practically around the clock you'll take whatever gaming you can get!  Have a great week everyone, stay safe and keep healthy!

"Apologies for my enforced absence" of late, but COVID-19 response has literally consumed my life for the last 2 straight weeks.  Today has been the first day I've been able to sit in the gaming bunker and contemplate everything. I worked from home today, but forced myself to walk away from it all for awhile in the late afternoon.

Once the kiddos were put to bed, I sat down to play a game of Norm's "Tigers at Minsk" but since I have neither the energy nor the time to set up the hex-mat and miniatures, I played with a PanzerBlitz map and counters.  Pretty cool with a "retro" feel and no trouble at all to set up or put away.

I used the same forces from Norm's "Tigers at Minsk" scenario #4 from the rulebook.  The scenario parameters were roughly the same - capture the crossroads and the highground.  In this case, I allowed the Soviets the option to capture either hill 109 or 135 as long as they also captured the high ground.  The force composition is exactly the same as scenario 4.  Can the Germans hold?

12.00 Hours
Soviets attack in 2 columns, with the armored column of T-34s taking the covered road towards Hill 135 and the infantry column supported by an SU-152 and SU76 along with the Forward Observer taking the hilly, marshy ground to the east towards Hill 109.  All are in command except the forward observer who had better things to do...  Soviet tanks pour through the small valleys in between the balkas.


The Germans score a hit against a T-34 but that doesnt stop Ivan from coming!  note the Pak40 covering the woods near the junction.  There is also an HMG on the hill overlooking the junction.  A tough nut to crack!  Germans move the Tigers closer up from their counter-attack position.  They also remove the OPFIRE marker from the Panzer IV on Hill 109.  Das ist alles for German Turn 1. 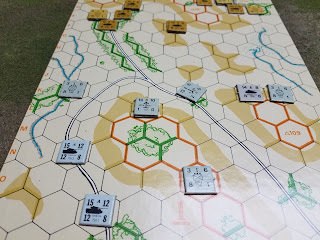 12.10 Hours
Soviet engines roar and the Germans can hear the sprockets and grinding transmissions of the T-34s as they race down the road.  The Pak40 has a fleeting target, shoots and misses!  Ivan keeps coming.  All except the FO are in command.  During the German turn, the Panzer IV on Hill 109 KO's the second T-34 in the valley and they die within sight of each other. 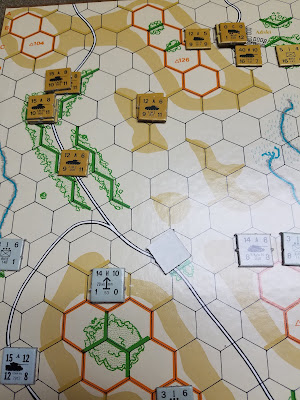 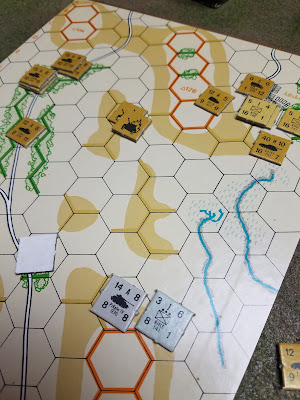 12.16 Hours.
Doubles.  HQs suppressed!  Both roll an 8 and both HQs are suppressed.  Or relocating?  Either way, every unit must roll for command check this turn. 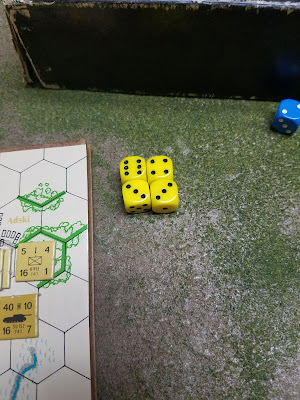 12.27 Hours
Soviets keep coming.  FO out of command again...  right column is slow to step off.  The left column infantry get into the war, move off the road and deploy to advance against the German squad anchoring the left of Hill 135.


The Soviets quickly realize they're going to have to do something about that AT gun at the crossroads. 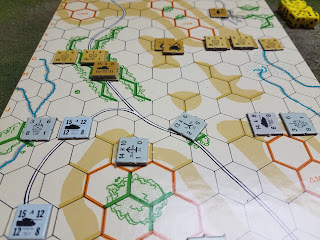 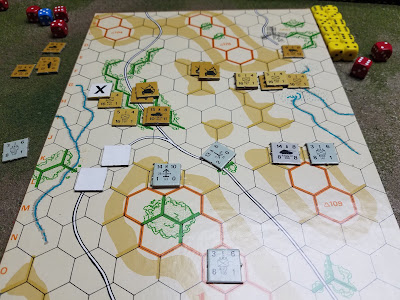 12.49 Hours
The Soviets go for broke against Hill 135.  Their infantry break from cover to assault the Tiger after taking out a German squad.  Flush with success after destroying the Pak40 with a lucky hit, they go for broke.  The Squad breaking from cover is mowed down by the Tigers waiting on the roadway.  Meanwhile things on the Soviet left/German right facing Hill 109 aren't so good, either as the Germans pin more Soviet infantry.  Should have used smoke, Ivan!  Germans fire at the SU-76 and miss. 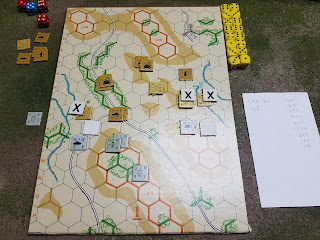 12.54 Hours
Soviet attempts to unpin are unsuccessful and Germans are having command problems of their own.

13.02 Hours
The Soviets sense one final opportunity to seize Hill 135 on the left and as their infantry broke from cover, taking the Tigers' attention, the T-34/85s break from the treeline in the covered road to assault the hill.  They didn't realize the Panzer IV on Hill 109 had a bee-line to them on their exit.  Even with the -1 for turret rotating, the Panzer IV rolls a "1" and knocks out another T-34. 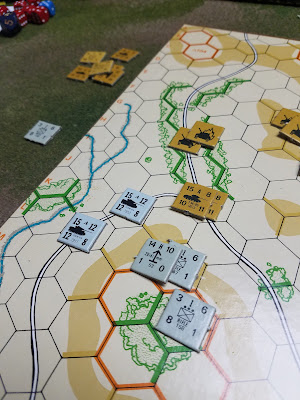 The Soviets also have some heavy firepower on their left in the form of an SU76 and an SU152.  If they can rally the infantry, they definitely have a shot at the hill, provided the turn roll is kind to them.

13.07 Hours
The Turn roll was definitely kind to them!  Can they rally the infantry in time?  The answer is no...  The armor also fails to hit anything and that pretty much sums up the career, and probably life, of the poor Kapitanets commanding this force! 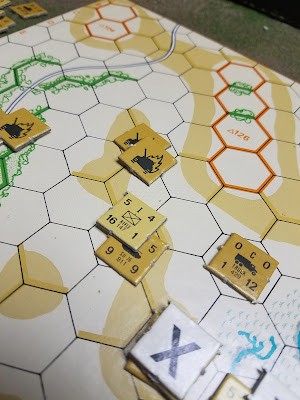 Lessons Learned
Well the Soviets didn't really have a cohesive plan.  By the time I realized there could have been mutual support between the columns, the battle was over.  But this goes to show the versatility of Norm's rules.  I literally took an OOB from Scenario 4, and selected a map that I thought looked similar to it and fired away.

The Soviets should have made smoke (allowed to start with 3 smoke hexes) and also should have had a fire support plan instead of starting with the FO on the back line!  (not that it would have mattered - the FO failed his command roll 2 out of 3 times).

The Soviets should have used tank riders and concentrated their force against a single hill.  I'd like to try this battle again.

I hope you enjoyed this small battle!  It was fun dusting off Norm's Tigers at Minsk rules.  Though I still like playing with miniatures better, this was a great way to blow off steam from what's been a very stressful couple of weeks.  No painting, no gaming (since Cold Wars) and nothing but endless, crazy work in sight.  I'm envious of all of you in quarantine right now - I'd have a ton painted by this point but duty literally calls.

Also I'm trying to keep my spirits up by reading all of the great blogs out there, and I felt a little gaming and posting on the blog might do just that.  I hope all of you have a safe week and that you're avoiding gatherings of people, staying healthy, and getting some painting done.