Alex was over the other day as we were both coincidentally clamoring for some Neil Thomas World War II action.  We used the excellent World War II rules from his book "Wargaming: An Introduction" but utilized a scenario from the ONE HOUR WARGAMES book.  In this instance, we used Scenario #4 "Take the High Ground".

The scenario seemed to fit perfectly into a Kursk operation and so the forces were reminiscent of probably the 18th Panzer Division in the North.  The Germans (yours truly) have a platoon of armor, 2 assault guns, and a platoon of infantry with some "elite" infantry in halftracks.  The Soviets have almost exactly equal forces, except no halftrack.

Alex has some great ideas for modifying "hacking" into these rules to add some nice adjustments.  As always, the spirit of the rules would remain the same.  There are many great similarities to Battlegroup in the game, which may explain my attraction to them. 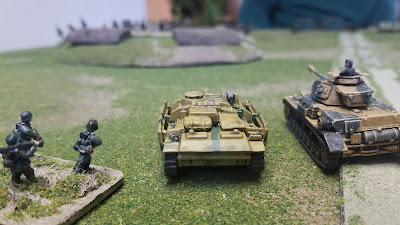 On Turn 2, all of Alex's reinforcements arrive in the form of hordes of tanks, assault guns, and more infantry.  My armor will have to peel off from softening up the hilltop positions to deal with this new threat.  Luckily, Alex's rolling is horrible (at first) and his tanks don't do much damage.  This will change.... 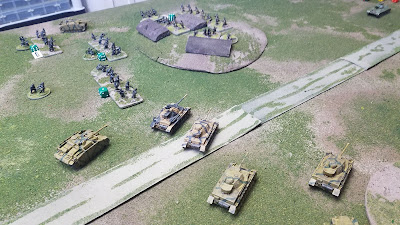 Alex's change to the rules include attaching support weapons to infantry squads.  They don't enjoy the same saves as they do in NT's original WWII intro rules.  Now they have the same saves as their infantry counterparts.  That said, we placed them in trenches - so they are super hard to kill! 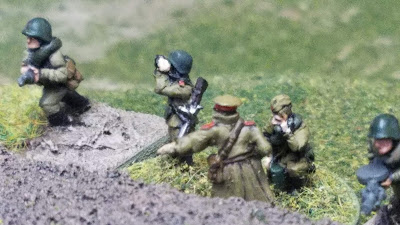 I KO the lead Soviet squad and decide it's time to throw in the halftrack with the panzer grenadiers.  My lead squad, what's left of it, assaults the hill and gains a foothold in the trenchline!  A single panzerschrecke team is all that remains!!  They're holding despite Soviet sniping! 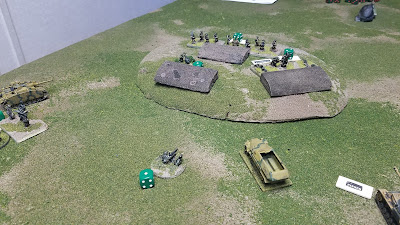 My assaulting panzergrenadiers dismount and fan out to assault the hill.  We are it!  Victory rests on us today, men!  I love the cinematic feel of the fighting in these rules! 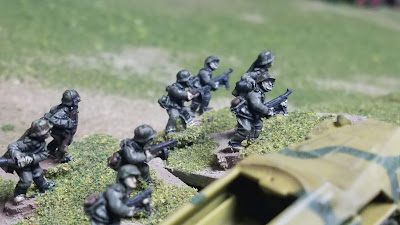 Herr Hauptmann!  More Ivans coming from the woods to the east!  Mein Gott!

Alex's counterattack begins in earnest now.  It's turn 9 and this battle is far from over.  My Panzergrenadiers still need to assault the final elements atop the hill.  Then, if they can take it, they'll have to hold it against a determined Russian counterattack!  High drama and excitement! 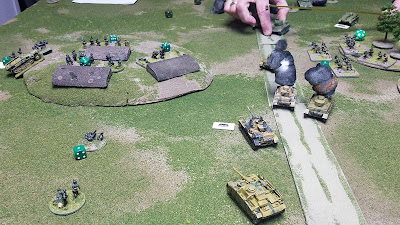 Thoughts
While Alex and I didn't finish the game yet, this game was an absolute BLAST.  I love the Neil Thomas World War II rules from Wargaming: An Introduction and I feel like they accurately capture that combined arms feel as well as the drama and excitement of infantry and armored combat.

You have to make smart decisions about resources and effort or you will be punished with these rules.  I highly recommend you try them as they have some outstanding and novel mechanisms as well such as:

Morale:  If you take a loss, you check morale at the beginning of your next turn.

HE Fire: Variable, which i love.  With mortars or field guns (artillery) you roll anywhere from 2 to 10 dice in an HE attack!  Love this!

Armor:  Simple, elegant mechanisms for tank combat which make the game go much faster.  Tanks are tough, but also highly vulnerable to infantry in terrain.

Turn Sequencing:  I like how the effects of fire on morale are variable (3 x tiers: good, bad, & ugly) and last a single turn.  This enables a close assault (enemy being suppressed really bad at close combat as they should be - so there is incentive to soften up the enemy with fires (mortars, HMG, small arms, tank fire, etc) and then finish them off with a close assault.

Granted these rules, like all of NT's rules, are not without their shortcomings but I imagine once Alex gives them his once-over he'll have some novel solutions for some of the issues we identified during play (those escape me now - ALex was taking the notes!)

Anyways, I am very anxious to finish the game and see how my Panzergrenadiers do, and if Alex's counterattack can take the hill!
Posted by Disgruntled Fusilier at 10:00 AM 14 comments:

Following on the heels of yesterday's wargaming year in review, I figured I'd strike while the iron is hot and put my thoughts and plans for 2019 "on paper."
In continuing in the tradition of only 2 main "priorities" with secondary objectives, I will continue with a more narrow scope of efforts in order to pool my most precious resources (time and money) more effectively towards the hobby.  The ultimate end state for these objectives is to finish an entire collection off resulting in a properly stored, gameable force.

PRIORITY ONE
Since World War II seems to be my most popularly gamed war around here, naturally it will remain on the front-burner but the scope and focus will change.  The last 3 years have seen the focus almost entirely on the Eastern Front and specifically the German army.  Now that we are winding down the focus on the German Army and I have a huge Soviet force, we will shift focus to the Western Front in terms of painting, production, and manpower.

It's time to finish my WWII Americans, NW Europe British, and 8th Army Desert British.  Frankly, the DAK Germans need someone to fight against and it's about time we finished them!  So upon completion of the SS Companies, production shifts over to the Americans first, and then the British Army with the ultimate goal of BATTLEGROUP games, Tigers at Caen games, and any other games that might come up on the horizon taking place in Western Europe in 1944-45.

PRIORITY TWO
Last year the AWI project was a miserable failure.  You couldn't have known this but last year when I was writing the priorities for 2018, the plan was always to complete my AWI forces, then shift gears to the American Civil War.  SO this year's plan is more ambitious than last years!  We are going to embark upon THE AMERICAN HISTORY PROJECT.

This will see my American War for Independence Armies, SO CLOSE to completion already, be knocked out early in the year, after which time I'll transition to the American Civil War and finish them off.  My ACW forces are in about the same shape as the AWI and are really just begging for a month of work on them to call them complete.

SECONDARY OBJECTIVES
Some secondary objectives of mine will be to continue work on my Fantasy Forces (Orcs and Empire), begin my Ancients project in earnest, begin my World War I project in earnest and continue the 6mm project, eventually branching into World War II from moderns, once I finish the Team Yankee 6mm overhaul.  In the Napoleonics realm, I still have more 10mm Austrians to complete, and really start my 10mm Prussian force, of which I have a very small army at present.

In terms of gaming plans there should really be something for everyone down here and I have some really neat games planned.  For some of these games below, the miniatures are completed and all that is needed is to do the research:

GAMING PLANS AND IDEAS BY SCALE

That's all for now.  I know there are some other ideas that i did not post to here so as I think of them, I'll come back and update!  Meanwhile, Alex and I played an outstanding game of the Neil Thomas Wargaming: An Introduction World War II rules today.  I will post those tomorrow.

Where has the time gone?  It seems like a week ago, Dave, Alex and I were at the FLGS "testing out" Alex's "UP THE BLUE" World War II rules [click] on the night before Thanksgiving of 2017!

Fast forward to today on Saint Stephen's [click] day 2018, we are reflecting on a year of gaming, painting, research, and fun.  Not nearly as much as I would have liked, but is there ever enough gaming or miniature collecting?  Grab a cup of coffee and settle in for an epic recap of gaming.

The priorities going into 2018 [click] were simplified down to 2 "main" focus areas:  WWII, and American War for Independence.  Terrain was an additional focus area that I think we did very well with, all things considered.

So how did we do against the priorities?

Well if you measure success by figures painted and games played, then the World War II "campaign" was indeed very successful: 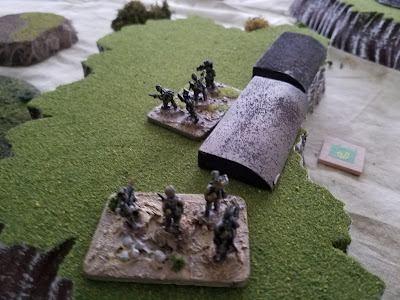 World War II definitely got its fair attention during 2018.  It almost seems as if 2018 was the year of World War II here at SOUND OFFICERS CALL.  How did the other campaign go?  Sadly, measuring success against the efforts above I'm afraid the AWI fell far short of my expectations.

It seems that January 2018 started admirably with a big push to complete the AWI project [click].  I will say that there was some great progress initially, with the completion of a loyalist militia unit, ALL of the artillery and commanders, and basing.

That said, we fought ZERO battles this year in the AWI.  While not giving excuses, I will say that time got away from me this year, as evidenced by the small number of posts.  2 young kids and a promotion at work will do that to you.  [not complaining here!]  Also there were many, many
secondary projects that took up my time.  [again, not complaining here!  Any wargaming progress is good wargaming progress!].

With the coming of 2019, we will continue to incorporate AWI into the project plans, but with some friends.....

Now onto the REAL victory of 2018 - my terrain!  I couldn't be happier with the progress in the terrain department.  We re-did the gaming board with some new techniques, completed the desert board, and standardized World War II basing so the ground texture and colors completely match the table.  We based all of the trees so the tree-bases will match the table, and also started work on new fences, craters, hills, and roads.  It was a good year for terrain here at SOUND OFFICERS CALL. 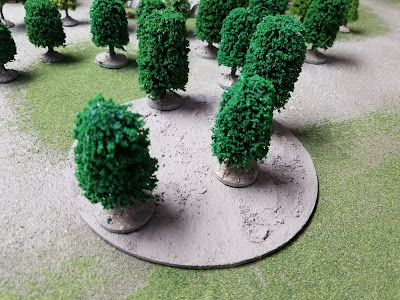 Secondary projects took up alot of my time this year as well.  The 15mm and 6mm Cold War project saw a great many games take place in the Fulda Gap using Team Yankee, Battlegroup: Moderns, and Sabre Squadron, both here in my gaming bunker and at Ken's house.  All part of the "World War III Project" that probably needs resurrected this year in 2019!

We also played a bunch of Alex's OIL CHEAPER THAN WATER playtest games in the Sinai with 6mm Cold War gear.  Speaking of the Sinai, we played a historical 6mm Fate of a Nation MEGA GAME in the Sinai just this past week!

Fantasy finally made its way onto my table with Alex's SPEAR TO THE STRIFE rules being fought with my Kallistra and GW Orcs and Empire forces.   We also played a bunch of games of ONE HOUR WARGAMES Dark Ages/Medieval with my fantasy figures and my daughter (who won every game) 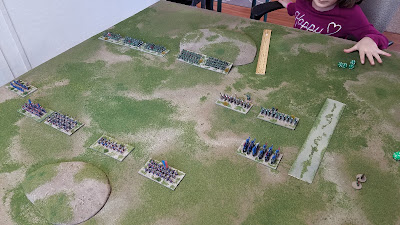 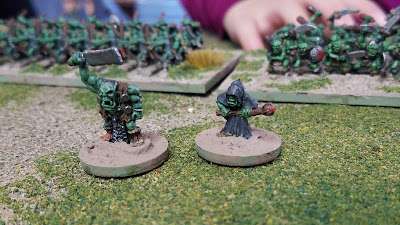 Speaking of Alex's rules, Alex helped round out my Grand-Tactical spin on Neil Thomas' One Hour Wargames Horse and Musket rules and we have played many battles with them as well, most recently EPIC Talavera, Lobositz (SYW), Teugen-Hausen, and Quatre Bras.


So that's it for my 2018 recap.  It was a great year for gaming, and terrain.  Apparently no-so for the AWI, but it was still a very exciting gaming year!

Here is a teaser for one of this year's coming priorities.  Any guesses? [click]

Posted by Disgruntled Fusilier at 10:50 AM 18 comments: