"Initial progress reports received at Army Headquarters from their attacking divisions did not leave much to be optimistic over.  Ammunition expenditures, casualty rates among the lead divisions, and of course supply constraints were problems that were keeping the Army commander up at night.  What was infinitely more troubling however was the failure of the lead divisions to capture their D+1 objectives.  The 1st British Corps was not folding under the pressure as quickly as Front's planning calculus had anticipated, and the British reluctance to give ground was not allowing the Army to achieve the freedom of maneuver it needed to reach the Weser River on time."
-Major Fyodor Antonov,  Deputy Plans Officer


Ken and I were finally able to link up and play a larger game of SABRE SQUADRON with the "proper" rules that arrived in the mail last week.  (ironically, when we finished the game and I walked out of Ken's house, the rules were sitting there on his porch but he had the PDF copy and I brought my hard copy with me). 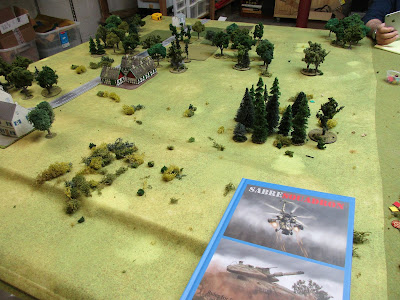 The game was a "Planned Attack" from the SABRE SQUADRON rules allowing me 2 x more points than Ken, preparatory bombardment, and Ken was allowed to dig in initial battle positions, and emplace 2 minefields!

This game would feature my Soviets, consisting of 2 x T-80 platoons and 1 x BMP-2 mounted infantry platoon squaring off against Ken's magnificently painted Chieftain main battle tanks and FV432s.  In order to bolster my points, Ken let me use his BTR80 platoon along with some Flames of War WWII Soviet infantry.  Ken subbed his WWII British infantry for modern Brits but you couldn't tell much from the pictures.  We played using Ken's table and outstanding terrain.

The Soviet objective is to capture a small village on the ridgeline on the far side of the board.  Lots of terrain on this board ensured a much more challenging game, and Ken made full use of it to slow me down, forcing my infantry to leave their comfy BMPs and BTRs early to try and dig British squads out of their positions. 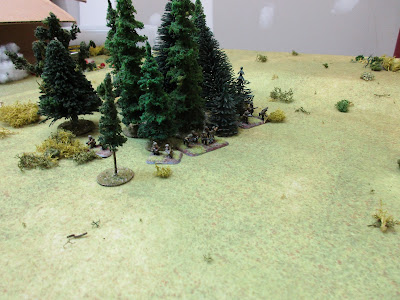 The plan was to send the infantry up the forested area, taking a covered route to the objective, while the armor moved through the gap in the tree-line to provide cover fire for the infantry to seize the village.  I have only 10 turns to capture the town. 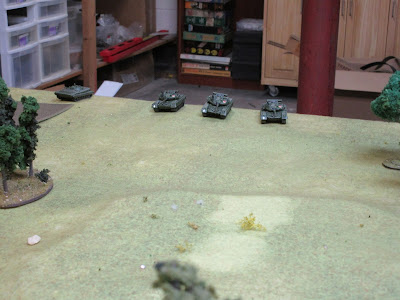 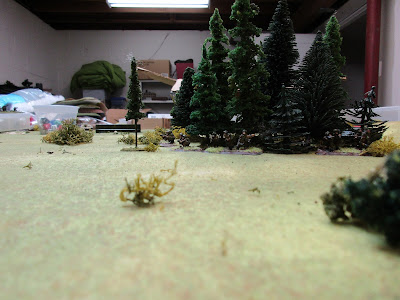 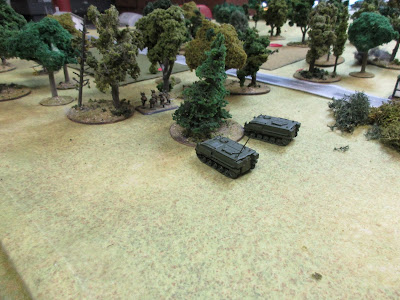 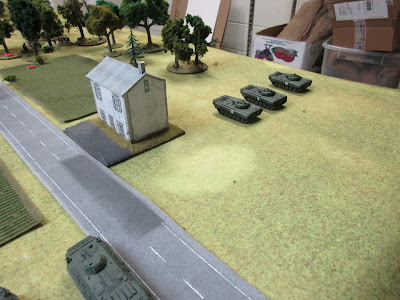 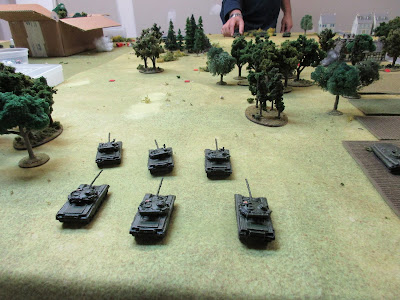 Due to the command confusion rules, I was forced to managed traffic fairly well but this also canalized me in the gap and stacked up my armor moving into the attack in order to not mix platoons up.  The result was that instead of forming properly for the attack, 1 x T-80 platoon moved first and was immediately engaged by Ken's Chieftains on the opposite ridge.  Once again, Ken's great use of the SABRE SQUADRON action options enabled him to take quick shots at me, then duck into cover. 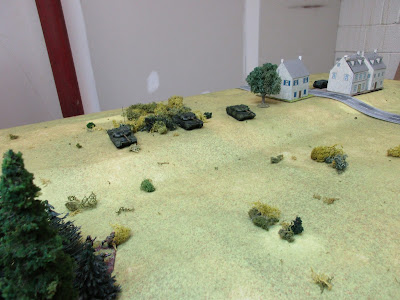 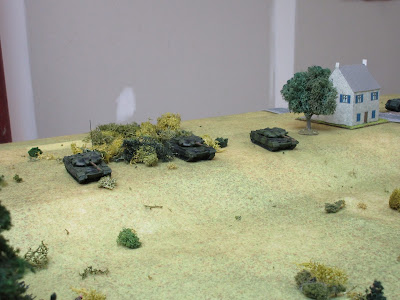 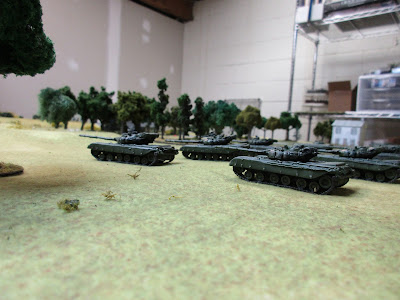 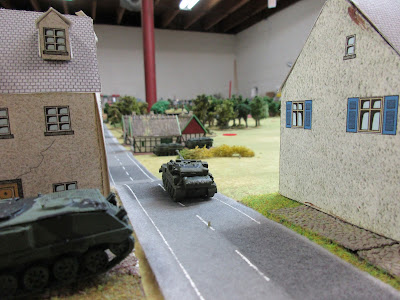 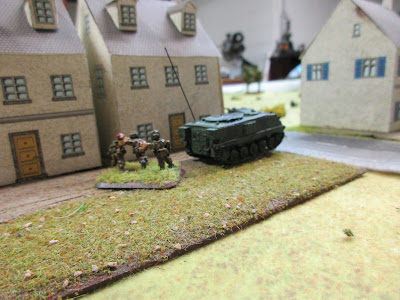 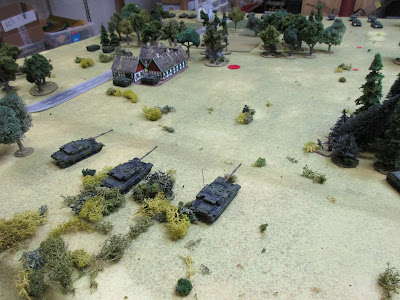 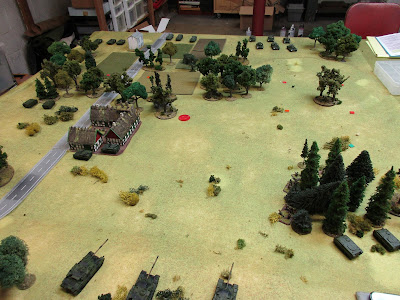 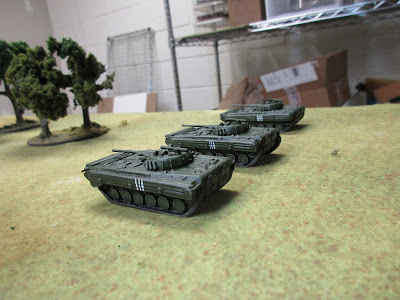 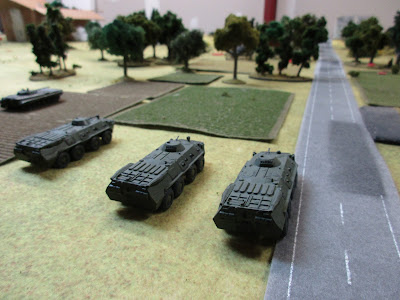 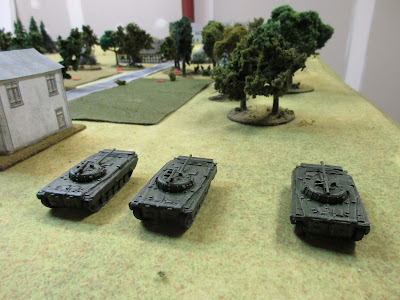 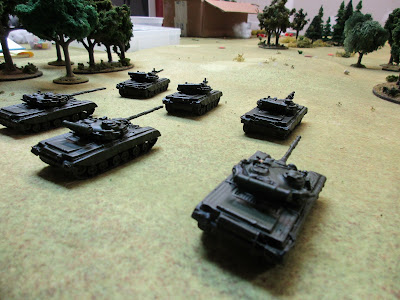 The initial, preparatory bombardment only beings after all of your the enemy's units have entered the table, so really the beginning of turn 2, as the Soviets are stepping off on the attack, the steel starts raining down on the British positions.  The initial barrage is really something and knocks out a couple FV432s and a Chieftain on the ridgeline! 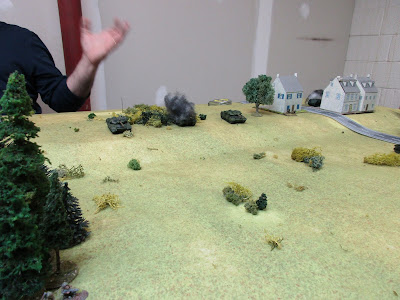 As an interesting aside here - the penetration and armor protection statistics of these 2 Cold War heavyweights ensure that a hit achieved by either the Chieftain or the T-80 on one another will most likely result in a kill - reminding me of the old adage from training "if you can be seen, you can be hit.  If you can be hit, you can be killed."

So with my armor making beautiful targets for the Ken's artillery by being bunched up on a small hilltop, my infantry was forced to push through forested terrain (open forest, but still unforgiving on movement) in order to locate the British defensive positions.  Ken wisely held his fire and kept his unit out of the tree-line.  I sent the attack in to capture the first position and dismounted my infantry to flush them out.  Ken moved his infantry back to try and get to their FV432.  I finally was able to push a squad through the British minefield on the road and dismounted a squad to engage Ken's Brits at the rear edge of the woods.  First contact was made and a firefight started to develop on the right!

Meanwhile on the left, Ken's artillery arrives on top of my T-80s but doesn't kill any of them.  That's OK his direct-fire more than makes up and by turn 5 the lead platoon loses 2 T-80s with #3 suppressed.  The second T-80 platoon is working its way around the lead platoon which has started the war in a most inauspicious manner... 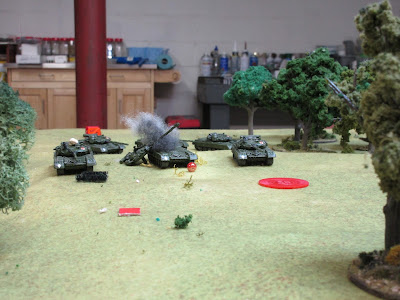 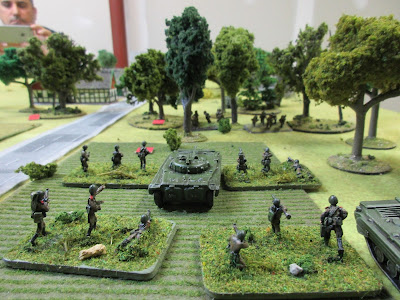 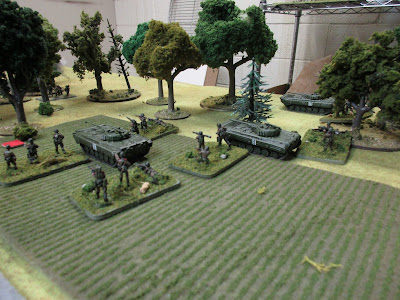 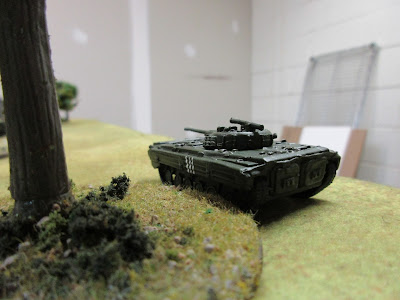 So far a very fun and satisfying game although we still have numerous questions about the rules (more so, it seems than we had with the introductory rules?)

I will go over some of the things I liked and disliked about the game and full rules thus far.

I really like the differentiation between prep artillery fires and calling for and adjusting artillery fires during the game.  There is a marked difference in the process with prep fires being much more abstracted and feeling "out of your hands" as the commander.  It's a great rule.

Speaking of great rules, I like how in this scenario the defender gets to place the remainder of his forces on the second turn.  This accounts for hidden positions nicely and gives the defender an advantage, accounting for pre-sighted weapons, range cards being filled out with dead space marked, and the defending soldiers having a better feeling or understanding of the ground than the attackers, as it should be.  It's a refreshing rule that takes this set above the rules currently out there.

Again, kudos to SABRE SQUADRON for the "everything on a 5+ / 1D10 die roll" or you can do anything on a modified roll of 5 or better on a 10 sided dice.  It speeds up game play considerably.

The full rules are very comprehensive in terms of main battle tanks and infantry fighting vehicles.  I would have liked some stats for Soviet tracked recce but it's completely understandable that they weren't in there yet.  That said, we used the stats for the BMP2 for my BRM recce.  I think that's a good compromise.

I also love the range rules in SABRE SQUADRON.  Tanks can range most of the table on a large sized table and that gives them a deadly advantage during the game.

The artillery seems even harder to get when it's on-call and I believe it's a forcing function to make you purchase organic mortars.  I didn't research it, but I'm willing to bet the 120mm self propelled mortar is a nasty SOB in this game.

There are some things we will need to clarify prior to completing this game (Ken was nice enough to offer to keep the game up!).

Infantry fire - we played with infantry fire in the last game but for some reason seem to be even more confused by it now.  Our first infantry firing scenario was a "messy" one with multiple units in and out of cover, multiple weapon systems, etc.  We haven't closed to close combat range yet either but I'll bet it's going to be a mess the first time we try it.

The issue with terrain and the status of hill crestlines will need to be figured out.  Is the terrain "what you see is what you get" or is it more abstracted?

Also, and I will preface this with a warning, be careful what you wish for.  I wished for a revamping of the infantry movement values from the introductory rules and they have been updated.  Needless to say, I now prefer the older, intro rules because they calculations were done for you in regards to movement.  (I didn't like fractions, even easy fractions, in 4th grade and I don't like them now.)  I think the way around this is to make a cheat sheet that has the movement calculated.

The full SABRE SQUADRON rules have "movement segments" listed with the effects that terrain have on your allotment of "movement segments"  Those segments are the total inches you can move.  So if a tank has 4 "movement segments" and 1 "movement segment" is 2 inches in a given terrain, you get 8 inches.  I think it would just have been easier to calculate it for us.  It does allow for more variations or terrain restrictions on movement and allows for varying effects on the force, but I'm a lazy gamer above all else with a mere 2 brain cells to rub together.  I would prefer to spend those calculating my tactical plan and not figuring out if I can get my BMPs up into the woods or not.

Again just my preference.  I love the rules.  I will keep playing them!  I can't wait to complete this game.