I promised no more onesie-twosie pictures of The Eylau Project but rather a periodic update when a milestone has been achieved.  That first "big" milestone is the completion of the III (French) Corps under "The Iron Marshall" himself, Louis-Nicolas Davout.  While my Davout figure is still unpainted, his troops are battle ready and spoiling for a go at the Russians, Prussians, or whomever else would dare challenge them!

They are based for Blucher, Eagles Cheaper than Brain Cells, Volley & Bayonet, Commands and Colors, etc - any rules where a stand is a brigade.  I do not think the labels on the back detract in any way from the miniatures.  I actually feel they enhance them.

I couldn't decide if I preferred the units in battle lines or in assault columns and so put a mixture of both on the bases.  There is a unit of columns that are abreast and not staggered and I quite like how they turned out.  The mounted commanders also look good with the bases. 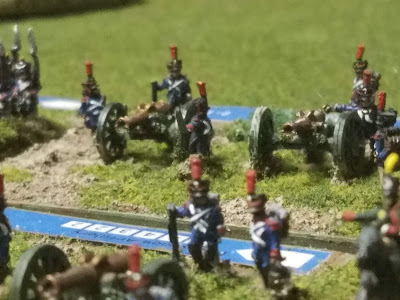 A real sense of progress here as an entire Corps is completed.  There are still 5 more to do!  Ken has been working on his Russians and Dave the Prussians.  IV Corps under Soult is next.  Wish me luck!

Tactical Exercise without Troops: Tigers at Caen on the Mapboard!

Not much time for gaming recently (although I was able to link up with Ken for a very quick game of Crossfire) but I wanted to get some of Norm's "Tigers at Minsk" on the table, although set on the western front with Americans.

Rather than go through the bother of setting up minis, I felt this would be a good opportunity to try out TaM on the Western Front in 1944-45 with the ole' classic Squad Leader counters.  As has already been shown in previous posts here, the transition was seamless.

The mission?  Seize this "lightly defended" village from the Germans.  Here you are given 2 x platoons of American troops, along with an MMG section.  Starting farther back, you only have one hour to take the village.  You will have to balance speed along with risk to meet your objective.  The objective is the large building at the top of the map.  Good luck, Captain!

With such small forces, the turns are pretty seamless and some of the more nuanced changes from Norm's West Front module dont really impact play here.  Both sides have standard command (2 hexes allowed to be in command).

Both 1st and 2nd Platoons step off from the Line of Departure headed towards the objective.  One of the squads from 2nd Platoon (on the right) is out of command.

Americans making slow progress through the woods.  The HMG in a stone farmhouse opens fire on 1st Platoon's left flank in opportunity fire.
.
1124 Hours
Germans reinforce the front line with their reserve squad.  American OP Fire is ineffective from the 1st PLatoon.  Americans still trudging up to the front. 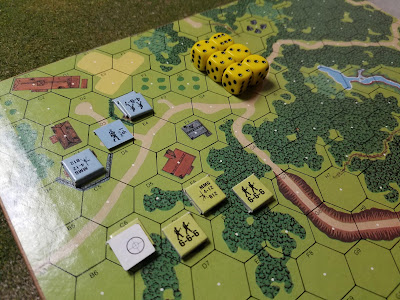 1132 Hours
1st Platoon's 1st Squad far left goes out of command and the US Company is having a hard time keeping its far flanks in command.  Heavy shooting from the US 1st Platoon and the HMG pins a German squad in the stone house.  The American 2nd Platoon on the right occupies a row of houses in the tree line to suppress the German defenders.  German OP fire is ineffective against them.  Lots of shooting from house/building to house/building now.
The American Commander is eyeing his watch now... 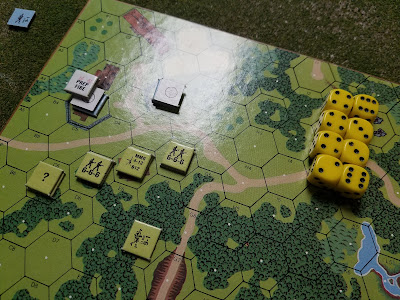 1139 Hours
The German HMG that was pinned rallies in front of 1st Platoon in the stone house.  The Americans probably should be getting their act together to assault the houses but choose to shoot instead to continue to try and pin the defending Germans.

1147 Hours
Doubles!  US rolls "men of action" and the Germans roll "HQ Suppressed".  The clock is ticking.  This is perhaps the impetus needed to get those GI's moving across the road and assault that village!


1151 Hours
The US 2nd Platoon is ordered forward against the lone squad on the German left.  They move forward and German OP Fire is ineffective against the 2 squads!  1st Platoon throws smoke to assault the HMG Position in the stone house.  They're out of smoke for the rest of the battle.  The GI's break from cover to assault!  Heavy German fire causes a pin against 1st Platoon in the smoke. 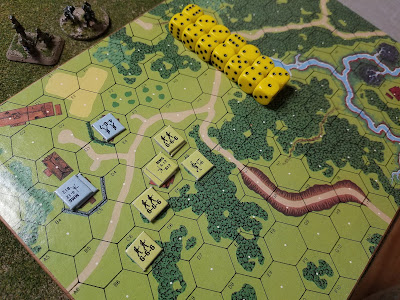 1201 Hours
Time is up.  The Americans at the outskirts of the village are out of time.  I end up fighting both assaults anyways, and both are repulsed!  The Germans win this one. 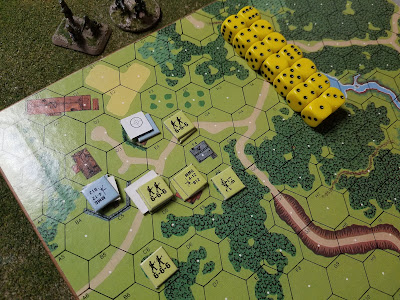 Lots of fun with this small scenario.  While not balanced in terms of forces, the Americans are starting farther back and must cross much ground just to come to grips with the Germans, who are defending a row of buildings.  Overcoming those buildings proved too difficult for the US commander.  In hindsight?  The entire company should have focused on one single section of the line to breach - probably the stone house with the HMG.  That would have enabled better use of the smoke, and would have increased the odds of a success against in close combat.  In this instance, combat broke down into smaller engagements by-platoon.  A lesson learned for next time.  I'd like to try this with armor as well to see how that goes.

Some modest progress on teh hobby front as Davout's Corps for Eylau is almost wrapped up and I play more Crossfire.  Stay tuned!

Posted by Disgruntled Fusilier at 7:53 AM 13 comments:

Email ThisBlogThis!Share to TwitterShare to FacebookShare to Pinterest
Labels: Board Games, Squad Leader, tigers at caen, Tigers at Minsk

When I was in the Army, I hated field exercises.  Well - the lead up to them, anyways.  I always dreaded changing my routine (and the 36 hour days without sleep, discomfort, and MREs).    When we were out in the field, however, I usually had fun.  The old adage of "we do more things before 9am than most people do all day" certainly held true.

So this morning around 530am, I found myself in the gaming bunker with a cup of strong black "Army" coffee and figured I could put some very basic forces on the table and practice some basic scenarios over and over again.  Basically these were "field problems" with a platoon attacking and a platoon defending.  These were "meeting engagements" with a force designated as the attacker and one as the defender.

The mission for today's training exercise?  Eliminate the enemy platoon!

And what were those objectives, anyways?  Well there is a basic setup for our field maneuvers today.  A farmstead with a ruined farmhouse, small cornfields, crops, and 2 hills.  The American and German platoons will take turns beating the hell out of each other and I played no less than 4 engagements in a short amount of time.
Both sides have 3 x squads, a +1 Platoon Leader, and a Medium Machine Gun section.  Textbook CROSSFIRE forces!  Note there are 6 terrain features on the map.  I diced for first movement. 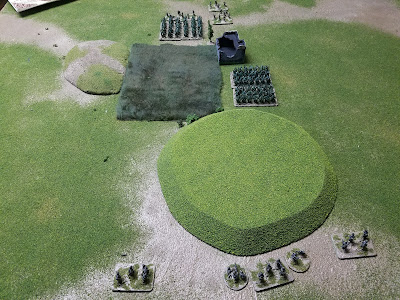 The Americans move first and move up the MMG and a rifle squad into the cornfield.  The Germans have positioned a squad as "flank guard" and it opens fire on them.  Lucky shooting suppresses the US MMG and the initiative switches to the German force, who immediately move their force up the hill for overwatch of the position.

Since the MMG is a centerpiece of the US plan, they have to attempt to rally the suppressed MMG in the cornfield.  THe US player moves the platoon leader south towards them, but they are pinned down by fire from the hill!  THe platoon command group, radio telephone operator and all hunker down in whatever cover they can find, trying to crawl up into their helmets, pinned.  Another German squad attempts to react and goes NO FIRE. 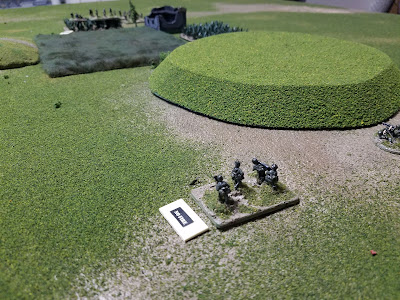 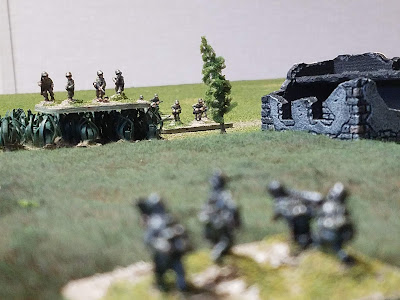 The German player and the remaining US units trade fire.  At one point, the Germans dash into the cornfield in an effort to get the US player to shoot - he does and misses - going NO FIRE.  This is it!  THe Germans rush the farmhouse!

I played the same scenario again, same forces and the US player wiped the Germans out due to bad German luck and a very bold US plan.  I eventually played this same scenario another 2 times (4 total) and the results were even 2-2.  Most of the results of the games came down to launching a timely assault against a NO FIRE enemy squad, or excellent shooting from a CROSSFIRE, and blasting a suppressed squad either off the hill or out of the farmhouse.  I had great fun "walking through" and exercising CROSSFIRE today.  I may introduce another platoon on each side, a bit more terrain, and possible some mortar fire missions for each side.
I was thinking it would be fun to battle for this farm again with multiple rules sets, including Iron Cross, Norm's Tigers at Minsk, and the Neil Thomas "Wargaming: An Introduction" rules.  The Crossfire rules, once staples of mine, came back to me quickly and with no fussiness.  They really are a splendid set of rules that really work - and even more surprisingly - are decent for solo play with a manageable amount of forces.
Anyways thank you for joining me today on this little "Field Exercise".  More to come!
Posted by Disgruntled Fusilier at 7:18 PM 21 comments: