The Battle of Shiloh with Altar of Freedom (big post!)

I can't think of a better way to bring ACW Month to a close here at SOUND OFFICERS CALL than to host a hard-fought ACW western theater battle on the tabletop with Ken and Dave.  The battle?  Shiloh, of course, using the tried and true "Altar of Freedom" rules by Greg Wagman.  Sit back and get ready for "the devil's own blog post" as we rewrite history (sort of - I'll explain) . 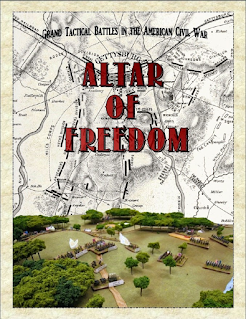 About 6 months ago, Ken and I embarked on a joint project to paint and base up units for the introductory Battle of Shiloh in the AOF book.  About 20 brigades per side in 10mm - totally doable.  Ken brought over his outstanding CSA troops.  The Union troops are mine.  We're using the 6mm bog standard values including basing from the book.
I deployed the Union forces almost exactly historically, using a map from the American Battlefield Trust website here.  I did place Sherman's Division in reserve with the intent to form a powerful second line for when the jailbreak occurred at the sunken lane.
Dave deployed the CS forces roughly historically, with an eye to pin down valuable Union divisions on his left to keep them from reinforcing Pittsburgh Landing.

Dave is getting the hang of the modifiers and the unit capabilities for the first few turns.  He commits a modest number of brigades and batteries (Dave is an artilleryman by trade!) to "probing" the sunken lane and a couple of CSA Brigades are sent packing, but Dave is proving skillful at using his artillery to silence my gun batteries in support.  This will make breaking up Dave's attacks that much harder!  Once he's able to mass forces against the sunken lane, it'll be curtains for sure!


DAve is massing the CS forces along 2 avenues of approach directly towards the sunken lane and the hornet's nest crossroads, just north of Shiloh church.  I'm nervous that I won't be able to hold out against a 2-pronged assault.  It's not looking good! 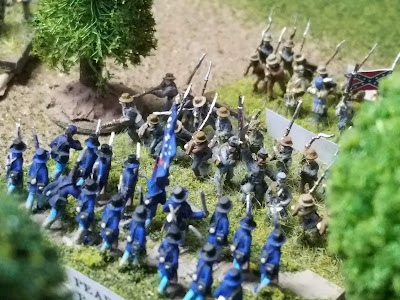 Dave launches some limited attacks against Prentiss' Division near Shiloh Church and Prentiss is pressed back.
Unbeknownst to me, Dave is hamstrung by how he can spend his points.  Worse, Polk, one of his Corps Commanders is "inept" and there are restrictions on how he can bid his points.  It makes Dave's point bidding to "activate" Divisions that much tougher.  Meanwhile I have US Grant (for now...) with his 20 points.  I have no trouble bidding 6 points, or 5 points to multiple divisions where i need them.  I can also "afford" points-wise to dedicate points to control the turn clock, although I'm rolling badly for the first few hours and rarely able to. 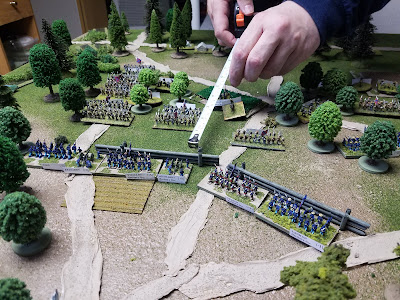 By 1pm, Dave is getting "dangerous" with the rules and flanks the Sunken Lane masterfully, after pushing Wood's Brigade through the woods.  He's using his artillery really well at this point and movement by my elements in the Sunken Lane position are getting beat up pretty bad by artillery fire.  I feel it's time to evacuate the position, having held on there and absorbing numerous Rebel assaults (at least 8 by my count now), counterattacking, and being pushed back, it's time to leave as Sherman's men have formed a new line behind the position.


Dave is gathering combat power in the Sunken Lane now.  It's important to note that he's only about 8inches (through woods) from Pittsburgh Landing now.  Maybe 10 but still.  He needs to start chipping away at the Union Line.  Sherman launches a desperate counterattack against the far Rebel right and the USS Tyler makes its presence felt and shells the REbel columns as they flood north to attack Sherman.  The battle is getting extremely close, now.

Post Match Thoughts (there are many)
WOW what a battle!  We started at 1100 hours and ended at 5pm when Dave and Ken had to leave.  This was an epic game that played and read just like a Civil War battle narrative from a history book or personal account.  I felt completely immersed in the game as the Union Commander, and felt the weight of my mistakes (there were many!) and decisions throughout the game.  Bidding is tough and literally watching your opponent take the initiative in a crucial section of the battlefield because you were "cheap" and only bid 4 points was devastating!
The use of artillery in the game is genius.  Artillery may make "interrupt fire" possible (fire by the defending player) to break up an enemy attack, just as it was historically used.  Key considerations are the placement of your artillery throughout the battle to support your attack or defense.  Dave got a devious satisfaction out of bringing his guns up to point blank range to pry stubborn Union units out of their positions.
There are some other outstanding and novel features in AOF such as the free facing change/adjustment and the whole use of points and bidding allowing you to do certain things like make additional movement at the end of the turn (if you had points saved up).  This is a game where you spend much less time looking at rules, and much more time fighting.
Additionally, movement is not at all fiddly.  It's loose enough to allow you, the Army General or Corps Commander, to focus on the movement of troops and establishment of positions, NOT movement rules.
Personally I love the unit labels as I think it's much more impressive and flavorful to be pushing "Veatch's Brigade" around instead of "a Union unit" around.  Surprisingly, this makes a big difference and is making me think twice about labeling units in other games.
Game Length
Shiloh is a tough slog and the mostly-wooded terrain means units are moving only 4" throughout (Dave thought it was 2"...yikes...divine intervention?) which slowed the game down considerably.  Plus Dave was completely new to AoF and this was my second or third game (if you count the 2 x bouts of Shiloh we played last year).  If I had a "beef" about anything (besides my own fumbling of command and getting Sam Grant captured!!!) it would be the length of time it takes to play.  "Grant"-ed [pun] Dave and I are newbs, we were fighting from 11am to 5pm and we still had 2 turns left to play through.  It's hard to find 4 hours to play sometimes, let alone 6 or 7 hours. That is not a ding against the game, just an observation of mine - you need time to play a bigger battle.
Bottom Line:
I think that AOF really captures the essence of command at the ACW / Army level and the combat is perfectly simple, and suited to big engagements, if you have the time, friends, and units painted.  This is one of the most era-evocative rules I've ever played.  I enjoyed the game very much and we will play more.
That concludes ACW month here at Sound Officers Call! I played numerous ACW battles (including Shiloh with the Neil Thomas ACW rules, and some not even blogged about like Blucher-ACW Variant)
March is "Seven Years War" month and the SYW painting has already begun!  Stay tuned and watch this space!
Posted by Disgruntled Fusilier at 11:40 AM 16 comments: