Wow painting these guys in their M81 woodland camo was a huge pain but I can't argue with the results.  The pictures don't do these guys justice but I have to admit, having a brush so obscenely small that you can't even purchase it in the "paintbrush" section at the art and craft store really helped.

I followed a tutorial found here.  While a 40k player, this guy paints his IG troops in all kinds of modern schemes, and he posts step by step guides!  Also, having Vallejo's Luftwaffe Green and Khaki helped as well.  And that obscenely small brush I forgot about...

This is probably the nicest camo I have ever painted, which isn't saying much but it's a marked improvement over previous attempts.  (okay, my 1/72 choco-chip desert was pretty good...)

Bases still need sand and paint and flock but I'll get around to that.

I guess I finally need to assemble those Bradleys huh?  That's OK I have a fleet of already painted M113s to use with them for the time being. 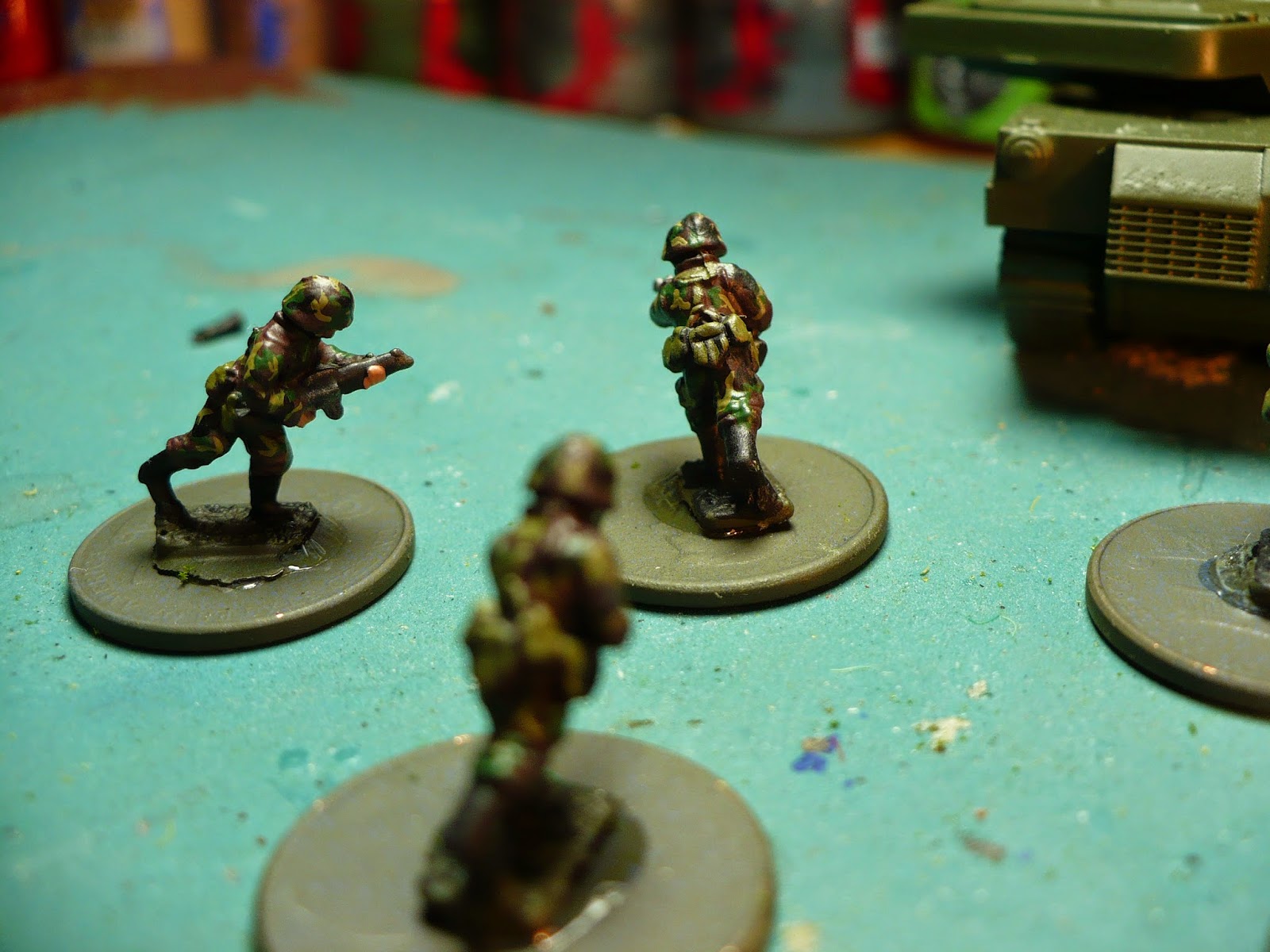 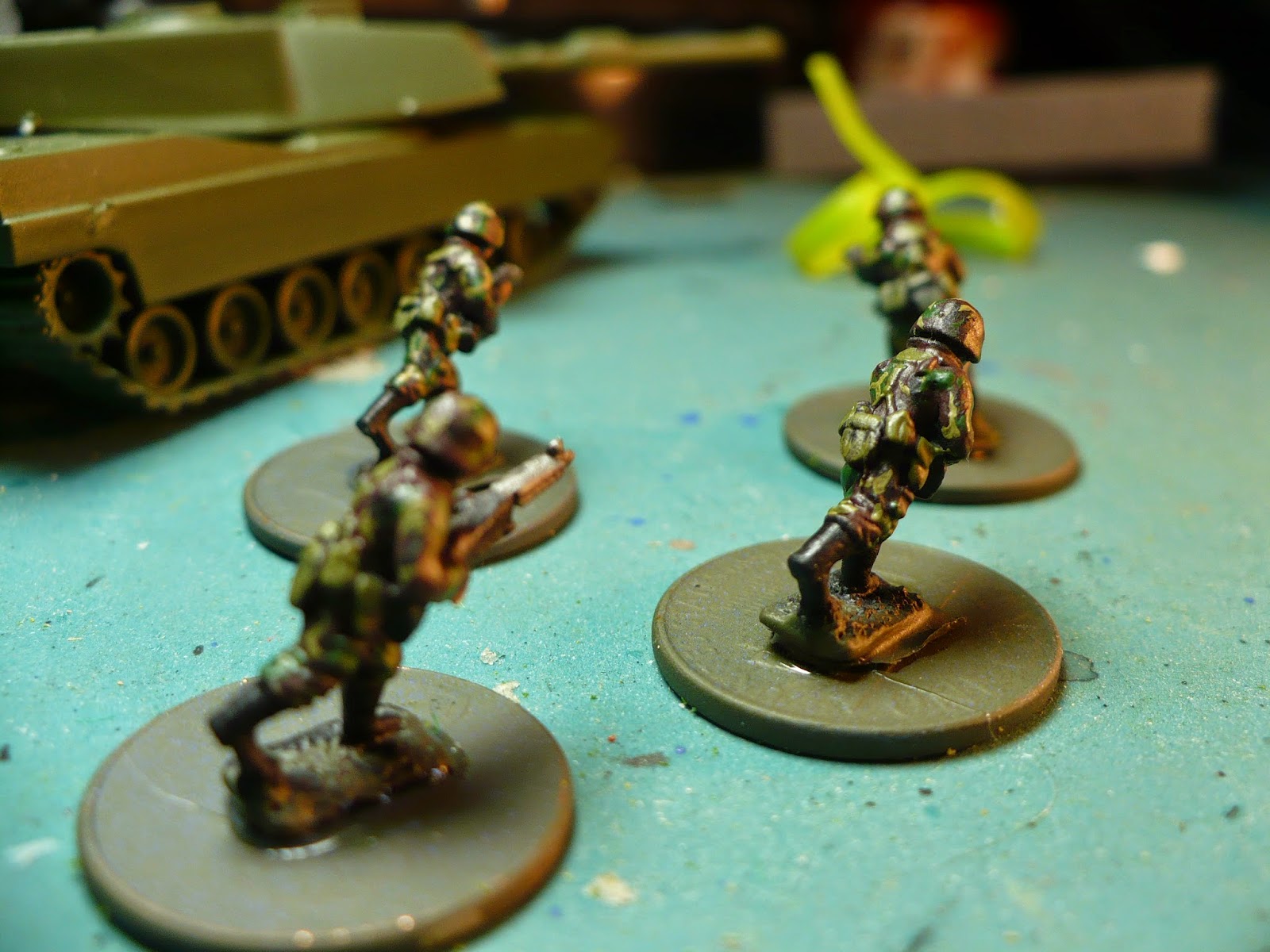 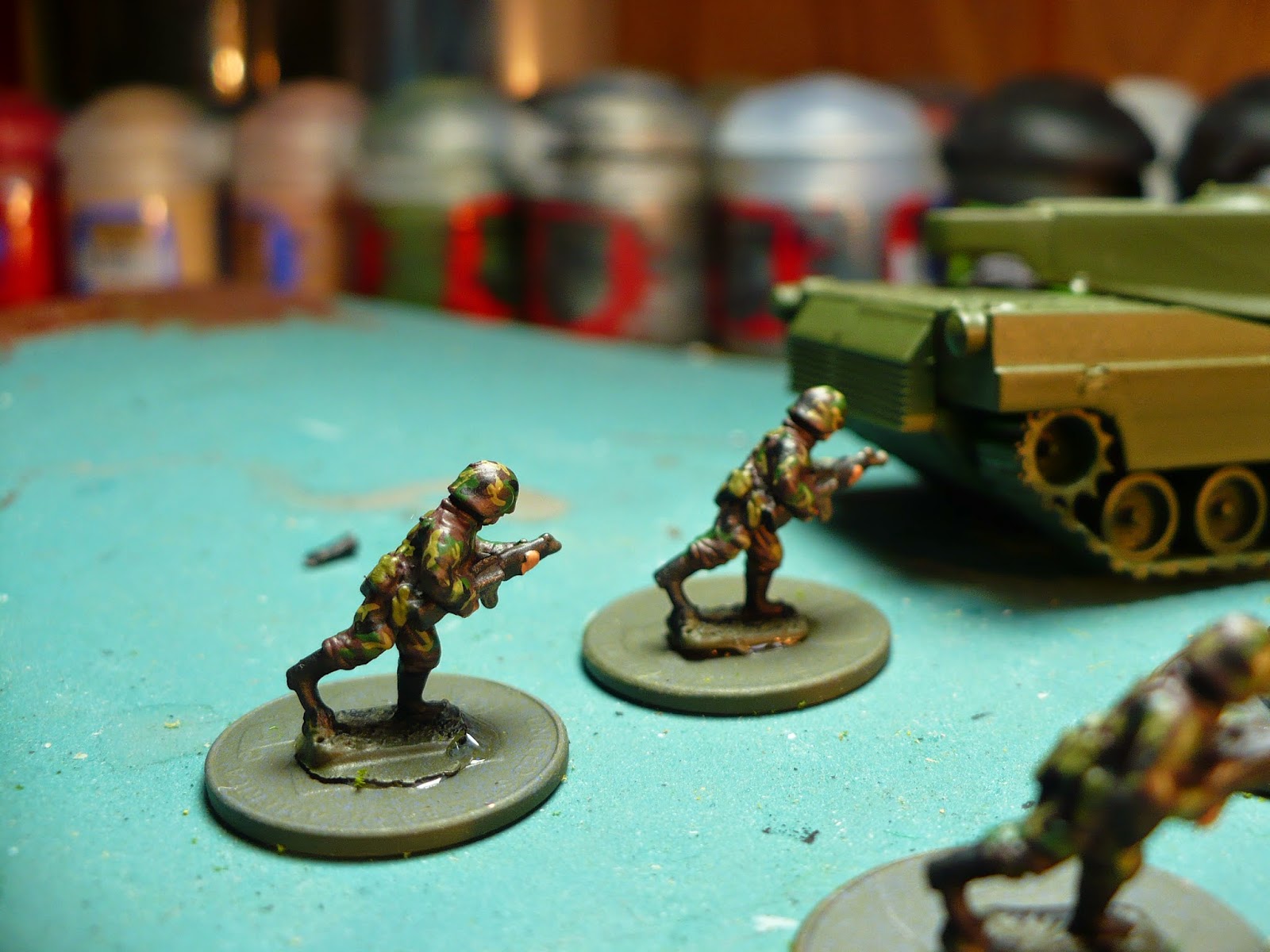 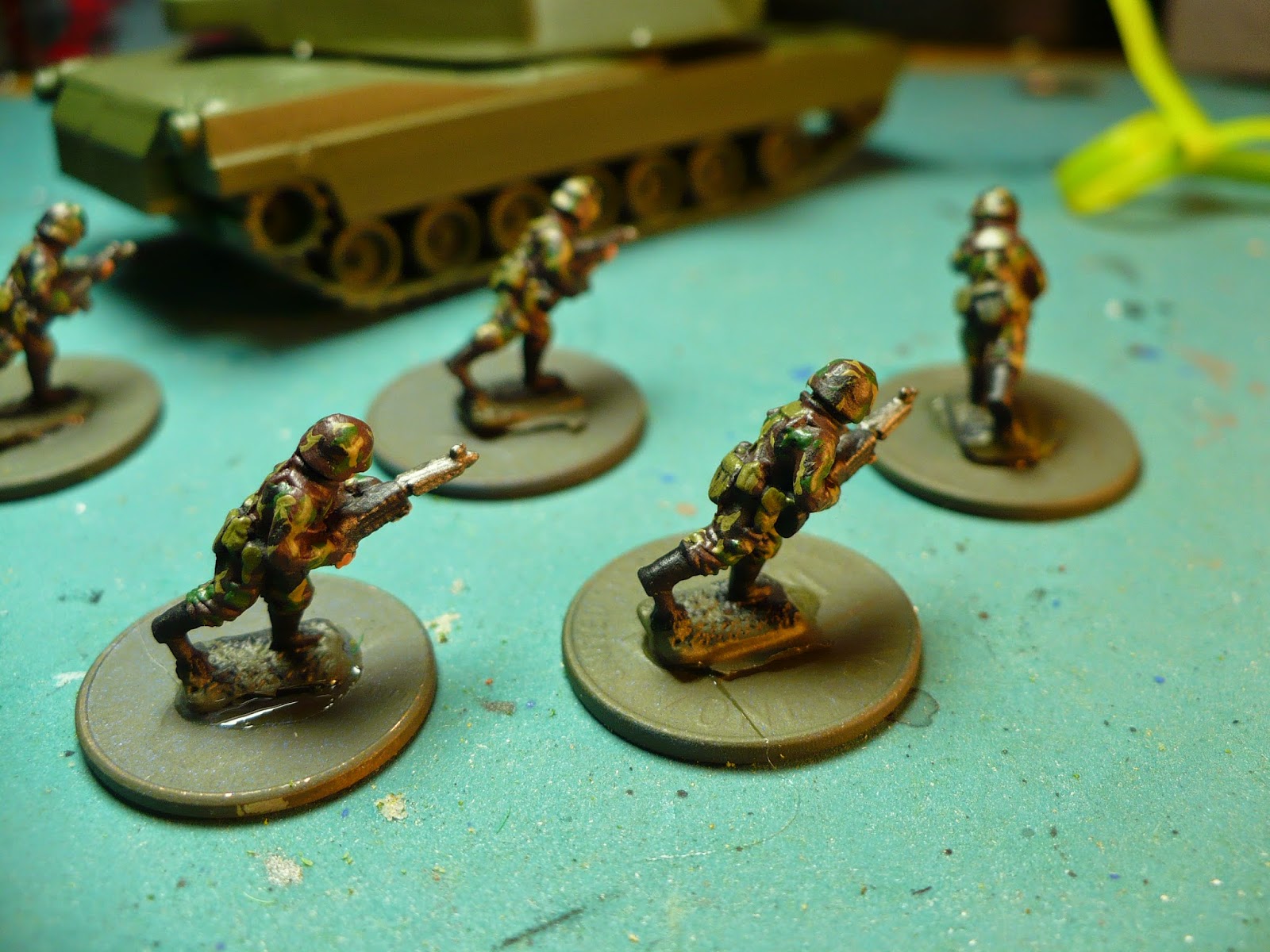 Lots of painting still to go.  I've finished my "Middle Eastern Regulars" and I'll complete their bases and take pictures tomorrow before work.  Have another stand of French Napoleonic troops waiting (decided to knock out a base at a time for Naps and SYW - makes it much easier to do.)

3 more squads of Canadians are primed and have their helmets painted.  I will knock out a squad of them tomorrow.

2 more squads of US GI's in ACU camouflage need to be redone and based.

A few games in the work as I test out the "single based" concept.  First a skirmish game in 15mm (probably FUBAR) followed by a squad or platoon based game where I'll stick the same single-based 15mm troops on sabots and see how they do.

After the last batch of modern US guys I painted, I was a little disappointed with how dark they turned out so I did a little research and I tried a few different techniques.

Bear in mind, I'm not one of those guys who are good at sharp detail on 15mm figures so this is the "time-starved" solution to an age old problem - digital camouflage on tiny figures.

I think they look much better than the first batch this time around and I'll talk about some of the things I did differently. 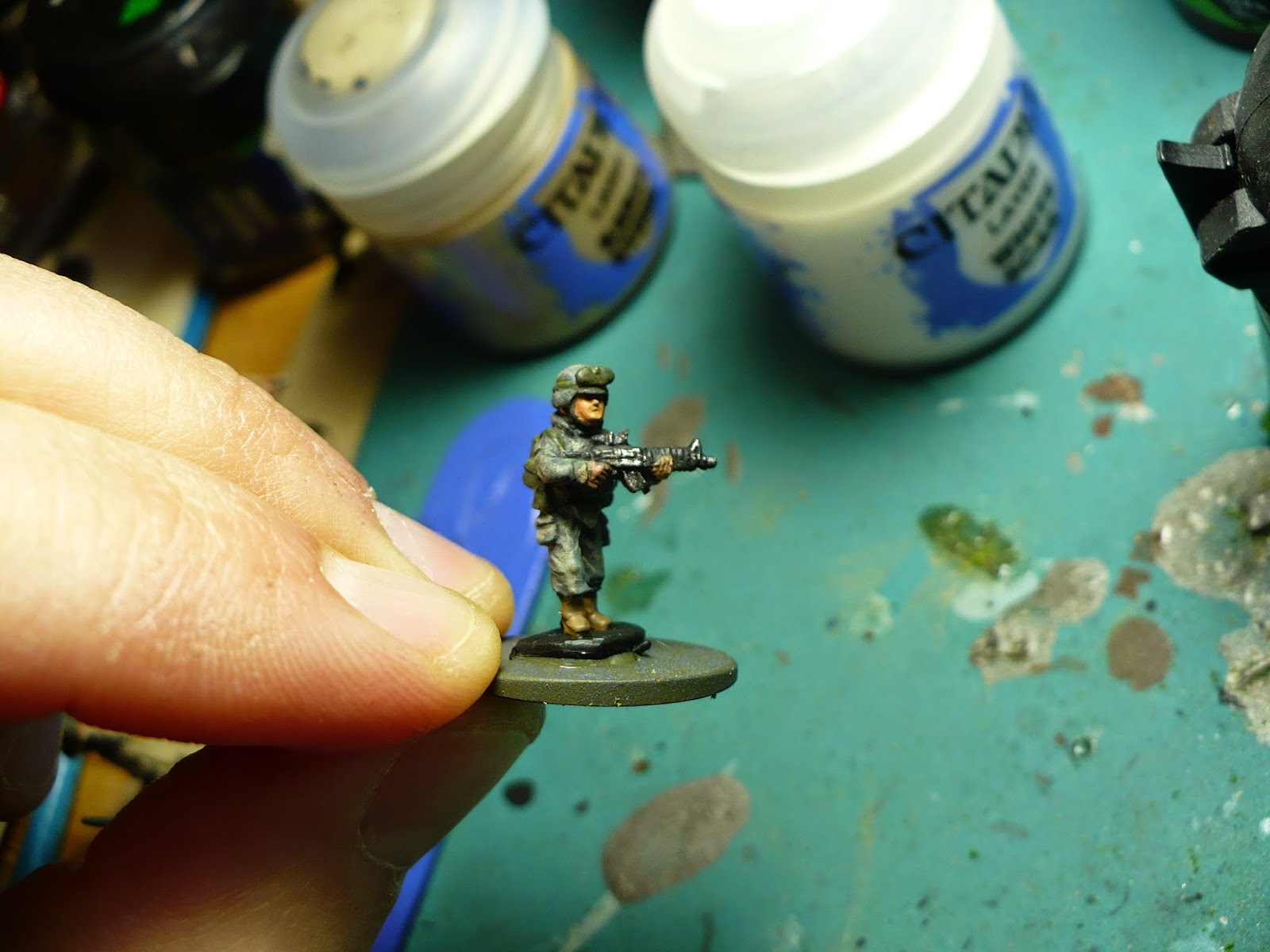 First of all, digital camouflage is tough even on bigger figures and there are many excellent methods out there where painters who are much more talented try and talk you through it.  My goal, as always, is to get a respectable army on the table in a reasonable amount of time.  For someone who wore this exact uniform for quite a few years, I can say that at a distance, the tan against the greenish-gray-sage look like tan splotches.  So that's what you have here. 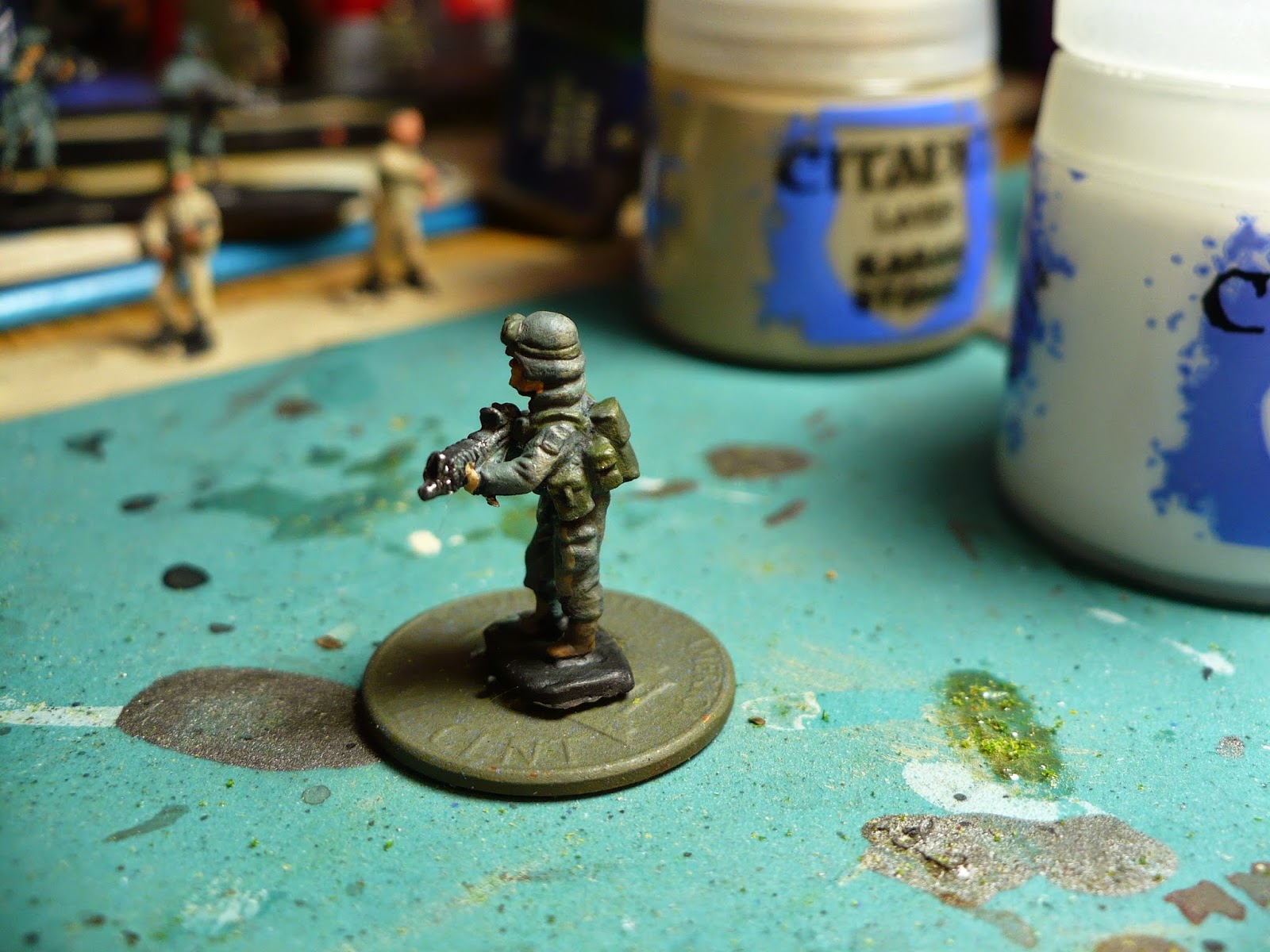 This time around, I dulled down the sage green by adding a generous amount of gray to it.  Same with the tan.  It is dulled down to be more subtle.  The point is tricking your eyes right?  Also the black ink wash I gave them was actually covering up the camo so I dulled the wash down significantly.  Probably 3:1 water with some grey thrown in for good measure. 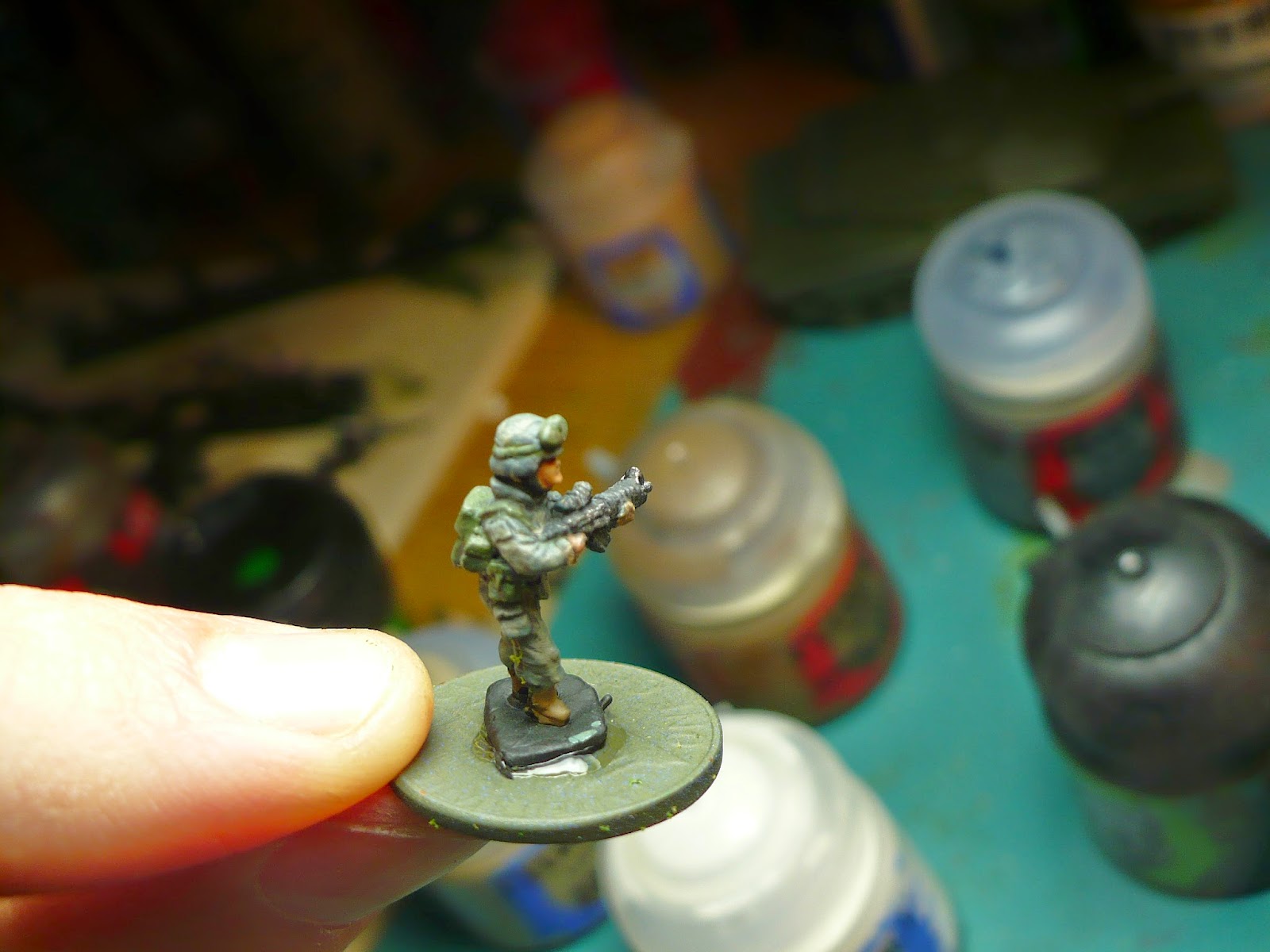 The tan should be visible on the figure, but not prominent where it looks just like a blob.  The problem I always run into applying camo to small figures is my camo looks too blobby.  You want splotches, not blobs.  Does that make any sense? 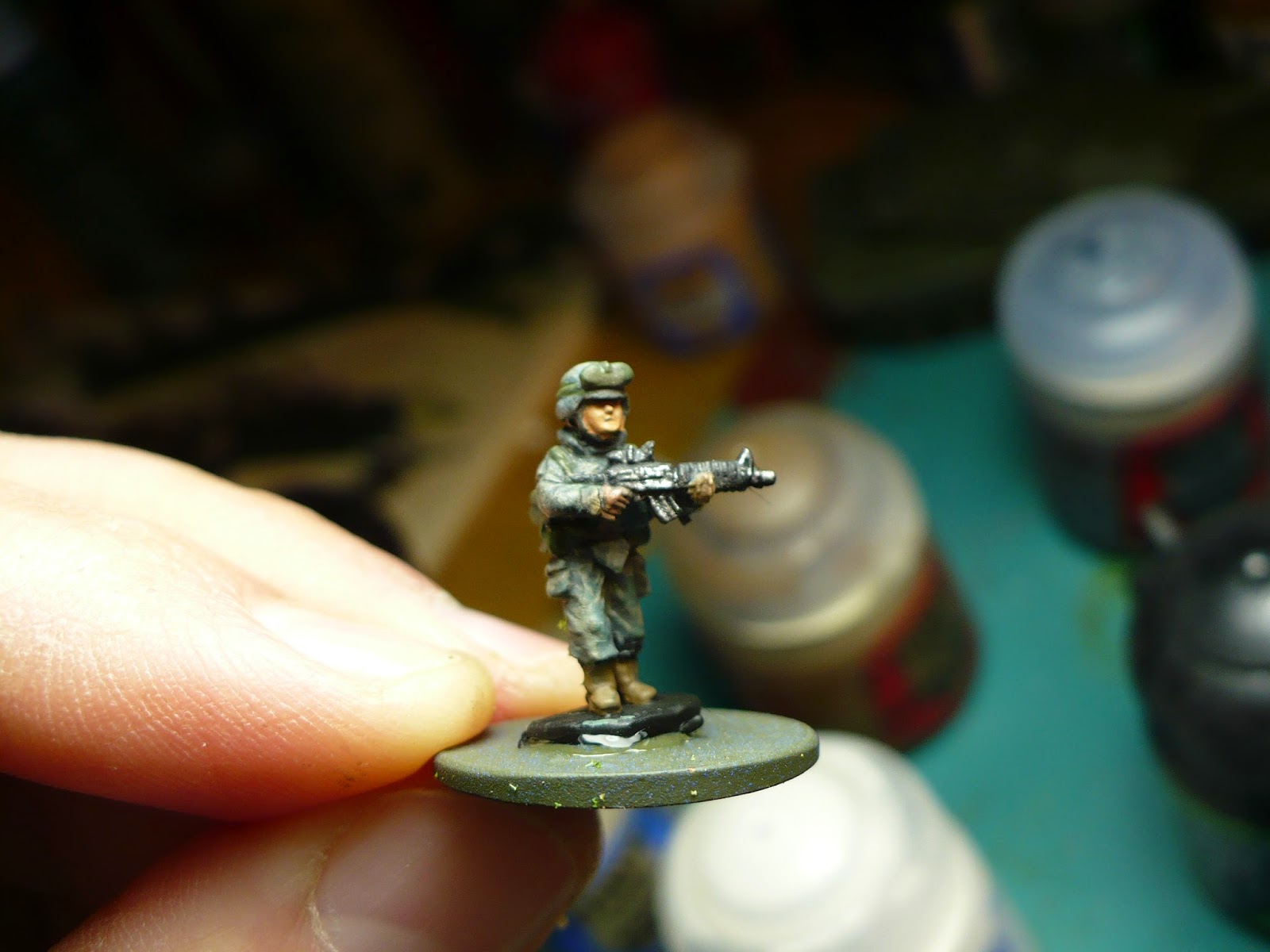 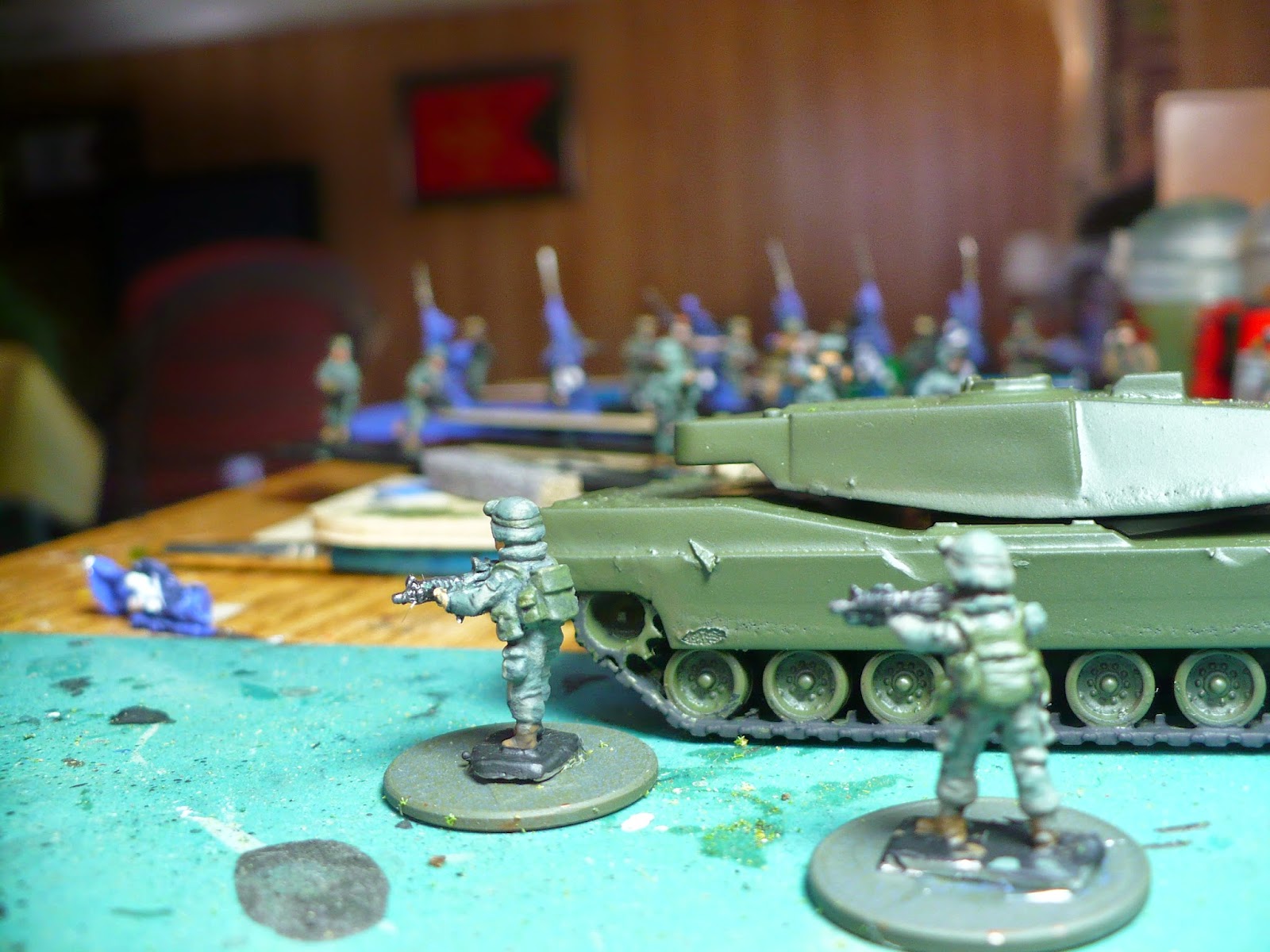 The G.I. who is firing was basecoated with tan first and then had the greenish-gray blobs applied to him after. Not much of a noticeable difference, and that's a good thing!  Also no dry brushing on any of them as I wanted the tan to be visible. 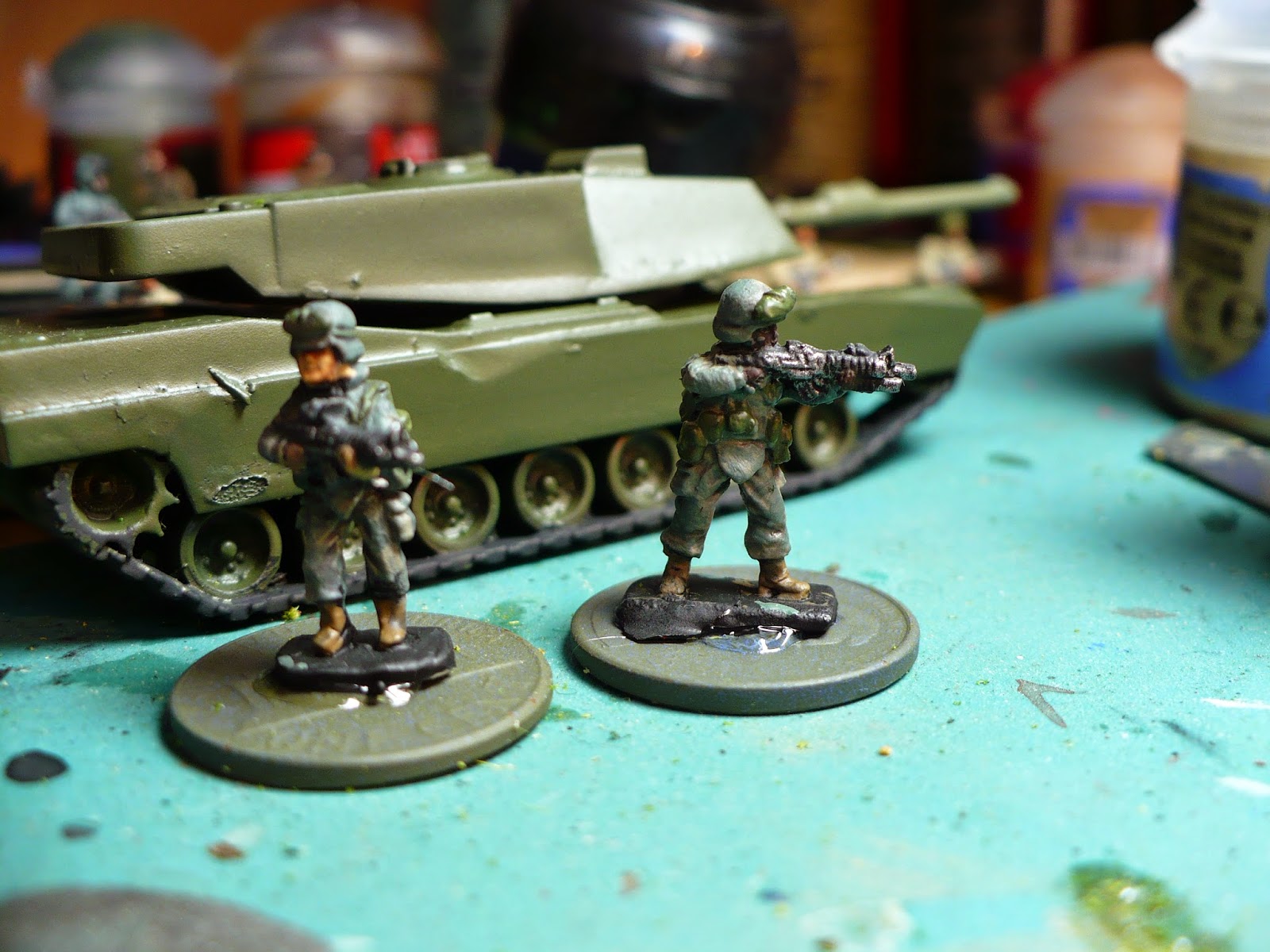 I painted the kit green again just to make it stand out.  One problem I ran into is that I mixed up the order and washed the figure before I painted the kit.  The green kit would look better with that same wash on it.  Next time!  There are plenty of figures standing by to practice on. 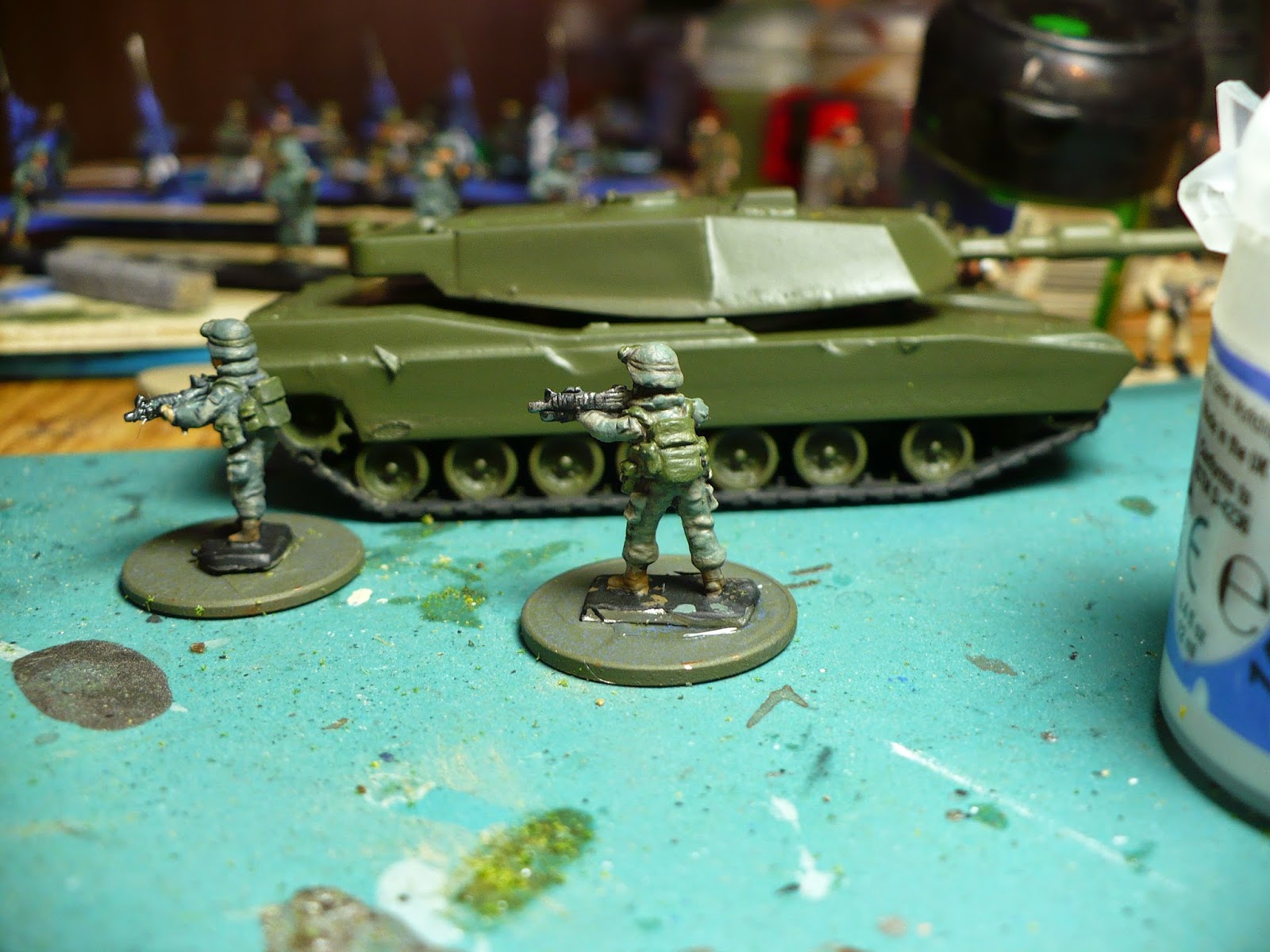 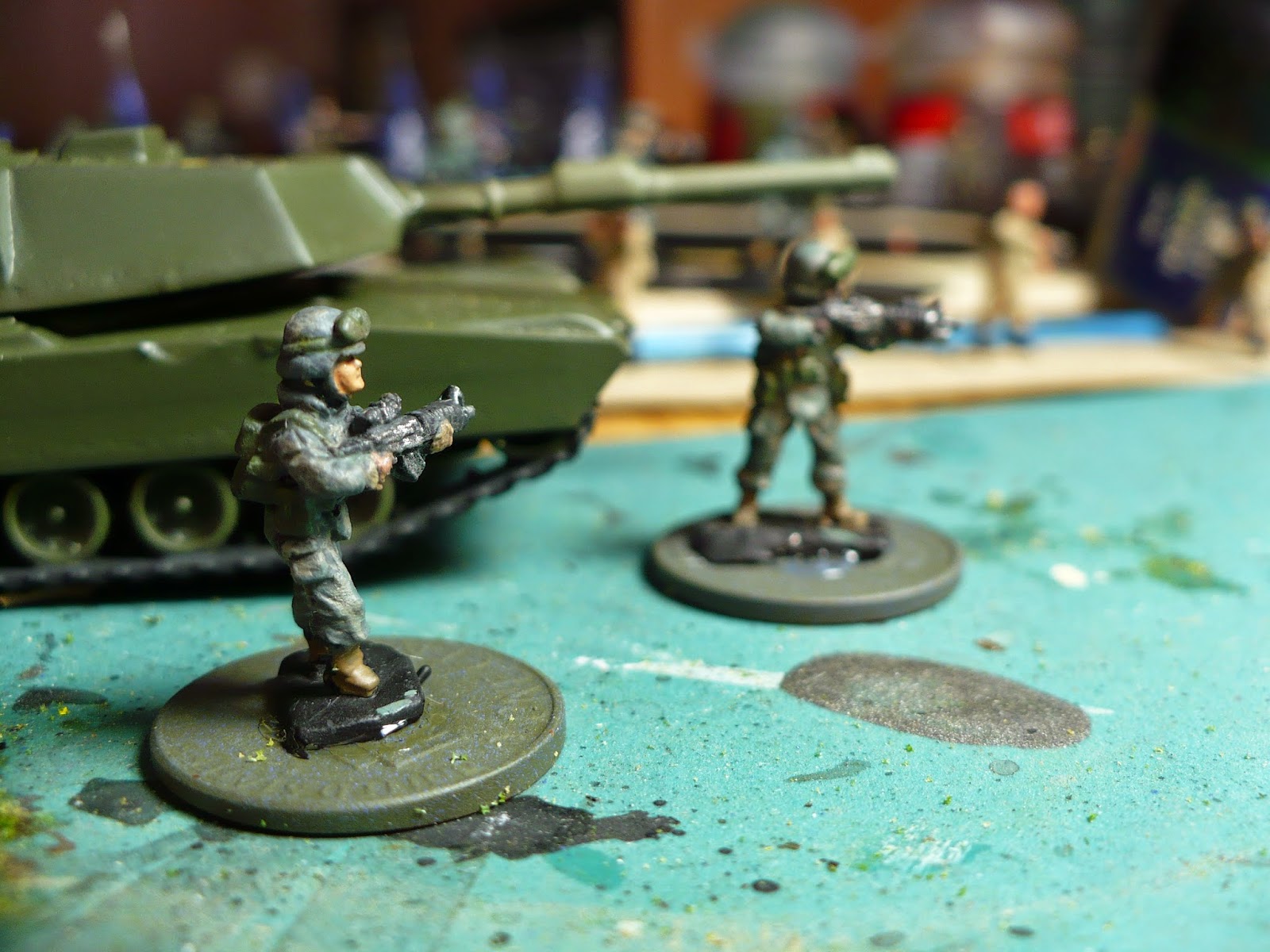 Slow gaming as of late - too much stuff going on here with the weather improving.  I did have some time to paint up a squad of battle-hardened US troopers - as Dave used to say - "fresh volunteers for the war on terror!"  None of the bases are flocked or textured yet.

These guys are the start of my modern/ultra-modern Skirmish collection and I will most likely play FUBAR among other games with them.

I really like the Rebel minis troopers!  I also have PRC troops (by accident, believe it or not), Russian Spetnaz, and  Fedayeen and Insurgent troops (who I will paint up as the 'daesh' right after I buy the new Khurasan Kurdish PKK forces!!!)

Painting the ACU was a pain and unfortunately you can't see the fine detail in most of the pictures.  I used a piece of spongy foam to make the tan/gray pixels on the US camouflage.  The black ink gives them a very dirty, weathered look which I like anyways.  Some were dry-brushed with buff afterwards.  Some were not.  Still have 2 squads and the command group to finish. 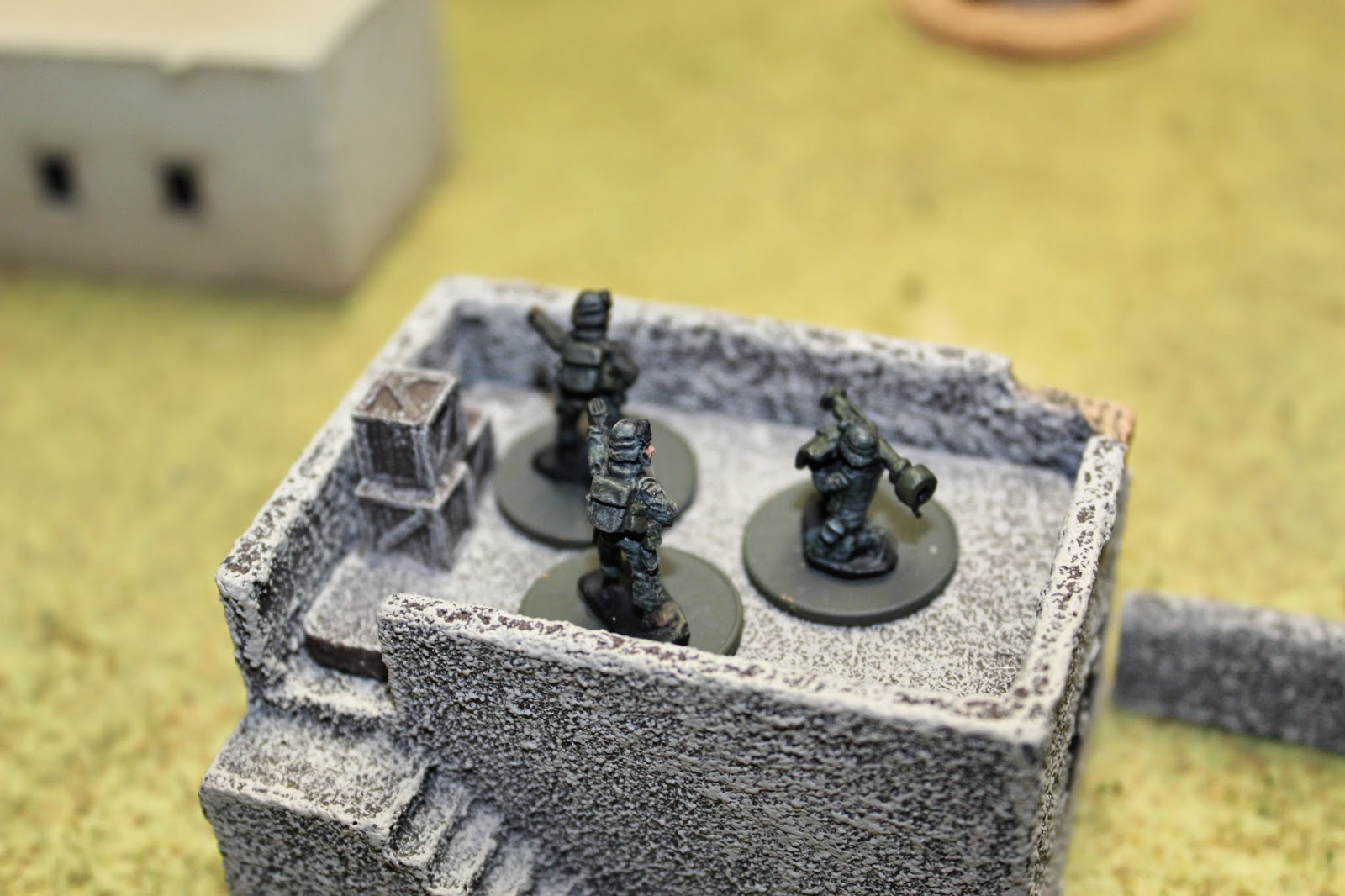 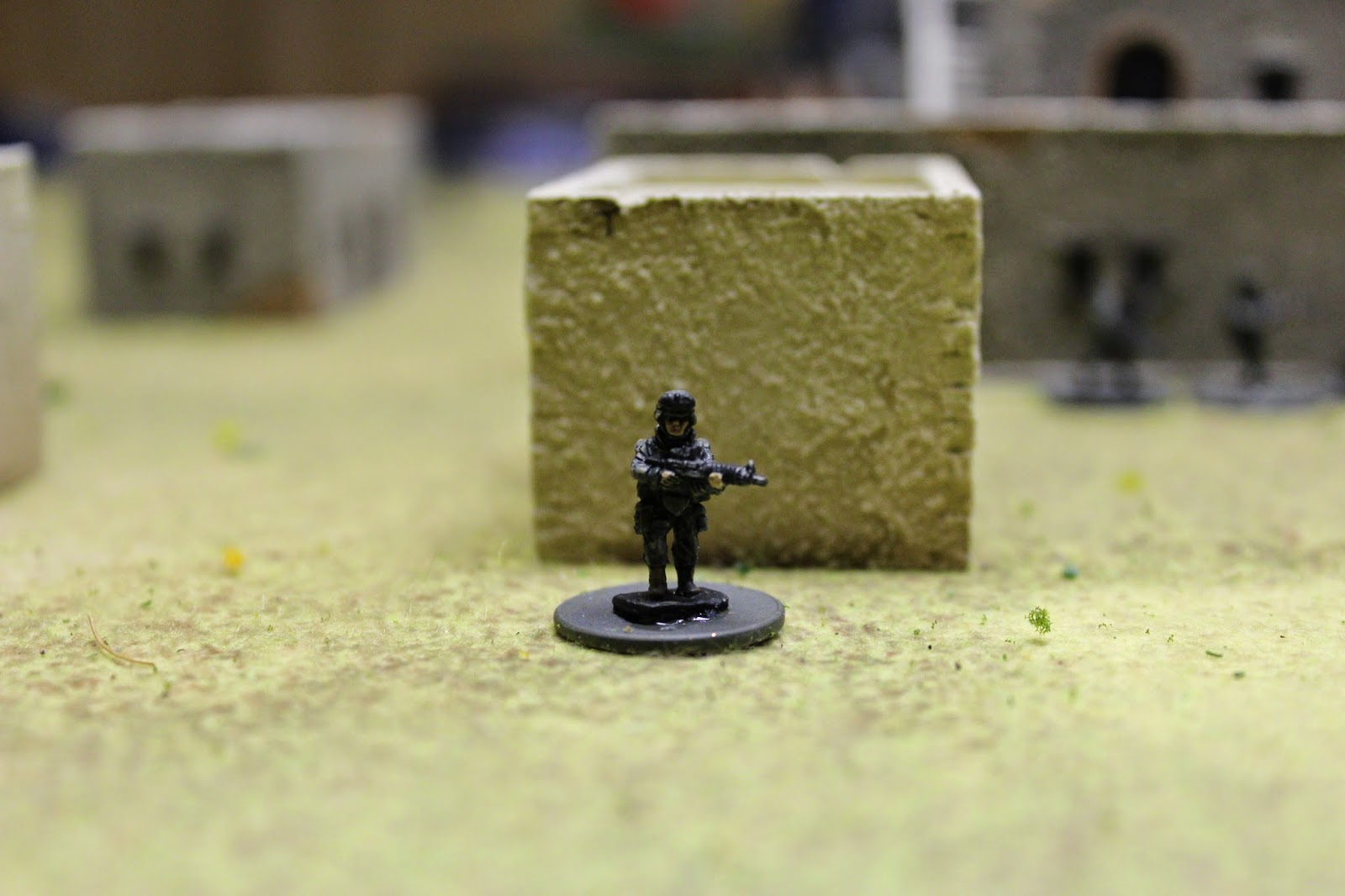 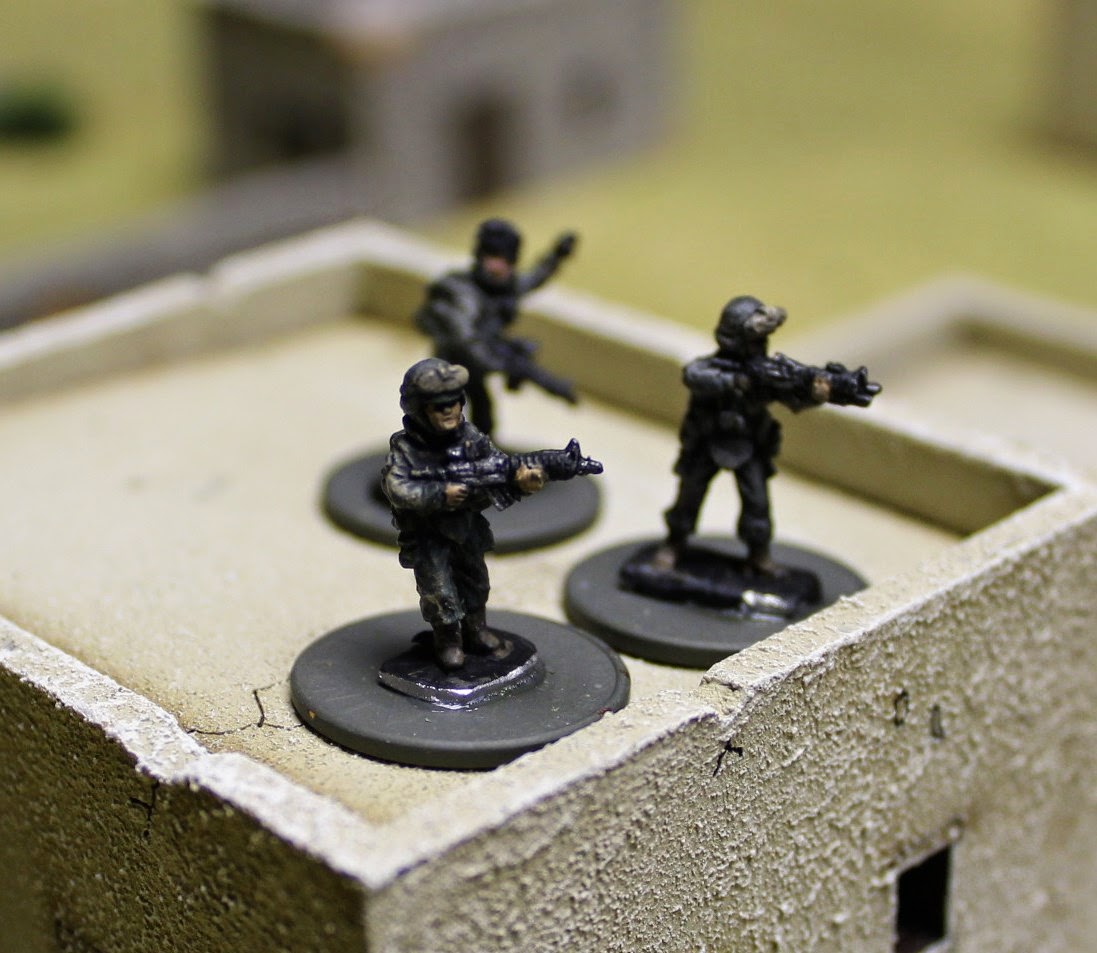 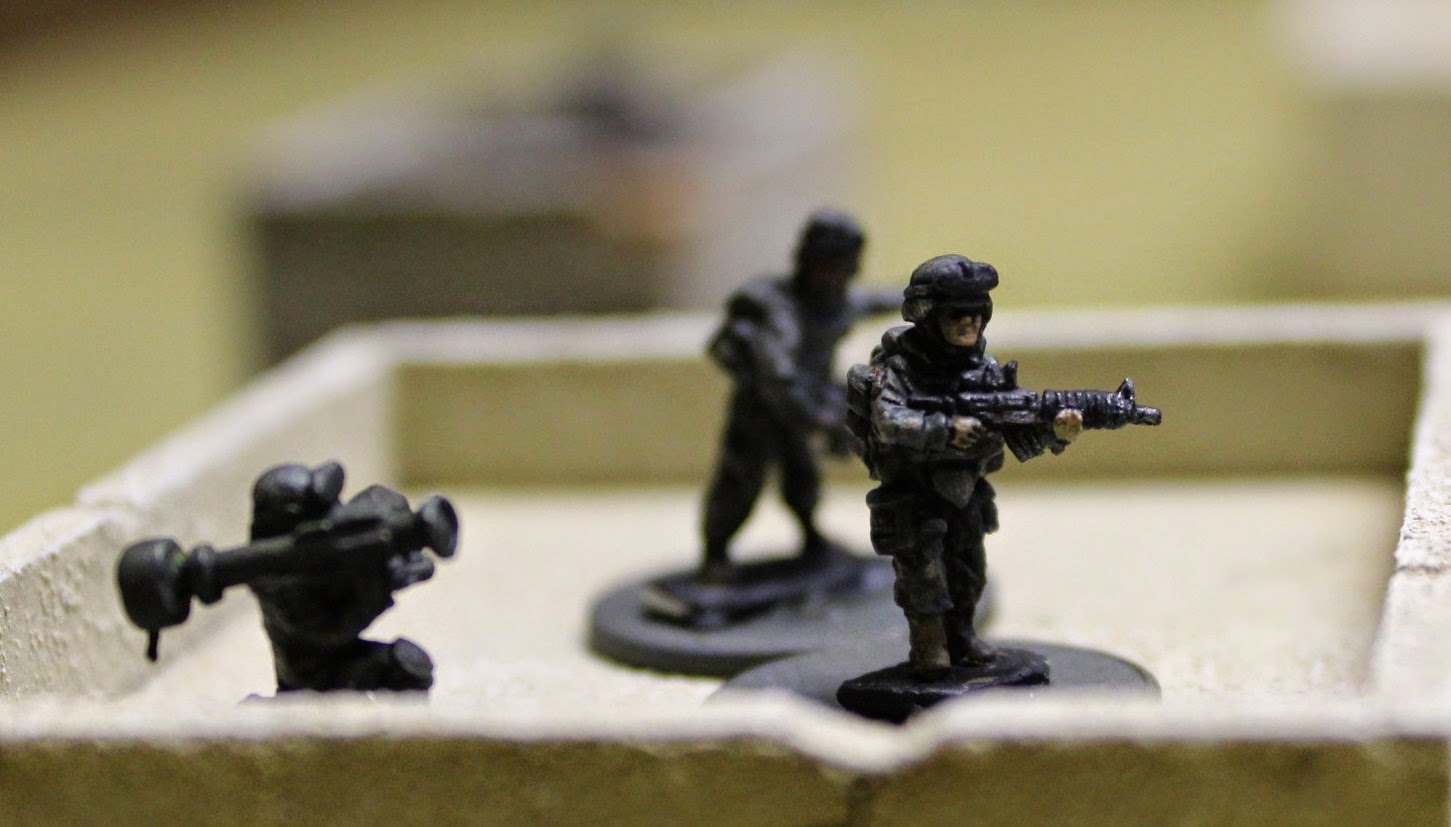 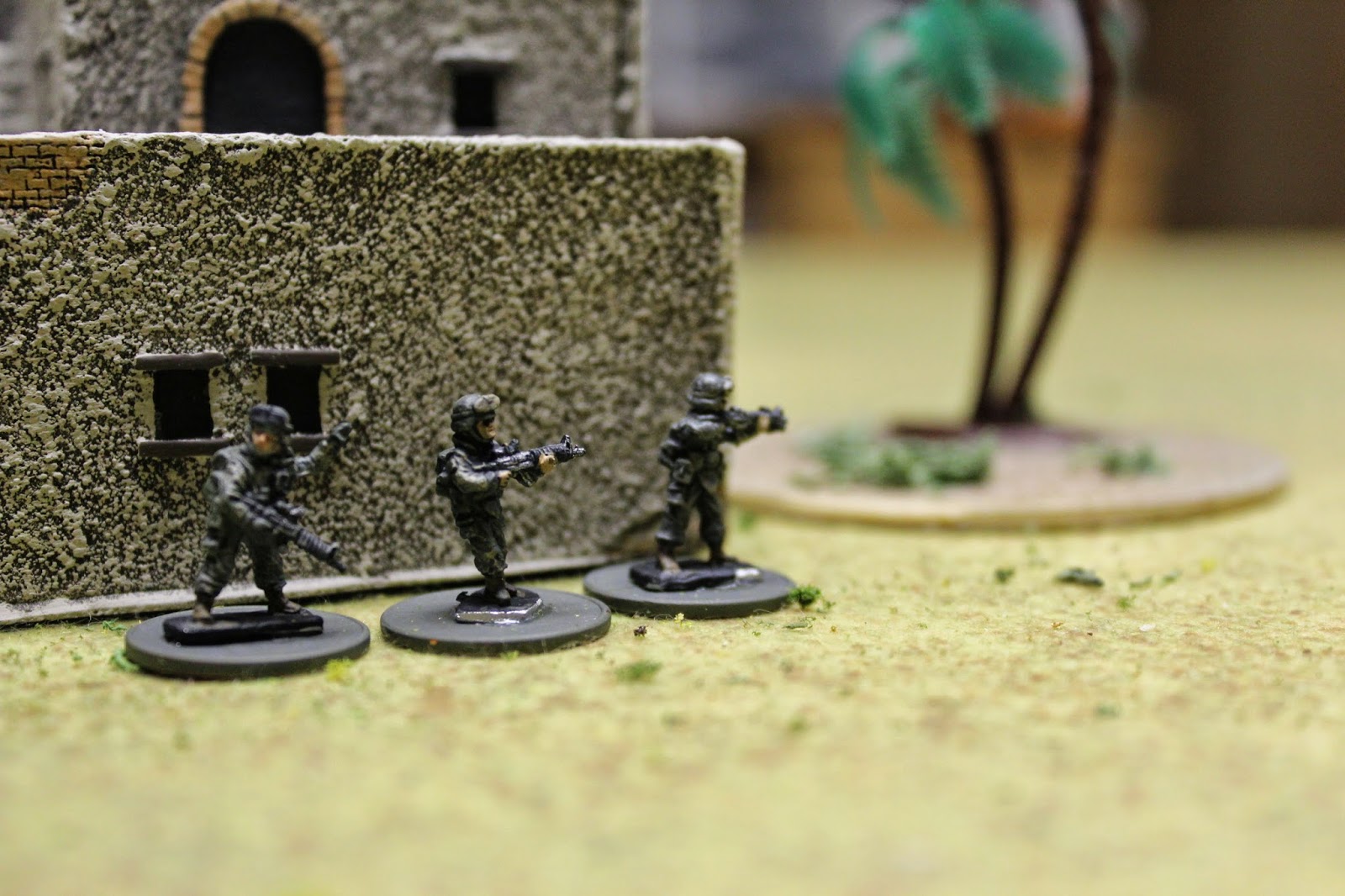 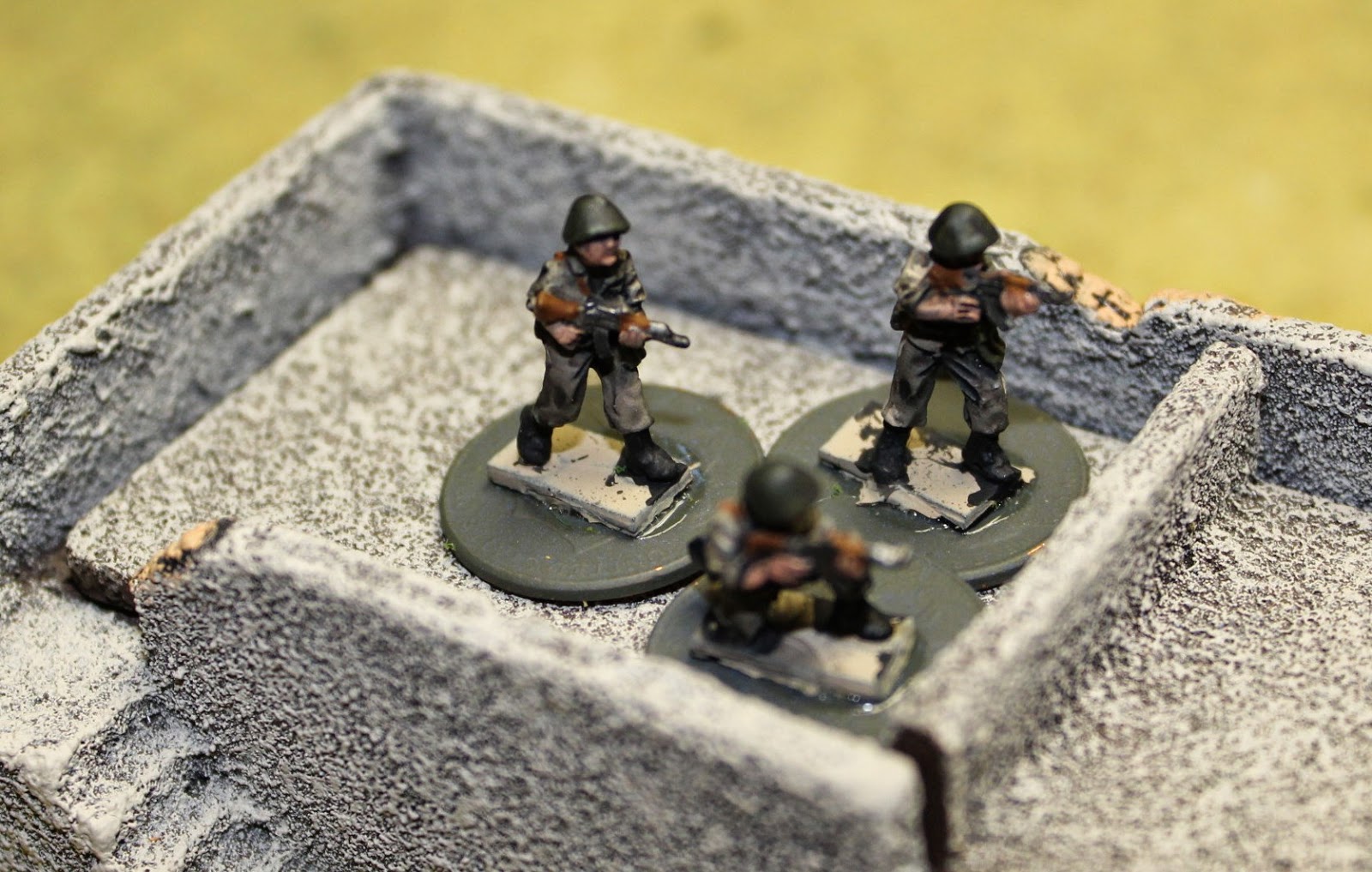 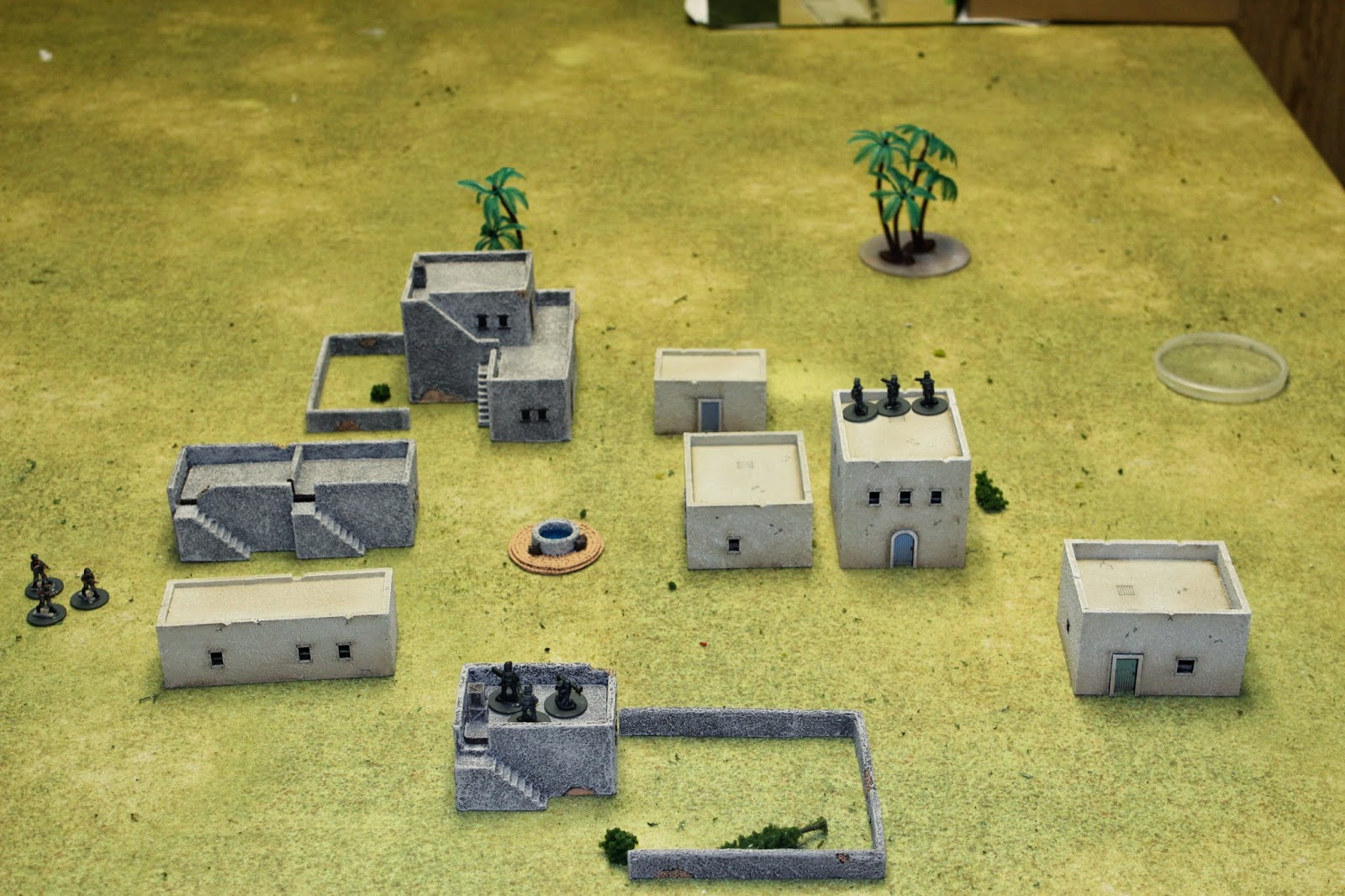 That's all for now.  Napoleonic French Battalion in the works, followed by more Middle Eastern Regulars, Modern US Troopers, and Cold War US!  A most ambitious spring ahead of me!
Posted by Disgruntled Fusilier at 8:20 PM 2 comments:

"Comrade General, Major Davidov's force has withdrawn from Laubach.  Planners are already sending out taskers to the battalions for tank and motor rifle platoons to assemble a new advanced column.  They won't be happy about it."

The commanding general's expression never changed once as he pondered the map. "Let them gripe, Fyodor. More grist for the mill to grind.  And of what Laubach?  Is this going to be a problem?"

"No sir.  A minor inconvenience.  We can forget the Laubach operation.  We will be having lunch in Kassel tomorrow."

From where we left off, Soviet troops were continuing a push against Laubach in a gamble to capture the small village and river crossing that would have enabled better lines of communication for advancing Soviets into West Germany.
A change of strategy led the Soviet commander to dismount his infantry and push them towards the bridge.  Losing 2 T-72 tanks in quick succession will do that!  This post takes up where the last left off - Soviet forces were successful in pushing as far as the crossing.  The final T-72 left the cornfield and successfully dispatched the West German Jaguar that was hiding there. 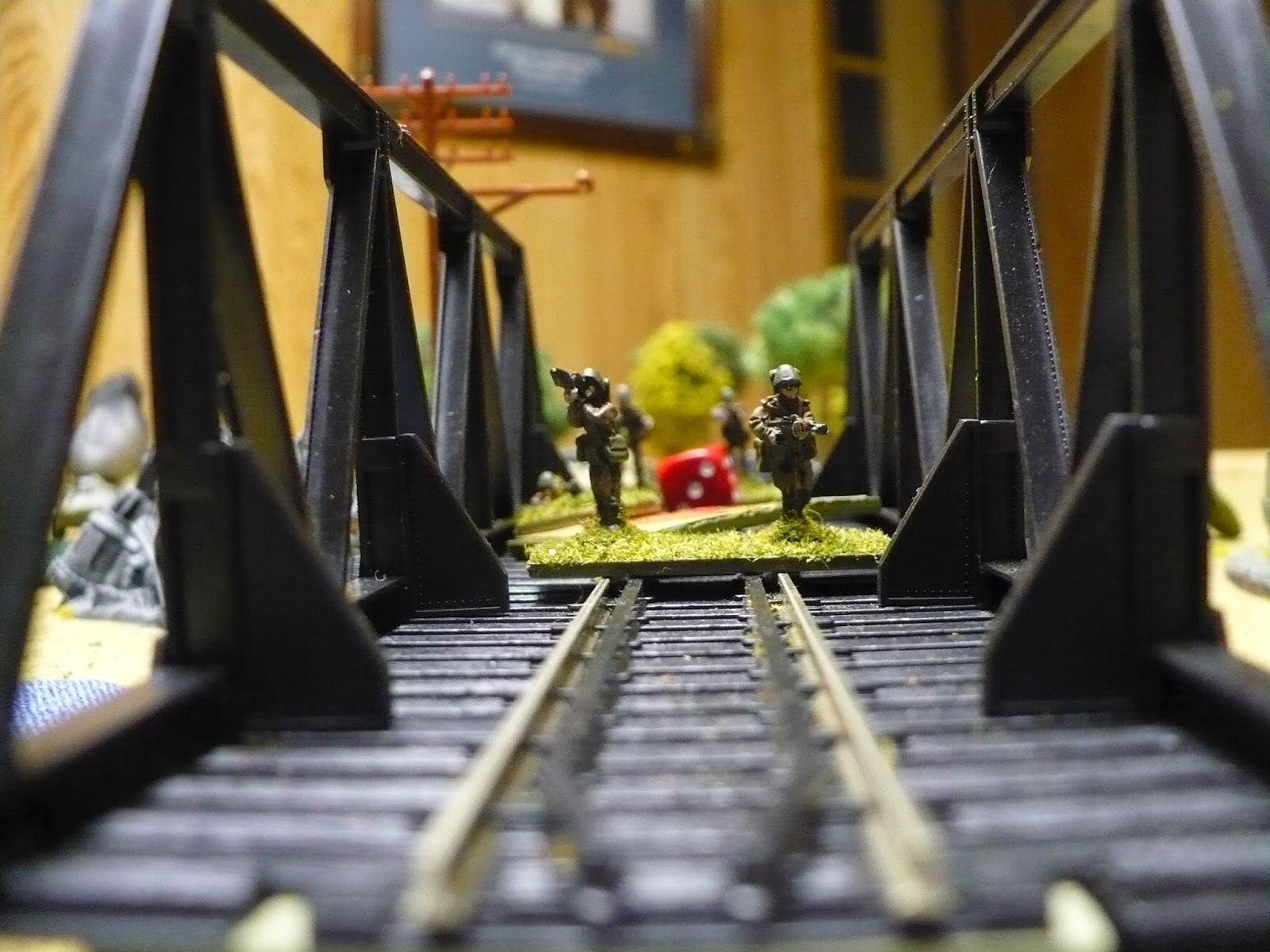 The German platoon commander realizes the main threat and pushes a squad from the west of the town up to the bridge.  Top speed!

The West German counter-attack leaves the Russians with only 1 infantry squad left, but they'll have to cross a killing field to get to another BTR!  Instead they hunker down and trade fire with the opposite bank.  The Soviet commander moves everything still able to roll up to the river to trade fire with the Germans.

The trail BTR on the bridge is requesting permission to back off - permission is not forthcoming...


It's worth mentioning at this point that the individually-based 15mm West Germans were very easy to maneuver and were able to fit into spaces that I had a hard time getting the Soviet troops to fit in.  I'm thinking all of my moderns will get the individual base treatment?  Maybe even World War 2 troopers?  Would bode well for skirmish gaming!  Sound off in the comments section and let me know your thoughts. 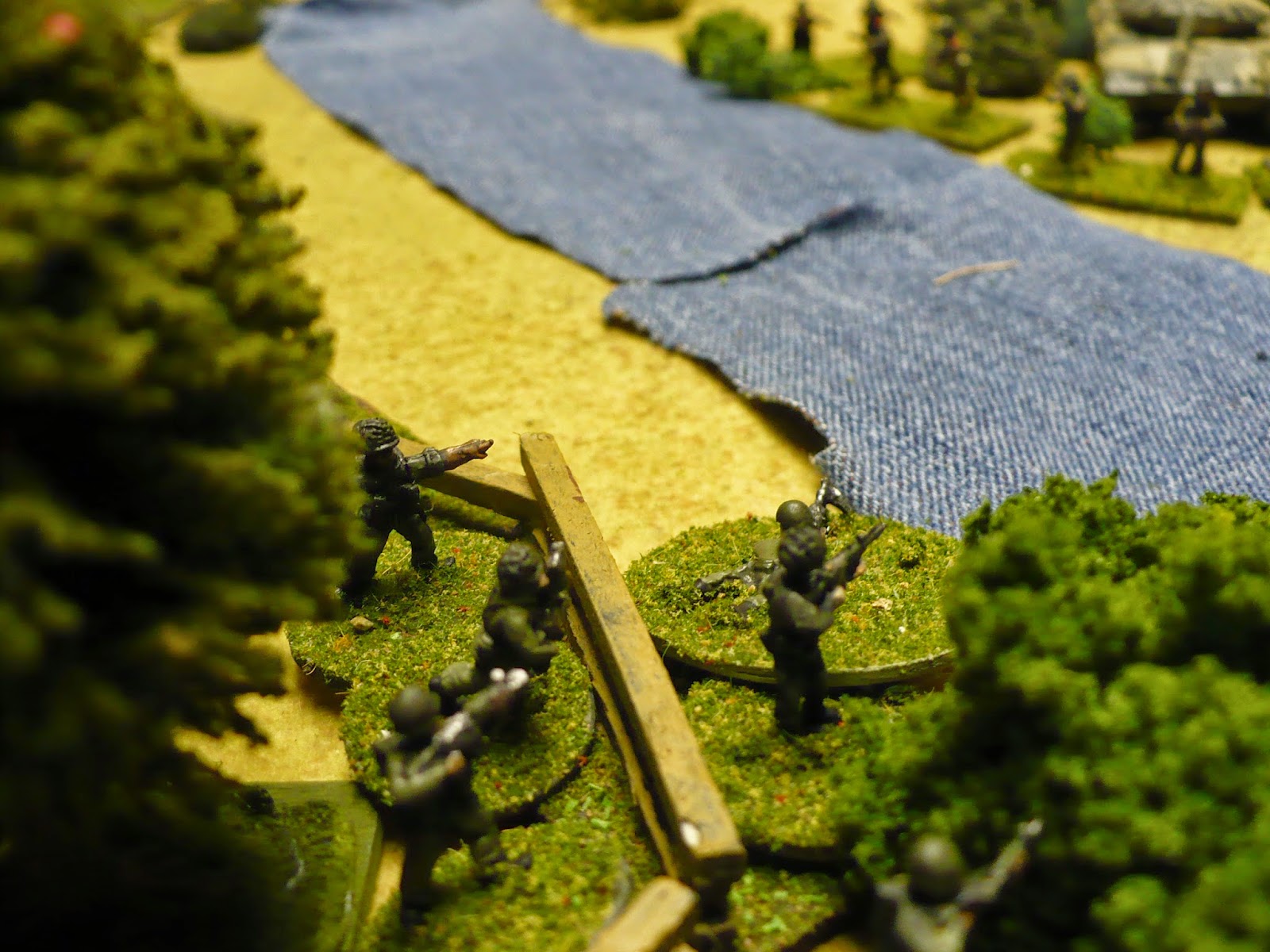 While still a good way from their breakpoint, the Soviet commander has lost all of his infantry dismounts.

It was good to have a Battlegroup refresher and I learned quite a few things about what I did NOT know prior to playing this game.  Let's review:

Still need to do more weapons research. The Germans had a Panzerfaust which I modeled in the squads but did not really understand.  What should the HE/AP values of this weapon be?   Those are details you have to iron out before starting the game as your troops hate when you have to leave the battle to go look something up...

Dismounts. When you dismount - does the APC become a separate entity?  Entitled to its own orders?  I played it like that but in the defense when the M113s are backing up a squad, that huge .50 caliber MG really helps and adds to the firepower value of the squad.  Probably a good thing to iron out.

The World War 3 Battlefield is a dangerous place.  Just like the WW2 battlefield 50 years earlier, the WW3 battlefield has lots of ways to kill infantry squads.  Prior planning will help decide when you should re-mount your infantry to advance.  While the Sov's did capture that rubble pile early-on, what about a plan to rush the bridge?  The attack seemed to lose momentum when the infantry actually got on the bridge.

Basing.  Battlegroup's basing is very lenient I have to admit.  Still though, it was actually nice moving individual troops into position as they could maneuver into tight spaces that troops mounted 2 to a base could not fit in.  I'm still contemplating the wisdom of rebasing even more troops though.  Not sure if I'll rebase my WW2 guys.  That's alot of infantry to rebase!

Killing Infantry.  I found it easier to KO infantry when you can pin them first and force a morale check.  If you have the luxury of multiple units and orders to burn, try using an Open Fire order with area fire to pin an infantry squad in place.  Then use another infantry unit firing point-fire to kill.  You can force another morale check and if you're lucky, the unit will rout.  By the way, i treated assault rifles like SMGs in Battlegroup but extended the range - so your AR's firepower counted as "2" if the target was under 10 inches.  Deadly!
Posted by Disgruntled Fusilier at 11:31 AM 4 comments: