The Battle of the River Mius 1943 with Rommel

Ken and I played through a full game of Sam Mustafa's "Rommel" over the last 2 x weeks, making this a truly celebratory post as we successfully played through turns 1 through 8 last week and completed 9 through 16 this past weekend.  We played the "River Mius" scenario from the outstanding  Hexes and Miniatures website, which I will link to on the right side of my blog.  This post is part battle report, but mostly a collection of our thoughts on the game.

The Battle takes place in Ukraine, 1943 along the Mius River with the Soviets making post-Kursk drives attempting to take advantage of an off-balance German Army.  Both sides are well-equipped for this titanic showdown and we fielded the better part of 2 x Divisions on the table (Rommel is an operational-level game where stands are companies).  I felt that the OOB lended itself nicely for beginner play (and conveniently I had all of the elements in the OOB painted and ready to rock and roll).  The Germans must hang on to two of their objectives, and capture 2 x Soviet objectives.  The Soviets must hold 4 objectives, and 1 of those objectives must be a German one.  The stage is set!

I sent my units forward very aggressively along non-supporting axes to try and dislodge Soviet battalions (squares with 2 or 3 stands) from their objectives. I found out the hard way that armor should not fight in a city without support, nor should they try to move through forests without accompanying infantry.  Rommel has a really neat combat system that kind of works like a boardgame (the whole game really almost feels like a boardgame).  I have to say infantry really is the centerpiece of the game, as it probably was the war.  Your armor is always sexier, but your infantry have tremendous staying power and attacking power.

I have to admit that it's easy in a board wargame to overlook the infantry especially when you have armor and mech battalions, but in Rommel you cannot make that mistake.  You're forced to use combined arms attacks if you want to make any dents in enemy positions.  You'll also need to set up 3:1 odds to dislodge an enemy - something a textbook or field manual once told me when i was a cadet.

It's easy to be surprised in Rommel at just how good your German armor is, until you end up losing it all if you're not smart about conserving it!  German armor units are incredibly powerful but you'll never have enough of them.  Ken played very smartly with his armor and was able to commit his armor where he could make a breakthrough, which I'd argue he almost did in the center but we reached the end of the game. In this manner, the game forces you to have a plan and to think.  I'm quite sure I've never played a wargame quite like it and I am looking forward to playing again, albeit in 6mm. 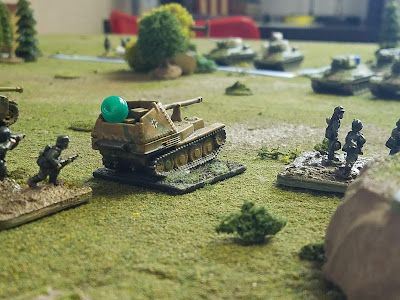 One of the really neat things about Rommel though, besides the combat and the scale, is the ability to "buy" tactical options and events.  This, we felt, really imparted nice WWII detail to the game and added to the narrative.  For example, when assaulting in the city, I purchased, for 1 Operations Point, "flamethrowers" which allowed me a +1 column shift when assaulting in an urban environment.  It's things that like that make the game even more fun and add an element of tension/gambling as you don't know if your opponent will spend an op to purchase a defensive tactic.

As the action unfolded, I found myself struggling to capture objectives that were seized by Ken's Soviet infantry - 2 x companies or stands worth of troops holding against 3 stands attacking with modest artillery support.  As I learned throughout the game, if you want to breakthrough and capture an objective, you have to be willing to "pay" for it in terms of spending Operations points to buy subsequent tactical phases and throwing in fresh troops to set up multiple attacks against the objective.  Literally needing almost 3:1  advantage to cause the kinds of hits you need to destroy enemy units, otherwise you'll find yourself in a grinding battle of attrition that a professional army most dreads (and one that the Germans are not suited to winning).

Ken focused his efforts on capturing 2 German objectives - on my left and in my center and his generous use of artillery and fresh reserves earned him a hard-won victory.  As fpr me, I learned what it takes to fight and win as a WWII general on a WWII battlefield.  Rommel gets you that close and puts you in the command post of the Army headquarters, making decisions about where to attack, how to attack, and what your fireplan is to support your attacks.  I cannot say better things about this game!

Anyone who reads my posts knows how much I like the narrative or storyline created by a wargame.  Wargames that have clever mechanisms and features easily create that narrative and I think that's something I appreciated so much about Rommel, that and it caters to my megalomania of being able to put an entire battle on a 6 x 4 table!  Just needs 6mm forces or 10mm forces as I think it would look much better.  Both Ken and I really liked and appreciated the game which I think delivers on its goals and promises.  If you enjoy WWII history, you should purchase or borrow this game, read it and play it - you owe it to yourself!

Posted by Disgruntled Fusilier at 3:49 PM