Okay, okay, my "hiatus" from World War II took a brief hiatus of its own last night, but don't think for a second that Talavera isn't happening!  Dave came over for our traditional Friday Night Fight for a quick game of Battlegroup: Overlord.

We played a roughly 450 point game with a veteran 12th SS Platoon and a handful of Panthers against a Canadian infantry platoon with a troop of Shermans, Achilles, and a 6 Lb'er in support.  This was an unusual and hard-fought battle fought in Normandy.

The Canadians start with their Achilles section snooping around the German lines, probing for seams in between units.  Intel reports there is a detachment from the 12th SS holding the crossroads near Bretteville and command wants it!  The nearby units, an infantry company from the North Nova Scotia Highlanders, and armor from the Sherbrooke Fusiliers are enroute!

Meanwhile the rumors of a German detachment are likely overstated.  The remnants of a security patrol near Putot have retreated towards the crossroads and are collecting themselves when they hear the clank of tank tracks!  The Tommies are here!

The SS "lads" scramble for cover.  The church becomes the command post for the platoon commander, Untersturmfuhrer Wilke, who uses the abbey for observation.  The rest of his platoon is double-timing to the church at this very moment.  Through the field glasses, Wilke spies blobs of infantry down the road fanning out towards the village.  There is no time for delay.  He will set up a battalion observation post at once, and bar the Canadians from reaching his position! 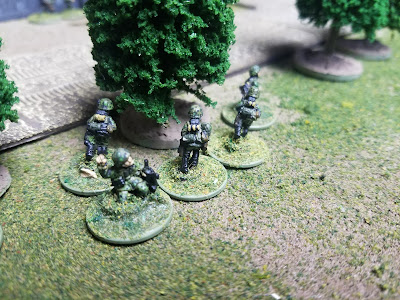 No reinforcements can be seen to the east.  So Untersturmfuhrer Wilke is on his own for now.  "MEN!" he yells "TAKE POSITION IN THE TREELINE AND FAN OUT!  Cover the approaches with your machine guns!"  The SS schutzen fan out along the roadway in a drainage culvert and immediately make their way towards a large farmhouse.  The Canadian armor is fanning out into the farmfields and coming fast!  The men check their Panzerfausts and open the sight apertures.  One of the scharfuhrers on the road yells "PANZER ALARM!"

Wilke hears tank tracks and the rumble of a Maybach engine!  A Panther approaches!  Their salvation!
The lone Panther is all that Regiment can spare at the moment but it's a huge boon to the youngsters fanned out on the road.  To the Panther crew, the thought that one of the beastly 17 lb-armed Achilles was out there was not comforting, even in a Panther.

The Panther begins a sneak and peek game with the Achilles, trading numerous shots but none of them ring home.  Dave maneuvers his other Achilles around the farm, hoping to get a flank shot against the big cat.  The Panther crew moves back behind the Church.  To the Shutzen who are watching the tanks go back and forth, it's not quite so comforting.  There will be infantry right behind those green monsters. 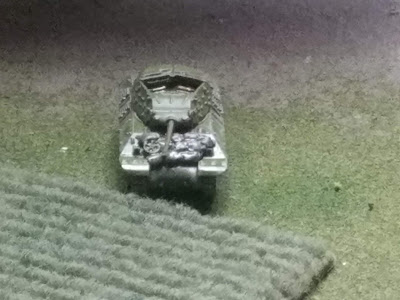 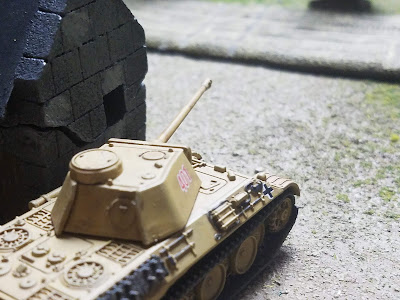 Reinforcements finally arrive and the next Panther, my "Panther Ace" shows up at the treeline.  Dave speeds his TD's down the road and a knife fight breaks out amongst all of the tanks at the clearing at close range!  I hit a TD and it brews up quick, (3+ on 2D6) and then Dave gets a shot off at Panther 401 and it is destroyed.


Dave's reinforcements start moving up the road towards the fighting.  Meanwhile my Schutzen are crossing the road, sprinting, to get into cover.  They use the burning Panther to move forward.  Dave seizes 2 objectives already but we're making him take the third as well (the church). 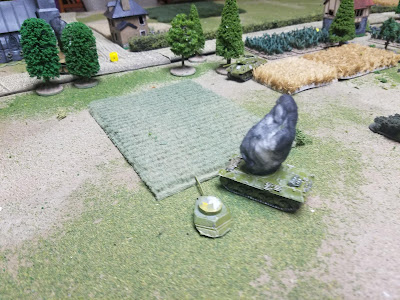 Dave opted to keep his bren teams with the infantry squads.  The 10 man squads are tough! 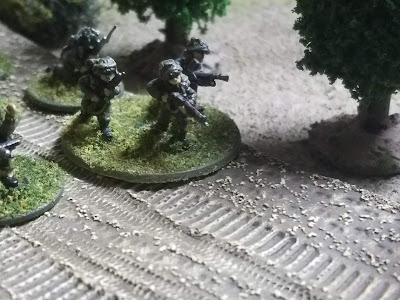 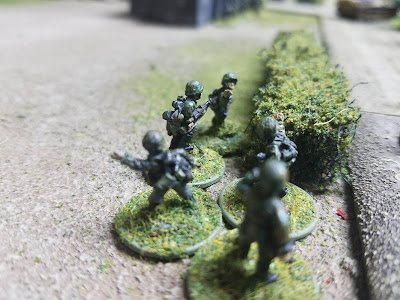 Dave is having some difficulty getting his Shermans over the ancient stone wall that criss-crosses the fields here.  2 get hung up rolling really bad to cross the obstacle, losing 6 inches of movement. 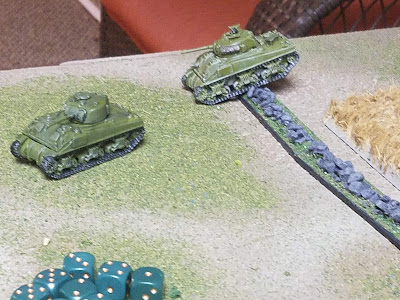 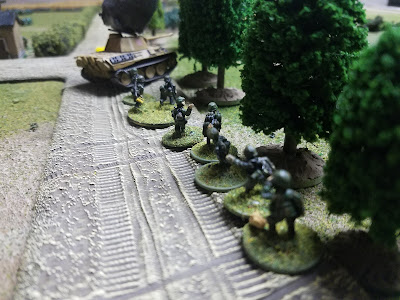 Right now, Dave heads straight for the big farm house and courtyard and digs in there along with the platoon commander.  My SS troops know that Commonwealth troops dug in are tough to root out, so they start training all of their fire on the farmhouse!  The Canadians are weathering the fire pretty well so far, but more troops are moving up!

All of the SS troops taht have arrived start moving out towards the farm house, bounding as they go.  They shoot/move or move/shoot to keep the Canadians pinned.  It's working so far, but Dave's 10 man squads are a tough nut to crack.  This definitely isn't the eastern front!


The Canadian officers notice that their men are lagging due to some issue along the road.  A mine perhaps?  A casualty?  There's no time to waste!  The command team from the platoon sprints to the outhouse at the farm to hold down the courtyard.  They're all that are on scene right now!

Dave's command group and FO move to the stone shed to hold down the Canadian flank until more infantry get on the scene.  The farmhouse is a deadly trap as bullets are flying from every direction. 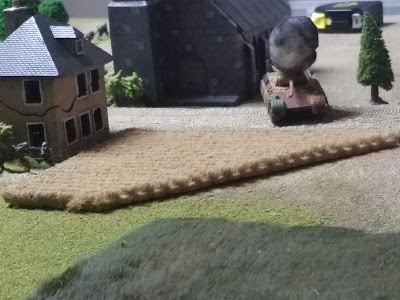 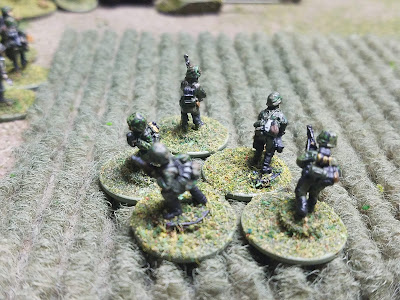 My SS infantry are hammering the Canadians, with the MG42 tripod from the church abbey filling the building with lead.  The Canadians pass test after test but finally fail one and bug out.  The SS troops, hot on their heels, move in and occupy it.  Dave holds the shed, I hold the house!  Dave still has the objective contested,though! 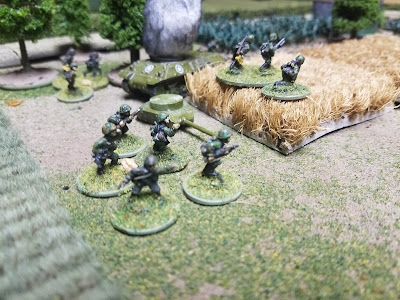 Dave's skillful use of his platoon mortar keeps my Schutzen at bay, and pinned!  I get a beyond the call of duty chit, pass the test, but FAIL my pre-assault test!  This means my last remaining rifle section is PINNED.  Dave's command group is miraculously hanging on by their fingernails, and they're almost surrounded. 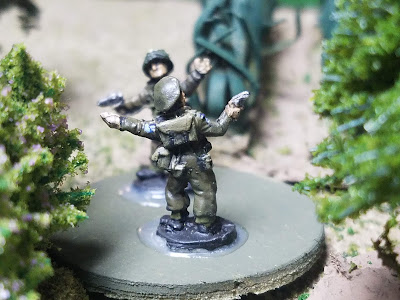 Dave wipes out the SS rifle section in the house and doesn't take any prisoners...  Meanwhile the Canadians take 6 casualties in the fight for the house cellar.  Room to room clearing!


At this point I call the game.  My BP is already at 20 out of 26 and Dave's is something ridiculous like 8 out of 29 but I realize that I have no more rifle sections to assault.  Only MG sections and there are more Canadians closing in.  We did play one more round to see if I could cause enough casualties on the farmhouse crew to keep the game going but no avail.  I tried to assault the shed with an LMG section but they, too, failed their pre assault test (even as veterans!)  So they're pinned.  The remaining SS troops bug out to the church.  Untersturmfuhrer Wilke curses as he watches the assault troops sprint back to the church.  They keep running back into the woods until the NCOs can re-assert control over the remainder of the platoon.  All in all, a rough day's fighting.

Thoughts
This game was a real nail biter.  What started out as a "cat and mouse" game between the panther tank and the achilles TD's turned into a sharp, quick infantry firefight and nowhere on this battlefield felt safe.  We did make one mistake and only used 1D6 for orders, instead of 2D6, which would have made the game go much faster.

The mortars were used to great effect on both sides and the real star of the battle had to have been the Canadian platoon command group, who held off the repeated SS assaults against the stone shed in the courtyard.  Without them there, my Shutzen could have used that building to fire on Dave's reinforcements.  Additionally, my infantry were much too slow in getting up to the house.  In this instance, it would have been better to sacrifice cover for speed as Dave had ntohing to really threaten them with in the beginning.

A great,  4 hour game and a wonderful Friday night.  Now it's back to Talavera and flocking the British and Spanish infantry!

Talavera: The Allies & The Commanders

Continuing on with the Talavera 1809 Project, I'm happy to report 98% of the French are done.  Flocked, and organized into their respective Corps for the battle!  I broke out the Allies this afternoon, including my Spanish contingent, and based them.  Almost all of the Allied troops are unflocked but I'm happy to report at least that they are all based!

With my bathtubbed project, each Neil Thomas Battalion will serve duty as a full Brigade.  I'm using the OOB from the Volley & Bayonet "Road to Glory" rulebook.  One of the posts coming up, I'll highlight the various brigades and units.  For this post, I'll highlight the commanders of the various units.
I find this really brings the battle to life on the table if I can associate the actual commanders with the miniature units on the table.


Just like during the real Peninsula War, each force has distinct advantages all its own.  The French have a slightly bigger force with 18 infantry units total.  The French have more artillery (6 batteries to the Allies' 5), and more cavalry (4 regiments to the Allies' 2).  The British have 2 rank shooting, and in NT's rules hit on a 3+.  (This is deadly.  I cannot stress enough that I have not once successfully brought home a charge against British infantry using NT's rules - but I have a plan!).Additionally, the Spanish deploy in hardened cover which will also give them a slight advantage.  The French also have the reinforcing Madrid Garrison, consisting of the Royal Guard Grenadiers.  I'm giving them almost an entire Division's worth of combat power including 2 infantry units, a heavy cavalry unit, and a battery of artillery, all of which are "elite."

And now, portraits of the commanders!

All in all, 2 very capable and big forces (at least for my table and for a game of Neil Thomas' Napoleonics).  I'm using NT's rules as they are the simplest and probably best possible choice for a quick afternoon's game and the ability to finish a battle.  Some of you may scoff, but I've found that the NT rules combine the best mix of that "old school" feel along with the ability to move the game along quickly and come to grips.

Since the forces consist of roughly 2 NT sanctioned forces each, I'll split the table with each force covering a 3 x 3 area.  The OOB will be next up, and hopefully followed by the deployment!

I have a heck of alot of flocking to do now!
Posted by Disgruntled Fusilier at 7:06 PM 12 comments: