A few weeks ago Ken suggested we play a game of Sam Mustafa's "Might & Reason" and so we tried it out (me for the first time and Ken a mere 12 years after his first game).  You can read Ken's original M&R battle report, the Battle of Reichenberg, at his blog here [click].

My thoughts were we could refight Reichenberg but Ken found this gem, here, on the downloads page on Sam Mustafa's Honour site.  Me being a sucker for the Battle of Lobositz, there was no way I could turn that down.

If you're a long-time fan of the blog, you might remember this battle has been played many times on my table with rules varying from Black Powder, to Commands & Colors, to One Hour Wargames, and so what rules set better to fight it with than a set made for epic clashes of the 18th century!?! 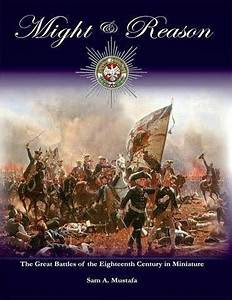 I set up the terrain and to really add to this historical treat, Ken brought over his outstanding 10mm Seven Years War Prussians and Austrians, which basically make me second-guess every SYW 15mm purchase I've ever made...

We followed the historical disposition as close as we could.  This game, the turns were decided for us in the scenario (6 turns total).  Ken and I are thumbing through the rules (Ken has a soft copy, I have a digital copy) for most of the turns to get our questions answered and I'm happy to report probably 90% of our questions had pretty solid answers within the rules.  It probably dragged the game out much longer but I think it was a good "training session" and the next time will not take quite as long.

I realize I need to get some troops into that sunken lane to defend Lobositz.  In this scenario the victory conditions center around control of the town itself.  Right now I don't have much infantry to contest it as they're all on the other side of the Morellen stream.  There are a few units to act as speedbumps in the Prussians' way but I need more troops to defend the town!

I put Kollowrat's "Division" into movement formation and get them ready to move out!

Ken's Cuirassier burst off the Homolkaberg and shatter the cream of my cavalry in a very one-sided melee as my units in movement formation are promptly destroyed one after the other! 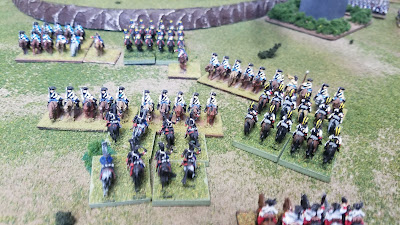 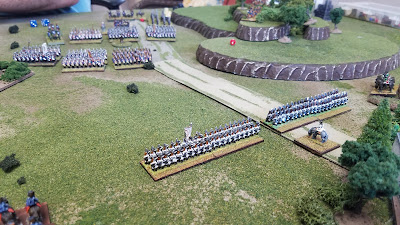 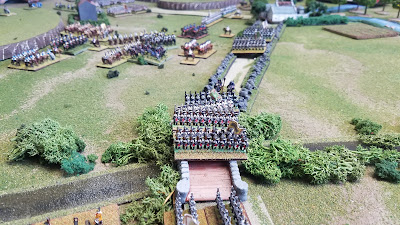 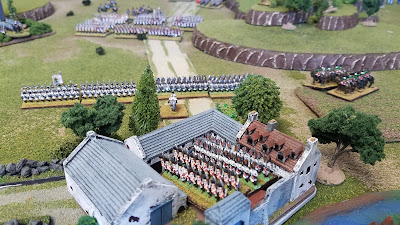 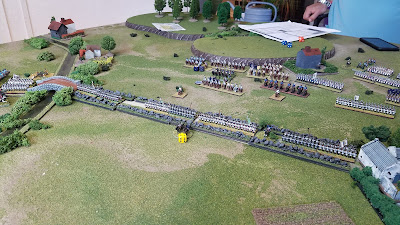 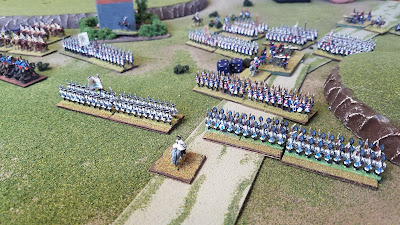 Well unfortunately we had to call it as we ran out of time.  We did leave the game up to finish next week though so I promise there is more SYW action on the horizon!

This was a great, learning game and I think Ken and I know enough to be much more dangerous for the next round.  Ken mercifully offered to restart the game after my Cavalry evaporated being in movement formation.  Throughout the game I noted the distinct similarities between Might & Reason and Fast Play Grande Armee and now I really want to play FPGA also!  In fact I'm looking forward to getting that on the table as soon as we finish Lobositz!  Perhaps a refight of Teugen-Hausen!?

Some things I really liked about Might & Reason so far:

Simple mechanics but challenging play.  While there are some nuances, the game is very straightforward and you're constantly thinking about how to set up an attack, the most advantageous way to move your troops, and shepherding your command dice.

Generous movement distances.  At this level of command, you can really focus your efforts, make a plan, and develop an attack.

The Shooting and Artillery rules.  Simple and subtle.

Linear Fighting.  Sam M. says it in the rules intro - the units behave in a manner that looks and feels right for the period.

Similarities to FPGA:  I like that the systems are very similar.  It will frankly make FPGA play even faster and I'm starting to think the Christmas MEGA GAME should be FPGA?

So there you have it.  A great afternoon of gaming refighting one of my favorite battles with beautifully painted toy soldiers and an orientation to a great set of rules.  Looking forward to next week's fight!
Posted by Disgruntled Fusilier at 6:33 PM 12 comments: