Alex was over last night for a test game of ONE HOUR GRAND TACTICAL [click] , which is a "grand tactical" variant of Mr Neil Thomas' One Hour Wargames rules.  We played scenario 12 from the OHW book "Surprise Attack" which is based off of the battle of Quatre Bras from the Waterloo campaign.  For the first game, I played the French under Marshall Ney, and Alex played the Allies under Wellington.  This led to me saying at the end of almost all my turns, "your move, Wellington."

We each chose a "special" extra unit.  So we diced for the usual Neil Thomas order of battle for 6 x units, but got to choose an additional unit.  I was already "blessed" with the OOB for having 2 x Artillery batteries, so I chose a unit of the Old Guard.  Alex wisely chose a skirmisher detachment of the 95th Rifles/South Essex!  We can only hope Sean Bean was in command.

The French start with the initiative for the game.  So on turn 1 they start but we contested it every other turn, with the reacting player needing to beat the die roll by "2" to steal the initiative away.

Alex uses a tried and true tactic for this scenario and retrogrades his Dutch forces back towards the crossroads with French brigades of D'Erlon's Corps hot on their heels.


Turn 2, my artillery runs out of ammo and needs to resupply.  Ugh!  I can scarcely afford to spare an order on artillery resupply but I need the guns to capture the village.

End of turn 2, French Brigade under D'Erlon begins skirmishing with the Dutch forces on the outskirts of Quatre Bras.  The sounds of battle begin to escalate and Ney attaches to a Brigade to get extra reinforcements up to the town ASAP.


The French spend an order on resupplying the Battery and the artillery is ready for action now.

I dither for a few turns and just am not getting the orders to do what I need to do.  Meanwhile my Brigades are starting to get into trouble with the Dutch.  This has to stop and soon!  Beginning of Turn 6, the Dutch under Wellington's command steal the initiative from the French so in a sense, get 2 turns back-to-back.  It couldn't have come at a worse time!

Heavy combat on the French left as a Brigade under D'Erlon melts away from solid Dutch shooting.  One facet of ONE HOUR GRAND TACTICAL is your shooting strength never diminishes even if your physical strength does.  Physical strength points are extremely important in melee and for the overall health of the force but brigades will mostly be able to issue fires well.

My center brigade goes in, in support.  The "good" news about the left most brigade being destroyed is it opens up a fire lane for my battery to shoot.  They whittle down the Dutch even more and my center brigade close assaults.  Timing in ONE HOUR GRAND TACTICAL is up to you with the more loose sequence of play.

You are sequencing things, so staff work is important!  Alex and I noted that we were constantly making decisions about the main effort and centers of gravity.

There are 2 French Brigades in the vicinity of the crossroads with a Dutch Brigade stubbornly hanging on.  My Cavalry is quickly approaching from their flank march, also.  In ONE HOUR GRAND TACTICAL, you can "MARCH" your units and add an additional D6 of movement.  Alex and I discussed at-length the ramifications this would have for units and the outcome of the game, especially regarding the "cost" of marching.
At this point, with no "fresh" Brigades in sight, I throw in the Guard!  [click here to watch the video]  Truth be told, I should have committed them right away, but I kept them in an operational reserve.

Alex's reinforcements march in in the form of the British cavalry and the Rifles.  Alex positions them very well to take advantage of cover and still threaten the lead French Brigades.  They're a great covering force while the British units get into position.  It was great to see you making "real" decisions about the timing and deployment of units IE screening forces, fire lanes and battery deployments. 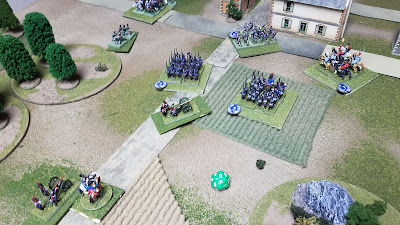 It's SUPER important to note here that I totally forgot about writing in the RALLY order.  Which I most certainly used during the Talavera game.

If a Brigade rolls a 4+ on a 1D6, they may rally off 1 hit.  If they roll a "6" they rally off 2 hits.  It's a vital order and can keep your units in the fight much longer.  Alex asked the question as the Dutch brigade withered assault after assault.  I'm embarrassed that I forgot it!!!  Alex starts rallying off the Dutch hits as the British get into position behind them.  Attached commanders lend a +1 to the rally, also. 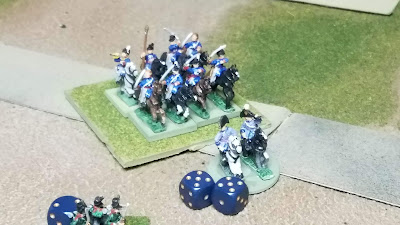 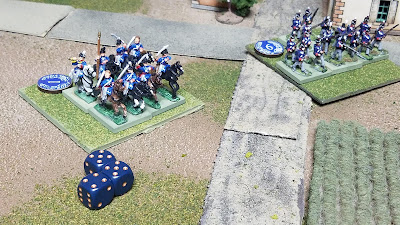 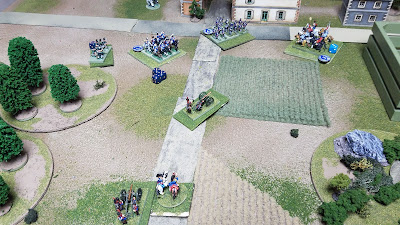 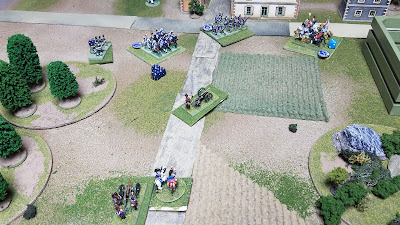 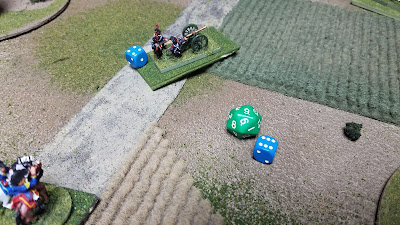 The only hope now rests on my Guard and the artillery to punch through.  The Guard is charged by the impetuous British cavalry! [click to watch the video here] 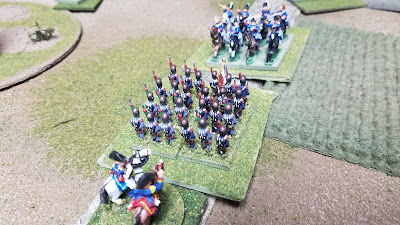 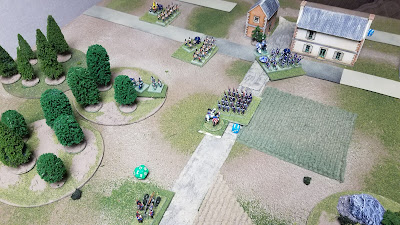 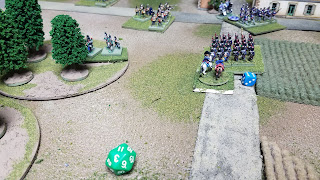 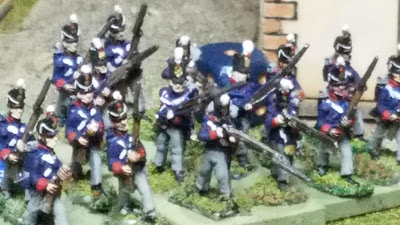 Alex wins by a comfortable margin with all of my French units wiped out.  In retrospect, I should have moved in a more concerted and supportive manner.  I left my artillery behind which was foolhardy.  Additionally, the Cavalry should have been closer to the action directly behind the advancing infantry and artillery.

We switch sides and play a second time and Alex uses this exact same strategy keeping the infantry mutually supporting.  He also wisely uses his Cavalry to screen the advance.  In ONE HOUR GRAND TACTICAL, re-positioning a Brigade, pivoting in wargame terms, eats up half of your movement.  Alex chose to speed his Brigades into position and to protect their flanks, used his Cavalry to guard the road on which the British would show up.  It's a great move and it takes me a long time to knock that Cavalry unit out of position.

During these 2 x games, we codified the role of the commanders and the mechanics of how they function on the battlefield, which is more as markers than as units.  They bestow a free order onto any unit they are with, as well as a modifier when rallying.

The fire combat aspect works very well, and I believe the close combat / assault aspect also works very well.  Scenario-dependent, most infantry brigades will be allowed to fire 1 "skirmish die" at 2 base widths, and 3 "volley dice" at 1 base width.  In honesty, your most valuable tool are your infantry brigades, who assault with great power if you've conserved them well enough.  They can run out of steam quickly, though, so combat power needs to be shepherded for the decisive blow.  Most infantry brigades will start a battle with 7 strength points and if going into assault at full strength will assault with 7 dice!  That's very powerful.

Artillery is potent and very powerful but cannot be unsupported with only 3 strength points, as they can be driven off by a single brigade or skirmisher detachment easily.  Cavalry, too, should be used appropriately as they only have 5 strength points.  Cavalry is blown rather quickly after a charge and so they should be committed to assaulting to break through an already weak unit.

Alex and I didn't play with GO STATIONARY but we did "try" it as an experiment and it would have been lethal on the attacker.  So GO STATIONARY is a useful tool for holding a position as well.  It enables you as the defender to fire a 3 dice volley at the enemy prior to close combat even starting.  If you roll well, this could be a huge boon to your defense and might just turn the tide in the combat.  It also makes rooting out troops in cover that much tougher as the attacker loses a die against units in cover.  Make sure you have the artillery when assaulting troops in cover...

Additionally, we discussed the MARCH order at great length.  If using a MARCH order, your brigade is sacrificing safety in the interest of speed and it will take a turn to "reform" into combat formations.  Some units will be better than others at this (IE French over 1806 Prussians).  Units utilizing a MARCH order cannot enter into combat on the turn they march.  Still working out the particulars of this, but as-played it gave Alex and I much flexibility on the tabletop.

These games showed some great strengths and nuances of the rules and we will definitely play them again.  I feel they should work well within the confines of Neil Thomas' scenarios, as well as for "open" play, however with some adjustments for orders if using a historical OOB.  There could even be more commanders / Aides markers on the table to enable even more flexibility.

Many readers have commented on a small, fixed number of orders based on the commander's talents and abilities.  So perhaps a solid French commander rates 2+1D6 for orders, while the Prince of Orange only rates 1D6.  Personally I love this especially for adding flavor to an order of battle.

The game gave a great time and I can't wait to play it again.  Already looking forward to applying it to more linear, 18th century games especially the Seven Years War and the American War for Independence.  Alex timed our second game and despite a small intrusion from rain, we were pretty much at 1 solid hour to play out the entire game.  Mission accomplished!

Now if you'll excuse me, it's time to go paint Orcs!
Posted by Disgruntled Fusilier at 11:49 AM 13 comments:

EAGLES CHEAPER THAN BRAIN CELLS
0.0 Grey Areas.  Define in “either/or” terms and resolve with a friendly roll off in the winner’s favor.
0.1 Pre-measuring.  Allowed any time. Scale. 1” is 50y. A turn is about 15-30 minutes of In/Action.
0.2 Units.  There are four types of Units, representing typical formations.
0.3 Strength Points. Infantry 7SP, Cavalry 5SP, Artillery or Skirmish Battalion 5SP. Whenever a Unit takes a Hit, mark the loss of a Strength Point. When all SP are gone, the Unit is removed from the game.
0.4 Figures & Basing. Sabots or stands totaling 4x1-2” lines or 3x3” squares, containing stands of Infantry, Cavalry or Guns as appropriate.  Units of multiple small bases fight with front edges and corners aligned.
0.5 Base Widths. These will be 4” or 3”, and should be consistent with all Units.
0.6 Unit Sides. The Front is measured 45° off the Unit’s two Front corners; this is its Field of Fire and Charge Arc. The Rear, Left and Right Sides are similarly measured: enemy Contacting them get bonus assault dice.
½BW+ of the Target Unit’s closest Side needs to be in the Front Arc to be Fired upon or Assaulted.
0.7 Line of Sight.  LoS is measured from a Firing or Charging Unit's front center point to the center of the closest visible side of the Target Unit Base; Front, Left, Right or Rear.  It is blocked by anything intervening and apparently taller than figure height e.g. hills, woods, towns, and Units [cavalry are the tallest Unit].
Units must have LoS to Fire or charge enemy Units at the time of the shot or charge.