Wow with all of the ridiculous travel I've had for work of late, I've still somehow been able to knock out my OPFOR Soviets for the Dunn-Kempf project!  Wohoo!  So sit back, grab a cup of strong black tea, and feast your eyes on some Cold War combat power, courtesy of the peace loving peoples of the Soviet Union! 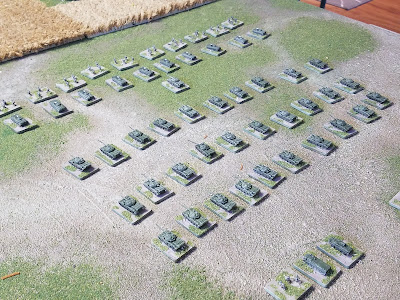 Total forces are just about what you'd get in a Dunn Kempf pack to include a tank battalion of 31 T-62 tanks, a mechanized infantry company in 10 BMP-1s, a fire support BRDM, a command vehicle, an Anti Tank SAGGER platoon, and an Anti Aircraft Artillery platoon.  I have 4 x Hinds but have not yet started them.  Airpower will be another post.


I'm also really excited to use these troops for Team Yankee / FATE OF A NATION, albeit with historical MTOEs instead of the recommended points-based organizations.  Dont be surprised to see FATE OF A NATION transported to Central Europe, either!  (IE Team Yankee 10 years prior to 1985) 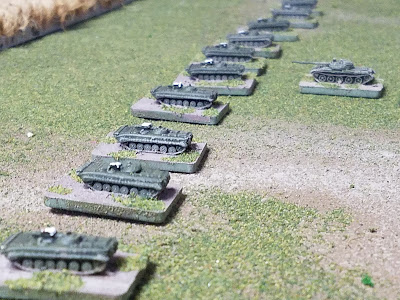 I do admit I need to touch up the paint for the infantry.  Probably just use some highlights and redo the helmets and they'll be good to go and ready to liberate Western Europe from the yoke of capitalist oppression... 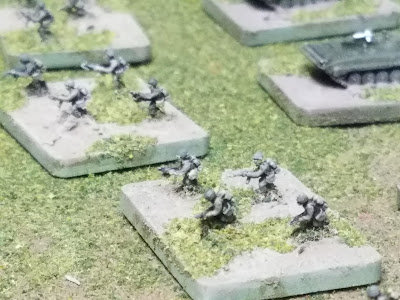 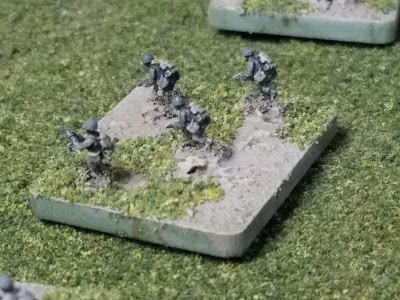 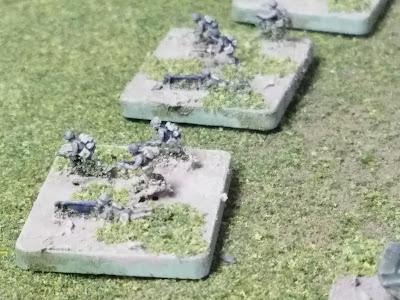 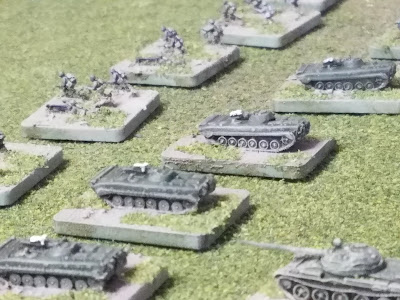 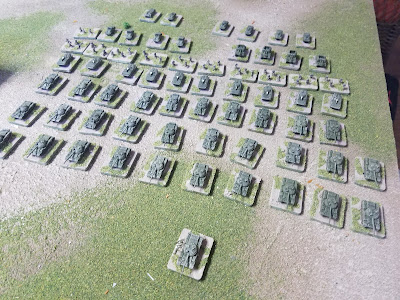 Speaking of the Arab Israeli Wars, I've also started work on the FOAN stands which I've shown below.  Still lots to do in the AIW department.  This time I'm doing most of the bases' groundwork prior to doing the vehicles.  Kind of a lesson learned from the Soviet DK project. 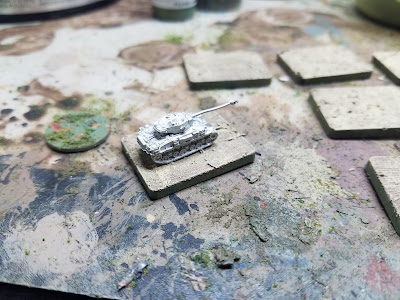 So as I wrap up the Dunn Kempf project, I still owe you all some posts on the rules and gaming aids (markers), etc.  I think I'll even post a quick tutorial on how to play... once I figure it out!

Dave and I are supposed to do a game next week.  At the rate I'm going, that might be tank-only since I have all the US stuff to do next.  It's slow going, but progress none-the-less!

And speaking of US Forces, here are some GHQ US Troopers in BDUs (yes, I painted the woodland camo on them) along with some of my favorite, classic H Series MTOE vehicles.  All of these guys will get the same treatment as the Dunn Kempf Soviets - rebasing on bigger bases for Team Yankee, etc.  THIS IS FOR YOU, DON! 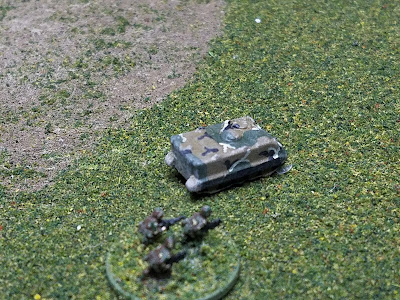 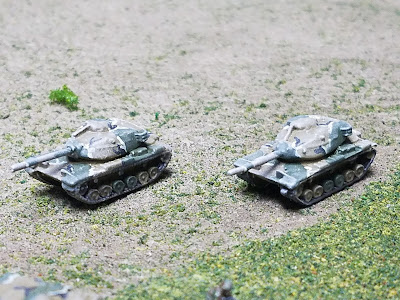 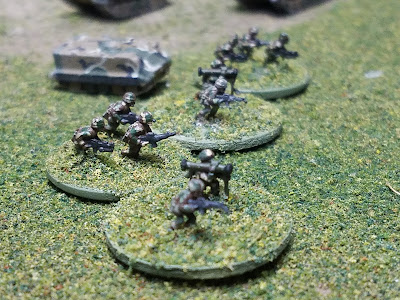 Posted by Disgruntled Fusilier at 11:25 AM 5 comments:

I decided that my 6mm micro modern Soviet infantry needed a bath.

So I dunked them in water for about an hour and a half which did the trick remarkably well and presto!  They popped right off their wooden bases!
Now that they're off those round bases, I'm going to consolidate them and mount them on FOW small sized bases, both for Team Yankee and for our Dunn-Kempf game. 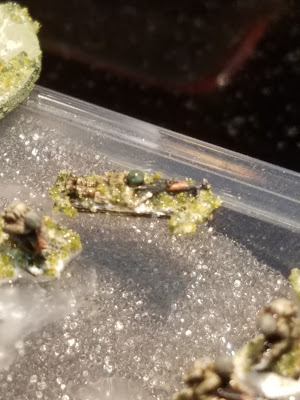 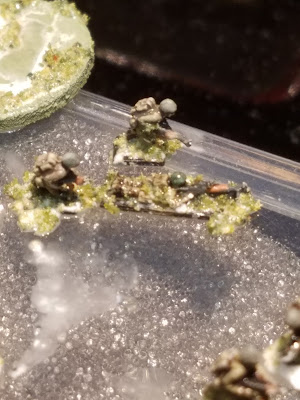 You have to love the detail on these GHQ infantry bases.   I'm really liking them, and with the "Tiny Tanks 3mm" TEAM YANKEE HOUSE RULES being published, I'm going to use them soon in a game.  I also ordered more infantry for use in FOAN battles as well. 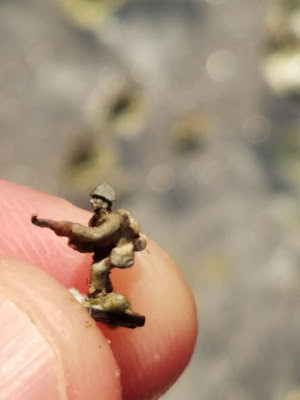 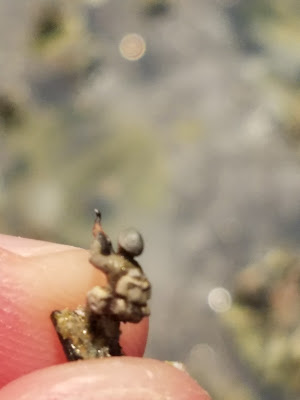 Anyways that's about it.  Not much time for gaming or much of anything else (except purchasing things...).  Big plans coming up, though.  Still haven't forgotten about Talavera, and there's a Dunn Kempf test game in our future, as well as Team Yankee and Fate of a Nation 6mm games as well!

I used the GHQ sale that's going on right now and bought a shed-load of armor and infantry.  That will complete my Fate of a Nation Arabs/Israelis and it's too bad, really, that I really cant justify going back to GHQ and buying up all my East Germans (would need 7 packs of T-55AM2s, and 6 packs of BTR60s, and then probably another 2 packs of infantry...  I mean...I'd like to.....but I wont.

Hope you're having a good week.

This weekend I was able to work a little on my Soviet "horde" of tank companies, carriers, and support vehicles including the recce platoon, AT platoon, and AAA platoon.  They're not done yet - probably about 80% now I just need to do some flocking and re-mount the infantry from pennies to larger stands.

First up are the tanks and Infantry Fighting Vehicles.  The total maneuver force is 31 x T-62s organized into 3 x companies of 10 tanks, and the Battalion Commander's tank.  Also a cross-attached mechanized infantry company in BMP-1s.


The ground texture is either vallejo sand or vallejo "european mud" painted tamiya flat earth.  It will be very lightly dry brushed and flocked soon enough.

Probably worth mentioning here that my desert Arab-Israeli forces will get the same treatment.  These guys are being based for TEAM YANKEE in 6mm, DUNN KEMPF, etc.  They're all based on Team Yankee/ FOW sized small bases.  I plan on doing this same thing for WW2 as well to play FOW. 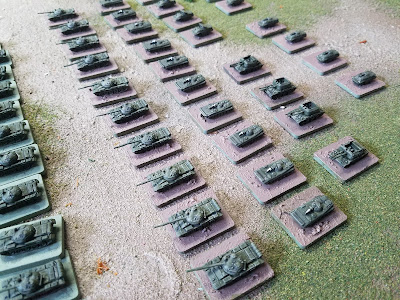 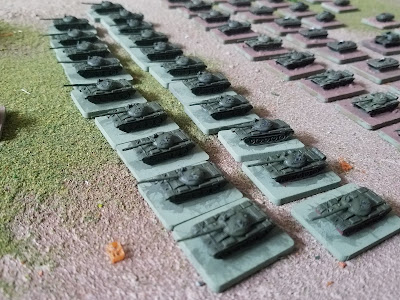 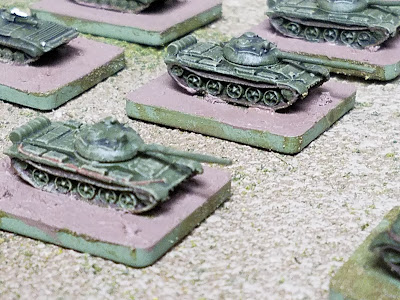 In TEAM YANKEE or FATE OF A NATION the platoon leader's vehicle must be distinguishable so these SAGGER ATGM  vehicles have a red "star" on their platoon leader's hull.  Same with the recon boys, and the Anti Aircraft Artillery. 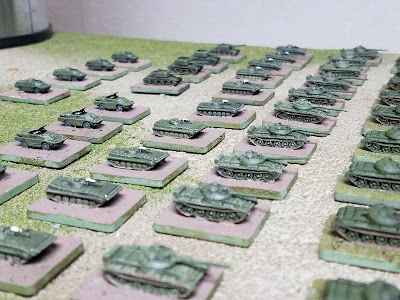 That's all for now.  Work is a bear lately so I'll be off the net for a little bit.  Stay tuned, though.  More on Dunn Kempf coming up like working out the "To Hit" and "To Kill" percentages, as well as Orders of Battle, maps for the battle, fireplanning, and of course the West Germans, which I am hoping Dave can send me pictures of so I can post for the project.  Until next time have a great week everyone!
Posted by Disgruntled Fusilier at 7:27 PM 14 comments:

Last week Dave and I got together and hatched a scheme that we might just be able to pull off.  We were looking for a modern rules set to host a WWIII game at a future convention.  We tried a few engagements out with a handful of BMP-1s, T-72s fighting against another handful of BMPs and T-72s.

We ran through 3rd Generation Warfare, Battlegroup: REFORGER, Team Yankee, and a few others.  While all of them were fine in their own right, none of them were really unique.  Our big question to answer? What might be a worthy experience to bring to a wargaming convention?  Enter Dunn-Kempf.

How about the US Army's tried and true training "game" that saw innumerable spin-off games born from its simple principles of fire and movement?  "If you can be seen, you can be hit.  If you can be hit, you can be killed."  Dunn Kempf was itself born from the old WRG "modern" rules but was simplified so Soldiers could easily grasp the lessons it taught - mainly to move out of sight of the enemy, to utilize cover, concealment, shrewd fire planning, reconnaissance, and ATGMs to "win the first battle of the next war."  While none of the mechanisms in DK are unique to a grognard, playing the game using the percentage to-hit and percentage to-kill will be a worthwhile experience and show the Soviets as a thinking and very dangerous foe with no shortage of artillery batteries to plaster German hillsides.

You can read more about Dunn Kempf here.  Suffice to say, Dave and I are going to host a DK battle at a future HMGS convention, but with a little twist.  The forces will be West German fighting Soviets!  (I'll explain that in a later post).  You can download a free QRS for Dunn Kempf that has most of the rules in it here. [you will have to log in to board game geek with an account but it's well worth your time!]

I'll be working on the ground-cover and flocking on my Soviet bases and after the vehicles are done, I'll start on the infantry next.

These are on small FOW MDF bases and I'll also be using these for "Fate of a Nation" and "Team Yankee" as well. 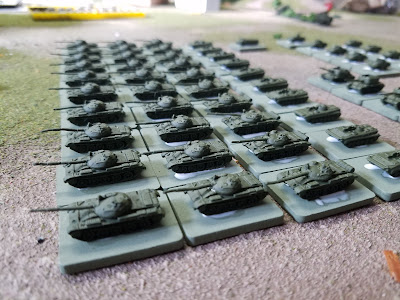 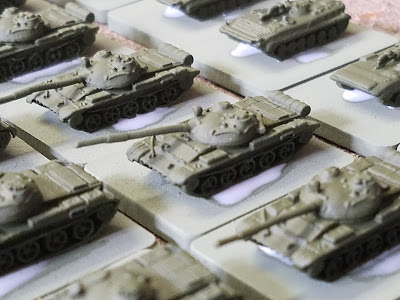 Okay while these are drying, I'll be flocking British and Spaniards for Talavera.  Hopefully some outstanding Napoleonic action coming soon.