10mm Quatre Bras. Kind of. Sort of. Not really. Nice Pictures Though!

I was recently looking at my fine collection of 10mm Napoleonic troops and thought I'd take them for a spin with a scenario reminiscent of Quatre Bras (and on the same map taken from the Volley and Bayonet rule book) with the excellent "Black Powder" rules, which I've found give me everything I need in terms of Horse and Musket wargaming.  This would be slightly "bathtubbed" as I dont have enough units to do Quatre Bras by Battalion, but you get the idea.

A lone Netherlands Brigade (actually converted British into Portuguese but different looking than British so I used them) and an Artillery battery guarding the pass until the Prince of Orange (Command Rating 7) can bring up a large column of British troops. 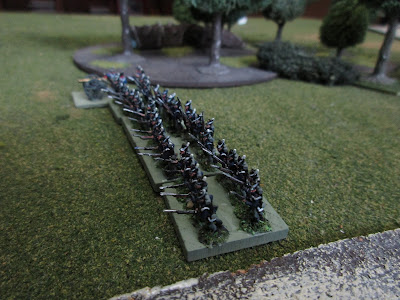 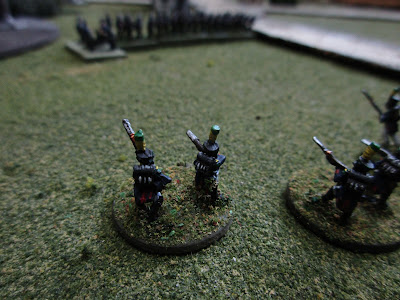 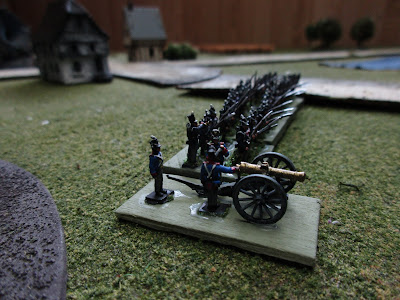 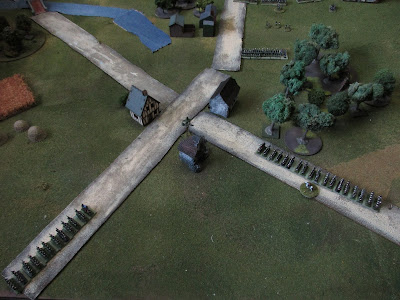 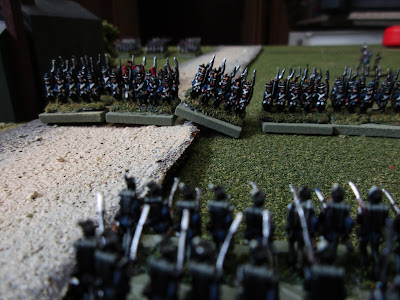 More To Follow!  Will the British columns arrive in time?  Will Ney seize QB and change history?  I plan on playing more this evening.

So yes you're thinking that I vowed never to touch another scale miniature except for my beloved 15mm right?  Well you're correct.  But these guys look too good not to play with!  So right now, in the backyard, there are 4 huge paint stirring sticks (the ones you use for a 5 gallon bucket) loaded with spray painted British and French infantry, Cavalry, lights, Generals (Ney, Wellington, Picton sound familiar?) cannon, the whole 9 yards waiting to be painted.

I'm really liking how a massed collection of 3 stands (30 figures) looks compared to my 15mm stands of 12 figures (Sparker called it a "corporal's guard" in one of his posts) and i tend to agree.  Napoleonic wargaming is all about massed blocks of troops and sweeping maneuver.
Posted by Disgruntled Fusilier at 4:07 PM 7 comments:

Axis & Allies Miniatures: Dont Knock it Until You Try It!

I casually wrote off the AA ground-based miniatures game years ago but recently with my foray into hex-based miniature games I thought I'd give them a shot.  I have the rulebook (which is also available as a free, 30 page download here), I have the hex mat, so what if I tried playing it with my 15mm WW2 miniatures?

You can download all of the cards and statistics here, at the Axis and Allies Miniatures card database.  I used their "rifleman" as a rifle section, their MG34 team as, well, as an MG34 team, and used their MG42 team as a tripod based MMG section.  (I had to sub the Pak 36 as a Russian M1942 but it's the same gun so Alles Gut!)

I played the Introductory Scenario from "Schwere Kompanie" which is great as there are a handful of squads and MGs on each side.  The Russians have their 45mm AT gun, and the Germans have a Panzer III.  The Germans must capture the village.  (come to think of it, this will also make a good CROSSFIRE game, which I intend to play soon).

The Germans move up to the line of departure with 2 platoons and a tank in support.  Their mission is to capture yet another village on the map in the endless expanse of Soviet Russia... 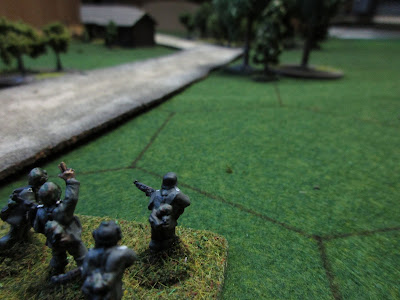 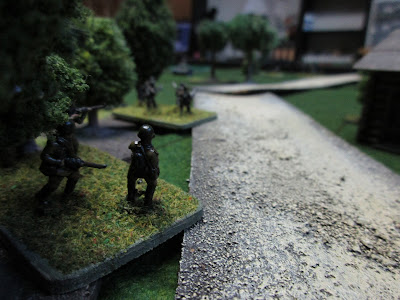 AAM has a nice sequence that allows for simultaneous fire by having both players fire, but applying casualties in a separate phase.  The German Panzer III fires an HE shell at the gun and hits it dead-on as the Soviet crew gets off one good shot that bounces but stuns the crew!  The Pz III is "disrupted" while the Soviet 45mm AT gun is toast! 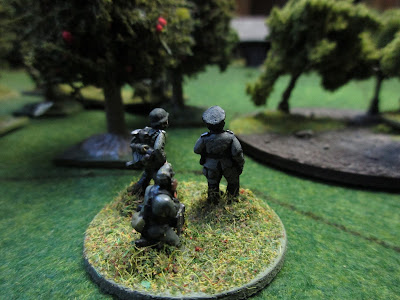 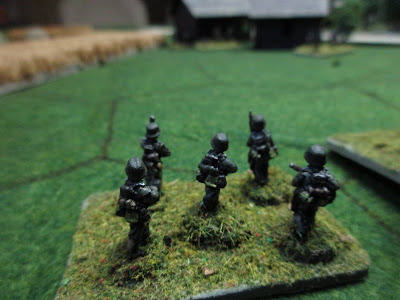 The Germans are making slow progress, but progress none-the-less.  Infantry move 1 hex and the village is 7 hexes from the startline! 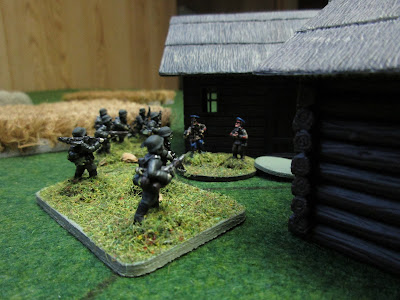 Well like the title says - don't knock it 'till you try it!  This was a very interesting and fun game.  I think I like playing Axis and Allies miniatures (I cut my teeth on the Milton Bradley Board Game in middle and high school) occasionally and will definitely play it again.

The systems for battle are very interesting.  You must roll more "successes" (4+) than your opponent's defensive rating.  (most infantry defense ratings are "4").  Much easier said than done!  Each system has a range band of close, medium, and long and has varying numbers of dice at those bands with which to try and inflict hits.

My thoughts are if know of some youngsters who are liking the "concept" of miniature gaming, then this is a perfect game to introduce them to the hobby.

This was a fun game which I very much enjoyed.  Some games coming up on the horizon include Battlegroup Panzergrenadier Deluxe, Crossfire, and darn it I ought to play a Napoleonics game because according to my schedule, May is Napoleonics month!

Ponyri Station: Updates from the Front!

Every day I've been slugging out a few grueling rounds on the Eastern Front either before work or right after world.

All eyes are on the deepening nightmare of the Zitadelle offensive and specifically, the struggle for Hill 253 and the first of May Collective farm.  2 objectives coinciding with the 507th infanterie regiment's drive on Ponyri Station further west!  We pick up where we left off with the drive just leaving the line of departure.  2 German battalions are cautiously advancing into the jaws of the Soviet infantry defense.  Soviet pre-registered fires don't accomplish much and the Germans pour on the left flank, urged on by the presence of the Regimental commander.  They lose some casualties to Soviet rifle and MG fire (1 platoon KO) and the rest of the battalion crashes against the Soviet position on Hill 253 like battering storm surge waves!  Mortars in full support.  They grab a foothold in desperate hand to hand combat for some of the log emplacements Ivan's fighting from!


The 1st Battalion is able to reinforce their gain on Hill 253 yet they are not the undisputed masters of the hill.  There is still a Soviet platoon and command element on the hill.  The Germans, licking their chops are about to fire on the Soviet CO when their momentum runs out (they bust their command roll). 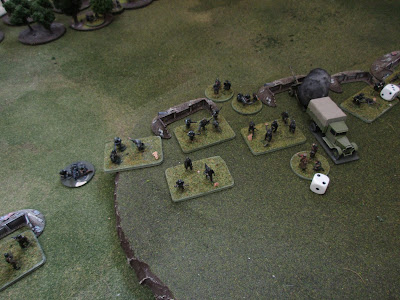 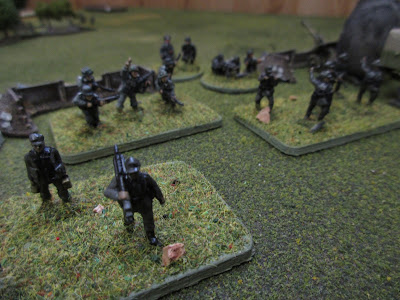 Just when things look most bleak for Ivan, the 27th Tank Brigade comes roaring (clanking?) atop the hill and immediately counterattacks by fire.  1 German platoon is push off the hill due to the Soviet fire. 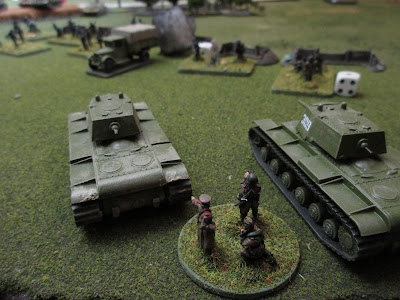 Meanwhile things on the German right at the collective are going much better.  The 2nd Battalion captures the first in a series of hamlets and store houses, wresting control of the Collective away from Ivan one at a time. 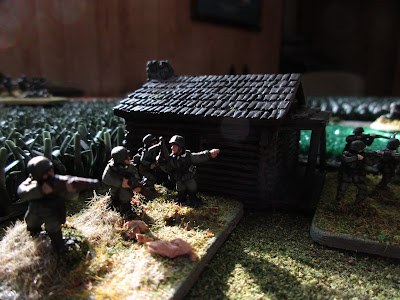 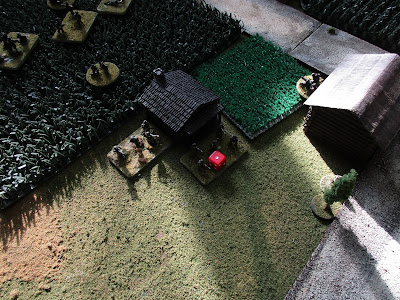 The Russians, try as they might, cannot get the 1,442nd SP Arty unit to move.  They're planning a warm reception for Fritz up Hill 253 with their howitzers at assault range! 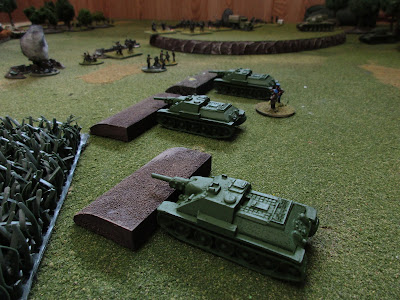 The Russians meanwhile are losing their grip on the collective farm.  The see saw battle that is Kursk continues! 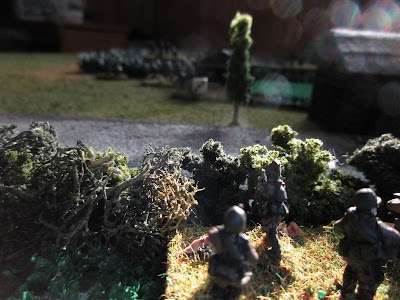 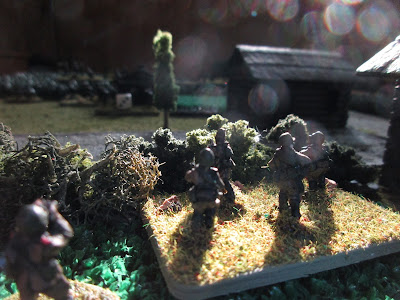 So a few things I could have done better thus far - no real fire support even though the Germans have 2 batteries of heavies, as well as a nebelwerfer battery in General Support.  The Soviets, who only have pre registered scheduled artillery also have many batteries in support but cannot use it yet, have also remained relatively artillery free, even though a majority of the killing ought to be done by the big guns.  Next time I play this, it would probably be wise to try and incorporate airpower into the mix.  So I guess producing (or actually using) my Fire Support schedule would be wise next time.

I wonder how much differently this would play using "BATTLE"???

Also - needing to check out Jim Bambra's COMBAT HQ next (Darren - that's for you.  Once I actually get the chance to try it out.  I've been reading it on the train and it looks fascinating for this command scale (1:4)
Posted by Disgruntled Fusilier at 7:20 PM 2 comments: