So with all of the craziness yesterday we were able to get caught up around the house prior to going up to celebrate my mother's birthday today.  In the morning though, I had some precious free time on my hands and turned the patio into a makeshift workshop to build some models.  3D PRINTED MODELS!

As most of you know if you've been following the blog, my basement is in shambles right now and all of my stuff is packed up or pushed to the center of the room.  Just wait until the floor needs to be installed....That being said, it hasn't been "too" difficult to get access to some of my supplies.

The selection of vehicles worked on today was mostly from my first Butler's Printed Models purchase, and a couple vehicles from "Bashytubits."  I thought I would do a small review of both of the lines on this post. 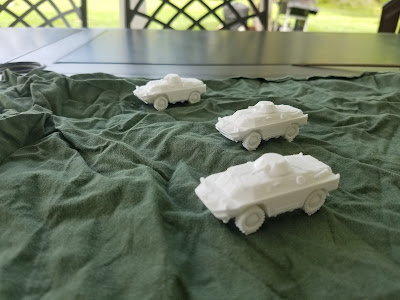 The BRDMs were a joy to prep for painting and the amount of "stuff" that had to be removed was not bad compared to the tanks and BMPs, which have huge amounts of extra stuff hanging off them.

The Butler's models are clean and crisp with lots of detail.  Next up are the rest of the BMP-2s from the first order.  I bought I think 4 more in the second order which will give me 12 BMP-2s if you don't count my "quality casting" ones, which I think I'll use for a  reconnaissance platoon now. 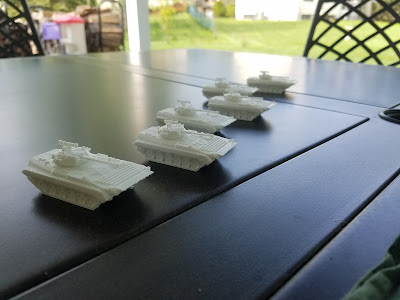 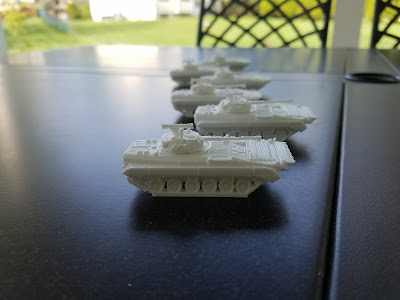 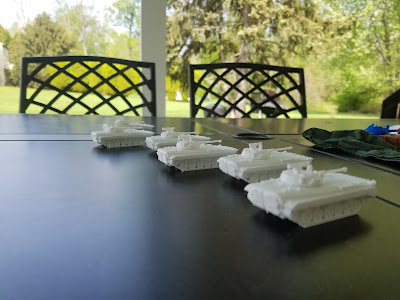 The Butler's models are a very hard plastic, but also a porous plastic so you have to go over a few times with the rattle can when priming them as they soak up alot of paint.  But overall, I'm VERY happy with them.

The Bashytubits models have alot of extra material on them and require quite a considerable amount of effort to prep for painting.  They also have lots of lines, presumably a by-product of the printing process, which I think will turn some people off.  I've seen people on both TMP, and even my own blog go into a rage when they see a mold line on a 1/72 figure, so Bashytubits might not be the road they want to go.

That being said, they're completely worth the price at 5 dollars a model.  They're all going to die on the table (quickly) anyways and get covered in "smoke" and "blown up vehicle" markers anyways so I'm personally ok with the lines.  Look at it this way - you can pay Battlefront 40 dollars for 4 vehicles, or your can pay BTB 40 dollars for 8 models.  I chose BTB. 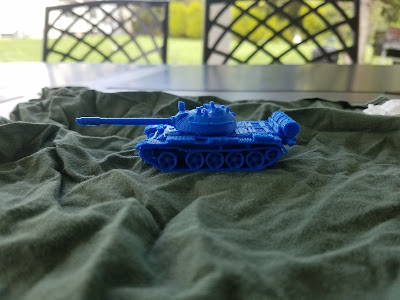 Just dont say you weren't warned at the amount of crap you have to whittle off of them. 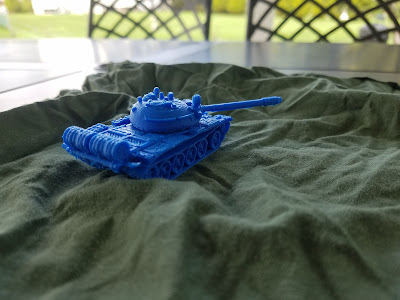 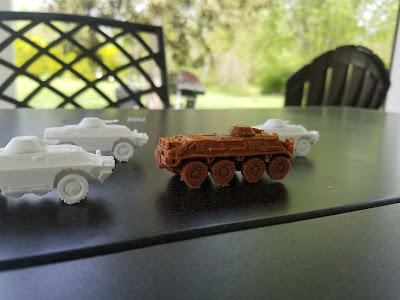 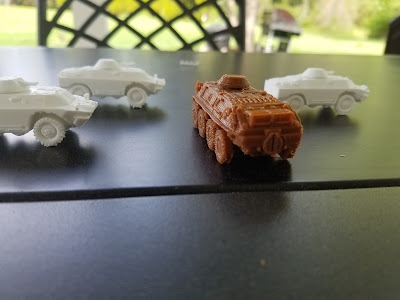 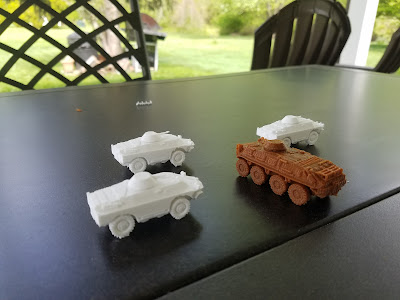 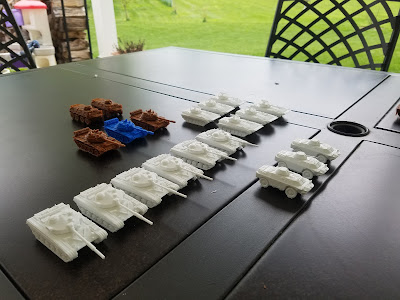 And a German Leo II for you, of which I bought 4.  Again, lots of printing lines on this beast which I am personally ok with, but again, fair warning, some people might not be. 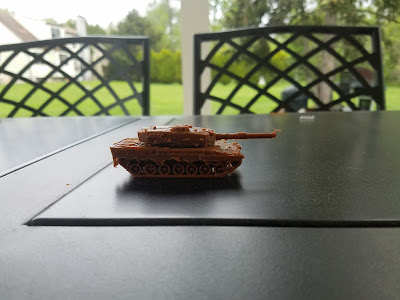 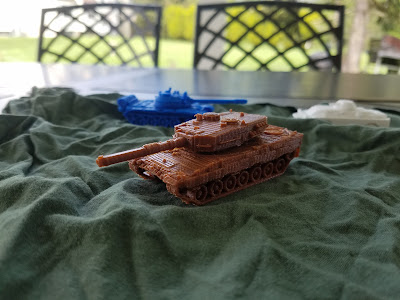 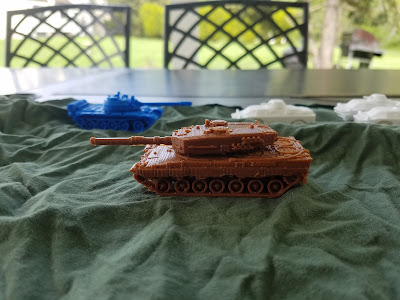 Last but not least, here is the pile of sh*t that I took off all of these vehicles.  The nice straight pieces that are along the tracks can easily be used to make a 15mm fence for terrain.  You better believe I will at least try! 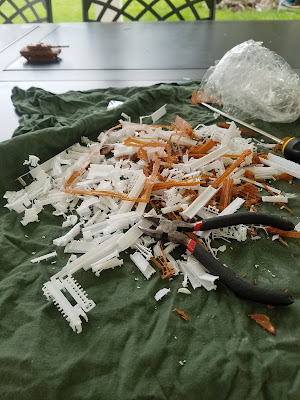 This weekend the weather was very nice and I couldn't help but think I could have played some outstanding games of OUTDOOR CROSSFIRE under our covered patio.  I might give that a shot next weekend if the weather is similar!  Again, no basement?  NO PROBLEM!
Posted by Disgruntled Fusilier at 6:44 PM 2 comments:

As promised, Sanity Paint Session #2 has been posted.  Again, I've certainly painted better, but hey it's a completed Regiment and hopefully sandwiched between my better painted Yanks I won't be able to tell the difference!  Still, they're not bad for a crappy desk lamp and the only brushes I had access to... 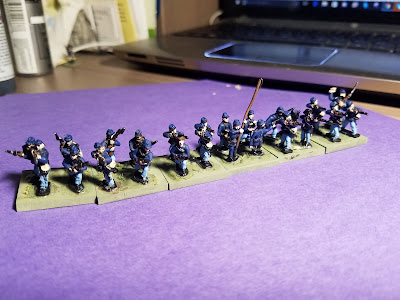 Lots more work done at the house today, this time repairing a sewer line that went bad.  Now that that's been taken care of, there are still some major projects to go but at least we're getting there. 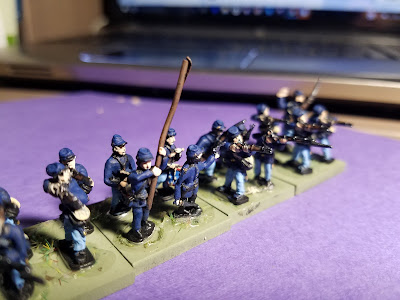 Painting these guys up really makes me want to play Johnny Reb III or at least the Neil Thomas ACW game.  Oh wait....my table is shut down for now! 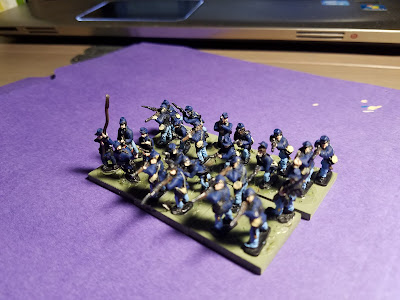 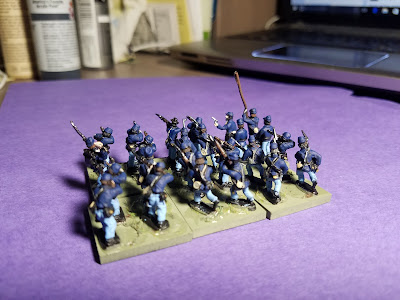 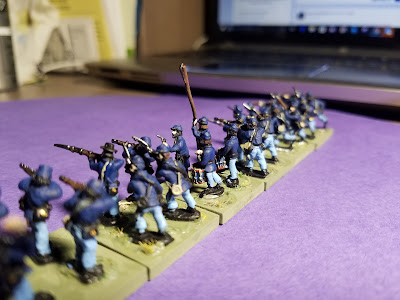 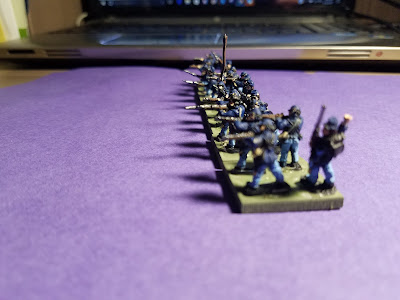 A Bundewsher mechanized platoon is up next!  Stay tuned! 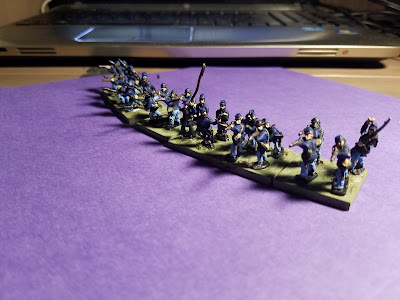 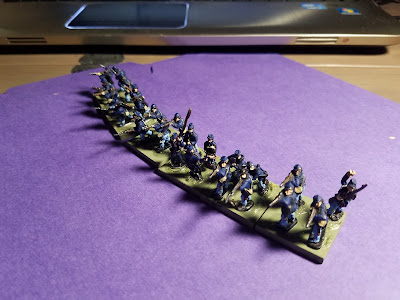 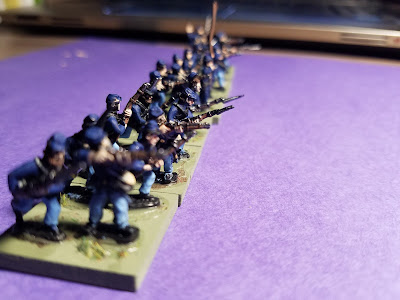 The thought also occurred to me that since I can't really game or paint, I can at least ASSEMBLE all of the hordes of vehicle kits I have laying around.  That doesn't require a ton of light like painting does.

Anyways, my German HEER mech platoon is up next, and then my US National Guard or 1970s infantry to follow.
Posted by Disgruntled Fusilier at 8:09 PM 4 comments:

As I alluded to in a previous post, I was able to smuggle some 15mm basecoated troops out of the basement before the big job started.  I had a ton of units that were basecoated and were basically just sitting on paint stirring sticks awaiting their uniforms.  Most of my precious free time was spent finishing up my Germans and Soviets for Crossfire, so painting anything but World War II troops was welcome! 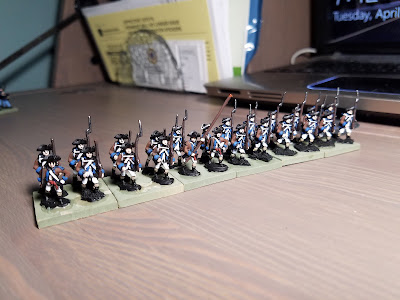 Additionally, if I had a dollar for every time I wanted to retreat to the gaming den the last 4 days, I'd be a rich man.  What's the saying about you only truly miss something when you no longer have it?  Well I'm only out of gaming down there (and let's face it - hobbying down there too is on hiatus) until probably June) and already I miss it very much. 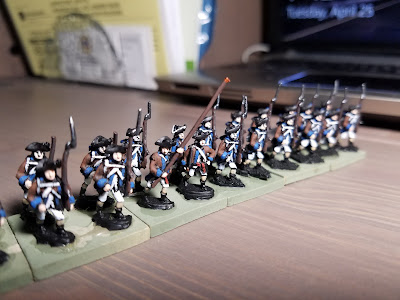 Admittedly, there is nothing special about these troops.  The paint job isn't my best but to tell the truth, it was much fun painting them because I have been missing painting and gaming lately.  Plus with all the craziness going on in our life lately with family things and the house, it was much fun to just sit down and throw some paint on these troops and it really took my mind off things.  Even with my crappy brushes and cheap acrylics, this was a sanity paint session for me. 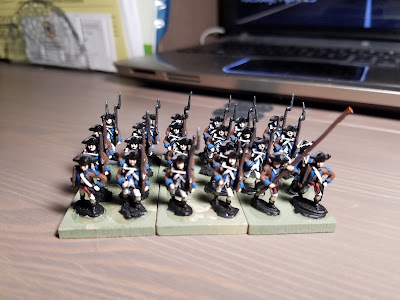 So with that said, here is a purely fictitious Continental Line or State Militia unit from Pennsylvania during the American Revolution.  I say fictitious because I took some artistic license with the facings, cuffs, and turnbacks but I thought the combination looked excellent.  In reality, looks to me like the Pennsylvania troops' brown coats were adorned with red facings, cuffs, and turnbacks but you get the idea. 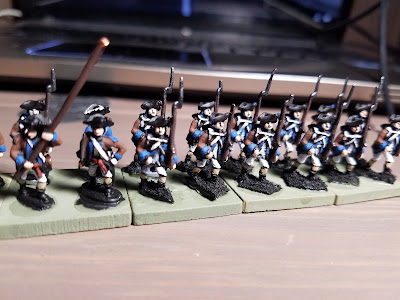 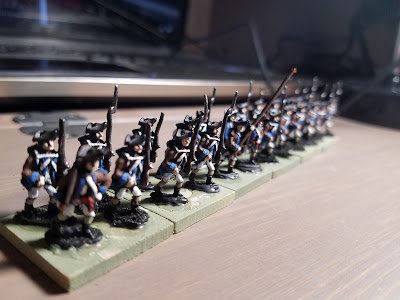 So there you have it.  Add another Regiment to the shelf!  I have to say I'm quite proud of my AWI collection and someday will have to have a "proper" game.  Next up is a Union ACW Regiment who right now just need the gunmetal and brass buttons painted on and they're ready for action.

After that we'll jump into the modern day with a Bundeswehr platoon and a US 1970s Army Infantry platoon, complete with spit-shined boots, pickle suits, and camouflage helmet covers!  Then if I have the time, I'll paint up some 15mm Napoleonic Legere because they're always fun to paint.  Stay tuned!

Did the headline get you?  Sorry, no cool sapper miniatures or games with engineer squads.  The only engineering going on here is concrete.  In my basement.  and lots of it.

After they cut into the flooring of the basement and tore off up to 36" of wall, more horrors were revealed.  The corners and the NW wall leaked so badly that the studs were rotted completely through. So naturally the project scope has changed again.  All of the wall coveringsare being replaced now.  Which is good and bad.  Good because the new walls are completely inorganic panels that will bolt onto steel studs.  Bad because they're HELLA CRAZY EXPENSIVE!

I'm keeping my chin up.  It's going to be a hell of a room to game in when all said and done.

I do have a surprise up my sleeve, however.  I smuggled 4 painting sticks worth of 15mm troops upstairs along with a case of paint that I hid under the desk.  In my spare time I will be able to get some painting done up to and including:

The basement probably won't be done until late May early June so looks like all gaming here is off for the time being.
Posted by Disgruntled Fusilier at 6:41 PM 4 comments:

The latest "hobby project" AKA basement waterproofing.  We are upgrading our existing system to move water out of our leaky basement.  This involves jackhammering up parts of the existing floor and sump and installing a new drain system, sump pit, and sump pump.  They'll top it off with a nice looking half-wall and we're going to have a tile floor installed.  Not cheap.
I get improved lighting for the gaming area out of the deal.  Which is sweet.


Anyways, I spent my nights this week dismantling the gaming empire and now our basement has been "invaded" by a waterproofing crew.  More to follow but on the bright side, this will result in a new & improved gaming area.

Needless to say painting and gaming are on hold until the basement is put back together but that doesn't mean you wont be hearing from me!  With my recent sell-off of my WH40K stuff, I was flush with cash and immediately put that back into the hobby with a HUGE moderns order.  Some TY infantry (West German), and 3D printed models from "Butlers in the UK" (sounds so formal!) and "bashytubits" here in the states.  I rounded out some TY companies from Butler's to match an earlier purchase (T-64s, BMP2s) and from Bashytubits I ordered a full company of BTR60s, T55AM2s (5 bucks per model) and BRDM AA, ATGM, and Recce.  With all of the Roskopf T-55s I have, we're talking a full BATTALION of T-55s to face off against NATO!  Whatever the rules turn out to be.

Now if only I could sell off ALL this World War II 20mm boxed stuff and get even more cash.  That might have to be at a convention.

Before I forget, there will also be some 1/100 surprises in that batch from printed order bashytubits that I can't talk about now but would much rather leave you all in suspense!  I will give you one hint, though:


Say your prayers, keep your fingers crossed, knock on wood, whatever your belief or custom is, that our basement problems are solved!  I want to get back to gaming and painting!

Posted by Disgruntled Fusilier at 8:19 AM 8 comments: