Ken and I played our first game of "Valour & Fortitude" today  - something I've been very much looking forward to doing (especially with Ken's outstanding 15mm Napoleonic figures based for LaSalle).   If you've been reading Norm's Blog, you'll remember he recently reviewed and playtested these rules, and gave an excellent accounting of his battle on his blog post here.

So what are "Valour & Fortitude?"  V&F are a set of simple Napoleonic rules from the Perry Brothers and Jervis Johnson who teamed up to design a short set of rules that could fit on 4 pages and avoids what the author calls "f**kwittery".  Click on the rules link if you want to know more! (especially what f**wittery is).  Also I should mention that the rules, army lists, and scenarios are free... 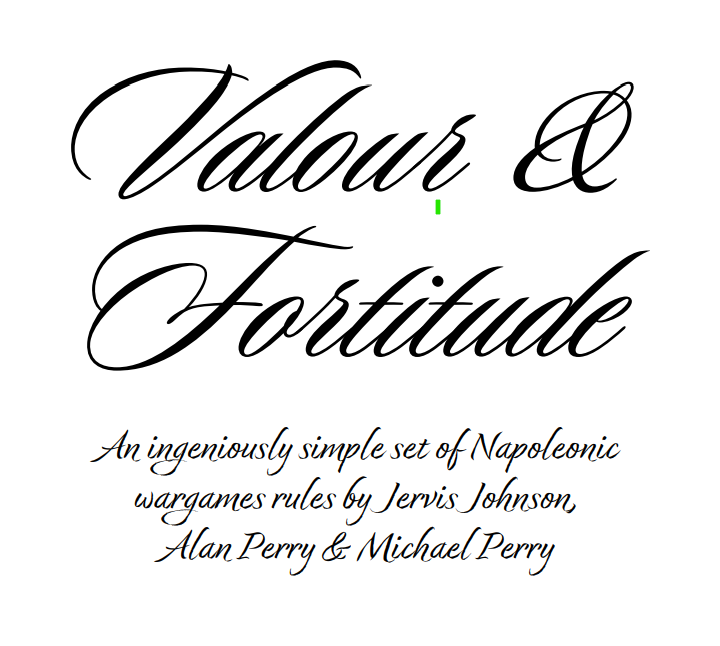 Ken and I played the "Assault" scenario today, with 100 points on the table.  This was enough for me to field 3 small French Brigades and Ken to field 3 small Austrian Brigades.  My task organization looked like this:

*understrength brigade, although I didn't know it at the time...

With Ken as the defender, he received 1 reinforcing Brigade starting on turn 2 and I had no idea what he purchased.

We diced and I ended up being the attacker.  I started with all my Brigades on the table.  The table is bisected by a river and there are 4 x objectives across the table, placed by Ken and I.  My plan is to go straight for the hilltop objective and the town objectives (the 2 x hardest).  I have a center Brigade which can go left or right, depending on the situation.  I originally opted for larger brigades, but since the minimum is 2 Battalions, I instead created another (Ken's suggestion.  This turned out to be a great idea and gave me much more tactical flexibility than I would have had with 2 larger brigades.

Ken has a Brigade of Grenadiers in the village and that's going to be a tough nut to crack but I want to learn the game and so I plan on going after it anyways!  Movement and SHooting are very generous (these rules meant for 28mm Perry figures (naturally!)

So far, so good.  Ken and I are liking the features of the rules, the "maneuver" options and not-fiddly movement rules.  I move up my artillery behind the swamp on the right to fire at the town.  The artillery fire is underwhelming and I dont score a single hit.

THe rules are subtle and slick, well thought out.  These aren't "One Hour Wargames" simple - they force you to think about your options.  The system oozes its similarities with Black Powder, but goes Black Powder one better with possibilities to act even when you fail your activation roll, and the fire phase going BEFORE activation!  Also, if you do fire, you can't "maneuver", only assault or rally.  Gone also are the "buckets of dice" and instead changed with a number of firing dice and a number of melee dice that can be added to, or taken away from.  There are also no saving throws. 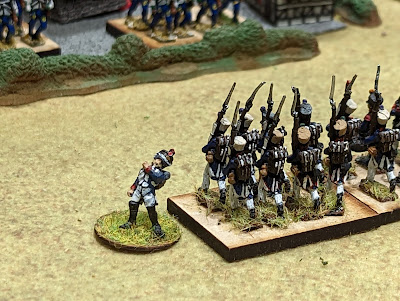 Unlike in Norm's VF game, we used the straight out of the box ranges and distances, and so units had their 12" shooting range.  It's very easy.  Roll your firing dice, score a 4+.  Units in cover don't count the first hit scored against them.  That will prove tough, especially fighting against Austrians...
On the left, the Bavarians have secured the objective but Ken's reinforcements come on - on my flank!  Ken is going for the farther objective so I'm redeploying the Bavarians to counter them.  Meanwhile, I'm setting up an assault against the town.

Ken and I fought our first melee.  At first blush, the French looked like they won because I scored 4 hits.  Ken tied me with 4 hits.  The rules state that the attacker wins ties (which is in itself pretty cool) however there is the cover rule which states that in cover you ignore a hit against you.  As Ken read through the rules, it was not immediately clear if you counted the initial hits scored, or the actual damage done to the unit (IE after the cover bonus).  The "Resolving Fights" section, 7.2, states that "to resolve a fight, carry out attacks with the active unit, then carry out attacks with the target if it is fighting back, then determine the result, and then apply losses.

By talking through this, we assumed that you count the initial, successful hits.  Meaning that Ken received the cover benefit and 1 of my hits did not count.  So Ken scored 1 more hit than me.  This also brought me to 5 hits for my French Battalion with a Tenacity of 4, meaning I'm shaken at 4 and had to take a valor test for receiving an additional hit above my Tenacity level.  The Battalion routed and left the field.


By now we hit 430pm, the time we set to end the game.  A neat and unexpected feature of this game is that you literally call when you want the game to end.  1 hour, 2 hours, 4 hours, etc.  You then calculate victory based on number of brigades you forced off the field, and objectives seized.  Ken had me sorely beaten, with 3 objectives to 1.  My brigade that assaulted the town had 2 setbacks, and was almost ready to make a Fortitude test (and I just realized my 2 x Battalion brigades were "understrength" and so were actually already wavering.

We called the game at 430pm, right on time.  Austrian victory!

I really enjoyed this game, and I think Ken did as well.  For a 4 page or 5 page rule set, there is alot of cool nuance and features in this ruleset.

I really liked the movement rules.  They are super flexible and generous (read that as not fiddly) and you can get to maneuvering your figures and fighting.

Speaking of fighting, the Austrians with the tenacity of 5 are really tough, and the Grenadiers are tougher.  I wish I would have set up supports better, and probably have gone against the town with the Bavarian brigade since it had more battalions (you can have up to 3 x supports, meaning 3 more D6 in the melee).  I enjoyed looking at this like a problem to solve and being forced to whittle down the enemy before attacking.

The fate cards were cool, but we ended up forgetting about them.  Something that will probably evolve as we get more comfortable with the rules.

I'm a bit confused about when to take certain tests and the different names but that's nothing a simple read through won't fix.  The rules are surprisingly packed full of stuff for only having a few pages of text.

It's instantly apparent to me that these rules will happily and readily support big battles with lots of battalions and units.  I imagine that's where their strength comes in - Brigades that melt away from failing a Fortitude test speed up the gameplay considerably and efficient play seems to be part of the design ethos of this game (note I did not say fast-play - but rather efficient play).

Anyways, I'd love to take some of the bigger Shako scenarios out for a spin with these rules.  Ken is convinced that the sequence of play will work for other periods and I have to agree with him.  There is alot of room for chrome and other upgrades with this system.

Is this Black Powder "Lite?" Time to deal with the gorilla in the room.  I don't think so.  I think the designers took aspects of Black Powder that were a bit more unpopular or controversial with players and made adjustments erring on the side of simplicity and/or brevity.  FIring occurs before movement.  Units in march column may act (BP2 remedies this I think) even after failing their activation roll.  Units have their own character and are not completely generic.

All in all, this is a fun game with an epic scope in a tight, 5 page package.  And for the price, you absolutely cannot beat it.

Some of you are old enough to remember times before COVID and my glorious Ponyri Station Firestorm Campaign.  Looks like I just couldn't leave "well enough" alone.  We're pushing the clock ahead 39 years to 1984... International tensions are rising to the boiling point, and while the weather is cooling off, the military situation is heating up. For those not familiar with the concept of a "Firestorm Campaign" here is some reading from the Battlefront folks. We use a campaign map to generate tabletop battles and the results matter for future battles. Players also take the role as generals and there is an overall commander who will dedicate "firestorm resources" (reinforcements) and make decisions as to where to make critical attacks.

The Ponryi Firestorm a number of years ago was what I could only describe as a wargaming adventure that, if you haven't seen, please do yourself a favor and check out the links below and follow the Firestorm Campaign tag on this blog to read about the seven week wargaming journey taking place on the northern shoulder of Kursk.

I'm brainstorming the campaign rules now and will potentially have some openings in the future for command positions. More posts to follow that will explain more details about how the campaign will go.

For those who want to join in, we don't require any particular rules, minis, or scale to be used. You can play what you want and with what you have, provided it's "Cold War" themed. The Ponyri game was a really outstanding 6 x weeks of WWII gaming goodness played across the US and the Atlantic Ocean. Looking to recreate that. So dust off those T-72 A models and Ivans in khaki uniforms.  The Soviets look ready to kick off операция осенний шторм, or operatsiya osenniy shtorm - Operation Autumn Storm. More to follow so stay tuned.

The phone rings. The nerve-wracked voice at the other end of the line has only 2 words for you....