Don't you hate it when you need a sniper figure and don't have one?  So do I.  Friday night's excellent Crossfire game duo the German player had 2 snipers as part of his force.  Pretty sweet deal if you ask me, but only using "regular" infantry figures is for the birds.

Anyways I was fishing around and found some done, done-over, and half-done plastic German battlefront figures from the Open Fire box.  Awesome!  Most of my eastern front kit is wearing standard feldgrau, so this dude in the smock or zeltbahn shelter half is literally perfect.  Granted, this was painted before the days of me reading "nordalia paint formulas" but you get the idea. 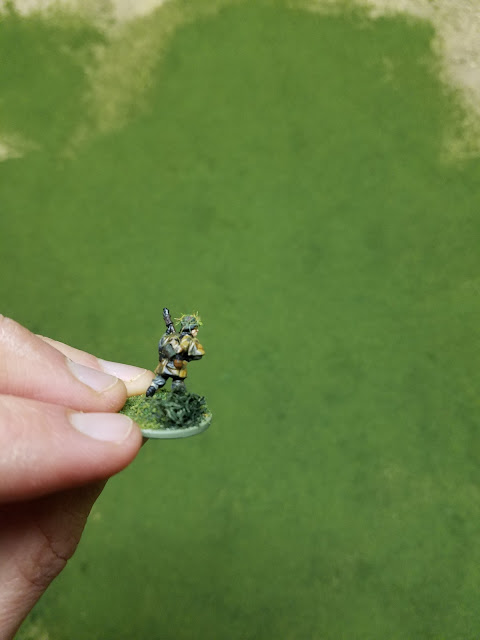 While I think it would be better to have a prone figure firing, this looks like he's running to a hide sight or beating-feet after he's been spotted. 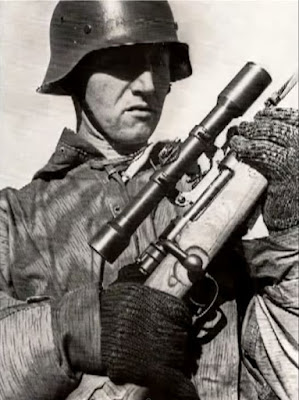 And of course, a gratuitous shot of the table below, which is now 90% done.  I added more flock to the already existing grassy shapes to give it a little more color but still retain that "parched" look of summer.  Enjoy the pic of next week's game - Neil Thomas Napoleonics already set up.  This will be a portion, or a bath-tubbed whole, of the Battle of Hanau, 1813 when the Bavarians under Wrede took on Napoleon and what was left of his forces.  This should be another quick one with 6 to 7 battalions on a side along with some artillery and cavalry for a complete battle.  Huzzah! 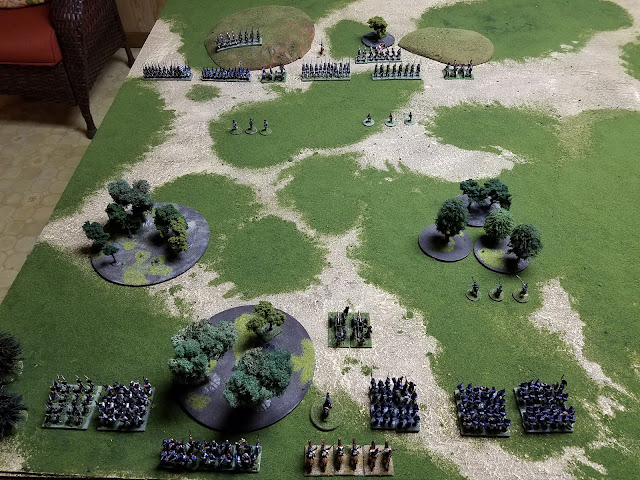 Dave came over Friday evening for some gaming and I thought it would be a great opportunity to test out a scenario from "Steven's Balagan" blog which has a ton of Crossfire (and other gaming) resources.

The scenario I planned was a small one, Steven's own "Russian Scouts" scenario which we played, originally thinking it would take the entire night.  This scenario is, I believe, inspired by the "Recon before Pontecorvo" scenario in "Hit the Dirt" and is a different scenario in that both sides have some considerably more difficult missions, rather than capture an objective or kill every living thing on the table.

The Soviets must spot German positions (so there is incentive for the Germans to remain hidden) and get to the other side of the table, while the Germans must prevent this, kill Soviets, and prevent them from spotting the main German defensive positions (the main line of resistance).  It's really an outstanding scenario but if anyone could screw something up, I can!

Dave placed his heavy weapons sections along the 2 high speed avenues of approach that both intersected at the water tower and had a clear view into most of the lower terrain features on the table.  Big trouble for the would-be Soviet player (yours truly).  They would cause lots and lots of casualties for me for this game. 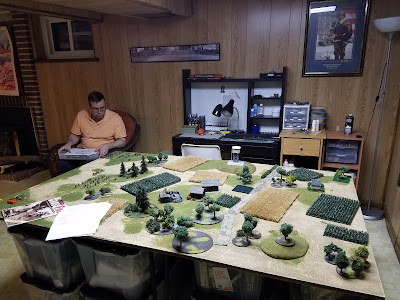 My Soviet plan is to send a large force up the right and a smaller force skirting the collective farm on the left.  Dave has a platoon in the collective farm who cut into my flank but luckily I left an HMG section at the line of departure and they spoil Dave's initial plan but he has quite a few more aces up his sleeve as i'm to find out...

Dave also skillfully makes use of Reactive Fire by allowing my first squad to reach their destination before opening fire on the second squad as it moves.  He did this throughout the game to good effect and it scatters my platoons.

By this time in the game, Dave still has 2 platoons out there "somewhere" and I'm nowhere closer to spotting the bunker or the positions.  Additionally, I've got numerous squads down and in big trouble.  Meanwhile Dave's HMG barrels are red hot!


The Soviet FO sneaks up into position and starts calling in the 82mm mortars onto the German HMGs at the water tower but they don't hit anything.


We counted up the victory points in the scenario and Dave wins by a whopping 42 points to my mere 8 points.  I moved no single squads off the board, spotted zero German positions, and pretty much lost every squad I had, save for one and some support stands.  I had a blast!!!


The Russian scouts scenario was over so fast, we decided to try another Crossfire game, using the exact same forces but using "Mac's Missions V2 Revised Pick Up Games for Crossfire"

I have to say that this game was a TON of fun.  I drew the "dig in" mission order, and Dave drew the "advance" mission order - PERFECT!  We ended up switch the starting positions 90 degrees.
My plan is to draw Dave  in then launch brutal counterattacks.  I get victory points for having people still alive in my rear area.  Dave needs to have people in the Soviet rear area for victory points.


Things get "stuck in" on the Soviet left and a big firefight breaks out.  Dave's HMG gets suppressed and his Company Commander, under brutal fire, moves all the way over to the German right flank to rally them.  It's crazy and epic!  I pin or suppress the CC, then he rallies, then he's pinned, you get the idea.  This is the stuff of movies! 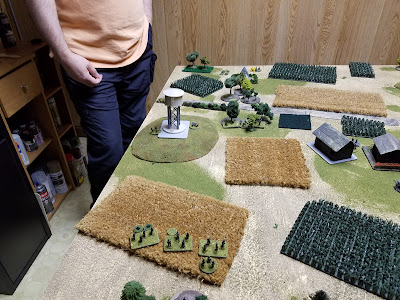 Anyways, with the attached HMG, things eventually go Dave's way and my left platoon is KO'd.  My mortar FO can't get into a good position to bring down fire and Dave can advance pretty much unimpeded.

Dave launches a significant attack into the Soviet rear area on my left his right but since I have no flank guard, what's standing in his way?  my mortar section, an HMG section, and the company command stand.....all of whom have a really rough time fighting as they're overrun.

The kommissar gets on the radio and promised Ivanovsky, the company commander, that if he can hold off the German blitz long enough, he'll arrange for a commuted sentence at his court martial, and if he can actually kill a German squad in Close Combat, the Order of Lenin!

Ivanovsky is killed quickly as his command post is overrun by screaming Germans.  A sharp firefight breaks out and the pick up games' turn clock hits 70 and that's a wrap.  David counts up his points and I count up mine.  David's assault ripped through my rear area and he scores a total of 36 points to my Soviet 38 points (Soviet platoons are more expensive than German ones in the Crossfire rulebook - which is silly in this instance because David's force was clearly successful but Soviet platoons have 4 squads to the German 3). 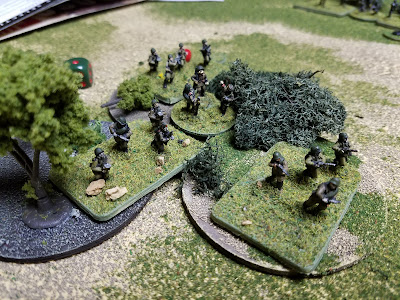 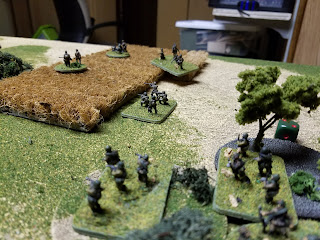 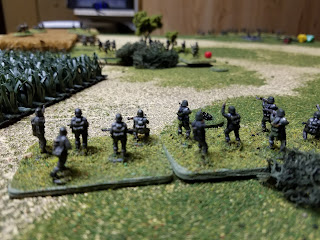 THOUGHTS
Anyone who reads my blog knows how much I absolutely love CROSSFIRE.  It's one of the few games that captures the tension, and see saw action of a close up infantry fight  I'm keen to try Steven's Armor rules which enhance Crossfire's suitability for bigger battles.

From these 2 games, one feature I loved was the moving clock.  So whenever the Germans won the initiative in the first game, we rolled a D6 and on a 4+ the time advanced 30 minutes.  We started at 0300 hours, and ended at 0830 hours.  So the time clock adds some considerable tension.  For the pick up game from "Mac's Missions" we used the D6 roll at the end of each initiative and when we reached 70 from the rolls, the game ends.

The idea that there is a variable ending and you never know when it's going to be, but you have a rough idea, is a really exciting feature that adds a new consideration and tension to Crossfire battles.

Even though I lost the recon scenario and probably shouldn't have won the Pick Up game, I still had a blast and I suspect Dave did as well.

Crossfire also scores big points for simplicity as we consulted the rules literally twice the whole game and used the QRS maybe a handful of times.

I will continue to play Crossfire games and continue to build up my forces and terrain to play more Crossfire battles.  A great and exciting set of games for Friday night gaming!  Mission Accomplished!

Posted by Disgruntled Fusilier at 10:25 AM 12 comments:

1 of 2 highly anticipated gaming packages arms shipments has arrived at SOC Headquarters this week.  First up was my order from Butler's Printed Models in the UK.  I first learned of BPM via facebook (AKA a necessary evil) but have not actually known anyone in the continental US who has purchased from them.

I was very impressed at the efficiency of the packaging and the manner in which the models fit into the tiny box.  Granted they're still on the sprues with lots of flash, but it's an impressive feat none-the-less.

First of all let me say that I bought a 3D printed terrain bit for EPIC 40k a long time ago and it was flimsy, and generally crappy.  My fear was that these models would be the same way.  NOT SO.  There is considerable "heft" to them off the bat for a printed model.  Granted, the main guns will most likely not survive a 4' drop so be careful, but still, they not not flimsy models at all. 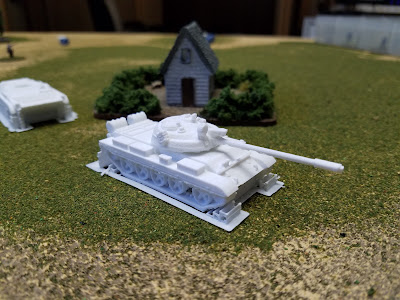 Overall verdict for the T-55?  I will buy more of them.  Even though I have a shed-load of Rosktopf T-55s, perhaps I will have enough for both Arab armies and Pact armies? 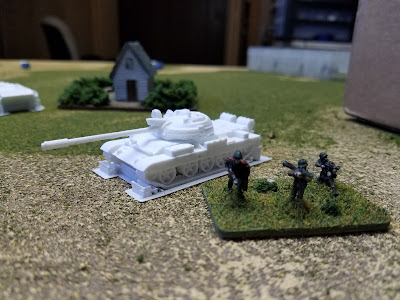 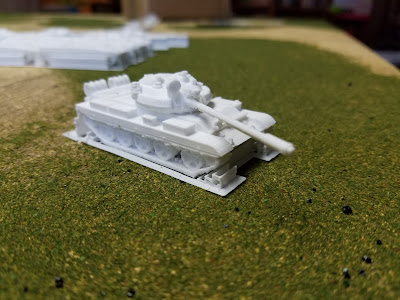 Next up are the BMP2s which seem as if they are perfectly scaled next to their Battlefront cousins.  I am SUPER pleased with the quality of the BMP2s.  They won't look right sitting next to my quality castings models but they don't have to be in the same unit I suppose. 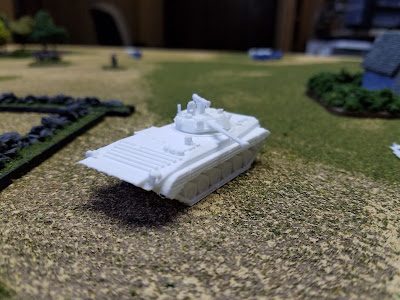 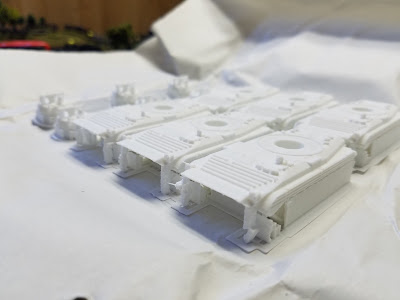 Okay and naturally I saved the best for last.  The T-64.  This is a beautiful model and looks great on the table.  I cannot wait to paint these up.  Not sure how they will look next to my T-80s from quality casting but they had better be prepared to do "double duty" on the tabletop.

I suppose this means I'll be buying the Soviet Army book for Team Yankee when it comes out?? 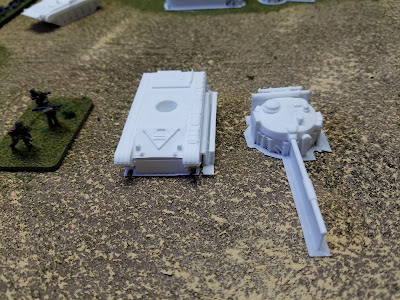 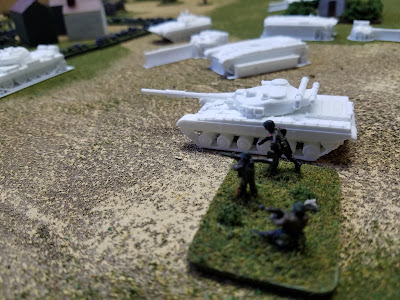 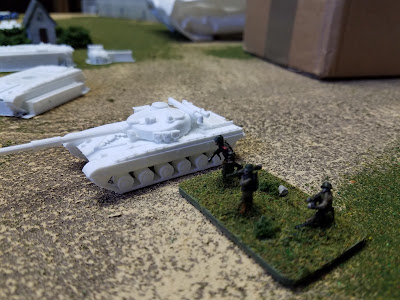 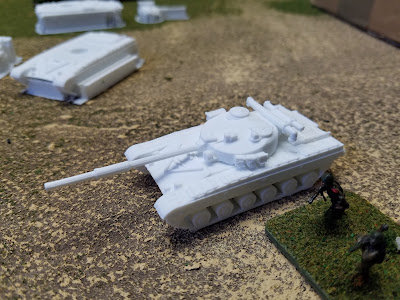 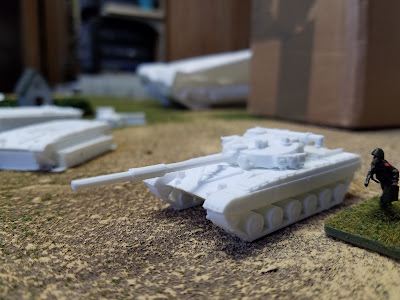 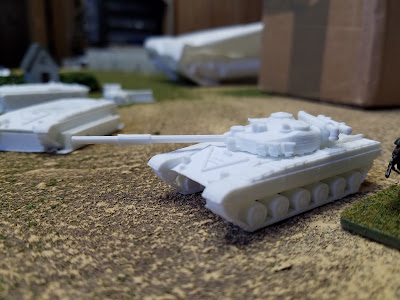 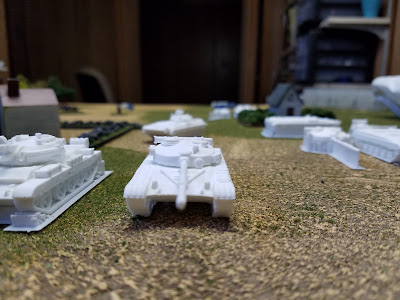 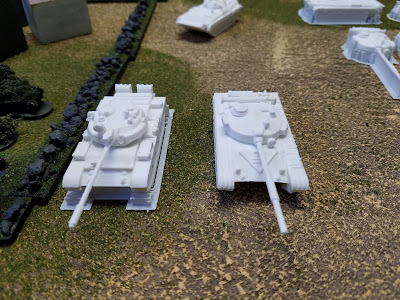 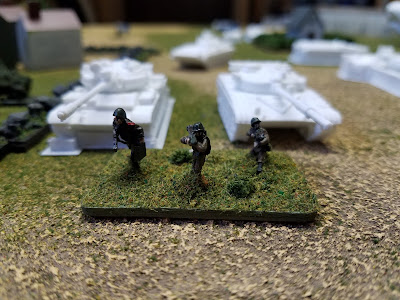 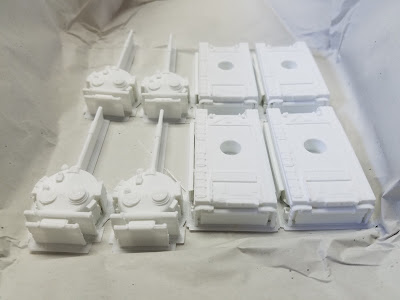 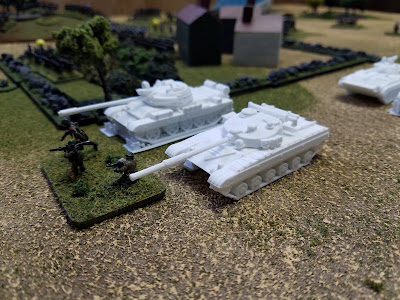 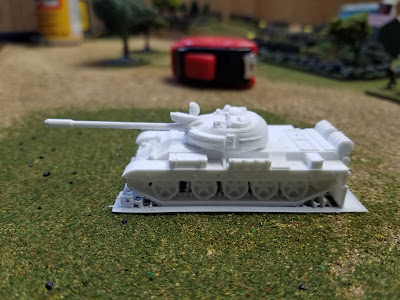 So that's it.  I'm very impressed with the quality of these models and I'm very happy with my purchase.

While not very cost effective due to shipping (14 Pounds!), the current pound-dollar exchange rate is what drove me to purchase these.  I'd been waiting for the right opportunity and figured i'd jump at the chance to finally buy.  There are some great WWII and Post War models on the BPM site as well and I urge you to check them out.  https://www.butlersprintedmodels.co.uk/

Next package is a set of Crescent Root European buildings!  Watch This Space!

And after these 2 purchases, I'm pretty much tapped out for the quarter...Besides, I've got loads of painting to do anyways.

Speaking of which, can I paint these babies with a rattle can?  Or will they melt?

Posted by Disgruntled Fusilier at 11:03 AM 12 comments: