An enduring crackle of static pierced the air as the Hauptsturmfuhrer attempted to raise what remained of their Division's vangaurd.  He took a deep breath, keyed the throatmike, and spoke to the company:

ALL NOAK ELEMENTS PREPARE FOR ACTION - BOLSHEVIK COUNTERATTACK IS IMMINENT.

He was automatically transmitting orders even though he could barely focus.  The company was exhausted, but their mission, a series of ridgelines in front of the Division's area, loomed.  They had just barely captured Hill 252 and aerial recon was reporting huge columns of Soviet armor and troops approaching from the north east.  To make matters worse, the Tigers, so crucial in the last battle, had pulled out.  Division pulled them back to deal with counterattacks in another sector.  "So much for the plan."  the Captain thought.  He surveyed the ground in front of their position.  The company defensive position was anchored on a small farm on their left in front of a huge wheatfield.  On the right, hill 252, if you could call it a hill, anchored the right.  The captain took up position where he was for the last fight.  Scores of burning hulks littered the ground in front of them.  "It's just another day in Soviet Russia."

Dave and I pick almost the same course of action that was picked in the previous battle, with my infantry moving up and occupying the village.  Dave pushed his tanks along the same avenue that Ken took.  Dave moved them up to the hedgeline and decided to try and winkle the my infantry out with MG fire and HE fire.

We didn't use the Tigers or the KVs for the second game, instead putting more of our standard armor in reserve.  For me that meant 2 platoons of my vital long-barrel panzer IVs.  Dave has a company + of T-34s in reserve who are also racing their way to the front!

Infantry pick their way through the wheatfield, scrub, and woods to their front.  The sounds of battle becoming louder now, but no one in the ranks knows what's happening.  They can hear the roar of tank guns, artillery, and machine guns.  The smell of cordite hangs in the air. 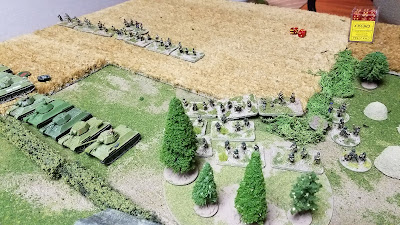 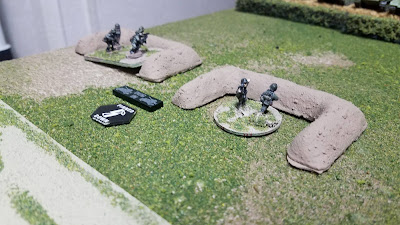 The woods in front of the Soviets explode as artillery lands amongst the men charging the village.  The fascist vipers are murdering them wholesale.  The only way to stay alive is to keep moving forward! 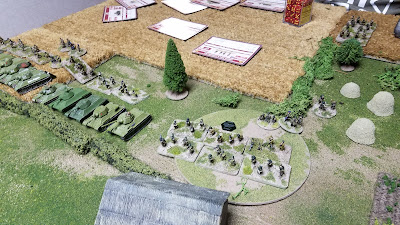 Noak's panzers speed west towards the beleaguered infantry.  Unlike the last game, there are only 5 panzers on the table! 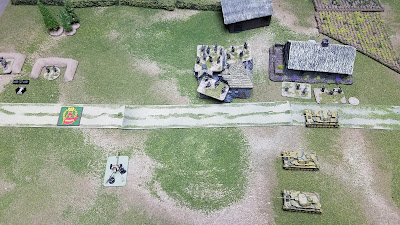 Dave unpins his men and surges forward.  Even amid the carnage, he still has enough troops to capture the first building in the collective farm!  The Soviets burst in and fire rounds into all of the stunned and wounded panzergrenadiers. 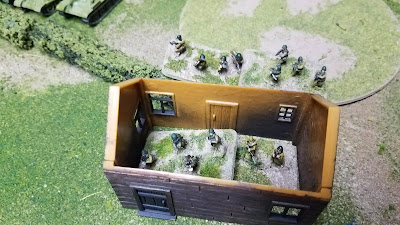 The second platoon is getting whittled down and will spend most of the battle pinned.


Dave gets a reserve roll and moves his T-34s onto the table.  My goose is cooked.  He charges down the road, hub to hub FOW style! 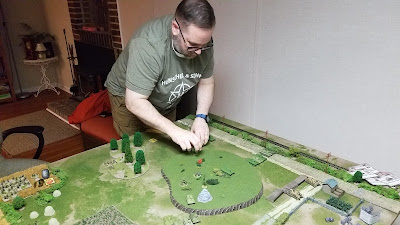 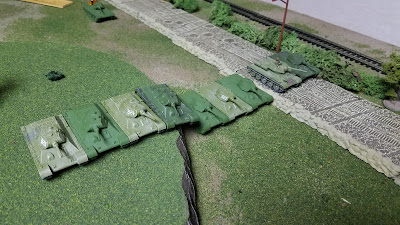 Not wanting to halt the momentum of the attack, the Soviet infantry, in a frenzy now, charge the second building in the farm!  It's the company's machine gun platoon and they're already pinned and hurt from a previous artillery strike.


Eventually, Dave kills my command Panzer IVs on the right objective with massed T-34 shots.  The battle has ended with 1st LSSAH Division Vanguard a shell of its former self, as the infantry run for it.  The battle ends with small elements of both platoons escaping south before the "cossack" T-60 tanks can run them down.  All of the armor on the field has been destroyed and Hill 252 is back in Soviet hands. 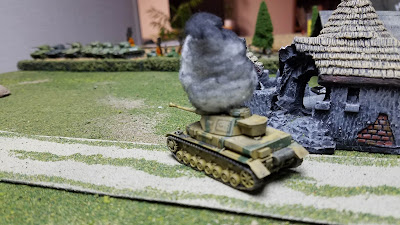 Hill 252 - Historical Flames of War Part I of II

An epic Black Friday yesterday as Ken, and then Dave, came over to play a HUGE historical Flames of War game.  (huge for my table, anyways).  The scenario was straight from the Battlegroup: Kursk rulebook (yes, you read that right) and the forces were roughly the same.  We played the "first charge at hill 252" game.  This represented some of the action from the 32nd Guards Tank Brigade fighting against elements of the 1st SS Panzer Division for Hill 252.

In FoW speak, the forces totaled a whopping 234 points!  The Soviets had a full tank brigade consisting of 2 x tank battalions and an infantry battalion.  The Germans had a Panzer IV long-barrel company, a tiger platoon, and a PanzerGrenadier company.  Oddly enough, Hill 252 didn't prominently feature into the fighting... 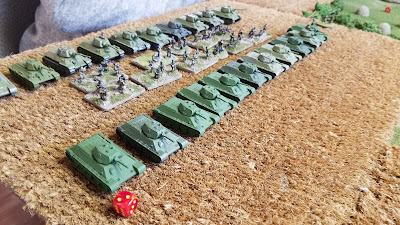 In my rules it did not say that my infantry could start dug in for a hasty attack scenario.  So my infantry are in shallow rifle pits looking for cover!

My armor is watching hill 252 as I'm thinking that's the natural course for armor to come through.  Ken begs to differ!  The Hasty Attack scenario allows Ken to wait for me to deploy my stuff guarding the objectives, then he can remove an objective and deploy his stuff however he likes.  Historically, the Soviets had aerial recce during this fight anyways! 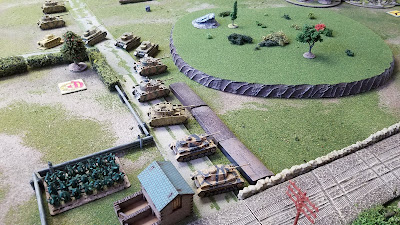 Ken's attack surges forward against my weakly-held left with no armor to face him down!  This is gonna be a jail break!

A good number of Ken's tanks get through and he assaults the first platoon.  They fight down to the platoon leader and platoon sergeant!  Who end up being killed in a second round of close assault.  They manage to bail a T-34 in the fighting.

I start taking accurate tank fire from the objective already.  I race a tank ahead to ensure the objective is still contested but Ken's shooting is intense.  I need to position my ambush.  (a platoon of PAK-40s in ambush which I've been keeping in case Ken's SECOND BATTALION appears somewhere!  Double Scheisse!) 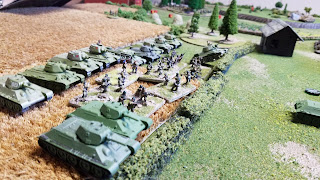 Turn 4 Ken's reinforcements, the first of them, show,  A heavy KV-1 company!  They show up on the road poised to assault the right objective south of Hill 252.

Ken's infantry burst across the hedge and attempt to assault the town but my panzergrenadiers have a ROF of 3 and they're beaten back from defensive fire! 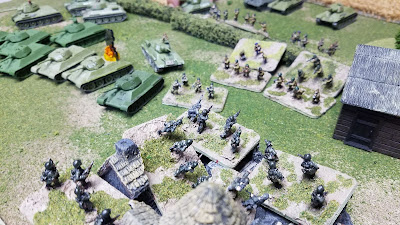 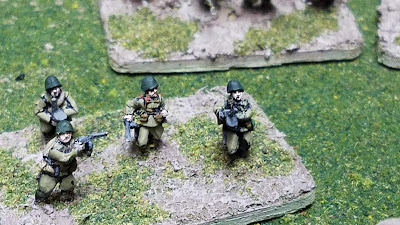 My PAK 40 ambush is put-in and starts reaping a a harvest against the T-34s.  I feel like I'm hanging on by my fingernails on the left!  Then the Tigers show up....

I should note that with the "Iron Cross / Enemy at the Gates" supplements, there are very few things that can kill the beast and I have 3 of them in 2 x separate platoons. 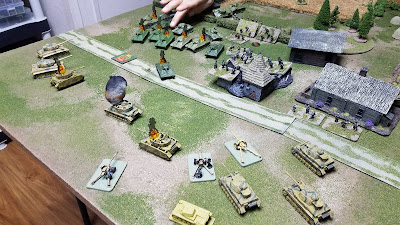 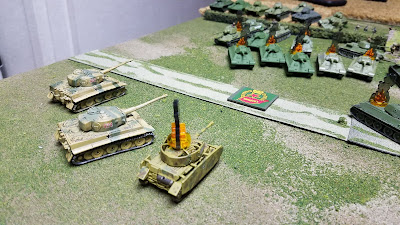 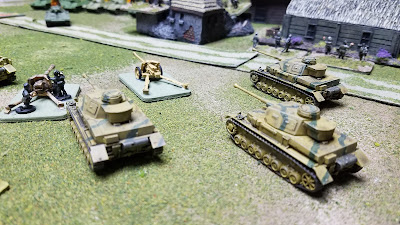 Ken launches his second T-34 company against the objective and the Tigers, hoping to swarm them.
The left objective becomes a graveyard! 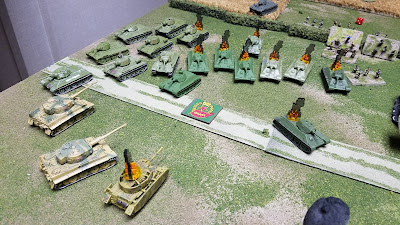 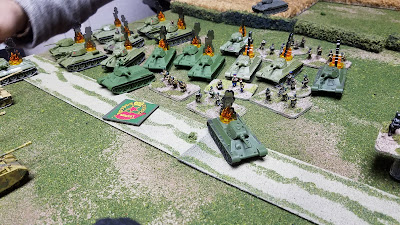 Ken's other infantry company on his left surges forward and moves toward the village.  It's around this time that he receives his last T-34 company.  He places them oriented towards Hill 252. 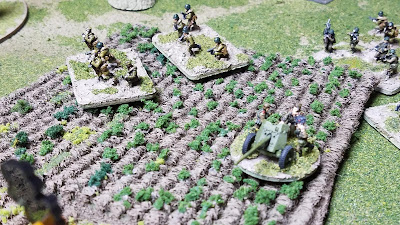 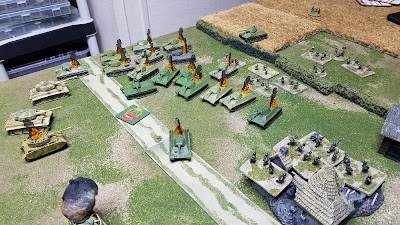 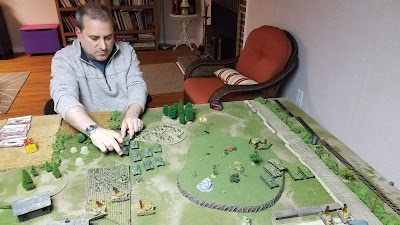 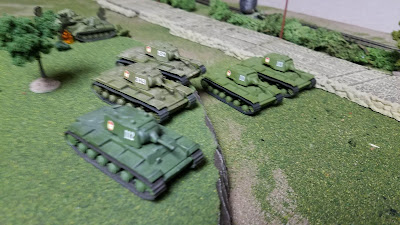 Ken's KV-1s are within eye shot of the objective on the right.  Good rolling and my final Tiger shows up and rolls over to sit on the objective.  The KV-1s cannot penetrate the armor the best they can hope for is a bail. 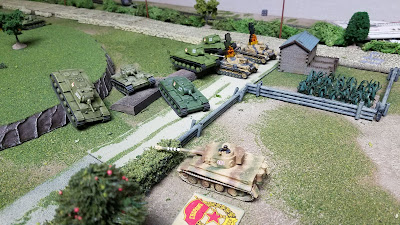 The lone tiger arrives from the march and goes right into battle.  2 x burning Mk IVs on his right, he can see that this flank is in trouble!  KV-1s approach from all directions and it's looking grim! 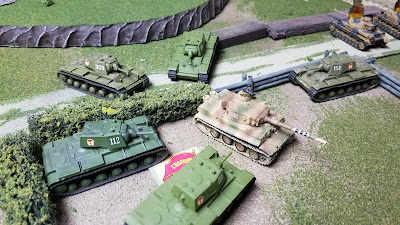 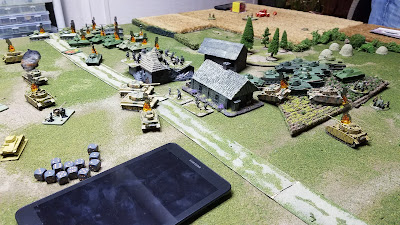 Ken manages to bail my Tiger on the right.  If I can't remount them I'm toast!  It's a one vehicle platoon! 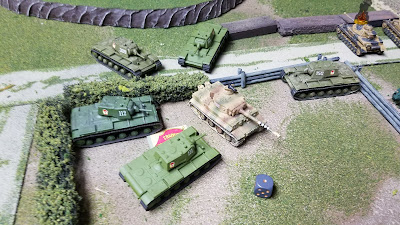 At this point we called the game.  With Tigers firmly ensconced on both objectives, it would be almost impossible for Ken to dislodge me and he calls the attack off.  This was a nail biter for me as the Germans. 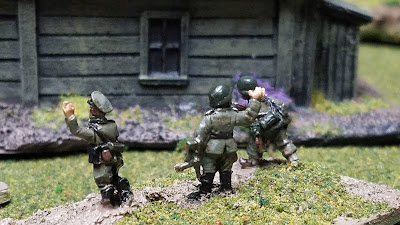 The best part about yesterday I have to say was getting to hang out with Ken and then with Dave when we refought the whole battle.  Great time and a great way to spend "black friday" with an epic day of gaming.

Part 2 of the battle will be the Soviet attack part II.  We used slightly reduced forces (no Tigers and no KV-1s) and had another go at Hill 252.  So you could say the Germans are consolidating their defenses and know that with daybreak, Ivan will be back in force!  Thanks for reading!  Part II tomorrow! 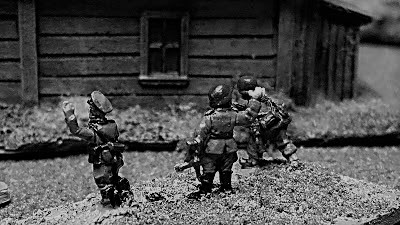 Posted by Disgruntled Fusilier at 8:36 AM 4 comments: