We played a quick few turns of Great Escape Games' "Seven Days to the River Rhine" (7D) on Friday night and I took a few pictures to blog about the adventure before calling it a night.  Much like me, Ken was pretty tired on Friday after work so we agreed to play a couple turns to see how the game worked. 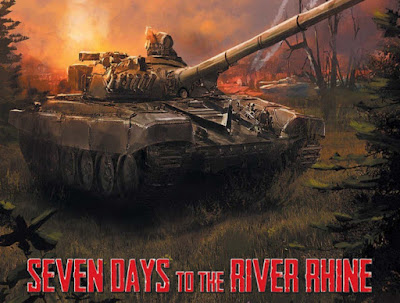 I brought my signature 1/100 West Germans, consisting of Roskopf models, Battlefront and Command Decision infantry, and a few other makes, versus Ken's Battlefront Soviets.  We played the capture scenario, or at least up to turn 3

Ken splits the motor rifle company and sent them down 2 approaches, both mounted on the roads to make the most use of the "rapid road move" mobility.  My Marder in the town, along with an ATGM team and infantry squad defend up but I cannot get a bead on Ken's troops, who occupy a small gasthaus before the town that makes an excellent support-by-fire position.

I eventually get a shot off from the Milan team in the house (I know, bad move) against the lead BTR, killing it.  Ken is still able to move 2 squads up into the gasthaus before the town.  I take a morale marker for firing the Milan inside a building!  It's a cool feature of the rules


on the German left, the Soviets move down the highway at speed.  The Milan fails to react to them.  During my turn, the infantry squad takes a shot with their law from the warehouse and also misses!  Damn TA troops! 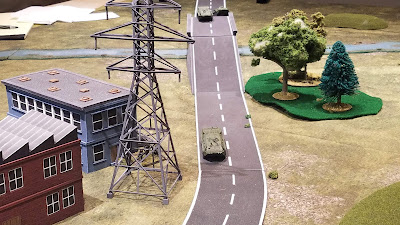 Some sustained firing sees off an infantry squad on the right who execute a fall back order and lose D6 morale markers when withdrawing (another cool feature of 7D).  During my turn, I activate a marder, move it out and finish the squad off in the open with the auto-cannon.  Stuff is dying left and right!  Then i spend another command token and move them back into cover.


on the left, my Leo in the hide position emerges and knocks out the BTR moving down the road.  Pressing my luck, I move him further up and engage the second BTR and knock it out!  The action is heating up now! 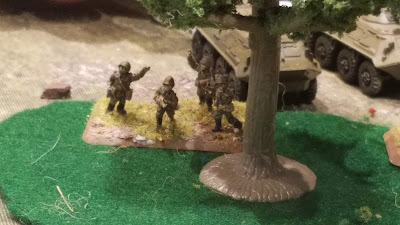 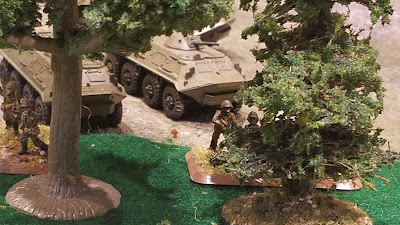 At this point it was 830pm.  I cant speak for Ken, but I'd been up since 430 and I was plenty exhausted so we called it a night.  I left my minis at Ken's house to play more 7 Days!  What a great game.

Thoughts
This was the first time playing for both of us and while we had questions we eventually got the hang of things.  This game was full of excitement and the mechanisms that work so well in Iron Cross work just as well for Cold War.  The engagement system is slightly different as units have an organic
"to hit" value, meaning they must achieve their modified To Hit number to hit an enemy unit.  Weapon systems are pretty lethal also  which makes this feel just like Cold War combat - if it can be seen, it can be hit.  If it can be hit, it can be killed.

We did not make use of the cards, yet but that's coming.  I like how this game keeps you on your feet, constantly guessing, making decisions, and still having to conserve resources.  If you run out of tokens, your enemy can run circles around you.  The game gives you enough flexibility and just enough control to be able to fight your plan and I love it.  I would like to try this with MicroArmor and I have an idea for tokens and morale markers that is crazy enough it just might work.

Cant wait to play this again!  I am going into a week of "stay-cation" and so I just might have to paint and game more this coming week.  Huzzah!  I dont know why, but I have a hankering to play BattleCry with my 15mm troops.  Stay tuned.

Ken and I originally planned on playing Seven Days to the River Rhine on Saturday but instead chose to play another game of IRON CROSS since everything was set up.  Again, we used Ken's magnificent 20mm kit on his 6 x 8 table.


We played the same mission from last game, the "Capture" mission.  This time, however, the battle took place on the Eastern Front.  Ken took the Soviets and I played the dastardly Germans.  Point differences were roughly 800 to 400 in favor of the attacking Soviets.  I did get hidden units, though.

My force was a platoon of 4 x rifle sections, 4 x machine gun teams, and a Panzer platoon of 2 x Panzer IV's and a single Panther.  Ken's force was, well I can't remember specifics just that it was huge.  Lots of tanks, lots of troops, and lots of support weapons.


Ken will have to slog the long way up the table across a deadly killing field.  Unlike Ken's strategy from last time, I defended further back with no Germans on the Soviet side of the river.  I wanted to use the space to try and kill units as they approached.  Ken has multiple units of infantry and armor in reserve.  He starts moving towards the woods on his right and my MGs open up, knocking out a squad in the opening turn of the game.  There are many more where those guys came from!


I activate a Panzer IV in the small woods next to the bridge and open fire on Ken's advancing armor (SU-76's).  I hit but fail to kill.  Ken's return fire is brutally effective and he kills my Panzer IV!  As his infantry advance south of the village, I fire down the lane and kill a squad.  Ken uses the SU-76 to suppress my MG team in the woods.  I also reveal the rifle section in the woods.  The key terrain in this fight is becoming apparent! 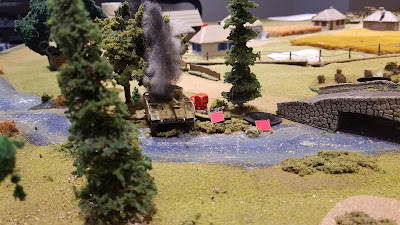 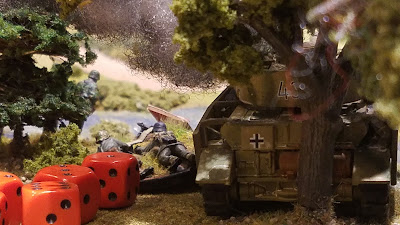 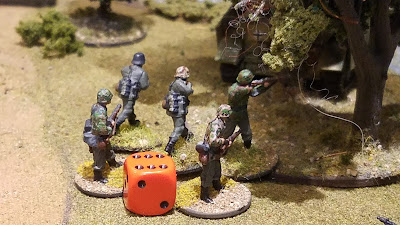 Ken moves a recce platoon of T-70s around his right past the woods where I reveal another waiting Panzer IV.  My Panzer IV fails to kill a single T-70, causing 2 x morale markers on one. 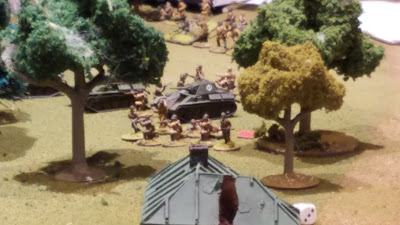 More of Ken's reinforcing armor comes on the table now.  Bigger tanks.  Bigger guns including a "beastkiller" SU-152 and an SU-85 Tank Destroyer.  We're playing 7 turns and it's around 4 now and Ken needs to get his troops on the move. 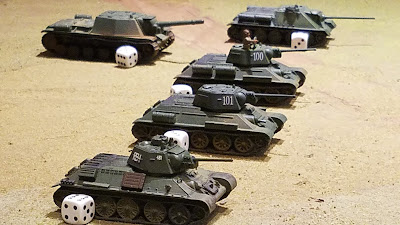 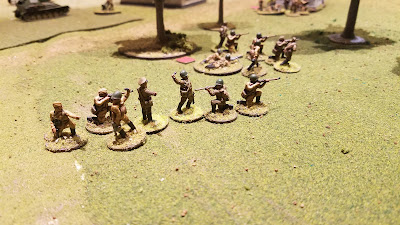 Ken's men are clawing their way through the village now.  The "red house" as we referred to it, the one with the red roof, becomes more key terrain as it's cover for troops looking to support the bridge crossing.

I have no choice but to reveal the Panther and the remaining units in the village.  I move up the Panther and begin shooting but fail to hit a single target.  In fact the Panther killed nothing the entire battle!  Additionally, none of the Panzers killed a single Soviet tank. 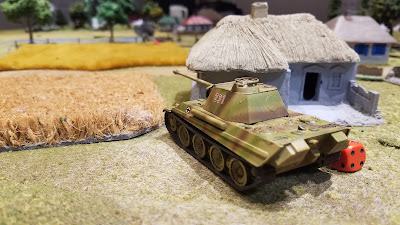 Ken organizes a serious push to take the bridge and the objective.  He surges his armor and infantry forward, eventually moving a T-34 up to the bridge.  I should note that all of my infantry have hand-held anti tank weapons with a range of 8"!  I knock out his T-34 somewhat easily with it.  Next, Ken moves his infantry up and they get pushed back by machine gun fire.  Ken starts focusing his fire on the MG and the Rifles on the right of the bridge and he pushes them back!  The back and forth nature of the combat in IRON CROSS is very exciting and, to me, feels very realistic.  The whole game feels like a firefight. 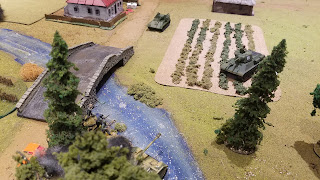 We treat the KO'd T-34 as difficult terrain but Ken easily passes the check and moves his SU-85 past it to cross onto my side of the river.  Ken needs to kill a single remaining infantry squad within 12" of the objective.  If he does, he takes the game.  He moves more armor, MG, and infantry into position to cover the advance. 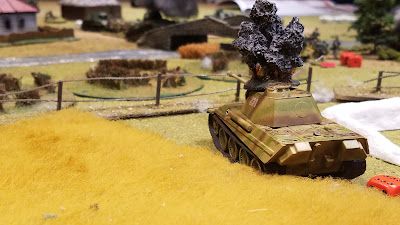 Ken gets another infantry squad onto my side of the river and into the swamp onto the objective.  He eventually kills the infantry squad i have overlooking the bridge and that was the game. 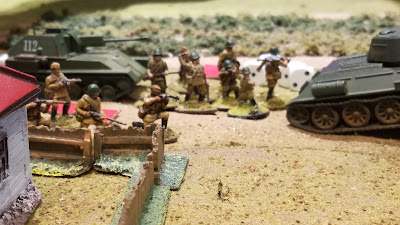 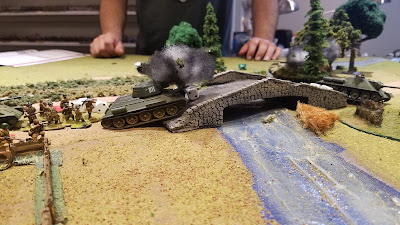 This game came down to the very end of turn 7 but was a solid, Soviet victory.  Very enjoyable and lots of back and forth action.  I like that you can force the enemy to react to your plans by spending your command tokens aggressively.  I also like that you can plan an effective defense and spread your activations out among fresh units covering an objective.  To me, this game has you thinking like a commander, not just as a gamer.  You need support weapons covering the advance of your troops in order to suppress enemy defenders.  You also need a reserve to commit at an opportune time.  The game rewards good planning, keeping a reserve, and trying to maintain the tempo of operations over your opponent, kind of like real war.  The "tech" is much less important in this game and I'm okay with that.  IRON CROSS is quickly becoming one of my favorite WWII games.

This was a great game and I cannot wait to play IRON CROSS again, or try out SEVEN DAYS TO THE RIVER RHINE, which is the "Cold War" version of IRON CROSS.  I also purchased "1914" in the hopes of playing the WW I variant.  Ken and I were musing that the activation system would port well to other eras of history and I agree with him.  Also - one more week until "stay-cation '19" and I am already planning out my hobby projects!  Until then!

PS Thanks to Ken for gifting to me 2 x 1/72 armor kits and a box of 20mm infantry.  Inside story here - I literally sold off my entire 20mm collection at 2 conventions.  Yesterday's game dropped me right back into it all!  Guess I had better get started painting!
Posted by Disgruntled Fusilier at 2:19 PM 8 comments: