Dave was over to take part in an epic Waterloo game of Commands & Colors: Napoleonics on this Father's Day.  We played the straight-up Waterloo scenario from the original box with no Prussians or other Allied trickery. 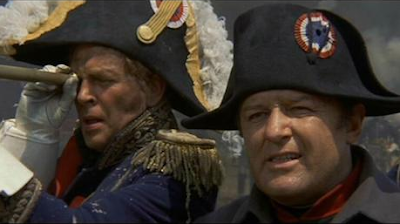 The game features about 20 units per side with the British split at about 50% allied forces including Brunsickers, Hanoverians, and Dutch-Belgians, who all fight like Portuguese.  Each of us has 6 cards and we played with 2 tactics cards each to start.

We drew to determine sides.  As fate would have it, I was Rod Steiger, er, Napoleon, and Dave was Wellington.  None of this is surprising to me, who always seems to play hammer/anvil/horde armies.  Although this time around, the French turned out to be surprisingly good.  I forgot how good considering I've literally only ever played the French side ONCE in CCN.  I normally play against them.

I feel as if looking at the map, the critical attacks must fall against the allied flanks where the preponderance of allied units are posted (read that as attack the Non-British units).  I will only launch an assault against the center if the flank attacks break down and I have no other alternative.  Picton and his braggarts, thieves, and b**tards are holding the central ridgeline positions and have lots of artillery backing them up.  The flanks are soft and chewy, with only 1 British unit apiece there.  Plus I get extra banners for capturing Hougoumont, and Papelotte. 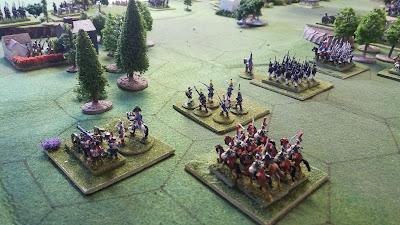 The action begins on the left where I send in my line and light troops against Hougoumont.  British lights are there holding.  Unfortunately they have bad fields of fire and their firepower advantage cannot be completely brought to bear due to the woods.  It's here I launch my first assault.


I end up moving some units from the center to reinforce the attacks on my left/British right.  While I overrun Hougoumont, it won't be that easy to hold.  Dave changes tactics and sends the Grenadier Guards down to counter attack.  They capture the complex and more British infantry drive my French away!

I was kind of taken aback by how good the French units are.  Again, I've only played the French once but they're monsters in the attack. 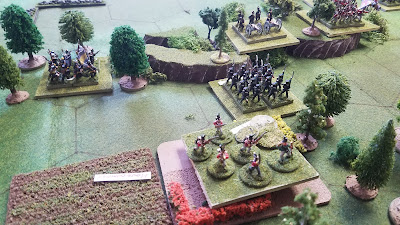 Eventually a ground assault goes in both against Papellotte and Hougoumont and both are captured with the destruction of both units there.  A whopping 4 x victory banners earned in one turn.  I start to realize Dave doesn't have alot of flank cards and I have mostly flank cards.

On both flanks, Dave sends his cavalry down to make spoiling attacks against my infantry. 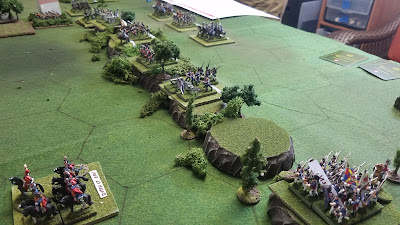 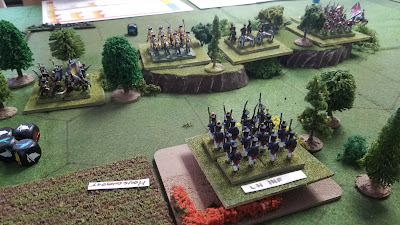 I move General Reille into Hougoumont to help rally my infantry but it's too little, too late as the Guards begin their counter attack.  Naturally, Reille is killed!  The highest ranking officer of the battle killed today.

Dave committing the British on my left changes the equation.  He gains 2 banners for the destruction of my infantry and of General Reille.  The state of my forces on the left will not recover from his rampage, either.  I move in another infantry unit and a Cuirassier unit to try and stabilize the front but Hougoumont will belong to the British for the rest of the battle.  I'm OUT of cards for the left flank and don't get any more!  Merde!


My light cavalry on the right flank move out to greet the Dutch cavalry and a sweeping battle breaks out near Papellotte.
I go through a few turns with only 1 banner needed for victory.  I get my chance on the right flank and launch infantry against the ridge with Dave's battered Dutch holding on.  I'd like to turn Picton's Division's flank if I can.

And that's it.  That's 8 victory banners to the French.  This battle was fun but admittedly it took Dave and I a few turns to come back to CCN as it's been awhile since we played.  Still though I love the fog of war brought on by the cards, and the ability to take advantage of opportunities as they arise.  This game was about 2.5 hours and perfect for a Sunday afternoon.  I also enjoyed the use of the 15mm troopers and will not get rid of mine like previously thought.  Kooking forward to playing CCN again.  Perhaps we'll start a Peninsular campaign with the 15s?


Posted by Disgruntled Fusilier at 6:05 PM