Work continues apace on the Germantown MEGAGAME project!  Having set up the table to find out how the scale looked and worked, it's time to put pen to paper and figure out how to recreate this epic battle on the tabletop.

Yesterday after work, I took to setting up the table on a hex mat to see how it looked and "felt" using about 200 yards per hex.  As it turns out, this scale worked remarkably well and in the practice game I played "felt" right.

I thought at length about some special rules and extra considerations for gaming Germantown.  So in my opinion, no game of this battle would be complete without the following at least:

The fog.  The fog wreaked havoc on the execution of Washington's plan and for at least the first 4 turns, there will be fog rules in effect (more on this below).

Sluggish British Divisions.  The British, if not for their advanced picketts and light detachments warning them with fire, would have been doomed and caught unawares by Washington's attack.  The main body of the British force was encamped south of Germantown proper on higher elevation.  It took some time to rouse them from their camps, form up, and march off.

Command rules and exceptions.  The light detachments are FAR forward of the main body and they do not have command stands with them.  Many rules require units to be in command or suffer penalties.  In this case, these units were hand-picked and their officers and NCOs were experienced fighters who demonstrated initiative and tenacity.

Reinforcement schedule and American column arrival.  The Americans are all over the place trying to execute an overly complicated plan.  While the arrivals will not be random, staggering the arrivals for the formations so the battle makes sense is at least important.  Everyone arriving at the same moment is not historically what happened.  Staggering column arrivals also adds an element of uncertainty and tension.

1. The Fog.  The following rules for fog are in effect until after turn 5.

No artillery may fire until after turn 5.

Columns only move 2 hexes on roads.  Columns on roads do NOT get an extra hex of movement.

No British main body units (left division, center division, right division) may move or do anything except change formation until Turn 4.  Leaders may move normally.

3. Victory Conditions and Endgame.  The Americans must capture the Market Square and must have a unit on any of the hills south of Germantown NLT turn 20.

4. Reinforcement Schedule and American Arrival.  No American units start on the table.

Turn 1.  Sullivan and Greene arrive on the battlefield all units in column on their respective roads.  Washington and Knox's artillery arrive with one of them.

Turn 8.  Stirling arrives with his column.  British and Hessian Grenadiers arrive on the battlefield.

*note - from my playtest of the first 8 to 10 turns last night, this arrival schedule made most sense given that the East-West axis is a bit constricted.  Smallwood and Armstrong would have arrived a wee bit earlier, and if playing on a 6 x 6 table that would make sense.  Also playing it this way saw the action unfold almost exactly as the real battle unfolded.

Some special sneak-preview pictures from the test battle!  Just a taste of the action to come!

Just like in the real battle, Green and Sullivan's columns drove the light units back, with both falling back towards the Chew House.

I'll leave you all with a teaser of some of the pictures of the overall fighting, once the Divisions made contact.  it was NOT pretty for either side, I'll say that, but pretty historically accurate I should add.  Enjoy and stay tuned!
I'll post some pictures in the coming days of the custom QRS and unit labels I made which are a bit more streamlined from the original FOH game but will greatly aid play.
You will enjoy these pictures regardless of whether you're a Tory, a Patriot, a Lobsterback, or a "damned rebel"! 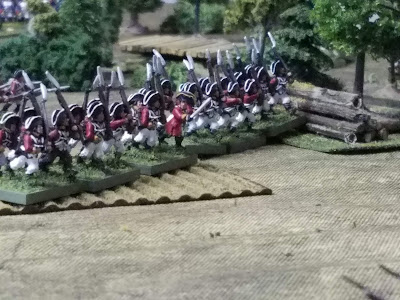 Posted by Disgruntled Fusilier at 11:45 AM