Yesterday I counted my units for Germantown and kept coming up 1 short for the British.  A perusal of my OOB showed that it was the Hessian Jaeger detachment that I was missing - but what to do?  I don't want to buy an entire bag of Jaegers, and a bag of Jaeger commands in 15mm, and pay shipping for a small, 4 x stand unit.  I knew the lead pile would hold the answers.
Bear in mind, there are more 15mm painted and unpainted figures wearing 18th Century Tricorne or Cocked hats in this house than people you saw last month. There are SYW Austrians, Prussians, AWI British, Americans, Hessians - you get the idea.  I found a very convenient 4 x stand unit of "leftovers" from a huge SYW painting commission from about 5 years ago.  I took a number of command, and men in fighting poses that were left over when I was finished with "the big battalions" and based them to serve as light battalions.  This worked out perfect and one of the Austrian light battalions, based 2 to a base, would be pressed into service to become the Jaegers at Germantown!
Button counters beware - you may not wish to proceed any further beyond this point.  Whether you don't want to see the atrocity of turning perfectly good Austrian musketeers into green coated Jaegers, or you don't wish to see the many uniform sins I committed with those Jaegers, just bear in mind desperate times call for desperate measures!!!
I used my favorite green that I normally use for British Rifles and a few other green coated forces, and generously applied it to the white coats, leaving the facings and the cuffs red, and being careful to not paint over the belts, which I left white because it added some color to the units - and NOT because of any historical tendency.  I also noted the coats are way too long, but that's okay because they're 15mm and my gaming buddies don't see all that well! 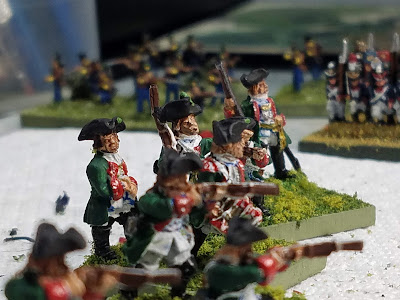 I painted over the white trim of the hats and added a light green cockade to them, as well as some better flock.  I touched up the muskets, trimmed them down by snipping off the end of the barrels and bayonets, and presto - a respectable looking Jaeger detachment who look almost perfectly at home on a battlefield in North America!  Their uniforms are a bit "over the top" for Jaegers, but they'll do.

That is all!  I hope my American readers have a wonderful and safe Thanksgiving day today.  We will be celebrating Thanksgiving today!  I'm thankful for great family and friends, and the ability to continue to game and engage in this wonderful hobby of ours.
Posted by Disgruntled Fusilier at 8:14 AM