Not much posting lately but Ken and I linked up for another practice game of Germantown, 1777 last week using the interesting "Field of Battle 3" rules.  Right off the bat I'll say that FOB3 is a strong contender for the December battle with the interesting, asymmetric approach to "when things happen." I'll admit that while I'm not a huge fan of the non-linear approach (I tend to find comfort in Move-Shoot-Melee!), the game has delivered a very good AWI "feel" to things, and to dispel doubters out there, the cards don't exactly rule when you can do things, but instead provide the commander with interesting battlefield opportunities to either invest in, and the game is chock full of decision making at every turn.

Unlike the last battle, we rotated the table 90 degrees playing from the long edge.  This cuts out the unnecessary approach marches for the Continentals and focuses the battle down to the actual engagement areas, instead of a much larger geographic area.

Sullivan's troops on the Germantown Road make contact quickly, but marching through forested terrain is constricting and they can only deploy 1 regiment at a time.  Their first volleys drive the British lights back and the battle is joined!

So far, so good.  The resulting combats from Sullivan's men bumping into the lights has been satisfactory, and historical.  The lights give ground and the 40th moves up to cover their withdrawal.  Meanwhile, Smallwood's column arrives on the field.

Given the rules for units exiting terrain, Sullivan is having a hard time pressing forward the attack but the initial success in driving back the lights is just too good for this wargamer to ignore and I press on with the lead regiment!

The British Guards and Smallwood's Militia Columns find themselves on a collision course similar to the real battle and there will be a fight!

An interesting note here - we did NOT model the effects of the buildings within Germantown to have any influence on the fighting - they are really just to show the location of the town.
Smallwood's militia men while marching towards their objective are suddenly and violently ambushed by the British Guards in column!  Very bad news for their lead Regiment, which suffers greatly from the excellent British volleys!  The lead regiments melts away and runs into the woods to the north!  Smallwood escapes numerous brushes with death rolling extremely close to kill him in the ensuring checks! 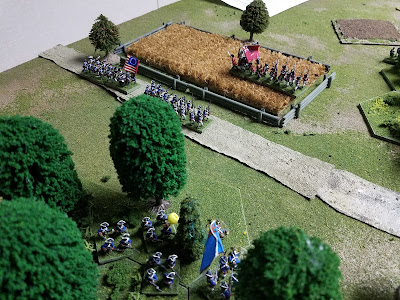 At this stage, we've played a scant 2 x turns but the battle is unfolding historically at this point where contact is made by almost all of the columns, with Sullivan's column joining battle first.  Again, while I'm not a huge fan of the non-linear approach of Field of Battle, I do really like the combat mechanisms and the simplicity of resolving fire and melee.  Big win in my book.

Meanwhile, Ken moves up the British left Division to contest Sullivan's approach.  While Sullivan's lead regiment is pretty beat up, more Regiments are approaching and are committed right out of the march. 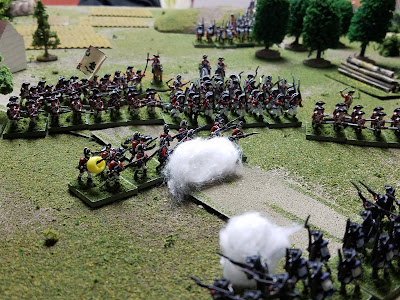 The fighting in front of Greene is tough - the British hold their fire until the right moment and a furious number of volleys completely spoils the initial Continental assaults east of Germantown.  It's a tough spot and eventually Greene's lead 2 Regiments route and are sent packing!  A tough day for the Virginians indeed! 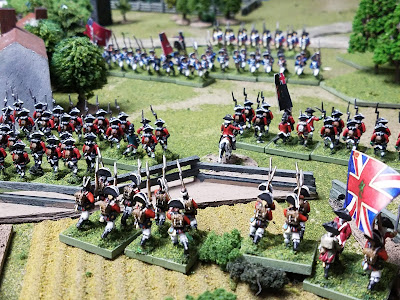 And Darren - this is for you - for if I recall a FOB AWI game you played, the Guards were handled roughly by a militia regiment or two.  The same thing begins to happen here, where Smallwood's columns, raw though they might be, turn to fight the Guards and unleash a number of volleys against the Regiment in the wheatfield.  The Guards Regiment is handled roughly by their fire!  Ken's assault against them is also beaten back! 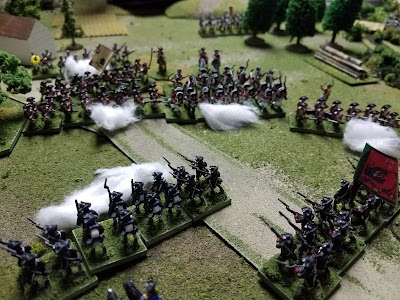 So we completed roughly 3 turns of Field of Battle 3 with a serious eye towards using these somewhat unpredictable rules for our Germantown MEGAGAME this December.  So far, I'm very happy with the table setup and feel like focusing on the actual battle area is probably the way to go for this game.

I've enjoyed Field of Battle much for this type of warfare and appreciate the role of the officers and all of the decisions to make.  I will say you really need to be clever when both shooting, melee'ing, and deploying, and you need to have a plan.  Had Greene's men held their fire a bit longer, his column may not have been in the predicament it's in now.  Today we will meet to finish last week's game and I aim to play the same battle with Black Powder next week during the long weekend.

Preparing for Germantown has been a huge project with much reading, research, and more importantly playtesting!  But we're up to the challenge and I'm heartily looking forward to more and more Germantown with my team.

Also - many thanks to Alex for providing what I have to say is one of the best maps on the fighting at Germantown I've yet seen. They are from McGuire's Volume II of The Philadelphia Campaign and they are a wonderful resource for the wargamer.

Tune in as we continue to experiment with rules and ideas for recreating this huge AWI battle in all its glory!

Posted by Disgruntled Fusilier at 9:33 AM