Building & Table WIP: Paying Off? You be the judge!

As promised, here are some gratuitous pics of my buildings progress.  The Sweney House, which deviates a little bit from the real thing that still stands today as a popular restaurant, and a generic AWI/ACW rural farmhouse that I cannot wait to use in my games coming up.  You can also see a little bit of the tree work that was done and the new felt mat.

THe houses aren't yet finished, but they're getting there.  I still need to build chimneys for both houses, although on the farm house you can make out the stack of the chimney and fireplace structure peeking out from the other side.  They're match sticks that haven't been painted yet. 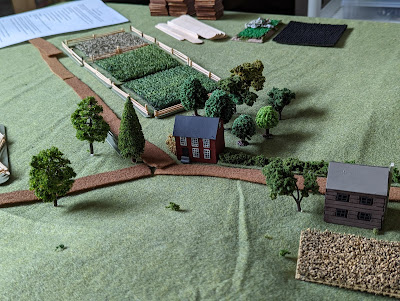 Still need to paint the fences (even as I build more and more!) and get some stone fences built.  My next big step is to build a bunch of foam hill shapes, including a 4' wide ridgeline and a bunch of other hills.  I basically need enough ridges and hills for Day 1 of Gettysburg, and at the very least the Teugen-Hausen 1809 Napoleonic battle.

That, along with spraying "fields" onto the mat will take up some time and I fear it's still a little bit of a ways until a grand ACW bash, but we're getting there. 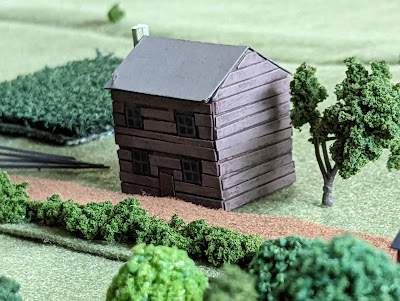 As mentioned in a previous post, I'm working next on the Codori Barn, the McPherson Barn and numerous other houses and that should complete my ACW building kick (IE Dunker Church is a must-have).  Next up will be 10mm Napoleonic buildings/townhouses and German timber-framed houses as well.  Lots of ideas in that department!  This terrain is pretty much perfect for 6mm and 10mm, and will be great for Brigade level games like Fire and Fury where the brigades are about 6 inches to 12 inches wide and need space.  These buildings also ensure a single barn isn't the length of an entire division on the table!

Lots more cool stuff coming up so stay tuned everyone.  I'm chomping at the bit to get my next wargame in and the choices are many.  I'm almost done rebasing my ancients collection and will post a pic of them in the coming days for a game of "Age of Hannibal" or even "Commands and Colors ANcients".

No posting activity but that doesn't mean we've been idle here in the SOUND OFFICERS CALL gaming bunker.  Far from it.  I've been working on new terrain concepts here and after a recent trip to Gettysburg, have been motivated to get back to finally finishing my ACW project.  I have literally hundreds of painted 15mm troopers awaiting rebasing from a massive 2017 convention purchase.  Add my recent foray into 15mm Ancients and I have a whole heap of blog topics to share.

I've never been quite happy with my terrain system.  It hasn't been convincing to me, so I felt it was time for a change.  First up?  Trees.  Trees are an essential part of any wargamer's battlefield.  I have lots of trees in all shapes, sizes, and brands, all based on thick wooden stands.  I remembered a LittleWars TV video featuring trees with PINS drilled into the bottom and thought about incorporating that onto my table to make it look a little nicer.  This was a bunch of work, and wasn't as simple as just putting pins into the trees.  First up, my wargaming table has a new foundation....

Lots of snipping, drilling, pressing, and gluing later, I had a bunch of trees with pins in the bottom.  How did they turn out?  I'll let you be the judge. 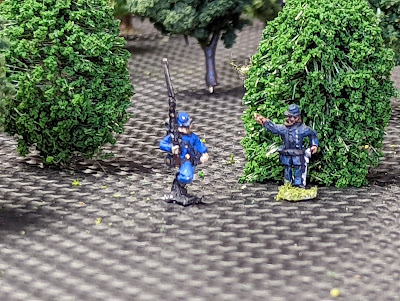 So with all of the trees done, I watched some of the Littlewars ACW videos for Antietam, Gettysburg, and Bull Run for more ideas.  The gaming surface was my next big project.  The Cigar Box Battle mats I have are beautiful, but I never liked how they "draped" over hills.  I wanted to see what the LittleWars guys did for their beautiful tables.  The following videos were extremely helpful for ideas:  Bull Run.  Ravenfeast Terrain Video.  I ended up buying a felt mat that was roughly 6 x 6 and it worked wonderfully.  I like its thickness and how it drapes nicely over the hills.

For the mat, while I'm happy with it, I'm going to lightly spray paint some tan "fields" and darker green "fields" into it, and also put some light browns on it as well just to break up the "golf course" look on it.  That brings me to my next terrain enhancing project - buildings.
The Buildings
Another battlefield essential are manmade structures.  At least in my house they are!  Most of the places I'm fighting over are loaded with people and their dwellings.  So I needed better buildings.  Gettysburg seemed like a great place to start.  Instead of just buying everything, I figured I'd start my search at home.  My plain, boring, out-of-scale wooden craft houses were perfect places to start. 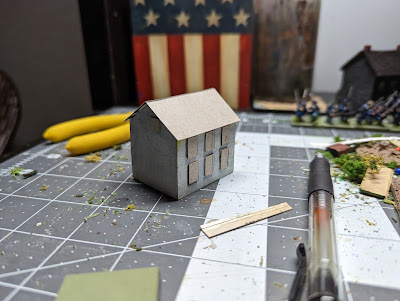 Coming up I'm going to kit-bash the famous Codori Barn as well as the McPherson barn.  (and have been eyeing up some of my wooden craft houses which are stories taller to make European townhouses - perfect for Napoleonics in 10mm!) These buildings will be literally perfect for playing games like Fire & Fury and Age of Eagles, with their large brigades of 15mm troops.  Played with 15mm scaled buildings on the table looks ridiculous and the McPherson Barn is literally 2 x Brigades long!  These will look much more in scale next to the long lines of troops.  Anyways these buildings are perfect and will still look perfect with 10mm troops.  I've begun painting this and I'm going to detail the windows, add a chimney and presto.  Sweney house circa 1863!  Will post pics when it's finished.
My next project was to make a clapboard house but I ended up making a more rural farmhouse modeled after very old farmhouses I've seen in the Appalachian mountains.  This will make a great AWI farmer's house or ACW farmer's house and smacks of "he built it with his own two hands". 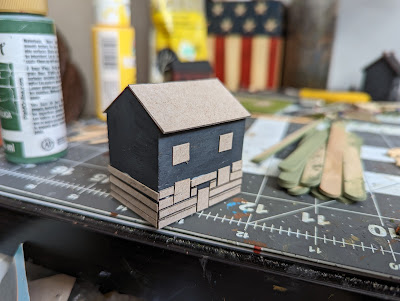 I'm painting the farm house a more rustic brown dry brushed with a sun-worn grey green.  Once done, it's going to look awesome.  And speaking of awesome, no ACW battlefield is complete without fences.

Ancients Update
Finally, an ancients update.  I've been slowly rebasing my 15mm Ancients for "Age of Hannibal" since it is one of the simplest looking Ancients games I've seen.  Happily, the 40mm squared base size will work perfectly for my Commands and Colors 2 inch hex mat games, and 2 of the 40mm squares adjoined will work for "Hail Caesar" and even "Soldiers of Rome".  My "blue" Legion is done and the "red" Legion is being based now.  I have hundreds of auxiliaries and lights to base, as well as archers and shirtless Gauls to paint up but the important thing is - the Ancients project has finally gotten underway! 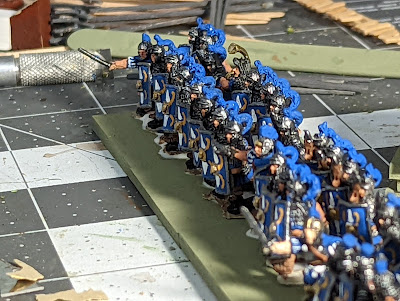 Finally, you can see what my Friday night plans consist of!  These fellows will have their feet soaking in water all night and will be rebased tomorrow on my standard 1" squares for Fire & Fury.
So lots of activity and I wanted to post on what I've been up to around here.  A lack of posts definitely does not mean a lack of activity!  Lots of gaming goodness hopefully coming up even if it's solo!  Stay tuned.
Posted by Disgruntled Fusilier at 5:39 PM 12 comments: