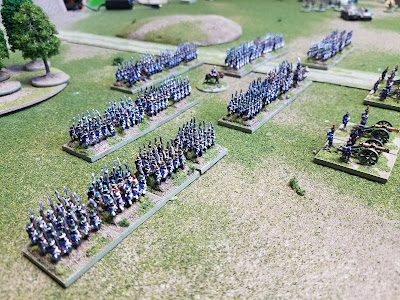 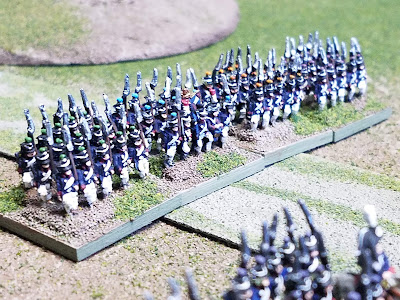 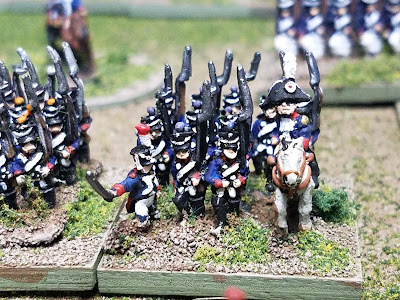 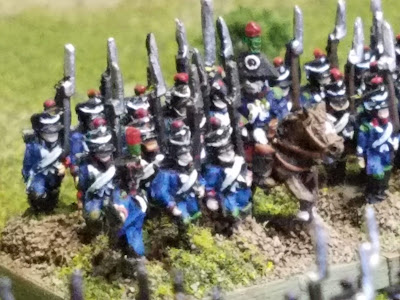 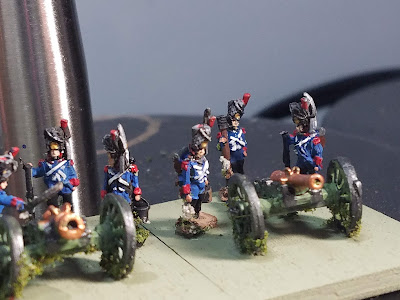 Ken hosted a game of "Soldiers of Rome" with his gorgeous 28mm Romans and Barbarians yesterday and invited me to command the Romans (more on this in a bit).  As the pictures will attest, it was quite a spectacle! 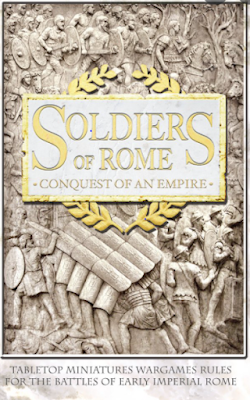 Many of you who have followed my blog over the years know I'm a Warwick Kinrade fan as I appreciate his practical, no-nonsense and authenticity approach to rules.  Playing something other than a 20th century game written by WK was instantly appealing.

This past week, Ken sent me a rather macabre picture featuring 28mm Wargames Foundry Germans holding the head of a former Roman Soldier.  I believe this is a set you can buy that serves as a command stand, or objective.  I immediately wrote him back "Claudius!  No!"  A storyline was born.  Ken sent pictures of beautifully painted 28mm Roman Centurions swearing vengeance for Rome.

Claudius' death must be avenged.  Perhaps this was done to bait the Romans into war after the uneasy peace along the Rhine?  Time to send the Legions back in.  Or would the Germans pre-empt Rome by crossing into Gaul?

Soldier of Rome (like its predecessor, Soldiers of God) has you select your battle plan, which enables enduring "orders" or battle cards that stay with your force throughout the game.  These interact with your play choices in an elegant way without becoming completely and arbitrarily card-based.  It's actually a genius mechanism.  Anyways, I selected "All Out Attack" which gives me an initiative value of 3.  My left battle's card is "March", my center battle's card is "Charge" and my right battle's card is "March."

A few things about game play that I liked were the dead simple mechanisms in the game and the grinding, attritional nature of the combat - exactly how an ancient fight would have been.
Probably the most complicated element of the game is the card management and that starts to click after a few turns.  It's not necessarily as rigid as Commands and Colors, but definitely has some familiar feels to CCA.  Your "battle" cards, that is the cards belonging to each battle based on your mission, are enduring and with that battle each turn.  You also draw 4 random cards that allow other actions.  You can always "burn" a card and reduce a disorder.
Disorder is also clever.  It doesn't have bearing on combat, but accumulate enough and your unit will run, lowering your army morale by 1 (similar to the Battlegroup morale breakpoint chit pulls).
Combat was first joined in the center by German lights and my mercenary lights.  The rolls are simple and straightforward.  Movement is also not fiddly.  Note I did not say generous - just not fiddly!  My Romans moved 3 paces per turn!

Soldiers of Rome has some neat tricks in addition to the combat - you can select "Events" and do cool things like send your light cavalry out on flank marches.  Ken does precisely this and after a few turns sweating that they might "get lost" and not arrive, sure enough they arrive as my line is solidifying.  Ken sends them charging into the rear of my center battle!
Here is where I found out how tough and lethal the Roman cohorts are!  Hitting on 2+, the Romans are nasty in combat.  Though slow and inflexible, they are extremely tough in combat!  Eventually Ken's horse are sent packing and Stephanus (me) must rally off disorders.
By the way, I like the way combat is handled with the dice "to hit" numbers remaining the same.  advantages add dice (like charging an opponent in the rear garners you 3 additional to hit dice)

On my right, a Gallic village is worth 2 morale points if Ken can seize it.  My cohorts will have something to say about that!  Ken's crazed berserkers are supporting his lights in front!  Also there is a cool rule with the Barbarians whereby if your Chieftain is not fighting you have to pass a "fealty" roll or something like that or lose a morale point for your force!

I feel like things are going pretty well until Ken's main attack develops and thousands of screaming Barbarians stampede over the hill in front of my Auxilia... 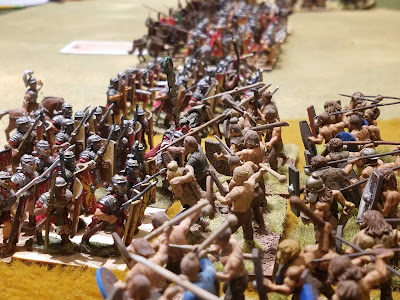 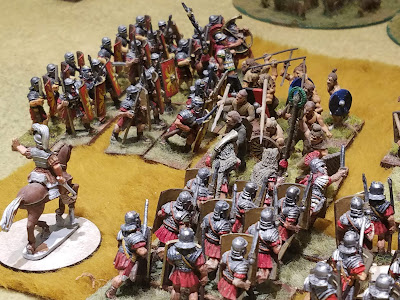 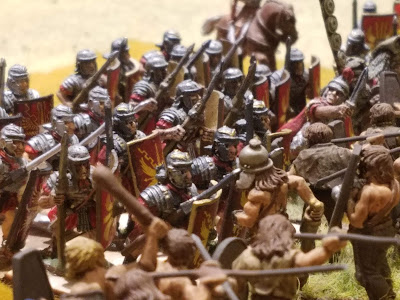 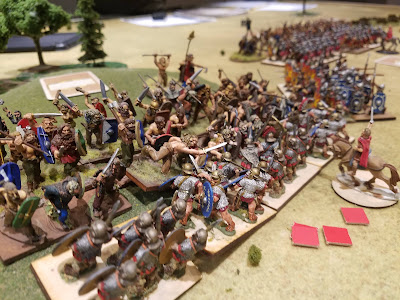 I hope you enjoyed reading about this battle as much as I enjoyed participating in it.  Ken's breakpoint reduced alot more quickly than mine but he had Barbarians and I had Romans who are twice as expensive, points-wise.  This game really checks all of the boxes for me as far as an Ancients game is concerned.  I loved the grinding, attritional combat, the morale, and the cards are a neat and elegant way of adding extra spice to the game.  This was both Ken and my first game and we finished in 3.5 hours without too much looking up things in the rules.

The rules were extremely entertaining and packed with surprises which I really enjoy (one of the reasons I love the Commands and COlors series of games - because there are lots of surprises).  I would like to purchase the Crusades version, Soldiers of God, if I can find a copy.  Could this finally be the rules set to get me into 28mm?  Time will tell!  For now, I have boatloads of Romans and Barbarians in 15mm and I'm continuing to base them on single-unit stands for Commands and Colors!

All in all, an outstanding game, conveniently packaged into 3.5 hours on a Sunday afternoon.  I'm definitely going to be playing again, and I'll definitely pick up "Soldiers of Napoleon" if they're anything like this!

Reports of my demise are greatly exaggerated

If by some miracle you noticed my absence from the blog-o-sphere the last month or so you're in luck - I'm here and am alive.  Im also continuing to paint miniatures and even occasionally throw some dice around. 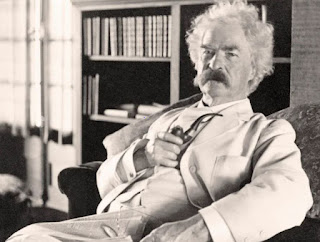 The tempo of "regular life" has been brutal this autumn, with real life events taking center stage.  You know what I'm talking about.  Soccer games, kid horseback riding lessons, violin practice, work, chores, family events, etc.  None of these things are bad, mind you, but they don't leave much time for blogging about gaming.  Untangling this messy calendar to find time for gaming has been a gordian-knot of a challenge but we still found a way to make it all work.

Over the last month I'm pleased to say I participated in Jon Freitag's epic Brandywine virtual game commanding Sullivan's Division, attended Historicon 21 in-person (picking up some sweet German armored cars in the process), and finally was able to visit Bryan L's house, refighting the entire battle of Antietam on a Friday afternoon with his outstanding mash-up of Battle Cry and Hold the Line, all on a massive, blown up SPI map with thousands of 1/72 figures!

This weekend also saw a return to in-person conventions with me stopping by Historicon with Dave in King of Prussia.  I'd like to post more about that but I didn't play in any games and really wasn't feeling up to being there.  I ended up giving my $25 dollar voucher to Dave and all I really wanted to do was watch the Flames of War tournament games.  The company's custom "tournament" boards are absolutely out of this world beautiful.  The pictures dont do them justice. 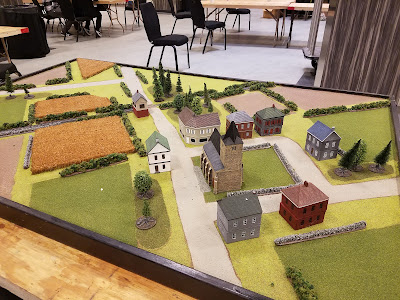 And finally, big changes coming to my Napoleonic Eylau project and I saved the absolute best for last.  I ripped all of my III Corps Blucher-based troops up.  You read that right.  I made the decision to make my basing more universal.  As much as I love Brigade sized stands, I can't use them properly with all of the rules I enjoy and so it was time to remedy that, once and for all.  They are going to be permanently based on 30mm square bases.  I've also decided on a rules set for the Eylau project but you'll have to stay tuned on what that's going to be :) 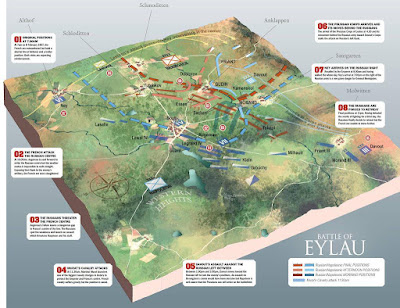 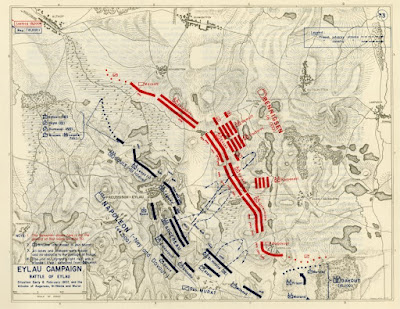 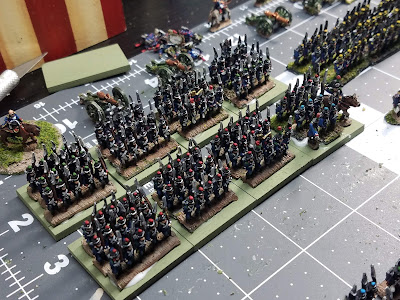 Working on Davout's Corps first - then onto Soult's and Ney's.  Huzzah!

Posted by Disgruntled Fusilier at 11:28 AM 19 comments: