Well not much gaming or painting going on but I was able to finish flocking all of my Soviet stands to include WW2 for BATTLEGROUP, and Modern Soviet and Bundeswehr stands for SABRE SQUADRON. 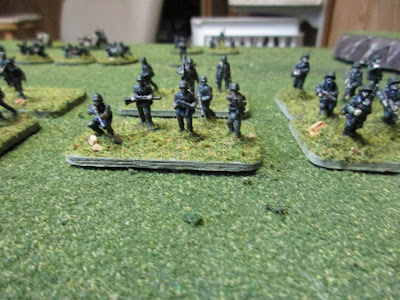 So there you have it.  A summer's worth of work and now all my World War II Soviets and Wehrmact Germans have been based.  All told, about a small Company's worth of troops for both sides, depending on the rule system used.

Now onto the Bundeswehr troops for SABRE SQUADRON.  Finally have these troopers flocked.  These are Command Decision US Paratroops and Vietnam range miniatures painted as West Germans. 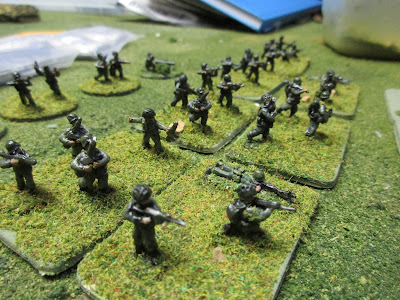 And onto the Soviets... 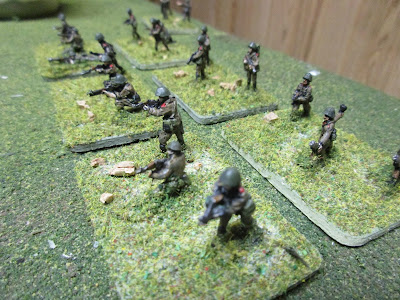 And now onto some aircraft!  Here in its early stages is an unfinished Hind-D Gunship that will be used for my modern games.  I am going to order 2 more of these babies.  This is from the Zvezda "Hot War" collection.  I am so impressed with this scale that I ordered a MiG-23, SU-22, and SU-25 1/144 model from Amazon.  Air power for my SABRE SQUADRON games!!

Okay here's a question - should I paint the underbelly and weapons stores or leave them camouflaged?  That's alot of work...

Also, I'm all ears if anyone knows of a good 1/144 MI-8 model.  The "Eastern Express" models are EXPENSIVE! 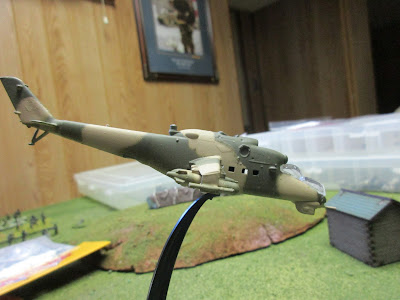 Also, here's another little gem.  This is the Zvezda Stuka dive bomber from the "Art of Tactic" game that I am repurposing for BATTLEGROUP among other WW2 rules.  I will drill out a hole in the underbelly and affix him to my usual aviation bases.


The colors are off, but I refused to buy 21 dollars worth of spray paint just for 2 models...
So this is based in rustoleum dark olive and light olive.
And last but not least, another "4Ground" building assembled.  This is the "pig stye/chicken coop" combo and for scale I threw in some recently completed Khurasan Napoleonic light infantry!  Enjoy! 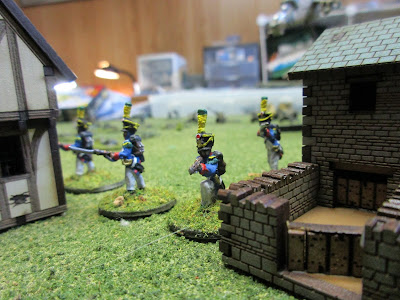 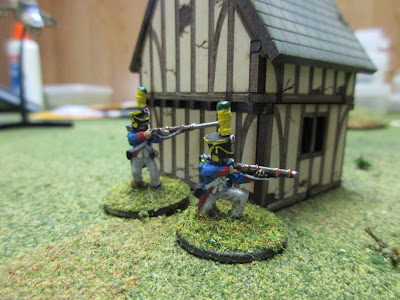 Ken and I recently finished a Sabre Squadron game with Ken's BAOR British and my Cold War Soviets.  That's noteworthy because we actually played a full game to completion and I'm also getting around to finally blogging about it!

Game was played on Ken's excellent table with his scenery.

We played the same scenario (planned attack)  from our last Sabre Squadron game, but on a much bigger table (about 8' x 6' this time I think?).  My Soviets consisted of 2 x T-80 tank platoons, an infantry platoon mounted in BMP-2s, an infantry platoon mounted in BTR-60s, and a recce team and AOO (FO for the Americans in the room) mounted in a BRM.  I had a battery of 122mm SPA on-call as well as 2 echelons of artillery for a pre-assault bombardment.

Ken's forces consisted of a Chieftain platoon and an infantry platoon mounted in FV-432s along with elements from the Battalion Anti Tank company cross-attached to Ken's force.  He also had a recce Scimitar attached to his force as well, making for well-balanced and pretty solid force.

We randomly set the terrain up and realized after the fact that we should have assigned objectives before-hand per the book, so we decided on using the village as the Soviet objective.  (single objective mission).

I was very happy with the terrain setup and thought it looked very "northern German" with open flat areas and many wood copses.  A few hills but not too many...
Plan is pretty straightforward.  Right up the middle and see what sticks!  I'm hoping the BMPs can provide adequate fire support for my infantry dismounts on the right.  The tank platoons in the center need to keep Ken's Chieftains busy.  And as the game progresses they sure do - Ken is busy killing T-80s! 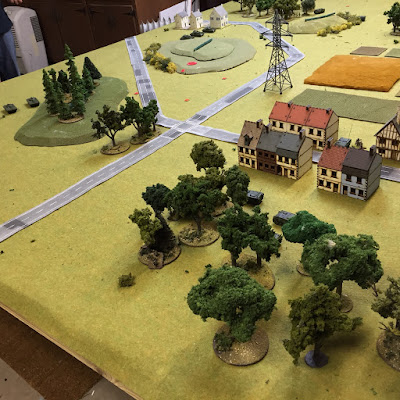 The first turn sees my tanks on "transit speed" and my BMP infantry transiting as well.  The BTR mounted infantry move up to the woods and dismount.
From the pictures you can see the attack develop.  The advance-guard commander is happy surveying from the hatch of his tank.  Overhead the artillery starts to plaster the treelines, hilltops and anything else that could be hiding British infantry. 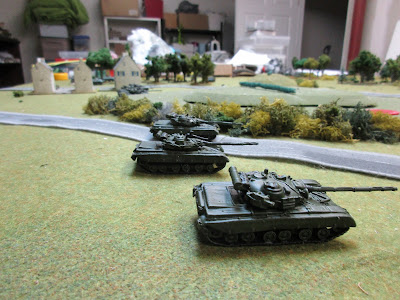 After the preliminary bombardment, Ken's Chieftains and MILAN teams start to take their toll on my advance.  I lose a T-80 and a BMP gets a "dodge" marker for swinging fast to avoid a missile.  The poor guys inside....

Ken's mortar barrage is laughed off by the T-80s but the BRM carrying my artillery observers is knocked out and the passengers inside are KIA.  Big trouble for me as the 122mm artillery waiting in the rear would remain silent throughout the battle.... To be honest I never expected that to happen. 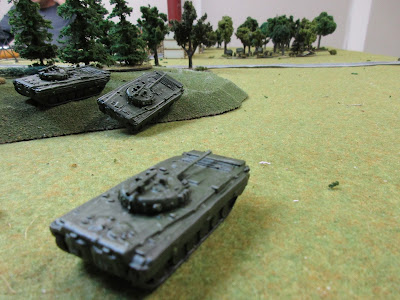 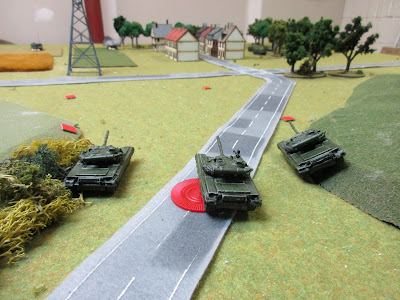 So on the right, a different approach is attempted as the BMPS start leap-frogging towards the treeline to dismount.  1 BMP would cover fire with its 30mm autocannon while the other dashes forward at transit speed.  It's a little reckless but time is of the essence.

On the Soviet left, I really underestimated the Scimitar's autocannon as it slices through my BTR and kills the crew and passengers.  That would have been really ugly to witness in real life I think... 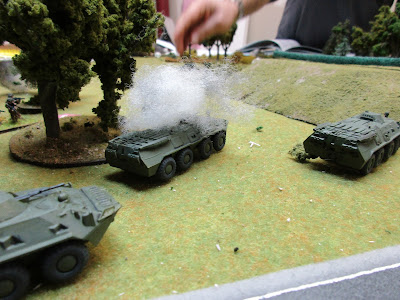 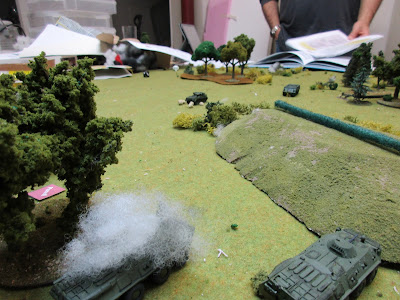 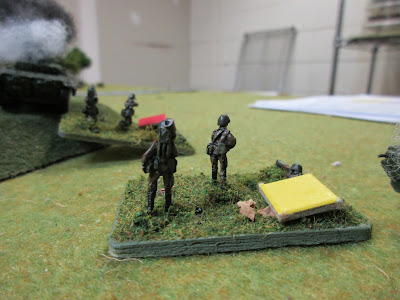 Okay here's where things started to go really, really badly for the Soviets (ok aside from losing their company commander...).  The right T-80 platoon takes a casualty, and completely bombs the morale check, going from normal or good morale all the way to "withdraw."  That's 3 straight below 5 rolls in a row.  They must pull back behind the hill and that's almost a whole platoon out of the fight.

Ken had an infantry fireteam in the woods on my right who felt that this was the right time to peek out and "make it rain" on my advancing infantry!  They score a suppressed result and my 14.5mm return fire from the BTR has absolutely no effect, failing to score a hit. 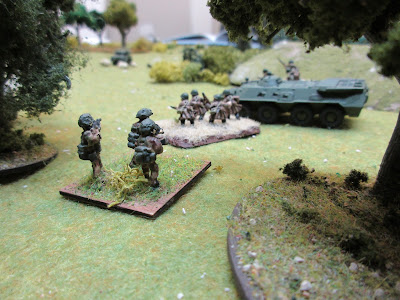 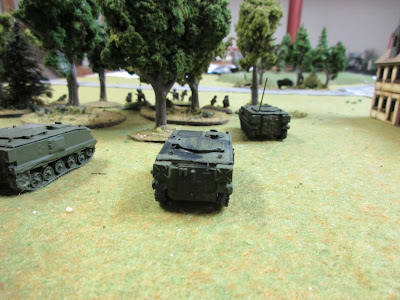 The last ditch effort by the Soviets is mounting up the BTRs and trying to race like hell to the village.  Unfortunately they'll never make it in the allotted 3 turns remaining so as the Soviet commander I called the game.  It's impossible for the Soviet forces to win now, as the distance to the village is too great and there are only 2 Soviet turns left.


LESSONS LEARNED AND THOUGHTS
Well another great game of Sabre Squadron and I definitely learned a thing or two about the game and the rules after a good nose bloodying like this.

The author is definitely trying to make a point about moving along a covered and concealed route.  For one thing, if you are playing with tanks that have a large difference between their firepower and armor, then even the variable protection roll will not help you.  This ensures a hit is a kill and you would be well served to remember that your vehicles, especially the more vulnerable ones, should take advantage of cover and/or concealment at every available opportunity.

My BMPs got shredded by Ken's MILANS for that reason and I believe they should have utilized a more tactical movement scheme from the beginning.  (leapfrogging).

As far as the armored advance, my initial plan was to give those tanks something to contend with while my infantry advanced on the objective.  Well they melted away much quicker than I had anticipated.  Frankly that morale failure of the tank platoon at the crucial moment helped seal the fate of the whole unit's advance.  So sitting still and trading shots with the enemy is not a good plan, it turns out.

I believe the trick in Sabre Squadron is fire & maneuver.  Firing, then displacing to a new position, and maintaining the advance is important for victory if you're the attacker.  (and that point could also be argued for the defender as well by shooting and moving your AFVs).

Infantry should be used aggressively as they are very well armed (1 squad of 2 fireteams armed with a modern rifles, and 2 SAWs gets 4 fire dice and if they have some kind of RPG the enemy cover save is less likely to pass.)

Use a covered and concealed route where possible.

Suppress or Neutralize the enemy before moving into his kill areas.

If you're the attacker, you shouldn't take more than 1 shot from the same location.  If you're the defender, maybe 2 shots if you can.

Protect your command elements and forward observers!  (I really could have used that 122mm Battery...)

Use your infantry weapons.
Posted by Disgruntled Fusilier at 7:44 PM 15 comments: