World War II month grinds on with some more solo gaming in the gaming bunker last night with me finally putting a "proper" game of Rapid Fire Reloaded on the table!  I've been wanting to do this since the rules came out! 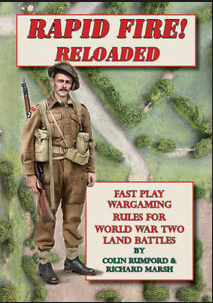 I used a quick "out of the box" scenario from the Neil Thomas "One Hour Wargames" book - an old staple of mine - Scenario #4 "Take the High Ground."  Rather than use large amounts of figures and a "proper" OOB, I diced in the NT forces generator and rolled up 3 German infantry units (8 figure companies now!), 2 mortar units (a battery!), and an armor unit, a Panzer IVG Troop!  The Soviets have an infantry-pure force with 4 infantry companies, an AT battery, and a mortar section.  Can the Germans take the high ground?  Germans have 33 total figures and the Soviets have 37 total figures.  BP is 50% of those figures. 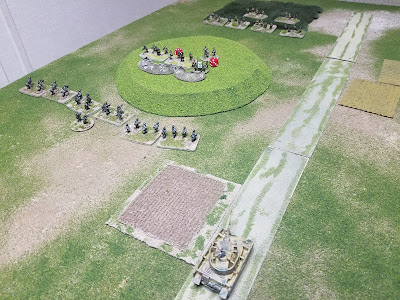 Soviet rolling is abysmal the entire game with their AT gun constantly missing the panzer IV, and their infantry failing to hit the broadside of a barn.  Even the mortars consistently fail to zero in on their targets...

The Germans march up - the Battalion in line, manuevering under fire with the panzer platoon and mortars providing a steady stream of fire support!  The Germans reach the base of the hill easily in 3 turns and prepare to assault the Soviet positions!  Meanwhile the Soviet Battalion in reserve steadily makes its way up to reinforce.

The Germans win both engagements and the Soviet infantry company breaks off and retreats.  RFR has a slightly different system from RF2 it's big brother.  Instead of a D10, the defenders, roll a 1D6 and add2 to the result.  Not nearly as potentially dramatic as the D10.  The attackers

It's tense but the Germans prevail again (this was almost totally due to luck and the fact that the Soviets were slightly attrited on their way into the assault by the German mortar battery and some great shooting from the panzer troop. 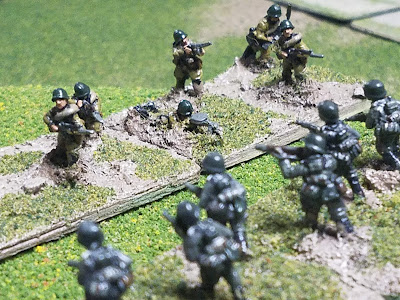 The Soviets reach their breakpoint easily and fall back the prescribed distance.  It's over, comrade! 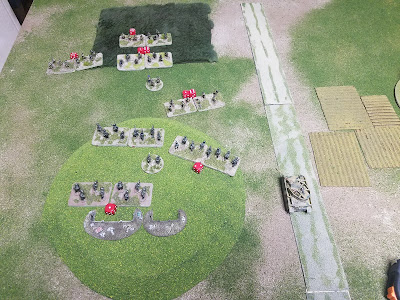 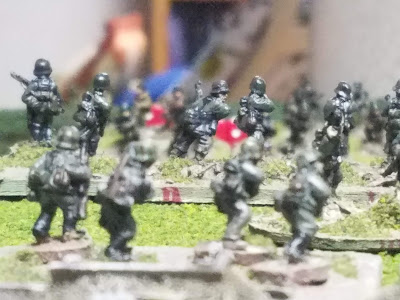 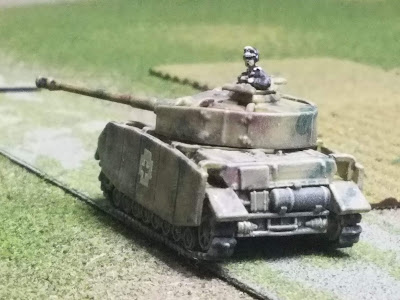 Like I said, the Soviets had abysmal dice rolling for the entire game with many volleys scoring zero hits and the Germans for whatever reason scoring extremely well.  That and the 2 x tube mortar battery really racking up the kills.  This game had no heavy weapons except for the Soviet AT gun and the German mortars and the tank platoon.  I think if there would have been some added HMGs in there, you'd definitely see the need for smoke.  I also did not play with ambush fire for this game but will likely do so in another "training scenario."

It's always refreshing to see when rules authors listen to their gamers.  I belong to the Rapid Fire facebook group and I have to say I'm seeing many of the changes recommended by gamers on that group over the last 5+ years and those changes seem to have made the game run even more smoothly and more quickly (that's saying something because it already was a fast game).  Granted, the very small rulebook leaves you to figure some things out for yourself (just how IS an AT gun taken out?  Kill all the crew and that's it?  I seem to remember RF2 had rules for that) but the authors seem to have put very much thought into weeding out extraneous text and focusing on the rules that are important.

Small Arms fire is much better now with multiples of 2 firing 1D6 and a simple to-hit chart that accounts for range and terrain.

Also the cool rules for HE are still there and work even better now.  Artillery is easier to call in with your radio check failing on a "1" now.

In my book, these rules score extremely high in tactical flavor, effectiveness, and give a very fun game.  They are definitely "mega game" worthy and I want to put them through their paces even more with some historical scenarios.

I do get that people dislike the bathtubbing, but there is something fun about basing your toy soldier OOBs off figure counts and battalion/brigade strengths, replicating neat support vehicles like radio vans and Artillery OPs, and having command posts on the table.  I will definitely play these again and once we've played enough Flames of War, I may put some RFR games on for my group!

Posted by Disgruntled Fusilier at 7:56 PM